Accessibility links
More Companies Encourage Workers To Volunteer, On The Clock A growing number of employers are paying their workers to help out at local charities on company time. Human resources experts say compensating staff who put in volunteer hours makes for more engaged workers — and lower turnover. 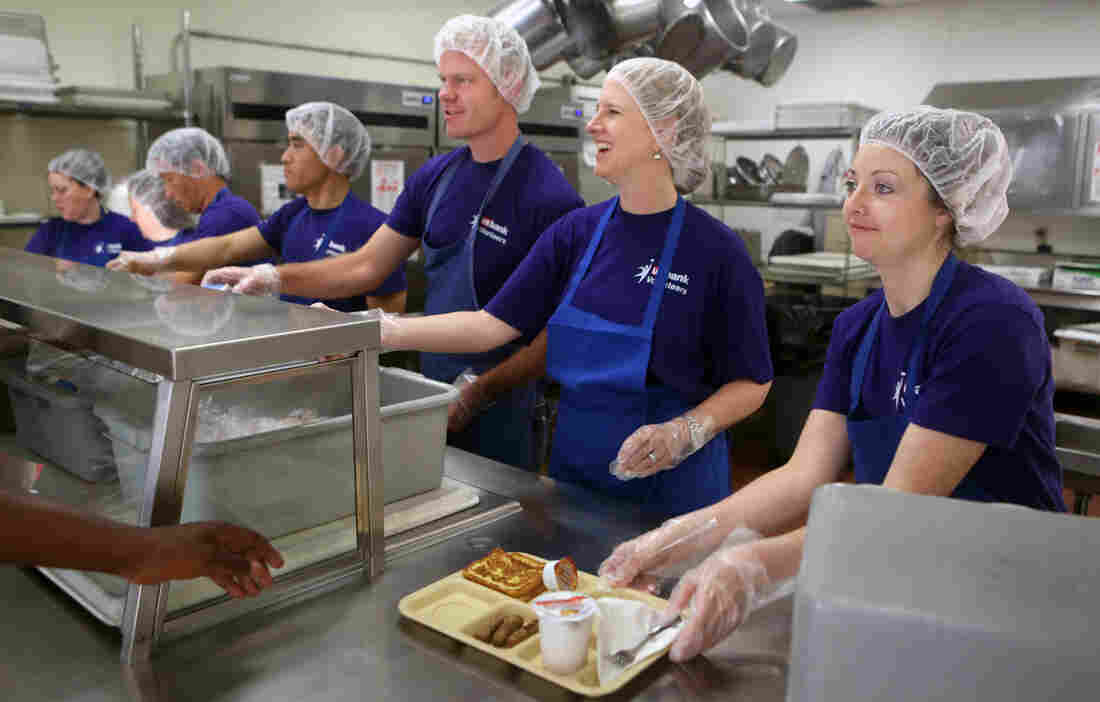 Kristin Yentes (right) and other volunteers from U.S. Bank serve breakfast to diners at Catholic Charities Opportunity Center in Minneapolis. Workers from the bank have been volunteering with Catholic Charities for more than a year. Jeffrey Thompson /MPR hide caption 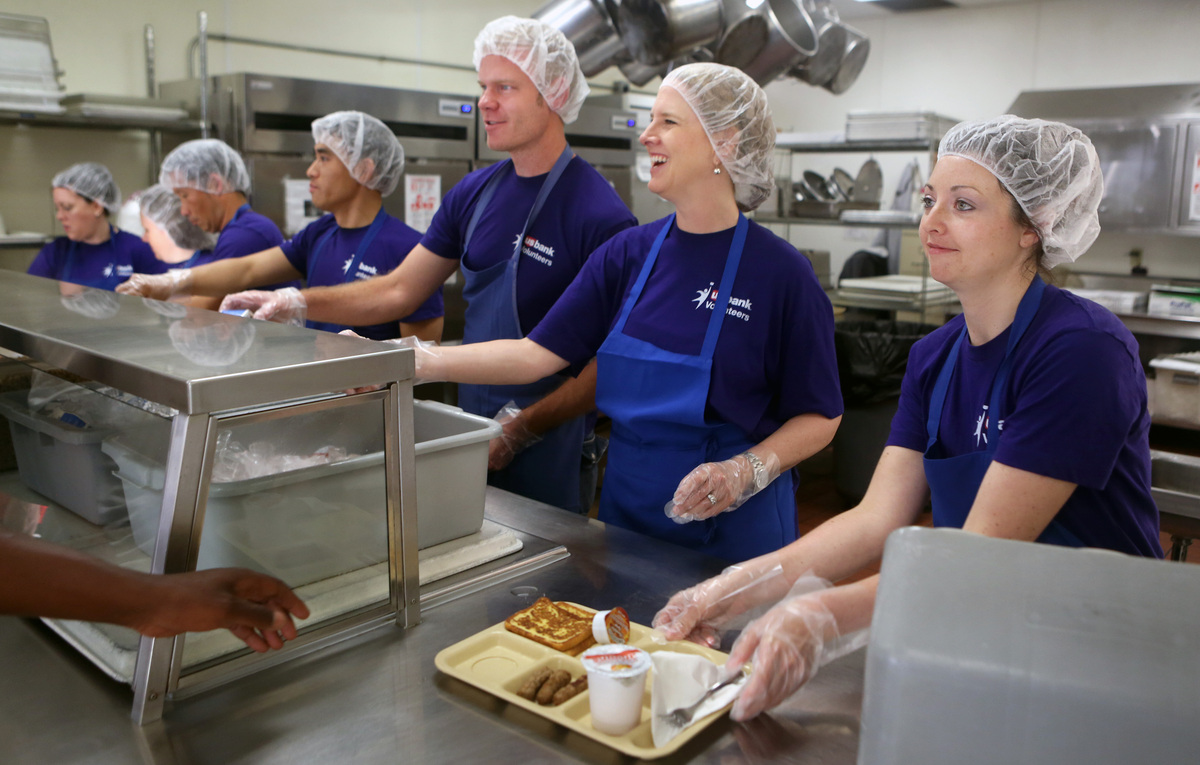 You're not likely to find many bankers wearing those old stereotypical green visors these days. But at U.S. Bank, some employees sport hairnets — at least when they're serving breakfast.

Every Friday morning, a group of U.S. Bank employees stands elbow to elbow at a Minneapolis soup kitchen, doling out French toast, sausage and other breakfast goodies. Most of the people getting free breakfast are homeless men who lug their belongings in plastic bags.

Lisa Eriksson manages vendor relationships for U.S. Bank, but on this day she's the French toast lady. If the bank didn't give her this opportunity, Eriksson says, she'd never volunteer.

"I'm a mom — a full-time mom and work full time. And so, having this added into my day has been a great thing," she says. "When we start seeing the faces of the people we're serving, everyone's very happy and grateful. It's a very human side of it. It's pretty emotional."

U.S. Bank employees can draw up to 16 hours of pay per year for doing things like serving breakfast to the homeless or reading to kids, and this kind of thing is happening at lots of other companies nationwide.

Every year, the Society for Human Resource Management surveys employers about the benefits they offer. This year, about 20 percent said they give their workers a bank of paid time off specifically for volunteering, up from 15 percent in 2009.

"Companies love to have their employees believe that they're engaged in meaningful and important work," says Jeffrey Pfeffer, who teaches organizational behavior at Stanford University. While it may seem odd that companies would let workers volunteer during office hours, he says, consider that the legal profession has done it for years. It's called pro bono work, and it gives lawyers the chance to pursue cases with social impact.

"Studies of the legal profession show oftentimes that the pro bono work is the work that people enjoy the most, and therefore, I think, helps law firms retain lawyers," Pfeffer says.

Ideally, people's daily work would be fulfilling, he adds. But if that's not the case, volunteer programs can help make workers feel more engaged — and keep them from quitting, which is costly.

That's a big deal at a time when many employees are unhappy with their jobs. A recent Gallup report concluded that 70 percent of full-timers in the American workforce feel disengaged.

Keeping Workers Engaged — And On The Payroll

You might think the simpler way to placate those workers would just be to pay them more. But Jason Averbook, a human resources consultant with the firm Appirio, says "fun" often outweighs pay.

"If I like what I do, I'm excited about getting up in the morning, I like the people I work with, I'm gonna stay, even if my merit increase is not what I expect it to be," Averbook says.

U.S. Bank says employee satisfaction and enthusiasm have never been higher, though it's unclear how much of that can be attributed to the bank's paid volunteer program.

Back at the soup kitchen, Eriksson says the program does make her feel more connected to her employer. "It's really a nice thing to know that the employer you work for is so invested into the community," she says. "It feels very good."

And for the bank, it costs a lot less to let Eriksson help out the homeless for a day or two per year than it would to replace her if she quit.