Accessibility links
Movie Review - 'Ain't Them Bodies Saints' - Wishin, Hopin', Planning And Dreaming, Even In Extremis David Lowery's Ain't Them Bodies Saints pictures what happens to a young couple when the bleak reality of their life means no second chances — only a slow march to a foregone conclusion. (Recommended)

Wishing And Hoping, Planning And Dreaming, Even In Extremis

Wishing And Hoping, Planning And Dreaming, Even In Extremis 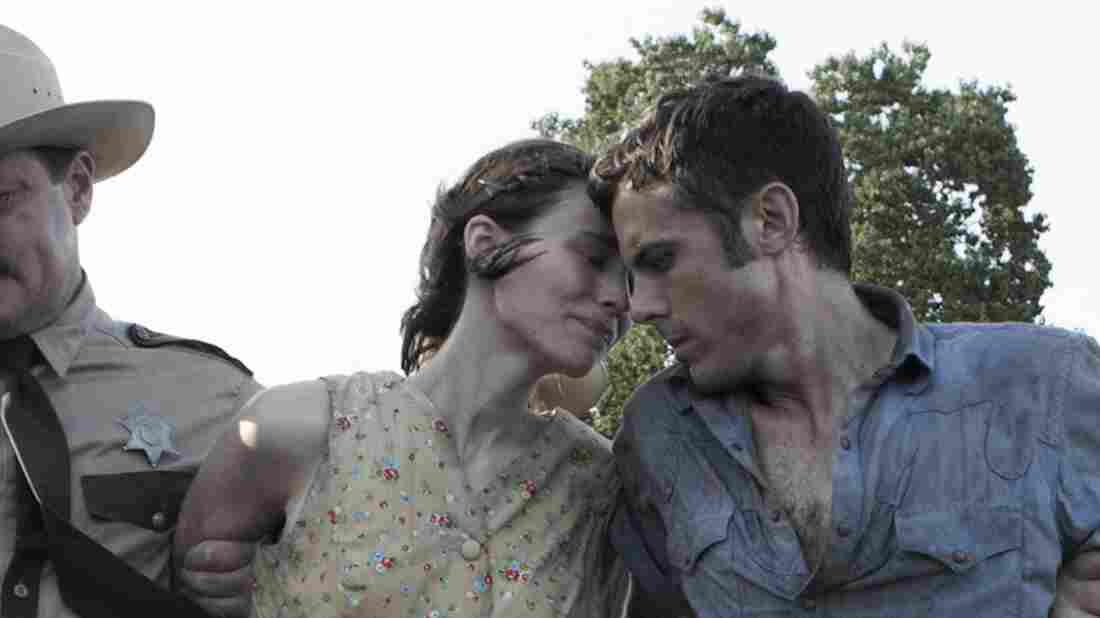 David Lowery's Ain't Them Bodies Saints begins with what might have been its end.

Ruth (Rooney Mara) and Bob (Casey Affleck) sit in their ramshackle home after a botched robbery. The small-town Texas cops shooting at them have already hit and killed Freddy, the twosome's partner, and Ruth has downed a policeman. They're outnumbered and trapped, and Ruth suggests they run; Bob knows that's suicide.

So many final film shootouts end with body bags, but here the result is surrender: Bob takes the blame for shooting that cop, along with the accompanying 25-to-life prison sentence. Ruth, treated as a naive, unwilling accomplice, returns home and gives birth to their daughter.

And so like Badlands — whose director, Terrence Malick, is easily the largest influence on this film — and like the more recent Sun Don't Shine, which Lowery edited, Ain't Them Bodies Saints tells the story of a man, a woman and the gun that binds them. Only in this case, the gun goes off in the prologue, and we're left to see what kind of life can be had when nearly everyone lives to tell about it.

After this opening setup, Lowery's modern-day Western jumps forward a handful of years to find Bob having escaped from prison and slowly finding his way back home, where a sheriff (Ben Foster) has taken an interest in Ruth. But even as the film tells the story of a man attempting to reclaim his family and freedom, Ain't Them Bodies Saints remains haunted by a feeling that the reality it portrays has survived longer than it was destined to.

Its characters, speaking in rough and slow drawls, have a tired swagger, if that. Only Bob walks around with the old self-assurance, but he's out of touch. "Is this how fellas are wearing their hair?" he asks, looking at a poster after he's gotten out.

In many ways, Ain't Them Bodies Saints allows us to take stock of an eventful year for American indie films. Lowery has connections to the lo-fi mumblecore scene that's helped shape the indie landscape over the past decade, and which, with Sun Don't Shine and the equally striking Computer Chess, continues to push boundaries. But the director's personal work has a closer affinity to grander projects of recent memory: Shane Carruth's Upstream Color (edited, again, by Lowery) and Derek Cianfrance's The Place Beyond the Pines.

Like those two films, Ain't Them Bodies Saints has big thematic ambitions matched by a grandiloquent style — one that it shares particularly with Upstream Color, and that might be called neo-Malickian if Malick weren't still defining the tradition himself in films like To the Wonder.

Such an of-a-piece series of visual monuments in one year means that Ain't Them Bodies Saints has a pretty strong chance of striking some viewers as cliched or affected. Its golden-hour cinematography and persistent awe-and-wonder score sit precariously between stirring and obtrusive, inspiring and derivative.

Still, if the film can feel at times like one long montage, its style allows for a certain amount of narrative freedom. Lowery lets the consistent mood set by that surging score serve as an anchor, and then, in cutaway shots and ruminative interludes, slips us away from the propulsive drama of the plot to let the pathos sink in — to let us feel the bitter stagnancy of a place that seems to have no future, only a past that never quite came to a close.

This sad truth hits particularly hard because, at the film's start, the future is all that seems to matter to Ruth and Bob. "I don't wanna go to jail. ... And that shack ain't a home. ... And I think I'm gonna have a baby," Ruth says in the movie's first scene.

Freedom, stability and family: These are the imperatives that Ruth lays out, and Bob is more than ready to comply. Later, he'll detail a dream future for Ruth, one featuring their own big house on their own plot of land.

But we all know not to expect to get everything we want; most of us also realize that people often don't get what they need, either. And Lowery's skepticism about Bob's confident vision pushes beyond even that sobering awareness: He pictures what happens after bleaker realities set in, or more accurately, what sometimes can't happen. In Ain't Them Bodies Saints, there are no second chances, just slow marches to inevitable conclusions. (Recommended)