Accessibility links
Riding Choppers And Harleys To Protect Kids In Need Bikers may have a tough image, but Happy Dodson, Taz Roman and other members of Bikers Against Child Abuse have a soft spot for kids. The international nonprofit accepts referrals from parents, police and social workers, and if those kids ever feel unsafe, BACA members will come roaring to their aid. 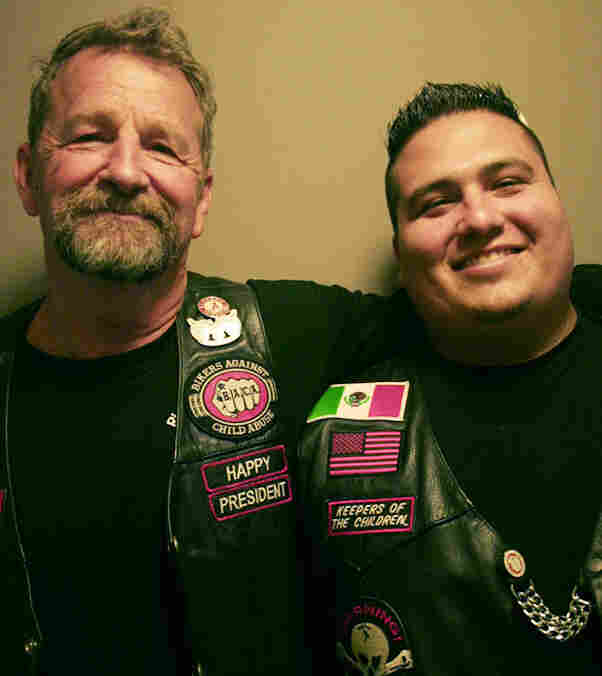 Happy Dodson (left) and Taz Roman are president and treasurer, respectively, of the Connecticut chapter of Bikers Against Child Abuse. StoryCorps hide caption 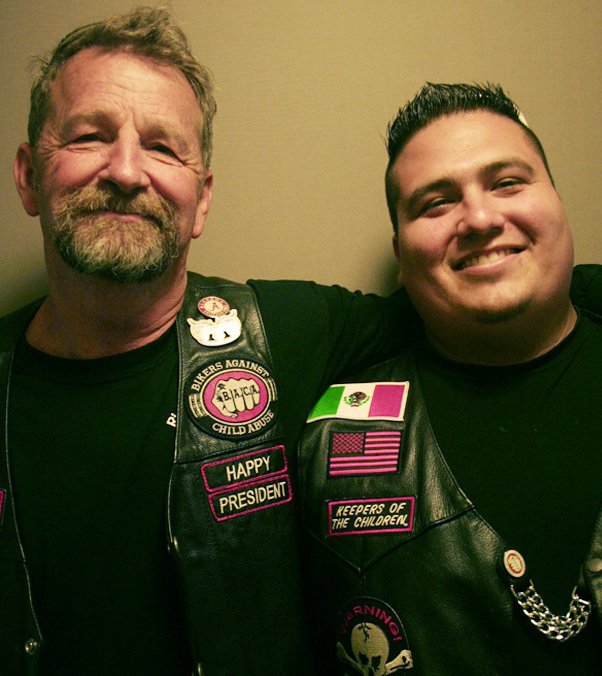 Happy Dodson (left) and Taz Roman are president and treasurer, respectively, of the Connecticut chapter of Bikers Against Child Abuse.

Happy Dodson and Taz Roman are bikers. Not cyclists, but the leather jacket and chained wallet kind of bikers. They're also members of a group called Bikers Against Child Abuse.

The nonprofit, with chapters across the U.S. and in some parts of Europe, accepts referrals from parents, guardians, police, social workers and other agencies. Whenever those kids don't feel safe, they can call Happy, Taz and their other biker friends, who come straight to the child's house.

"You got 15, 20 bikes rolling down the street, and everybody's in leather," Happy tells Taz on a visit to StoryCorps in Norwich, Conn. "You know, everybody works, and everybody's got everything else going on, but we drop all that stuff for that kid."

The group's sometimes fierce look can help bolster the kids, explains Taz, 29. "You know, kids understand that we're scarier than the person that's abusing them."

"Then they realize that, 'Hey, there are adults that we can trust and will take care of us,' " Happy says. "There's just no way to describe the feeling. And normally I'm not a soft person!"

"We have a kid right now, and she goes up to any biker," says Taz.

"She'll let you know real quick she's in our family," says Happy. "I remember the first day we gave her the vest, just like we wear. She put it on, and her mom said she slept with it for three days — wouldn't take it off."

"It's nice to see her feel safe. You can see that she feels safe when she's around us," Taz says.

Any abuse must be reported to authorities before BACA can become involved. All group applicants must pass a federal fingerprint background check to join, must attend organization meetings and events during their first year and must be unanimously approved "worthy" by a board of directors. BACA policy also dictates that no member is ever allowed to be alone with a child.

Taz, treasurer of the Connecticut chapter, has a very personal reason for getting involved with BACA. "My stepdad, you know, he'd come home drunk and start whaling on me every single night. I used to think it was my fault, and it was hard growing up like that," he tells Happy.

"I think as a kid, you always feel like you're alone," he continues. "You're going to bed with this burden every single night, and you wake up knowing exactly what's going to happen the next day. You're so scared that you don't know how to go about talking to somebody about it.

"So, if I can help kids overcome their fear of their abuser then maybe that'll help me deal with and cope with the history that I came from," Taz says.

"I wish it was something we didn't have to do," says Happy.

"I feel exactly the same way. At the end of the day, you want these kids to have a better future than you could have possibly had," Taz says. "When I put my kid to bed, that's what I think about. You don't just want it for your kid, you want it for everybody's kid. And I think that's what helps me sleep better at night."