Accessibility links
N. America's Oldest Known Petroglyphs Discovered In Nevada The carvings etched into limestone boulders near Pyramid Lake in western Nevada show that the early North Americans were surprisingly creative artists. The carvings, which are at least 10,000 years old, are abstract, geometric designs including shapes that look like diamonds and trees. 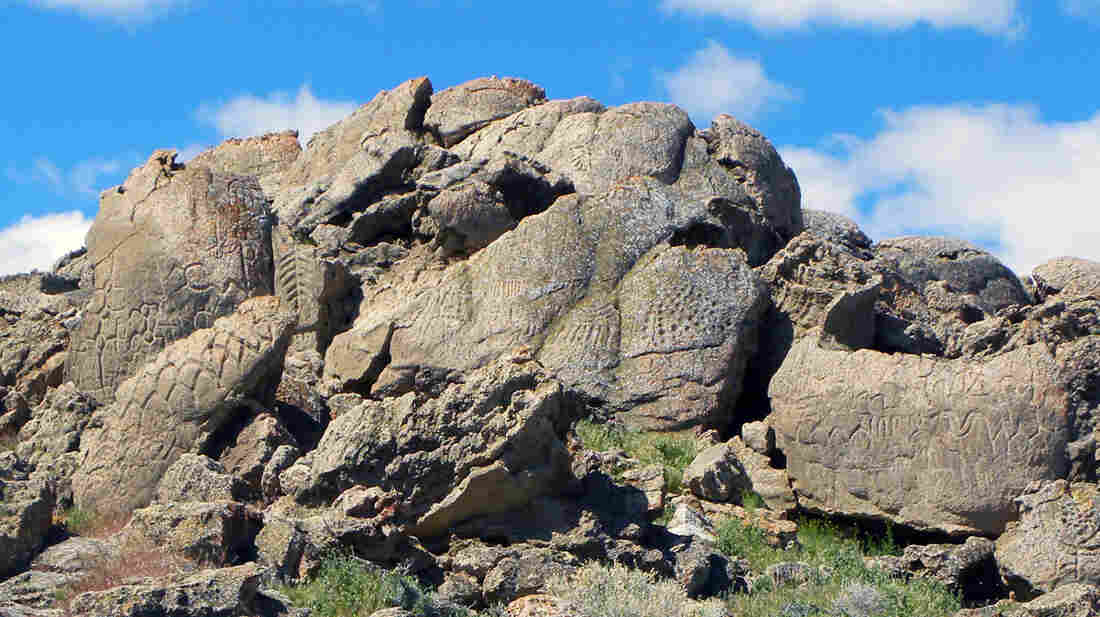 Ancient North Americans gouged elaborate rock art into a heap of big boulders northeast of Reno, Nev., more than 10,000 years ago and perhaps 15,000 years ago. That makes the carvings the oldest known petroglyphs on the continent, according to a paper published in the Journal of Archaeological Science.

Experts have known about these petroglyphs and believed they were old, but nobody knew just how old until paleoclimatologist Larry Benson used his expertise in the history of the climate of the West to date them.

"I think it's really amazing that people that far back were creating such wonderful things," Benson says.

The discovery is significant because the first people who lived on this continent are largely a mystery. They arrived more than 14,000 years ago, but archaeologists have found little to tell us about their culture — hardly any weavings, pottery or other handiwork.

"To get something this complex this early is very, very rare," says Dennis Jenkins, an archaeologist at the University of Oregon's Museum of Natural and Cultural History.

The new discovery shows that some of the earliest North Americans were surprisingly creative artists.

Benson has been interested in Native American artifacts since he was a boy hunting for arrowheads in farmers' fields in Missouri. So he was thrilled when he got a chance to check out some rock art on the Pyramid Lake Indian Reservation about 10 years ago.

He recalls being entranced by how "incredibly beautiful" these petroglyphs are. 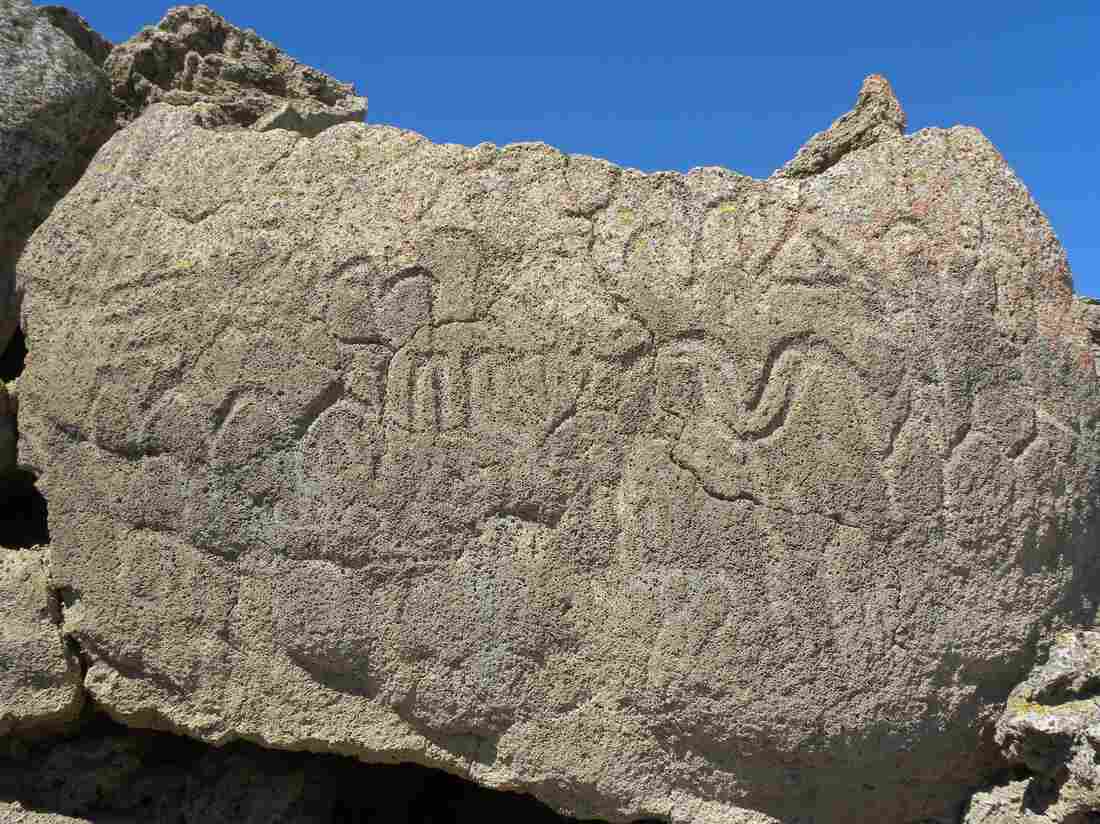 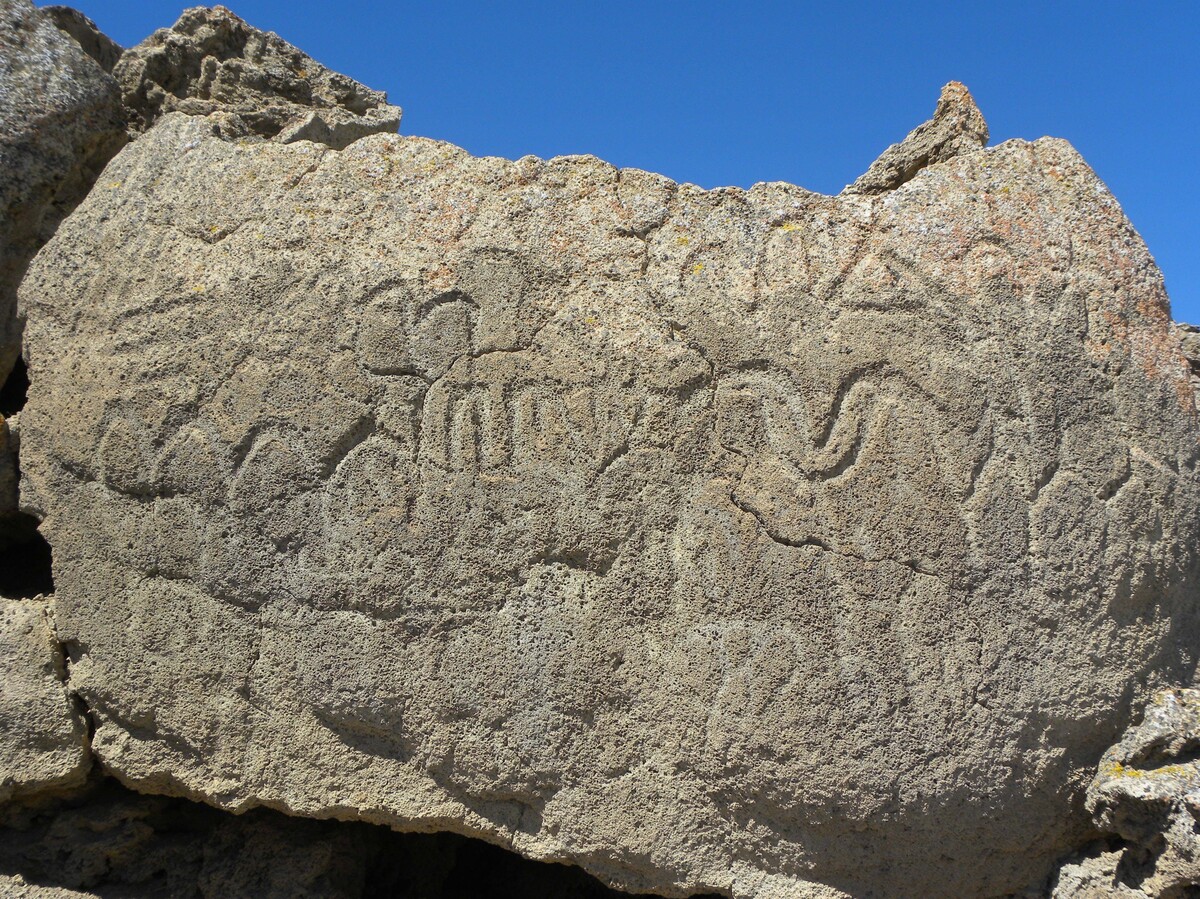 He saw a heap of big boulders. Nearly every surface covered with geometric patterns. Things like concentric circles, groups of diamond shapes and etchings that resemble trees. The collection of petroglyphs is larger than most others in the Southwest, and is carved deeper into the rock.

"They're almost unique in the sense that the grooves have been carved down almost an inch deep in some cases," says Benson, an emeritus scientist with the U.S. Geological Survey who does research for the University of Colorado and its Museum of Natural History.

Just by looking at the designs, Benson thought he might know how old they were. He noticed that the symbols are much whiter than the gray rock they're carved into.

He knew from his climate research that the dry area where the petroglyphs are located was once a lake, and that the white coating was probably left from the last time the rocks were submerged in water, which suggested that the petroglyphs may be older than 11,000 years

"And I did know, at least from my limited knowledge, that these were probably older than the oldest dated petroglyphs in North America," he recalls.

But to prove it, he needed permission from the Pyramid Lake Paiute Tribe to sample the coatings on the rocks.

It took years to get that permission, and although he did sample the rocks near the petroglyphs, he has yet to sample any of the ancient rock art.

Once he dated the different coatings on the rock — the coating that the ancient people gouged into and the one that covers their artwork — he confirmed that the artwork was at least 10,000 years old and maybe 14,800 years old. The early North Americans would have created these designs during a dry period between two very wet times. Sediment cores from the lake bottom also helped him with the dating. (Along the way, he learned that the most recent wet period lasted until 10,300 years ago, and not 11,000 as experts had previously believed.)

Jenkins, the University of Oregon archaeologist, had previously discovered the oldest human remains in North America in what's known as Paisley Caves in Central Oregon. There, he found little that could be considered art in his findings from their settlement 14,000 years ago.

And Jenkins says that Benson's findings open the door for scientists to learn more about the people who lived on this continent long ago. Many other lakes in the West's Great Basin rose and fell thousands of years ago when the climate was making dramatic shifts.

He hopes that Benson's techniques for using coatings left on rocks to date petroglyphs will be replicated elsewhere to learn how long ago ancient artists were doing their work.