Accessibility links
To Care For U.S. Kids, Filipinas Leave Their Own Behind Tens of thousands of Filipinas work as nannies in U.S. households. Many leave their own children in the care of relatives back home, a wrenching but often unavoidable decision in the impoverished Southeast Asian nation. 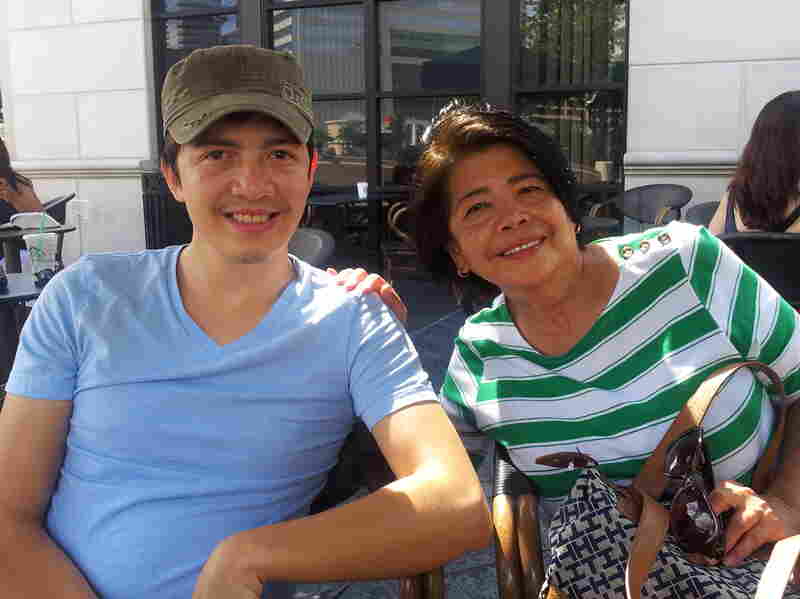 Lita and her son, Myke, now live in Houston together. She still works as a nanny and Myke is an interior designer. Lita's two daughters have also immigrated to the United States. Ashley Westerman/For NPR hide caption 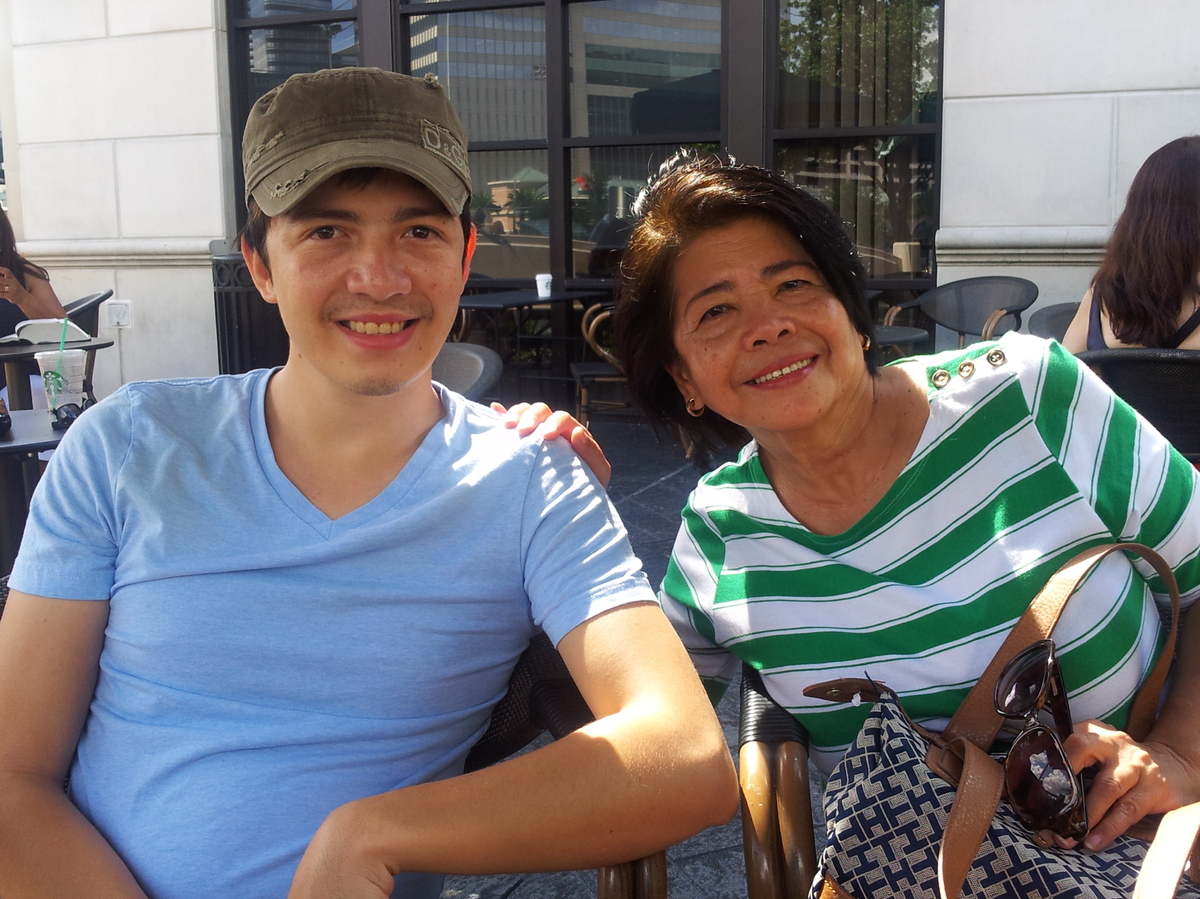 Lita and her son, Myke, now live in Houston together. She still works as a nanny and Myke is an interior designer. Lita's two daughters have also immigrated to the United States.

Few American mothers could fathom a situation that would force them to leave their country in order to put food in their children's bellies, clothes on their backs and send them to school. This is the reality for many Filipina women, who cross oceans in search of jobs that pay enough to provide for their families back home.

The Philippines is known worldwide for sending its citizens overseas to work, and a recent study has shown the country consistently deploys more women than men. In the United States, Filipinas are often nurses and caretakers; many work as nannies

Although the total number of Filipinas working as nannies is unknown, advocacy groups estimate Filipinos make up 15 percent — or as many as 300,000 — of the approximately 2 million domestic workers in the United States.

One of those nannies is Lita, a petite woman of 60 with brown eyes and dark hair that's starting to turn salt-and-pepper. Lita, who asked us not to use her last name, also runs errands for her employer in an affluent part of Houston.

After mailing a package at the Fedex store, Lita points out the places she visits almost daily.

After emigrating from the Philippines in 1989, Lita was hired by her "second family," as she calls them, through an agency. Over the last 24 years, she's helped raise all three of her employer's children from birth.

She says her employers treat her well and pay her well, and they have even given her benefits like a retirement account and health insurance. Experts say benefits like these are extremely rare among immigrant nannies.

Lita knows she got the best possible deal from the painful decision to leave her family and children behind. She says she had no choice but to leave — life was already tough in the Philippines, and then her parents got sick.

"And none of my family, we cannot afford their medical bills towards it," she says. "I was OK in the Philippines, but then I said, 'I think I need to work here to make more money. To support our family and, of course, I have little children.'"

At the time, her three children were between the ages of three months and 5 years. Lita says leaving them was hard, and in the beginning she cried a lot, especially if anyone talked about kids. But she knew it was the right decision.

"We are very poor," she says. "So, I mean, thinking about providing for my family, it just comes naturally."

Seeing Her Children Once A Year

Still, Lita's migration experience is a dream come true for women who are forced to leave the Philippines in search of work. Despite a growing economy, the Southeast Asian nation still struggles to create jobs with decent wages. So droves of Filipinos are heading overseas to work — an average 1.2 million a year, according to the Philippine Overseas Employment Administration.

Lita was able to see her children at least once a year — either she would return to the Philippines or they would visit her in the United States. But each time, saying goodbye was heart-wrenching.

"Especially when they were a little older. Each time I leave, I see my daughter, my eldest daughter, kind of sit in the corner and kind of have some tears in her eyes."

When they weren't able to be together, phone calls, pictures, letters and videos were her lifeline. There were also audio tapes.

"At night sometimes, when I miss them, I will play my cassette and I'll hear them kind of giggling and laughing ... and that makes it all worth it, I would say."

And the development of platforms like Facebook, Skype and Google Chat have made the world seem a little smaller.

Patricia Ballesteros, 32, had a much more difficult experience working in the United States. Ballesteros' reasons for leaving the Philippines are familiar: a sick mother, a young son and a mortgage that had to be paid.

"I didn't even [think] that I would have to leave my family, but I really had no choice, so I tried different ways on how I could leave the country," Ballesteros says. 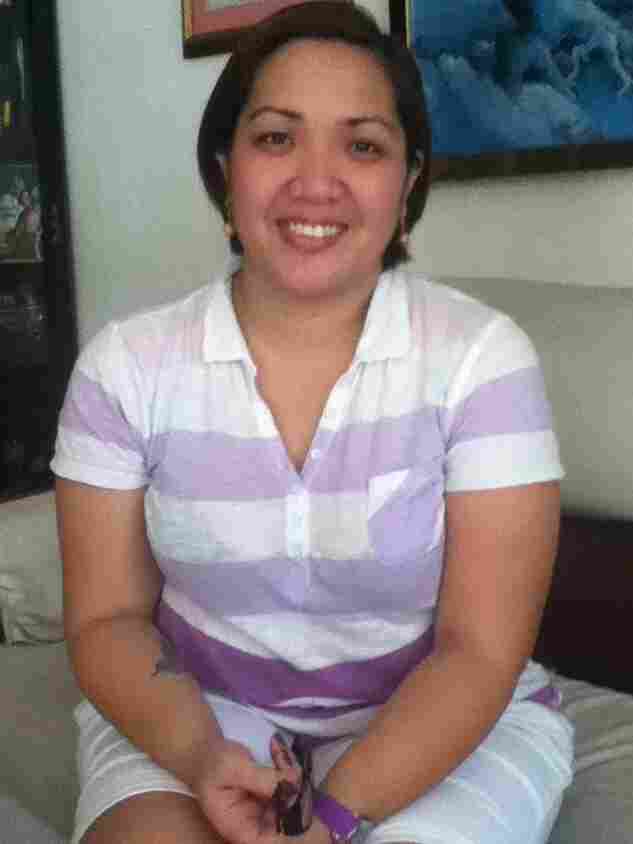 Patricia Ballesteros had to return to the Philippines after her mother passed away in March. She is still waiting to get her papers in order so she can return to the United States and continue working as a nanny in New Jersey. Ashley Westerman/for NPR hide caption 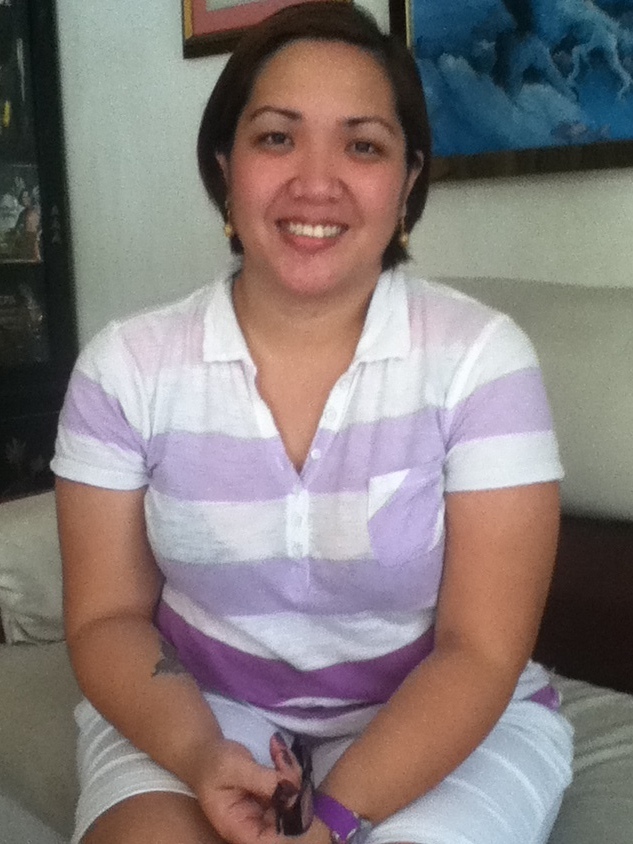 Patricia Ballesteros had to return to the Philippines after her mother passed away in March. She is still waiting to get her papers in order so she can return to the United States and continue working as a nanny in New Jersey.

In 2009, Ballesteros fell victim to a human trafficking scheme through a recruitment agency that sent her to Miami to be a housekeeper. After enduring her recruiter's abuse for two years, she and 14 others managed to escape to New Jersey, where they filed a human trafficking lawsuit against the recruiter.

The case gained publicity and the group become known as the "Florida 15."

While waiting out the litigation, Ballesteros sought work as a nanny — emotionally agonizing employment because the children she cared for were often the same age as her son.

She says it was difficult to find fair employers because she was undocumented. Ballesteros' dark eyes fill with tears as she recalls some of the people she worked for.

She eventually found a good family in Hoboken, just as the Florida 15 were awarded their T visas, which are given to victims of human trafficking. But her excitement was short-lived: Her mother passed away the following month, forcing Ballesteros to go home to the Philippines in March, where she still lives.

Even though she's not making any money, she's loving the time she has with her son, Lawrence. She hadn't seen him in four years. Ballesteros says, at first, she was afraid he would be mad at her for leaving.

'She Did The Right Thing'

Lita, the nanny in Houston, also asked her relatives to remind her children why she left. 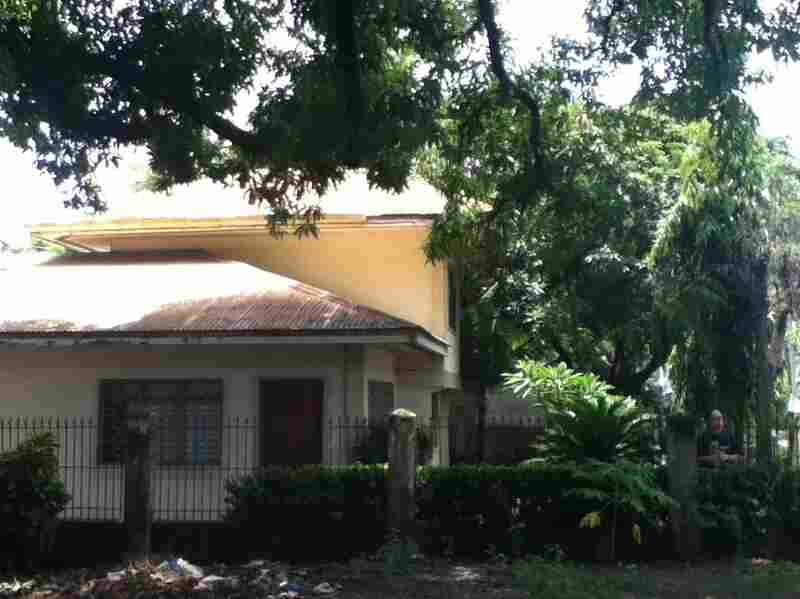 Lita's ancestral home, in a rural province about four hours north of Manila, has been refurbished over the years with money Lita has sent back from the United States. Ashley Westerman/For NPR hide caption 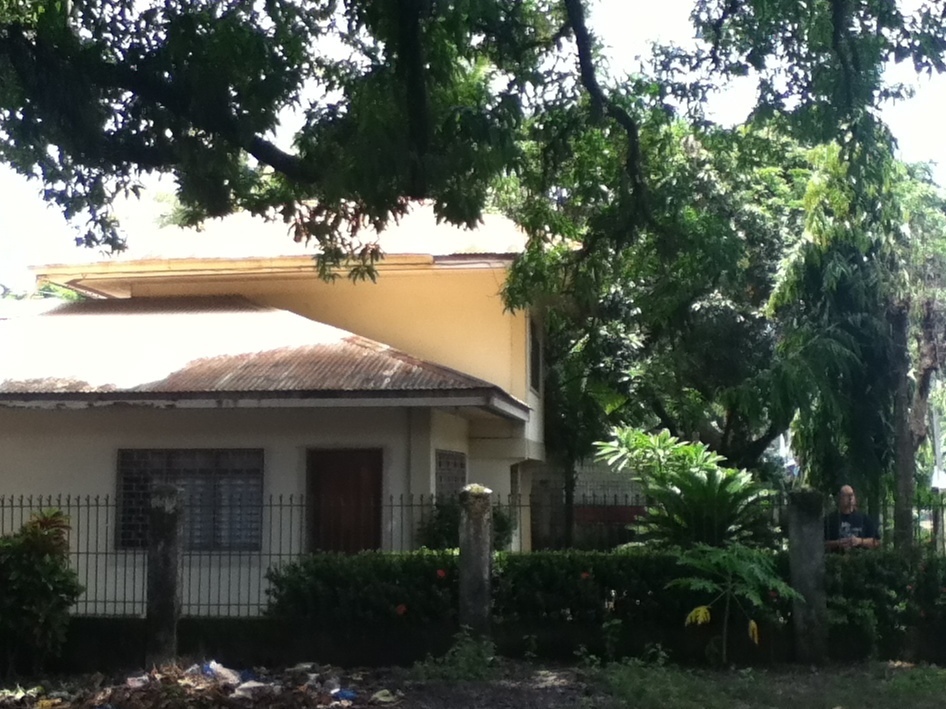 Lita's ancestral home, in a rural province about four hours north of Manila, has been refurbished over the years with money Lita has sent back from the United States.

Lita's children grew up in the small family compound in the rural Philippine town of Jaen. The white, two-story ancestral home has been refurbished with money Lita sent back from the United States. There's also a large yard where chickens roam freely among the mango trees. Her children are grown and living in America, so only six people now live in the family compound.

Tom, Lita's older brother, who helped care for her children while she was overseas, fills with pride when he talks about his sister.

"She did the right thing because of her family," Tom says. "She did a good decision. I wouldn't change anything."

Lita's son, Myke, who now shares her apartment in Houston, says growing up without his mother was difficult, but with his family's support, he and his siblings were able to make the best of it.

"It sounds hard on paper," he says, "but it's easy if you have a support structure — maybe grandparents or aunts — who is there to pretty much raise your kids like their own children."

As for her employer's children, in a few years the youngest will have left home, and Lita says she's thinking about retiring back in the Philippines.

Many Filipinos return home for retirement, but because the country still doesn't create enough good jobs, a lot of retirees end up caring for small children — their grandchildren or grand nieces and nephews — as the next generation of mothers is forced to repeat the cycle and go abroad to work.

This story was funded by a reporting fellowship from the International Center for Journalists in Washington, D.C.