Accessibility links
Debbie Macomber, 'Reigning Queen' Of Women's Fiction Holds Court At Fan Retreat Debbie Macomber's books don't get a lot of critical attention, but they've sold in the hundreds of millions. Her fans feel like they know and love the woman behind the words, so her publisher threw a party for them. 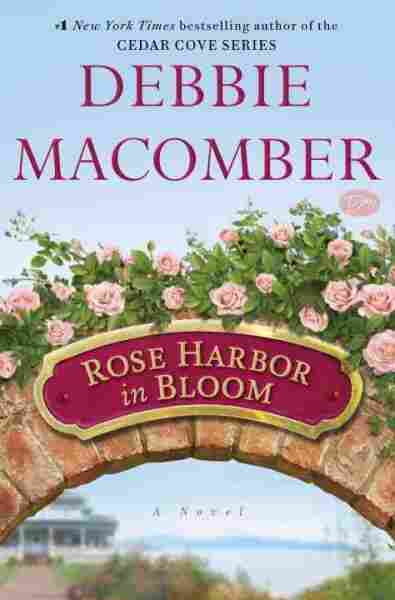 Go to your nearest paperback rack, and odds are, you'll see two or three, or four, or — well, a lot of books by Debbie Macomber, an author The Sacramento Bee has dubbed "the reigning queen of women's fiction."

Macomber has 170 million books in print; the newest, Rose Harbor in Bloom, has just been released. Her publisher, Random House, celebrated Macomber's selling power earlier this month with a fan retreat at the Gaylord Opryland resort in Nashville, where 400 women gathered for a weekend of tea, knitting and literary friendship.

They came from all over the country: Alabama, Missouri, Ohio, as far away as Vermont, and from right in Nashville. Hundreds of them; mothers, daughters, sisters and friends. And they were ready to party.

Debbie Summers of California wore a teapot earring in one ear, and a cup on the other. Summers was there with her partners in crime, Barbara Cook, Janet Howland and Millie Thomas. All were festooned with tea-related accessories, because tea features prominently in Macomber's books. Every Monday, the friends have dinner and a movie, and swap their books around. Thomas says they love the familiar feel of the stories.

"They remind us of people we know, that could live next door," she said. "The man is always some doofus who doesn't realize he's in love until it's too late." But, doofishness aside, there's always a happy ending.

There was a sock hop, featuring — what else? — an Elvis impersonator who sang to Macomber on the dance floor. And there were a lot of costumed bobby soxers out there with him. But when I ran into Thomas in the ladies' room, she showed off her original poodle skirt — the same one she'd worn as a girl.

Out in the hallway, Jeannie Simerly was knitting with her friends, who'd all driven in from the other side of the state. This was her first big outing in a while. "The past three years, I've been really sick. And I always can reach for a Debbie Macomber book, and it kind of makes you forget your illness."

"She writes about things that we're interested in," said Simerly's friend Rosemarie Shields. "Family and food, and knitting, and it's all here this weekend." 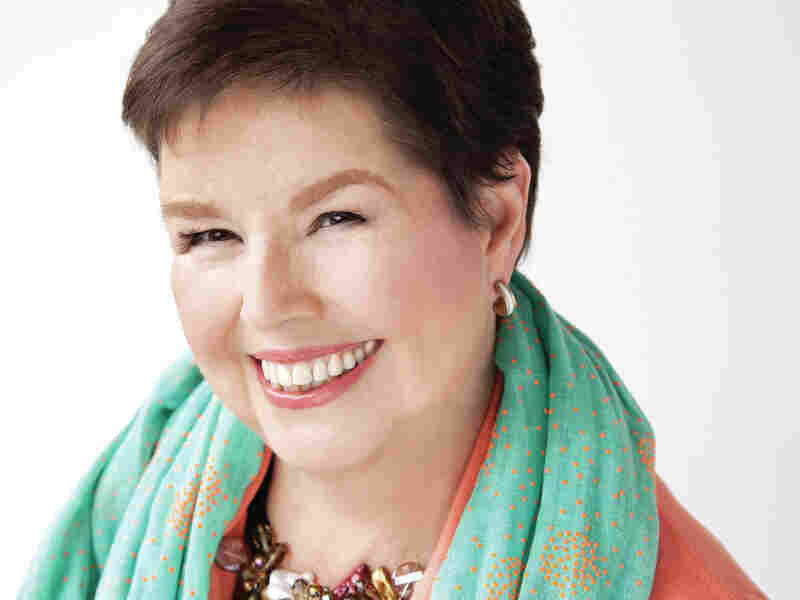 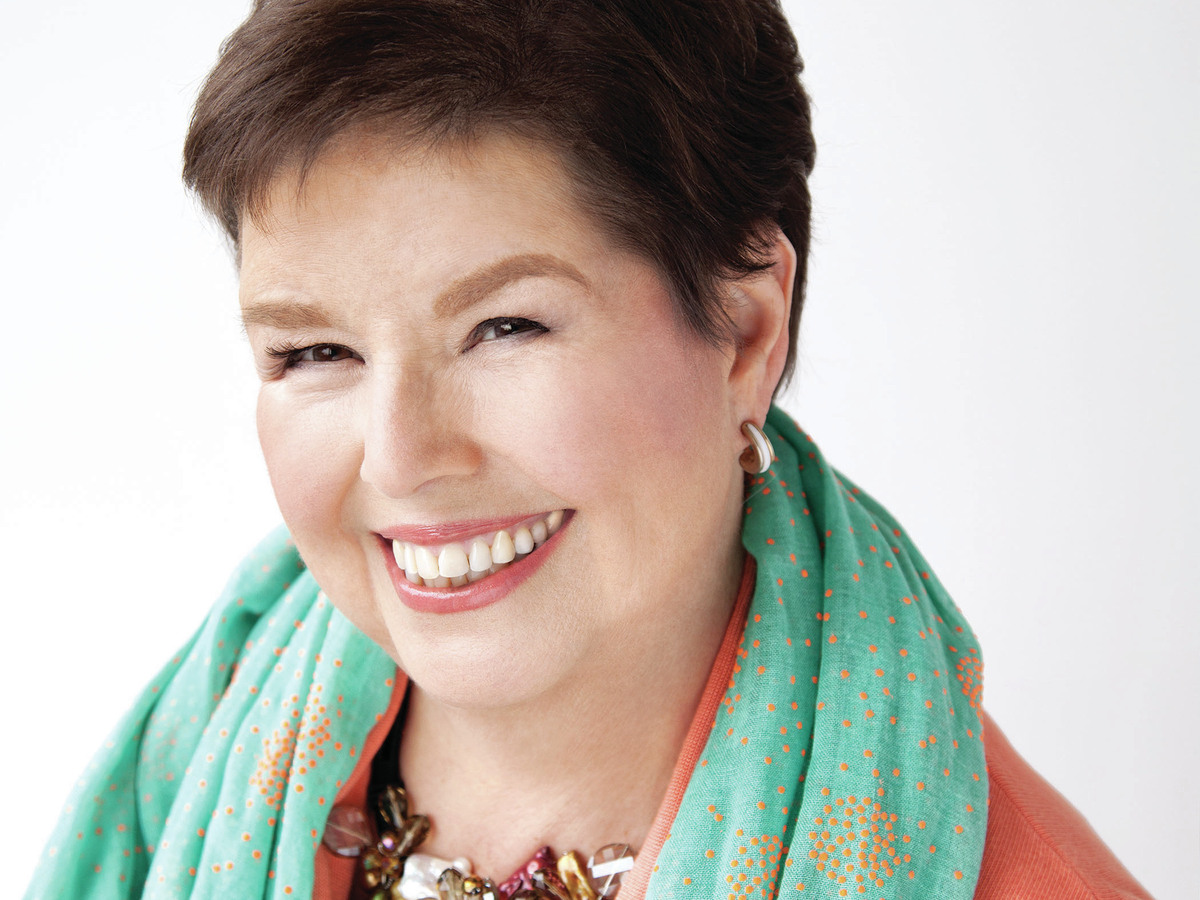 Both women say they feel a personal connection to Macomber. In fact, everyone here this weekend seemed to feel that way. They all refer to Macomber by her first name; They know her husband Wayne and her underwear-stealing dog Bogie, and her children and grandchildren.

Macomber loves them right back, signing books, comparing recipes and posing cheerfully for endless pictures. Almost everyone I met this weekend said I'd just missed Debbie — she'd been by a few minutes ago, and stopped to chat.

"I think that's exactly what an artist does: They want you to feel that connection," Macomber said when I finally found her. She said she wants to be a blessing to her readers, "to help someone who's having a hard time going through cancer to be able to escape in a good story, and forget their problems."

Though my tastes run more towards bodice-rippers, I got ready for the retreat by reading several of Macomber's books, and that's exactly what I found: gentle, friendly, comforting reads that function almost like self-help manuals in fictional form — no matter your troubles, you can forget them and follow along with Macomber's characters as they battle their demons on the road to love and fulfillment. For some readers, the books really do affect their lives. 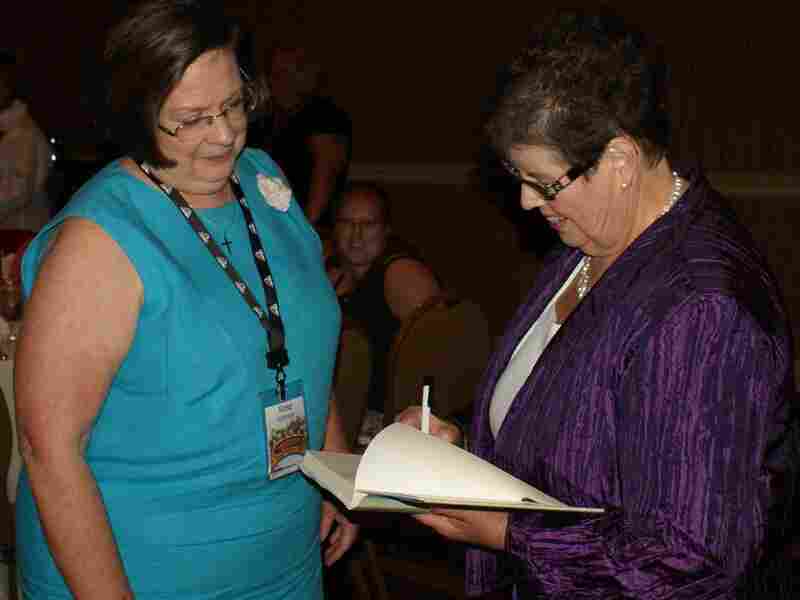 Macomber's readers feel like they have a personal relationship with the author, who happily poses for photos and signs books for endless lines of fans. Diane C. Buckridge hide caption 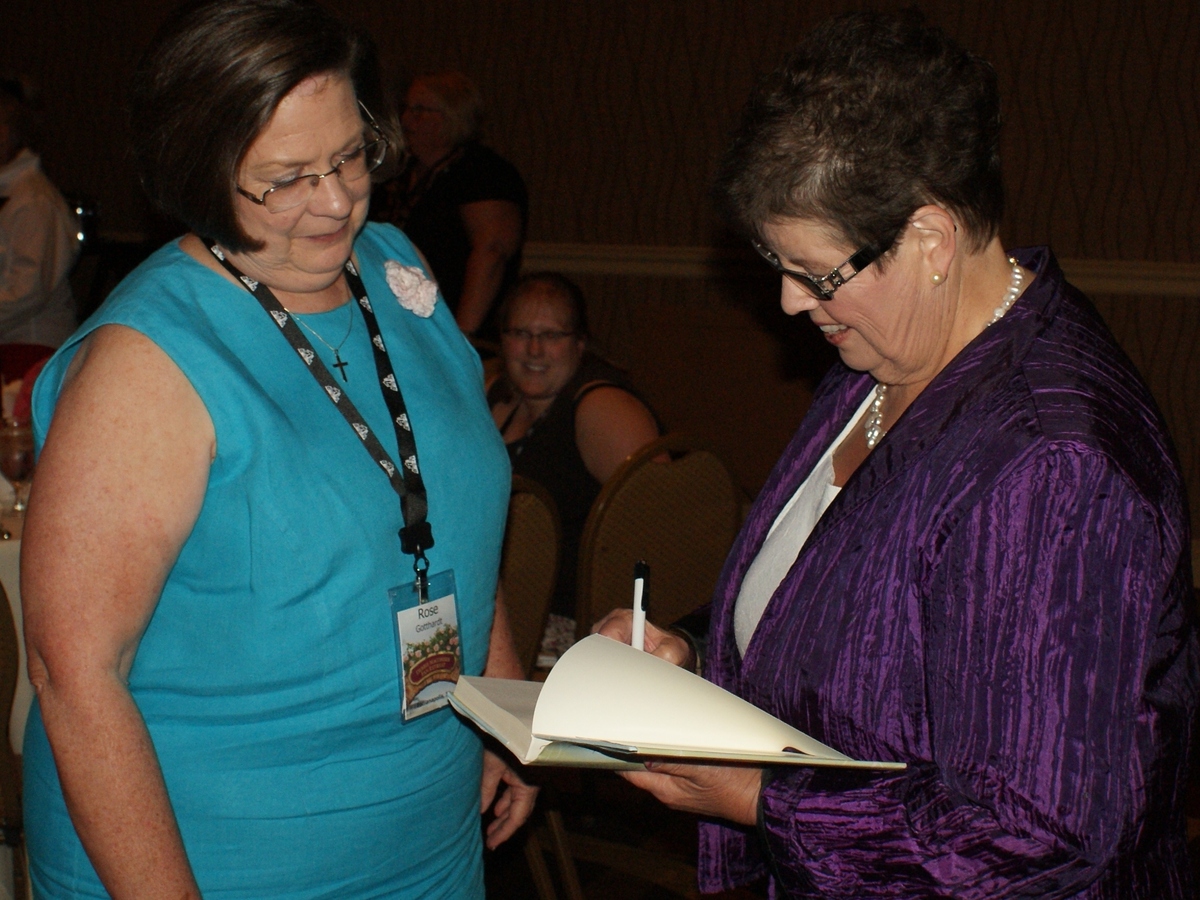 Macomber's readers feel like they have a personal relationship with the author, who happily poses for photos and signs books for endless lines of fans.

Marcia Banas — "like marshmallow bananas," she said — was inspired by Macomber's books to reconnect with an uncle who'd been diagnosed with cancer.

"I have lots of good memories of him," she said, "and I called him and told him I loved him, and how much I remembered that, and how much I appreciated it, and he thanked me; he did not know that."

Though Macomber sells millions, it's mostly through word of mouth. You won't find her in The New York Review of Books. Instead, women like Banas devour the books and then share them with friends and family — which is why Macomber's publisher thought a weekend-long party might be a good way to attract some mainstream media attention.

"For certain authors who have large fanbases and write certain kinds of books, maybe books that tend to be more commercial, the review coverage — or some of the space in traditional media — isn't always there," says Random House Publicity Director Theresa Zoro. "So we've created these opportunities."

This weekend's Debbie Macomber retreat is the first of its kind, but Zoro says Random House is planning several more with other authors — and while they haven't yet decided who'll they'll feature next, fans of women's fiction in general might want to start saving up.

Read an excerpt of Rose Harbor in Bloom