Accessibility links
'Cutie And The Boxer': Two Lives Entwined At Home, In Art Zachary Heinzerling's documentary captures the curious dynamics of a complicated relationship between two artists whose lives and work are inextricably intertwined. As Karen Michel reports, Ushio and Noriko Shinohara are still figuring themselves out after 40 years and more. 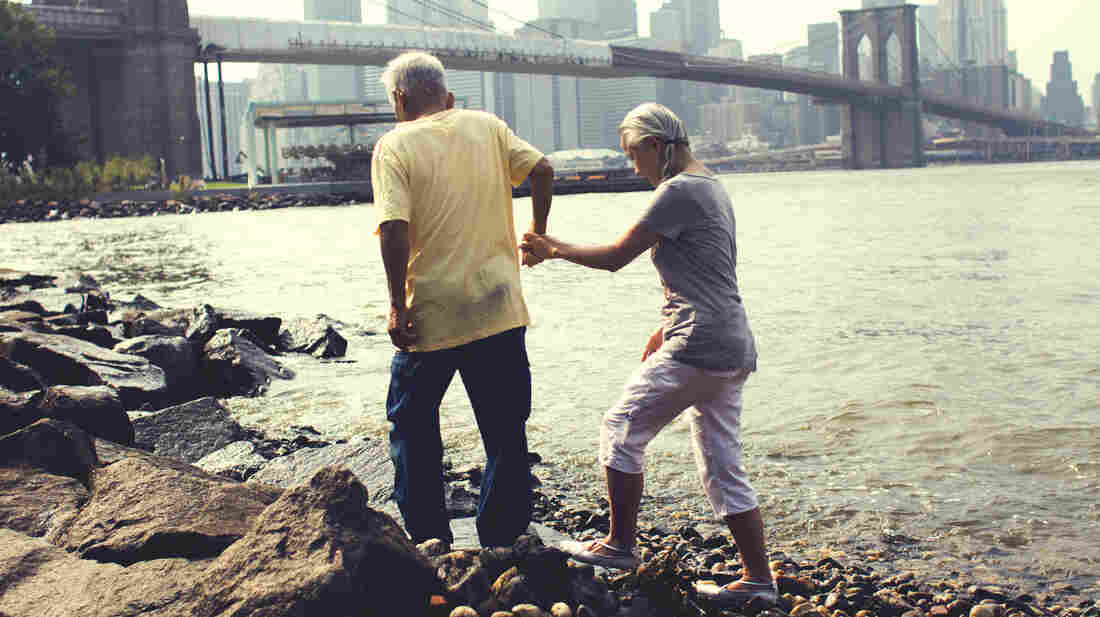 The small-scale intimacy of the documentary Cutie and the Boxer belies the outsize creativity of its Brooklyn-based subjects: the artists Ushio and Noriko Shinohara. He made his name as a bad-boy rebel beginning in the 1950s; she's only recently emerged from his professional shadow. Radius/TWC hide caption

Japanese painter and sculptor Ushio Shinohara was the bad boy of the avant-garde when he came to the U.S. more than 50 years ago. He knew Andy Warhol, hung with Red Grooms and polarized audiences with his vivid work.

And Ushio met his wife, Noriko Shinohara, not long after arriving here. She's an artist, too, but she's spent most of her career living in his shadow.

Less so recently, though. Noriko is coming into her own. And now the story of their life together is the subject of an intimate new documentary called Cutie and the Boxer.

Odd title? Not once you get to know the two artists a little. It comes from Ushio's style of painting — he punches huge canvases with boxing gloves dipped in paint — and from the pig-tailed Noriko's nickname.

"Eleven years ago I was walking on the street," she remembers. Her hair was in a braid, and a young passerby — maybe 25 years old — surprised her with a shout-out.

"He said, 'Hi, cutie!' I was, at that time, maybe 48 or 49," she says. It's not the sort of thing every mature woman might expect — or appreciate — but Noriko took it as a compliment. "So since then, I ask my family and my friends to call me Cutie."

Noriko sits in the same cluttered studio that filmmaker Zachary Heinzerling captures in his feature-length debut. He'd been working for HBO, making mostly sports documentaries, when he met the couple at an open studio. He knew pretty much right away that they'd be great documentary subjects.

"They live these authentically Japanese lives," he says, "but transplanted in Brooklyn. They live in this loft that's this sort of catacomb of history — paint everywhere, photos everywhere. And there's a sort of open-door policy there; you kind of come in, you experience them and their world, and then you leave and you're kind of back in the city."

The couple lives on two upper floors of a building in one of those Brooklyn neighborhoods most artists can no longer afford. (Often, neither can the Shinoharas.) Ushio leads the way to the rooftop.

"This is my studio," he says, indicating the open expanse. "I'm very lucky, because I'm an outside worker."

He likes working outside in part because many of his pieces are — well, they're huge. Ushio points to a motorcycle that's taller than he is, and three times as long. Its neon-green headlamp is like some cycloptic insect; its engine resembles the head of a Tyrannosaurus rex. 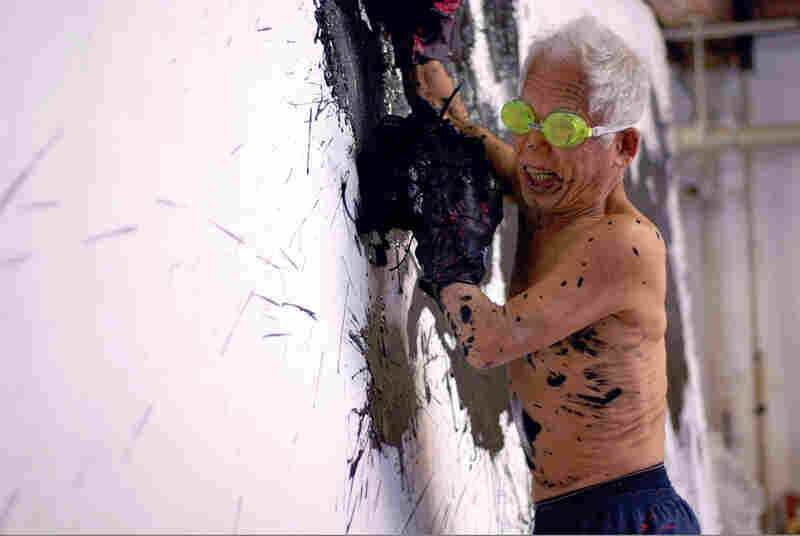 Ushio Shinohara is best known for his "boxing paintings" — performance pieces often created for an audience, in which he strikes at his canvases with gloves dipped in pigments — and for his fanciful, brightly colored sculptures of motorcycles adorned with all manner of extras. Radius/TWC hide caption 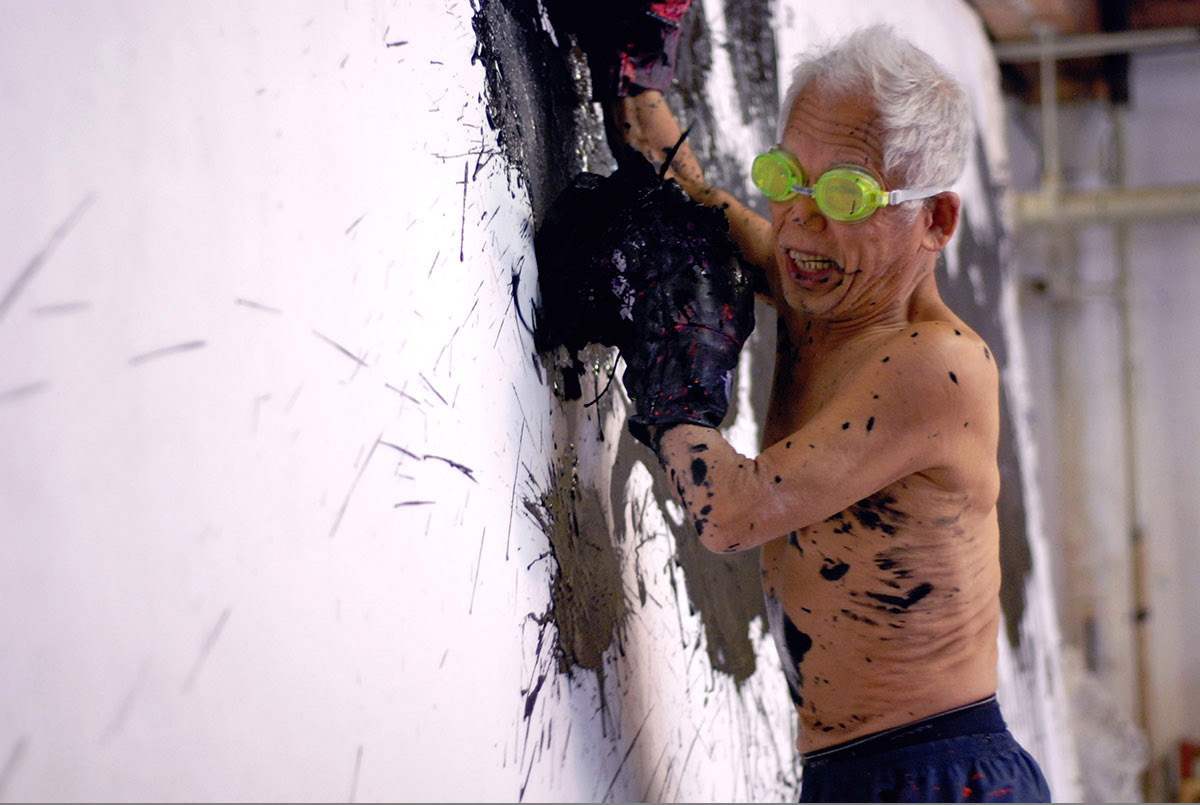 Ushio Shinohara is best known for his "boxing paintings" — performance pieces often created for an audience, in which he strikes at his canvases with gloves dipped in pigments — and for his fanciful, brightly colored sculptures of motorcycles adorned with all manner of extras.

Ushio came to New York in 1959, the beneficiary of a generous grant. And he made an impression.

"He is a genius," says curator Alexandra Munroe, leaning into the noun. She's the Guggenheim Museum's senior curator of Asian art, and she's been a fan for decades.

If he aspired to be a Pollock-style titan, Ushio Shinohara chose other American icons for his subjects — that motorcycle not least among them. Inspired by the image of Marlon Brando astride his bike, he scrounged the neighborhood for cardboard — ubiquitous on the New York City streets — and he started creating his versions, both smaller than life and, like the one on his roof, much larger.

He's never had a bike of his own, though.

"Never," he laughs, disclaiming any knowledge of how the machines work. "And my temper is an artist's temper, sometimes up, sometimes down. Very, very dangerous, on a cycle."

He exorcises that temperament in part by pounding on those canvases. The creation of his boxing paintings is a performance in itself: He wears swim goggles and boxing gloves, with paint-absorbing foam attached to them with rubber bands. Often shirtless — and still trim at age 81 — Ushio dips the boxing gloves into his paints and hammers at the canvas, working from right to left, as if he's writing kanji with his fists.

After 40 Years And More, A Relationship In Flux

The film also captures the couple's domestic life. Noriko brushes her long gray hair and plaits her two braids; they eat dinner, do their artwork.

And they bicker — over rent and bills, and the son who seems to be following his father down the path into alcoholism. (Though Ushio, the film notes, quit drinking a few years ago.) 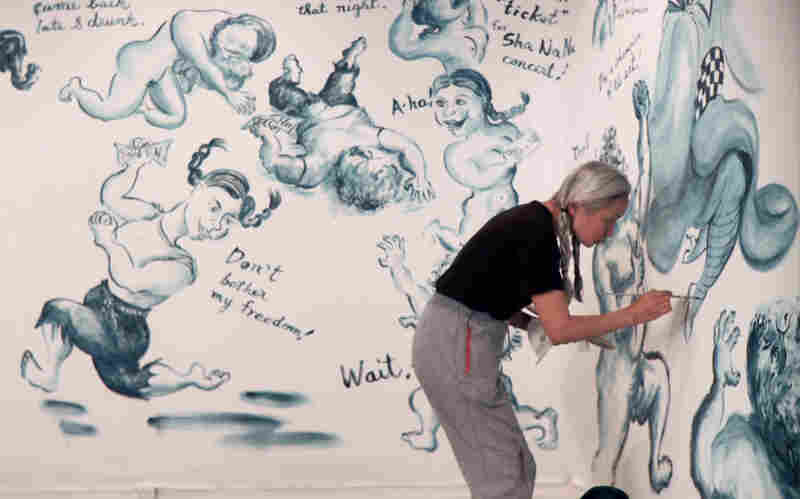 Noriko Shinohara, known to friends and audiences alike as Cutie, paints sprawling comic-style narratives on the walls of the galleries where she's invited to exhibit. They chronicle the adventures of a couple called Bullie and Cutie, who may or may not be reflections of her and her husband. Radius/TWC hide caption 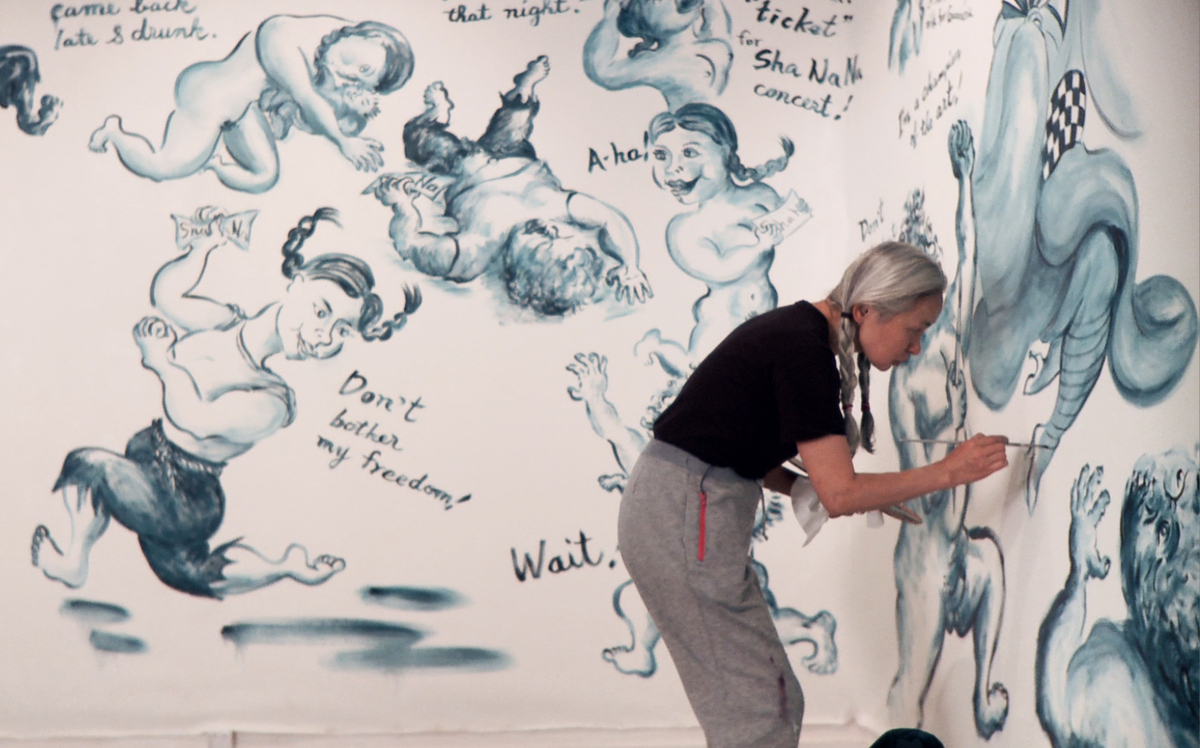 Noriko Shinohara, known to friends and audiences alike as Cutie, paints sprawling comic-style narratives on the walls of the galleries where she's invited to exhibit. They chronicle the adventures of a couple called Bullie and Cutie, who may or may not be reflections of her and her husband.

And it captures an imbalance in the dynamic of their relationship. After his initial brush with fame, Ushio's reputation rests mostly in the art world. Yet he's still the dominant personality at home.

The film shows Noriko's emergence, as an artist, from under the outsize reputation of her strong-willed husband. But it's an uphill battle. It took her three days, she confesses, to clear out a little of their living space and create room to do her own work.

Toward the end of Cutie and the Boxer, the couple opens a joint show in New York. His massive sculptures and wall-sized boxing paintings fill galleries.

Noriko, for her part, chooses to paint her work directly on the walls of the space she's given. It's narrative, much like a comic book, and it tells the stories of a couple she calls Bullie and Cutie, navigating a relationship that seems ... well, like theirs.

"People think Cutie is me," she says. "But it's not me. She's smarter than me. Because she tricks Bullie, and she wins. But in my life, I didn't win him yet."

Even after 40 years together, theirs is a relationship in flux.

"I'm a free secretary, free assistant, free chef," she tells Ushio in the film. "If you are rich, you can kick me out, right? Like that. You are poor, that's why you are with me."

"I need you," he demurs, patting her firmly on the knee.

"Because you need somebody to read the subway map," she teases him.

"Ah, Cutie loves Bullie so much," she replies. And together, they laugh.