Accessibility links
Relying On Old Artisan Ways, French Brand Makes Itself Anew Founded in the mid-19th century, luxury leather goods maker Moynat won renown for its traveling trunks for the moneyed set. But it fell on hard times and closed in the 1970s. Now, it's undergoing a rebirth, turning out limited quantities of luxurious, handmade bags that utilize centuries-old craftsmanship. 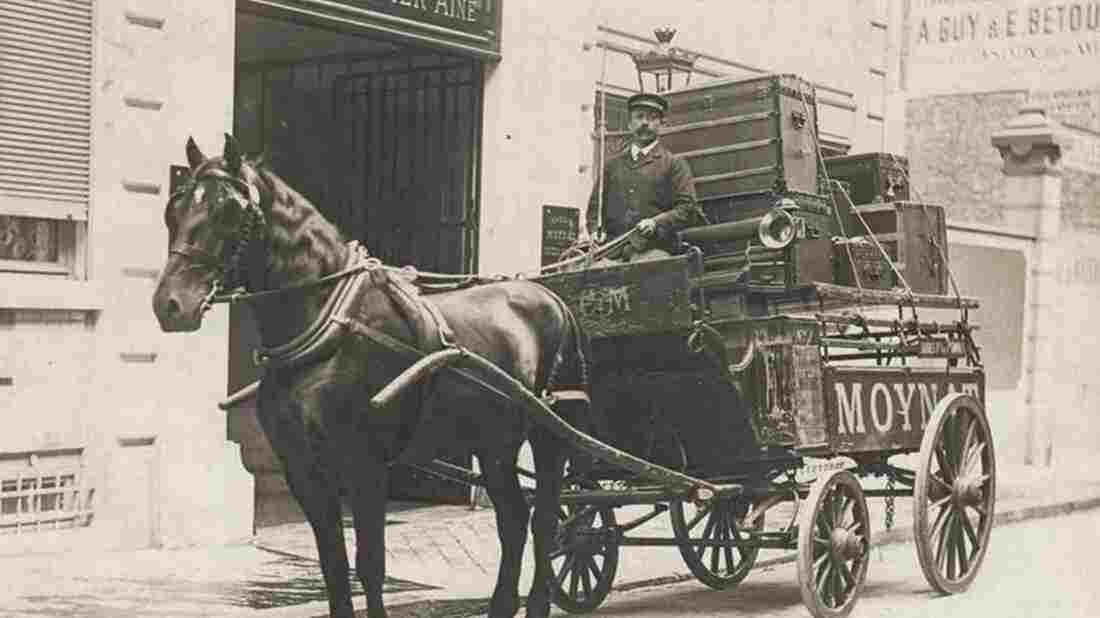 The French design house of Moynat was founded in 1849, during the great era of rail travel and the creation of the French railway network. After its heyday, the company fell on hard times and closed in the 1970s. Now, it's staging a comeback. Courtesy of Moynat hide caption 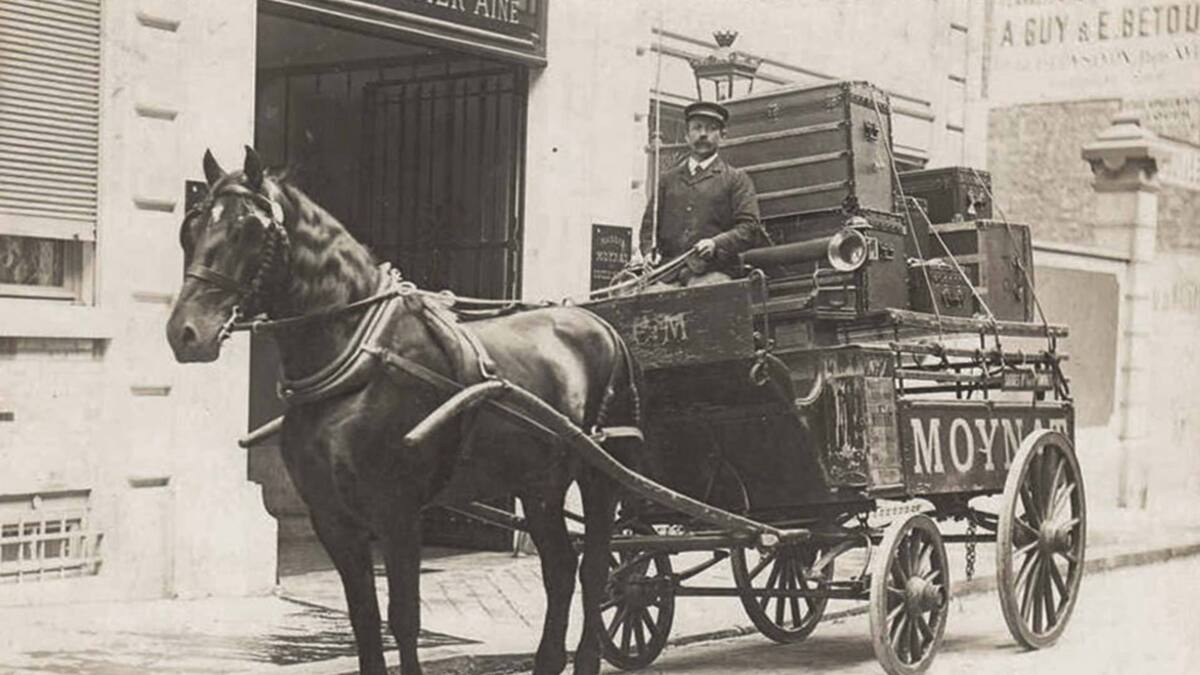 The French design house of Moynat was founded in 1849, during the great era of rail travel and the creation of the French railway network. After its heyday, the company fell on hard times and closed in the 1970s. Now, it's staging a comeback.

Founded in the mid-19th century, French luxury leather goods maker Moynat became renowned for making traveling trunks for the moneyed set. Though a pioneer in its field, it fell on hard times and closed its doors in the 1970s.

These days, the fabled company is undergoing a resurrection — turning out limited quantities of luxurious, handmade bags that rely on centuries-old craftsmanship.

On a recent day, Moynat's CEO, Guillaume Davin, leads me up the back stairs of the company's flagship boutique in Paris. 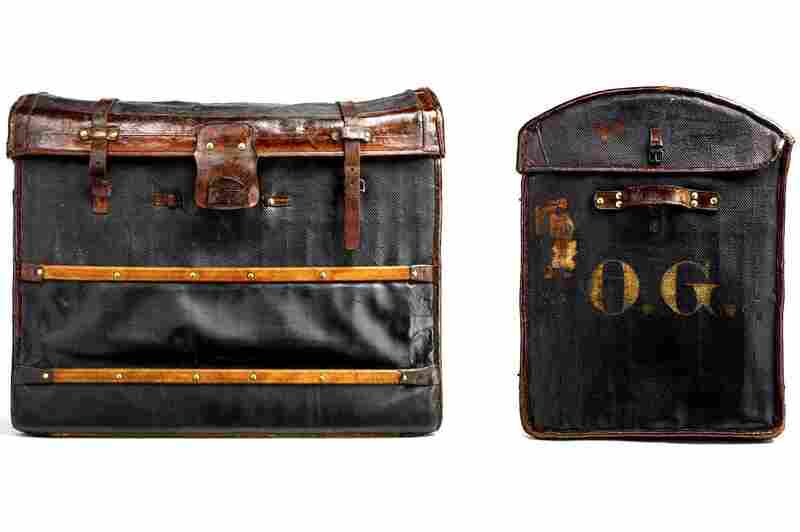 Moynat was renowned for products such as the lightweight wicker trunk named Malle Anglaise, or English trunk, which was invented in 1873. This trunk was subsequently improved and a new patent filed in 1889. Courtesy of Moynat hide caption 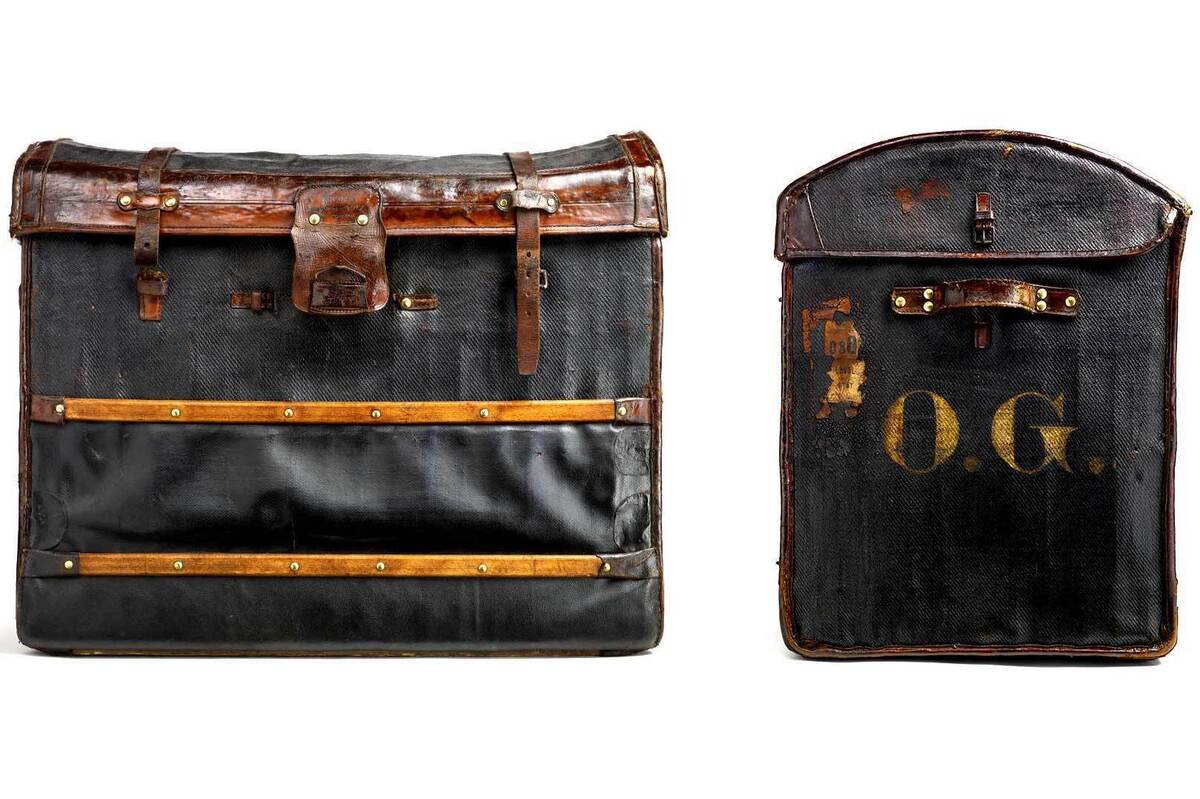 Moynat was renowned for products such as the lightweight wicker trunk named Malle Anglaise, or English trunk, which was invented in 1873. This trunk was subsequently improved and a new patent filed in 1889.

He opens a door to a room on the second floor above the shop, and my eyes fall upon dozens of beautiful, vintage trunks stacked up against the walls, covered with those romantic old travel stickers.

He points out one of the trunks; it belonged to the president of Venezuela in the 1920s.

"The last trip he took was from Le Havre to Panama," Davin says. "This was, of course, a made-to-order trunk and it was developed especially for him."

Every trunk here has a rich story. Moynat patented the first waterproof trunk in 1854, covering it with an Indonesian sap called gutta-percha.

Founded in 1849 by Pauline Moynat, the company created trunks for grand trans-Atlantic crossings. But it hits its stride when the automobile came into fashion, crafting individual pieces to fit car interiors — like hugging a wheel well.

The trunks fit the exact width and shape of the first automobiles, Davin says. Other distinguishing details included being lacquered in the same color of the cars and concave bases.

"Moynat was founded by a woman, and she brought a bit of femininity in the world of trunks," Davin says.

The aerodynamic curves and array of colors are what set Moynat apart from its competitors 100 years ago. And they're the company's signature today, says designer Ramesh Nair, whose handbag designs mimic the trunks made for cars.

"That's what gave me the idea of doing the little bag called 'Pauline,' which is one of our favorite bags," Nair says. "It's exactly the same curve." 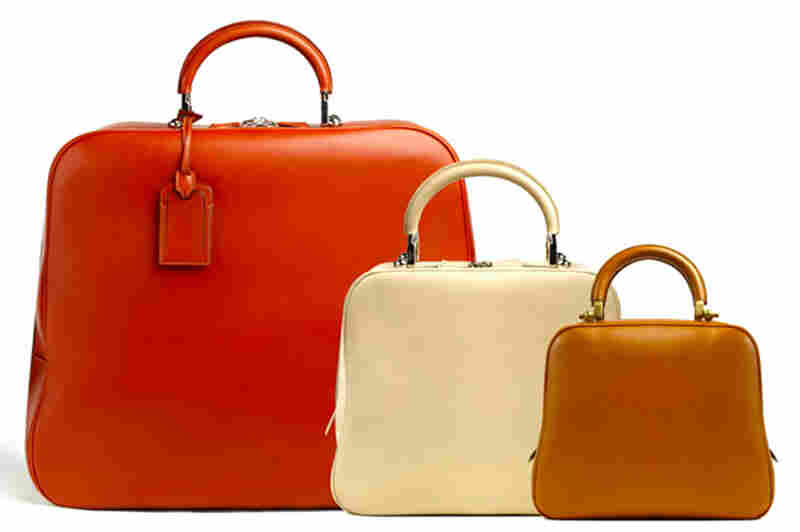 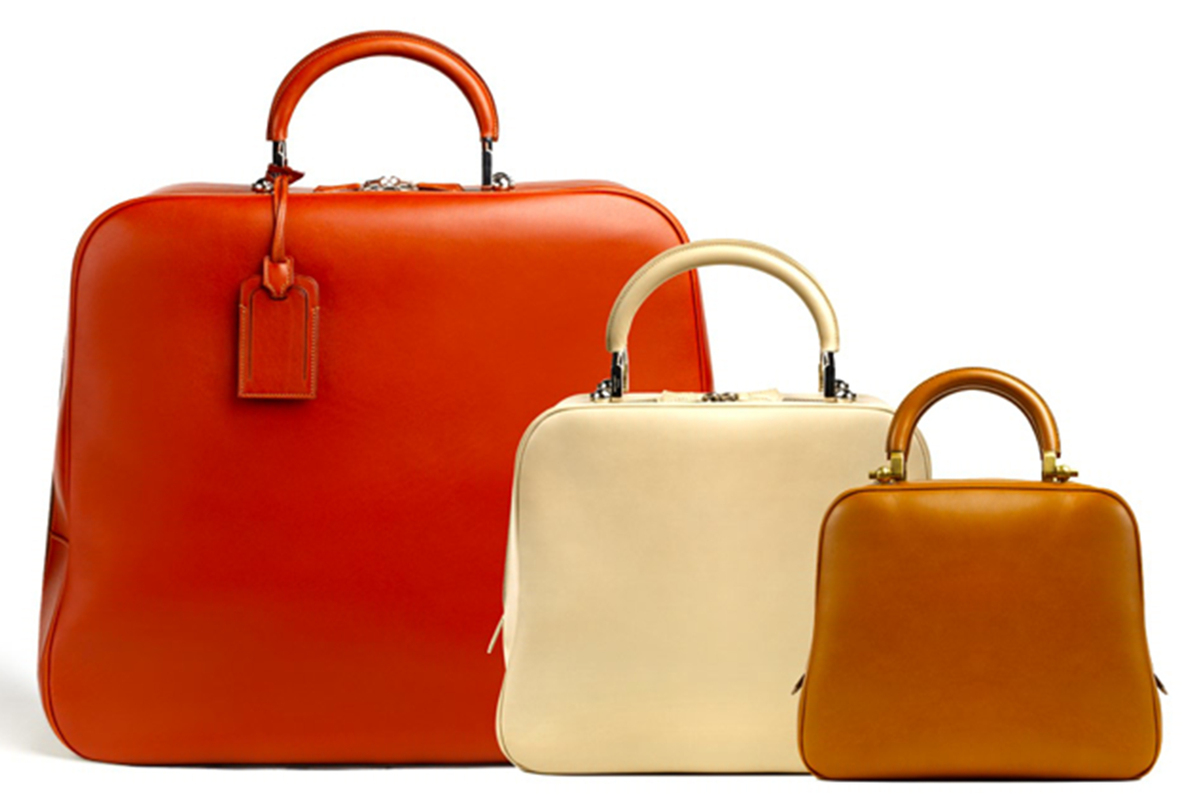 One of the very first leather goods houses of its day, Moynat was known for its traditional know-how and handcrafting skills.

But by the 1960s the trunks weren't selling so well and the name wasn't in fashion anymore, and Moynat closed shop in 1976.

Why another expensive handbag? Because Arnault considers Moynat part of French cultural heritage, so he tapped luxury veterans Davin and Nair to take the project on.

After Moynat's 35-year absence from the market, they had to put the story together again.

And, not surprisingly, antique car shows. 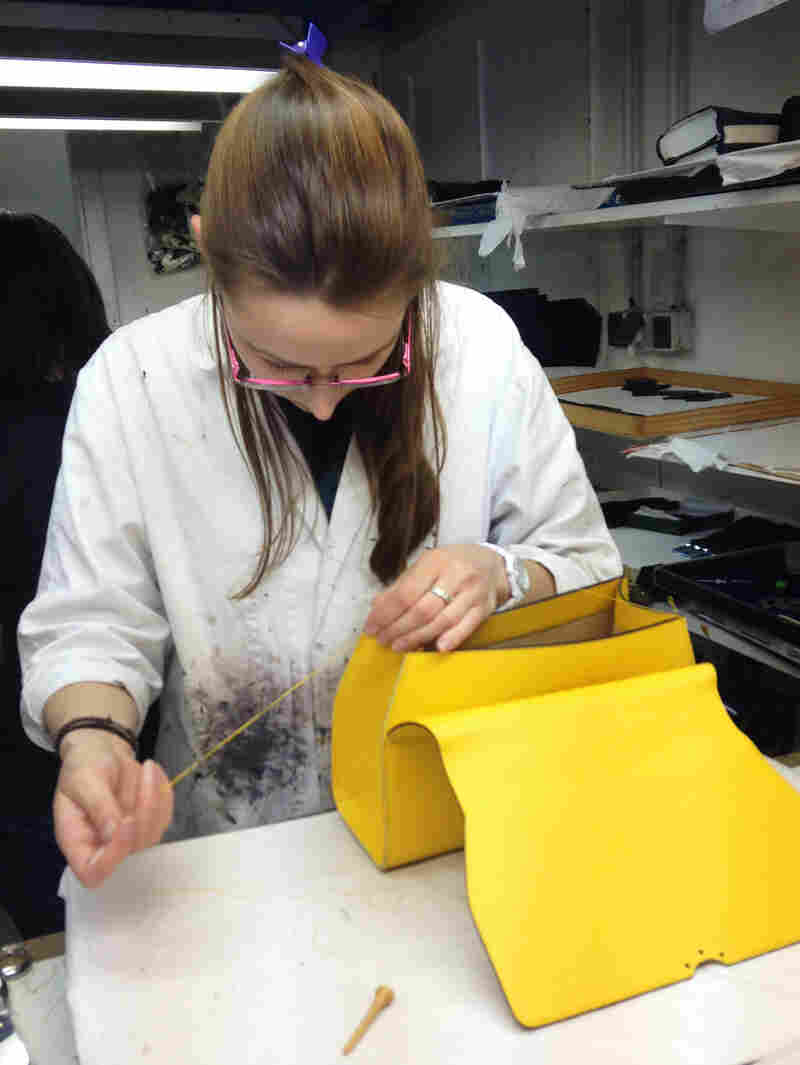 An employee sews a Moynat handbag in an atelier above the company's boutique. Eleanor Beardsley/NPR hide caption 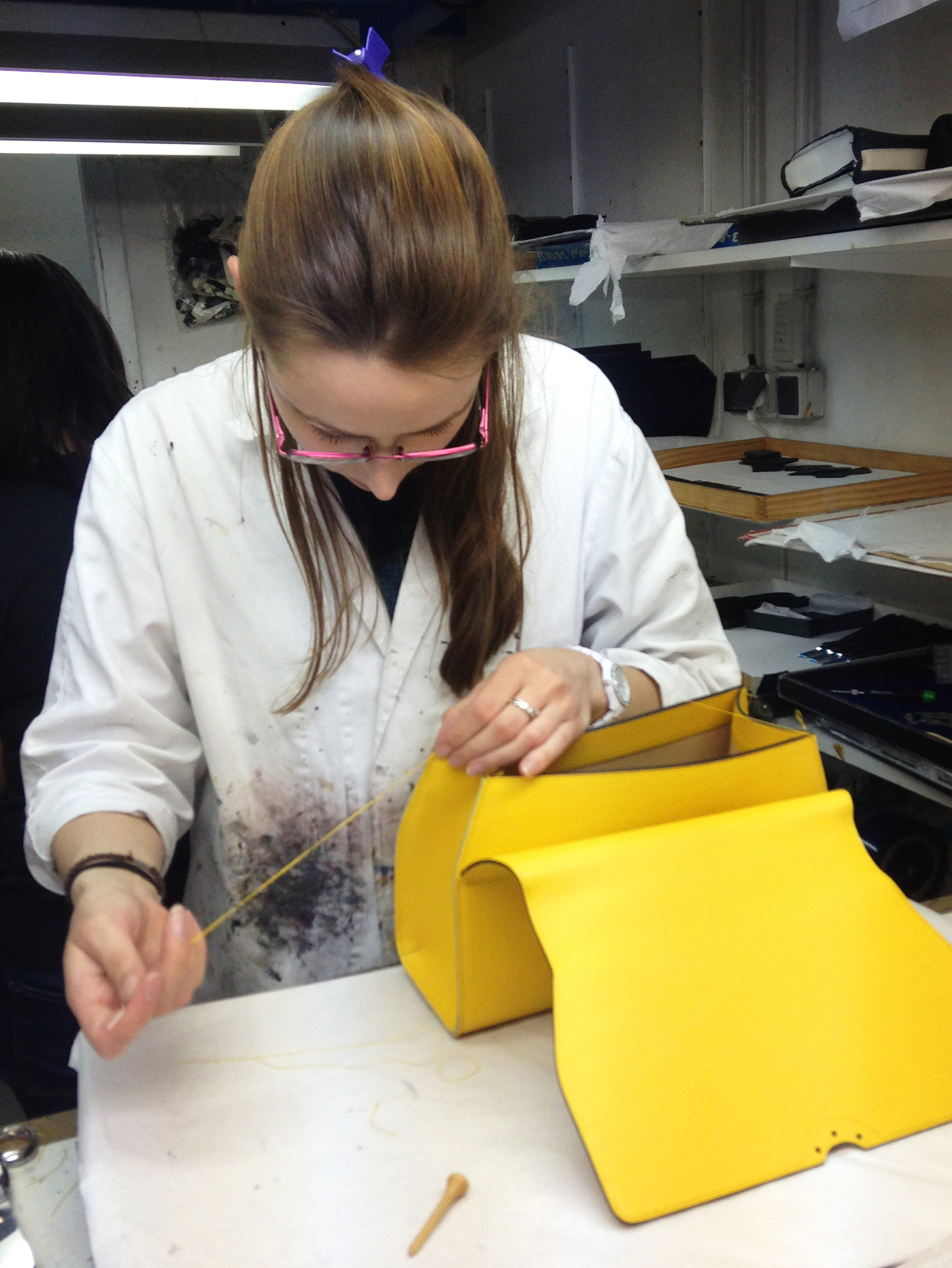 An employee sews a Moynat handbag in an atelier above the company's boutique.

Working together, they rebuilt Moynat by going back to the roots of the craft, says Nair.

"We didn't have anything to look back on. We had a few pieces, but we didn't have anybody to tell us the story firsthand, so we had to do a lot of digging, a lot of what [Davin] calls 'the Jurassic Park moment.' We had to find things out, look at the DNA, find codes and then structure it. So it was really starting from zero."

These days, Moynat makes about 30 bags a week — mostly women's handbags and briefcases — which are all individually crafted by hand. Agathe Havlicek works in a small atelier above the Paris boutique. She hammers the stitching on a handbag, a step in traditional leather-goods making that's not practiced anymore. The 30-year-old spent years learning her craft at a French artisan school that's existed since the Middle Ages.

"This is passionate work because no bag is alike," Havlicek says. "And when you're creating a handbag with the designer, you really have to get inside his head and figure out what he wants."

Other artisans stitch by hand with long colorful thread or ever so slowly on a sewing machine. Staying close to a skilled work pool is important for the company. Moynat has another small workshop in a southern town that was once the capital of the French shoemaking industry. And its trunks are made in the city of Limoges, traditional home of cabinetmakers.

Moynat's two most popular bags today, the Pauline and the Rejane, sell for about $4,000 each. But listening to Davin describe what goes into making a briefcase, you realize what you're paying for.

"The lining is nailed, it's not glued, the case is made of one piece of wood that is sculpted so that it perfectly marries the lid," he says. "There are over 450 brass nails in this briefcase and they're all hand-nailed."

Davin clicks the bag shut with the specially patented and hand-cast cat's tongue lock. But the company doesn't advertise and you can't buy a bag online. The only way to get one is to come to Paris and visit the Moynat boutique at 348 Rue Saint Honore.