Accessibility links
Movie Review - 'Mortal Instruments: City of Bones' - Good Vs. Evil, Once More With (So Much) Feeling When her mother is abducted by a demon, a teen (Lily Collins) learns that she comes from a line of Shadowhunters, who defend the world from supernatural beasties. Directed by Harold Zwart (the latest Karate Kid) it's the first film in a planned franchise based on Cassandra Clare's novels.

Good Vs. Evil, Once More With (So Much) Feeling

Good Vs. Evil, Once More With (So Much) Feeling 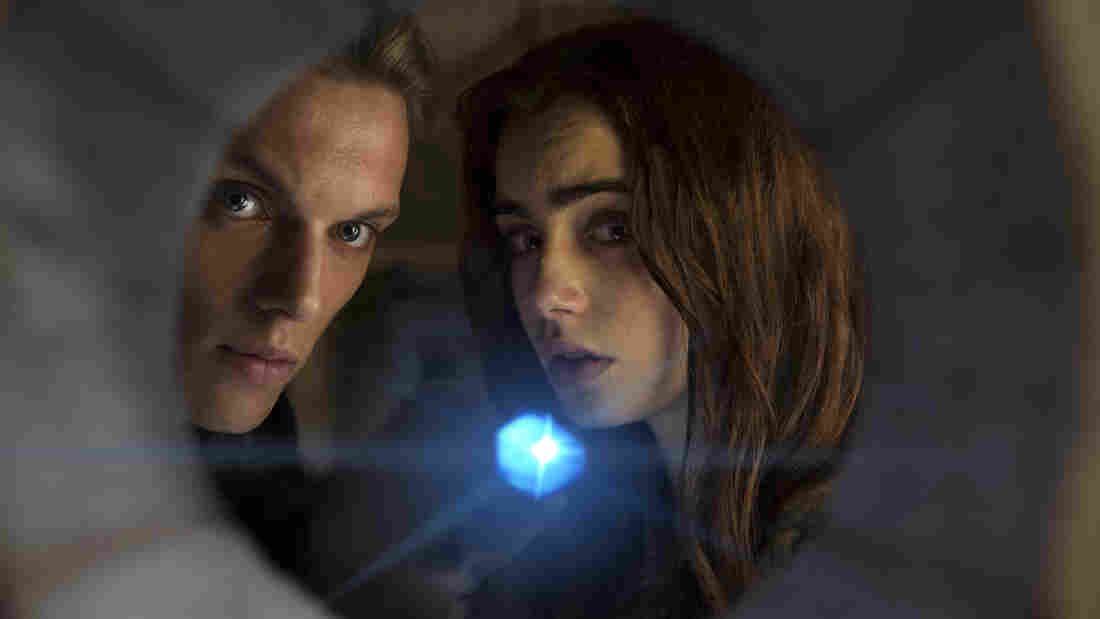 Jace (Jamie Campbell Bower) and Clary (Lilly Collins) are Shadowhunters — they are teens, and they are special — in the first of a threatened series of half a dozen films based on Cassandra Clare's Mortal Instruments novels for young adults. Or perhaps, at 2 hours 10 minutes, this is all six films. We may have misunderstood. Rafy/Sony/Screen Gems hide caption

The Mortal Instruments:
City of Bones

Rated PG-13 for intense sequences of fantasy violence and action, and some suggestive content

It's time for mom and Clary to have the talk.

No, not that talk. Jocelyn (Lena Headey) needs to tell teenage Clary (Lily Collins) about angels and demons, vampires and werewolves, magic chalices and sacred blood — not to mention hidden sanctuaries, interdimensional portals, the identity of her father and the existence of an unknown brother. Plus something nutty about J.S. Bach.

No wonder she's been putting it off.

Too late now: The Mortal Instruments: City of Bones has begun, Jocelyn's in a self-induced coma and Clary is being pursued through a New York that looks a lot like Toronto. When it doesn't look like a generic CGI monsterland.

There are five more novels — one as yet unpublished — in the series that inspired this combined beast-impaler/bodice-ripper. But it's hard to imagine what's left to throw in the hopper: This installment already features hefty chunks of the Twilight saga, a few dollops of Harry Potter and bits of Arthurian legend, all upholstered in fashions that might have shamed Siouxsie and the Banshees.

(Note to filmmakers: Having your teenage protagonist complain that she's dressed like a hooker doesn't excuse dressing her like a hooker.)

At the beginning, Clary is an auburn-haired aspiring artist who's begun to draw runes, though with neither intention nor understanding. She and Simon (Robert Sheehan), the chum who wants to be so much more, visit a Goth-style disco. There, Clary realizes that she can see people no one else can.

Well, not people, exactly; more like models from some '80s Helmut Newton photo shoot. Some of them are demons passing for human, the rest angels who are half-human. The latter are called Shadowhunters, and Clary, it will turn out, is one of them. Mom didn't mention that, either.

Poor Simon is just a muggle, known in this supernatural subdivision as a "mundane." But he's sure to get transformed, although a demotion seems as likely as an upgrade. 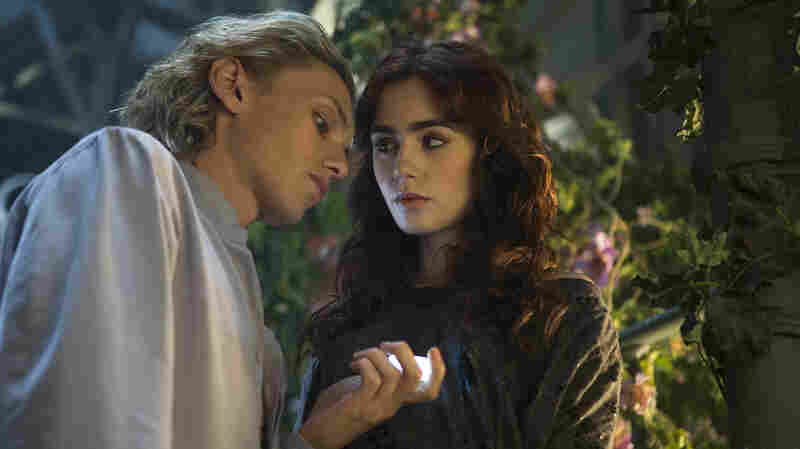 Jace helps Clary as she sets about uncovering the truth about her unsuspected heritage as one of the chosen few who defend humans from things supernatural, and also he is pretty and blond and dreamy and distracting. Rafy/Sony/Screen Gems hide caption 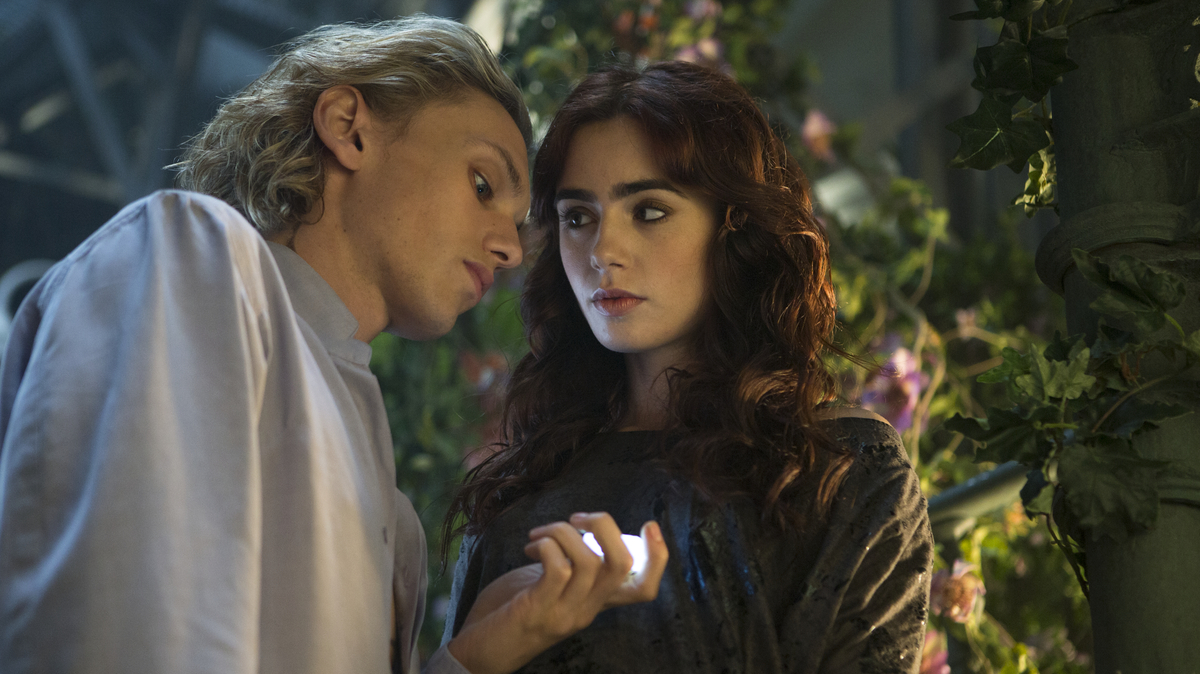 Jace helps Clary as she sets about uncovering the truth about her unsuspected heritage as one of the chosen few who defend humans from things supernatural, and also he is pretty and blond and dreamy and distracting.

There are only a few good Shadowhunters left, apparently. In fact, the City of Bones is a catacomb filled with the skeletons of their departed. But that won't be on the final exam, since the movie spends only a few minutes there.

Clary finds herself allied with Jace (Jamie Campbell Bower), a pouty blond pretty-boy Shadowhunter who makes her all tingly. That's problematic, since whenever the battling stops so the potential couple can flirt, the dialogue descends from the silly to the downright mortifying. One make-out session actually includes a Demi Lovato love ballad.

Jace and his cohorts live in an invisible Hogwarts-like refuge — impregnable, of course, but only until it isn't. Among the Evil Ones who might come knocking is archvillain Valentine, played by Jonathan Rhys Myers, who hasn't looked so much like David Bowie since he played a Bowie-like rocker in Velvet Goldmine.

Valentine has a thing about blood that's part Satanism, part Nazi eugenics. But to make his sanguinary cocktail, he needs a Grail-like cup that Jocelyn has hidden. Clary, as you will have suspected by now, just might know where it is.

Director Harold Zwart, who did that Karate Kid remake with Will Smith's son, handles this nonsense professionally: The art direction is stylish, the editing dynamic and the special effects respectable. There are even a handful of witty moments. If only Zwart could have handled the mushy stuff without words, City of Bones might have escaped being laughable. If only.

Aside from the giggles induced by the romance-novel bits, the movie's principal hazard is exhaustion. There are too many characters, and too many of them spend too much time morphing into something else. Five more like this? That would be demonic.