Accessibility links
With Pot Legal In Washington, Will Buyers Stay Underground? State regulators are putting the finishing touches on rules for the new state-sanctioned recreational marijuana market. The man hired to help shape those rules says that for state-licensed pot stores to succeed, police have to toughen up on the black market. 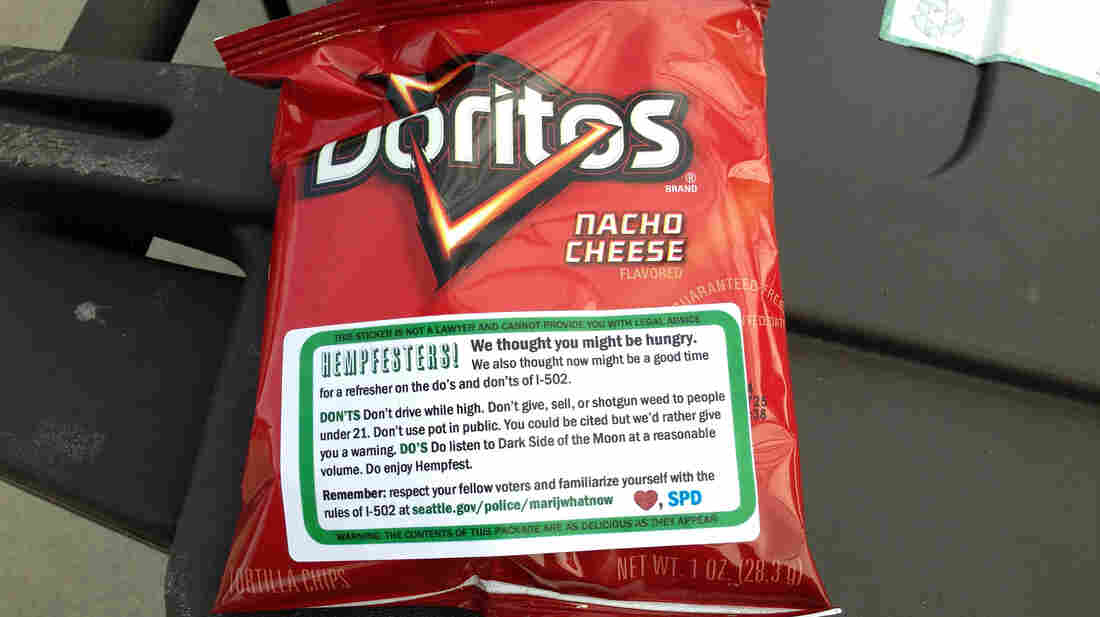 Seattle law enforcement's mellow attitude toward pot was on display at this year's annual Hempfest, where the cops were at the gate — handing out bags of Doritos. Martin Kaste/NPR hide caption 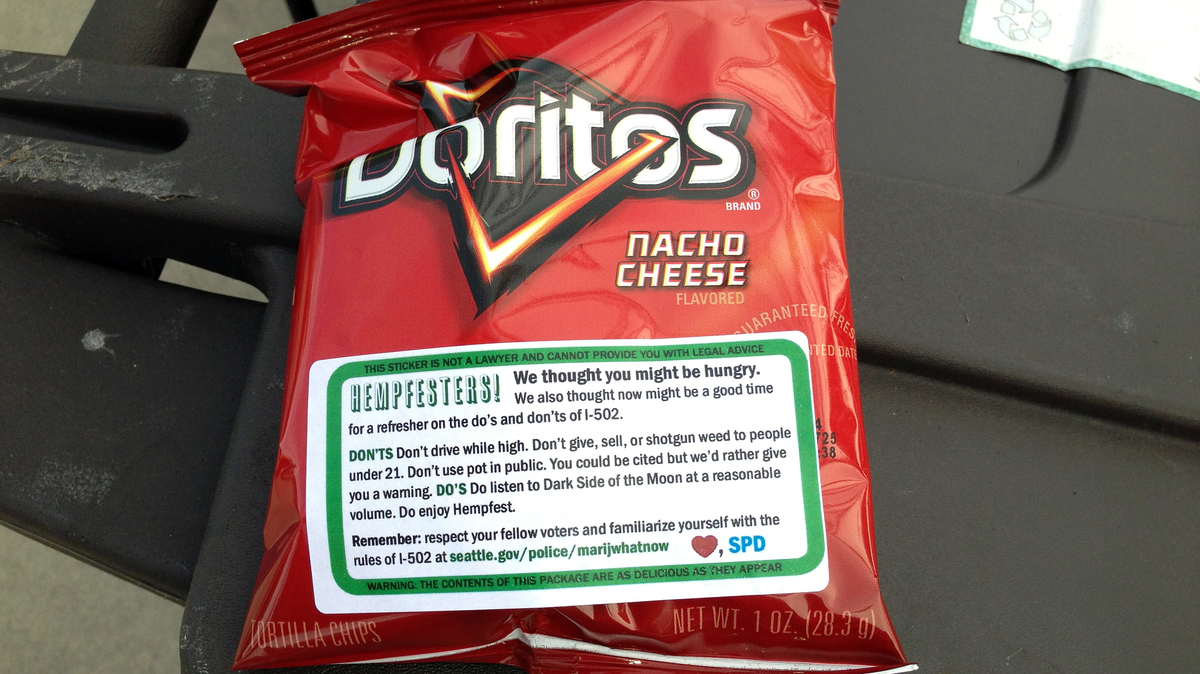 Seattle law enforcement's mellow attitude toward pot was on display at this year's annual Hempfest, where the cops were at the gate — handing out bags of Doritos.

In Washington state, regulators are putting the finishing touches on rules for the new state-sanctioned recreational marijuana market. And the man hired to help shape those rules is raising a warning to local law enforcement: toughen up on the black market.

Law enforcement's mellow attitude toward pot was on display at this year's annual Hempfest in Seattle over the weekend. The cops were at the gate — handing out bags of Doritos. The bags came with stickers warning people against smoking in public or driving high, as well as some playful advice about listening to Pink Floyd's Dark Side of the Moon at a reasonable volume and enjoying Hempfest.

It's legal under state law for adults to carry up to 1 ounce of pot. The thing is, there still isn't any legal way to get recreational marijuana; the state-licensed stores won't open until next year. But the police aren't asking questions about that.

"We don't really concern ourselves with how they got it," says Sgt. Tony Bailey, operations chief for Hempfest.

But maybe the cops should concern themselves with where the pot is coming from, argues Mark Kleiman, the UCLA professor hired by the state to help plan for legal pot. He recently warned the Seattle City Council that it may become necessary for local cops to be a little less groovy.

"The illicit market is a paper tiger. But a paper tiger doesn't fall over until you push it. And I don't see anybody right now ready to push," Kleiman says.

Kleiman thinks Washington has an opportunity to demonstrate to the world that you can undermine the black market with regulated pot. But he says that opportunity may be lost if people continue to feel safe buying from dealers on the street corner "or going to your untaxed, unregulated, not-really-legal-but-sorta-kinda-legal medical outlet." It seems to Kleiman, "that circle needs to be squared."

The mention of medical marijuana makes Kleiman's argument especially sensitive. Medical growers have become major suppliers to recreational users — sort of a "gray market." People like Kleiman think that'll have to stop if the new state-licensed stores are going to succeed. But any suggestion of a crackdown on medical pot triggers some strong reactions.

"It's just an idiotic idea," says Doug Hiatt, an activist lawyer for medical marijuana producers. "It's just asinine, it's ridiculous to say that we should be putting resources into busting people and stuff so that they can make their little state monopoly system work."

On the other side of this is Alison Holcomb, the ACLU lawyer behind the initiative that legalized pot. She really wants to see the licensing system succeed. She doesn't think cities need to spend more on drug enforcement, but she would like to see local police make what she calls "a political decision" to push marijuana out of the shadows.

"Washington state voters wanted to do something different. Now we have a legal system for meeting the demand for marijuana. You gotta play by the rules," she says. "If you want to make money growing and selling marijuana, great, get a license."

Washington state's experiment starts in earnest next spring or early summer when the first licensed stores are likely to open. Only then will it become clearer whether people will switch to government-licensed marijuana voluntarily or whether they need to be pushed.