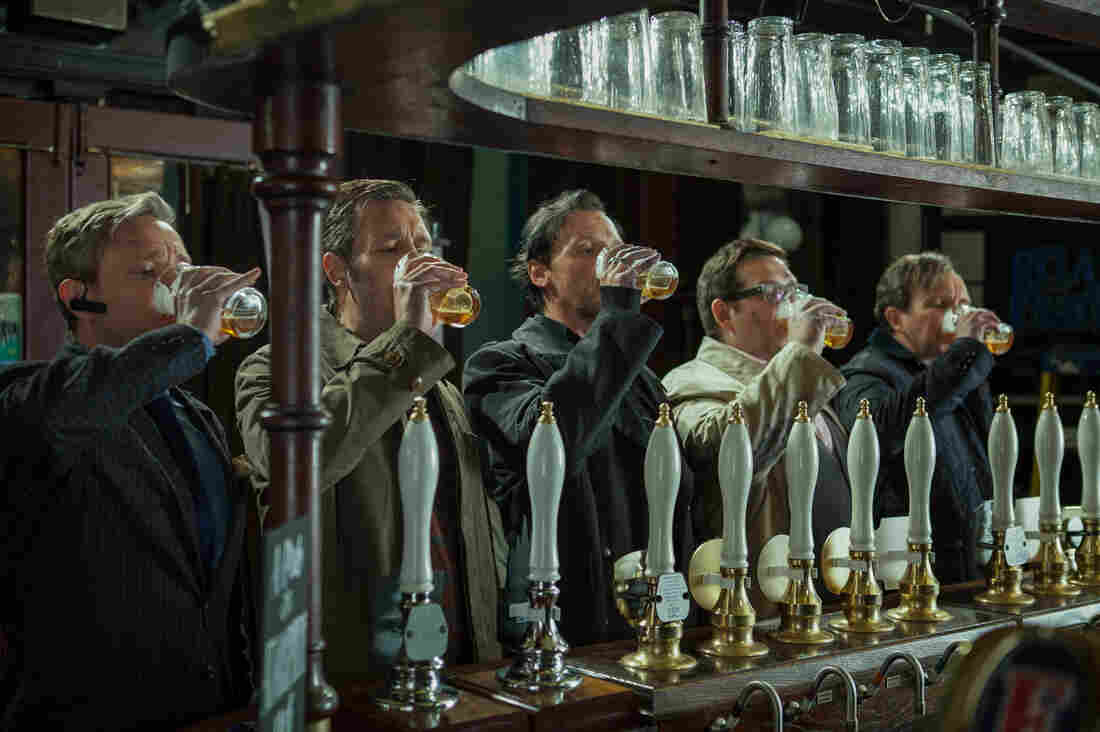 If you've ever participated in a miserably long pub crawl, you'll understand the plight of the characters in The World's End, the latest from Simon Pegg, Nick Frost and Edgar Wright. The film follows five old high school friends who reunite to finish a pub crawl they started 20 years earlier. But as they travel from pub to pub in their old hometown, they find strange, supernatural things start to happen.

In 2004, Pegg and Frost's zombie send-up Shaun of the Dead gave the English comedy pair a cult following that grew with their follow-up movie, Hot Fuzz, about a gung-ho London cop who's transferred to a sleepy English village. Those films were both directed by their friend Edgar Wright, who also made the visually innovative Scott Pilgrim vs. the World.

On The World's End being about nostalgia ... and having a hard time connecting with that

Frost: "I tend to try and just look forward. I'm not a very nostalgic man, really. I think if I ever need to look back I'd do it with music, essentially, or food. I've got an amazing recipe for a beef stroganoff that my mom taught me to cook when I was 10, and so when I cook that and eat it it's kind of, for me, the ultimate time machine. I think that, and listening to Hatful of Hollow by the Smiths, that's kind of all the nostalgia a man needs."

On wanting to portray "the real England"

Pegg: "We've always been very keen to not set our films in picture-postcard England. Usually in a movie when you cut to the U.K. you'll hear a little bit of 'Rule, Britannia!' and you'll see a red bus go by, and Big Ben will strike, and it will be snowing and someone will step off the Millennium Wheel, the London Eye. It was important to us to set our films in the real England, in the real places where we grew up, the suburbs of London, not London itself."

On not talking down to American audiences

Pegg: "We don't want to be trans-Atlantic with our movies, in terms of, we don't assume the American audience have to be talked down to in any way, or soft-soaped or given some kind of chocolate-box version of what they're seeing. I think Shaun of the Dead proved to us that we could be resolutely British and it would still work [in the U.S.]. In fact, it would work because of that. A lot of films [that] want to get an American distribution deal will put stuff in specifically to try and secure that, and [it] ends up just feeling fake."

Frost: "I never wanted to act. I never wanted to be an actor, but ... I'm a romantic, and I always had this weird romantic idea of being some terribly poor Soviet novelist living in like a windy garret drinking a watery potato soup ... and writing. I kind of fell in love with a girl called Cheryl, I was 25 and she was 19, and I really fell head over heels, and so I essentially wrote this novel to show off to her because I think she liked the fact that I wanted to be a writer. So I kind of did it to impress a girl. But I didn't have a table. I just had an ironing board and a typewriter."

Pegg: "I always say, looks fade but funny is forever. I tell potential wives that."

Pegg: "We wanted to make a Rosencrantz and Guildenstern Are Dead of the zombie world. And have this strange side story happening in the Romero universe, the great zombie films that George Romero created, and he created that whole mythology as well. The whole modern zombie was basically George's doing. He combined old voodoo stories and this cannibal fad there was in the late '60s, and he created this cannibalistic modern zombie, which is all his idea. I think shows like The Walking Dead and Shaun of the Dead, and anything, really post-George, owes him a huge debt of gratitude."

On their films as a "trilogy"

Pegg: "At the time of Shaun of the Dead we just wanted to get that film made. We didn't know if we'd ever get to make another film again, so it was just about that. When we made Hot Fuzz, and we realized we could make a thematic sequel to Shaun of the Dead, not a direct one, but one that kind of displayed similar approaches, addressed similar themes. We were dealing with protracted adolescence again, we were looking at the notion of loss of identity, the struggle of the individual against the collective. There's a deeper connection to the films that I think is really easy to trace when you watch them together."