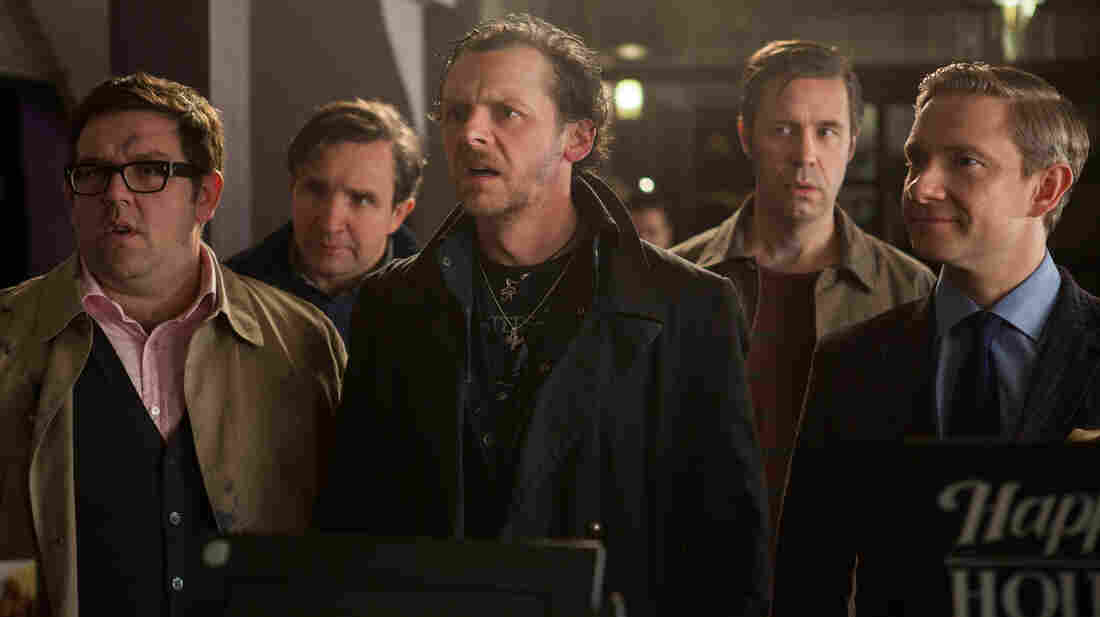 The World's End is a world-shaking, genre-bending, sci-fi comedy, and a splendid capper to what British writer-director Edgar Wright and actor-writer Simon Pegg call their "Cornetto trilogy," for an ice cream they eat on their side of the Atlantic. This one's arguably the best of the three, but who wants to argue over gorgeous satires like Shaun of the Dead, Hot Fuzz and The World's End? It's like ice cream flavors: Have them all.

The World's End is also the name of a suburban English pub, the last of 12 on a projected odyssey — one pint per establishment, plus shots — devised by Pegg's protagonist, the 40ish child-man Gary King. He and his mates tried the same odyssey in their teens but gave up before they hit The World's End under humiliating circumstances. Now he wants them to reunite in their hometown of Newton Haven and finish the job.

His old pals — Martin Freeman's Oliver, Paddy Considine's Steve and Eddie Marsan's Peter — are respectable these days, with careers and families. His one-time best friend, Andy, played by Nick Frost, is a conservative finance type who hasn't spoken to him or had a drink in 16 years. For Gary, though, the manhood thing hasn't quite worked out. Drinking his way to The World's End will be his revolt against time, a ringing declaration of existential freedom, though rather undermined by his self-centeredness and raging alcoholism.

Gary would be less fascinating in the hands of anyone but Pegg and Wright. In some films, he'd be glorified for his nonconformity; in others, he'd be condemned for being a jackass and wind up in Alcoholics Anonymous. Here his instincts are proved right and wrong. His resistance to conformity is laudable, his behavior pathetic. The question is whether he can keep the one and lose the other.

The filmmakers take a mere half-hour to cover the ground of an entire subgenre of American child-man bromance comedies, and then they go further. Striding into their first pub, Gary — in a long, Matrix-style coat — anticipates a returning hero's welcome. He finds instead that the watering holes have been taken over by corporations serving fake "real" ale and taste-alike lagers. The food, the dartboard and the music are interchangeable, the bartenders grim.

Later on in the movie, his buddy Oliver's sister, played by Rosamund Pike, arrives at one pub to incinerate Gary with her stares. He'd seduced and abandoned her in the loo of this very place all those years ago. He'd like to seduce her again, but he has something more urgent to discuss: People they know have gotten stranger.

I can't really tell you where the movie goes from here — a note in my press kit from Wright said, "Be a mate and don't spoil it." I can say he and Pegg have spoken openly about the importance of John Wyndham's sci-fi novels, including The Midwich Cuckoos. I can also talk about how they play with the genre in Shaun of the Dead, where George Romero's cannibal-zombie conventions were used to satirize a certain species of middle-class English complacency, and Hot Fuzz, which used buddy-cop shoot-'em-up tropes to tackle the vicious underbelly of quaint English villages. The World's End employs sci-fi the same way.

These are not genre parodies. Lowbrow genres are used for higher ends, but they're still lowbrow and fun. The last half-hour of The World's End is one killer set piece after another, the action brilliantly staged and shot in Wright's syncopated, percussive, hyperbolic style. The all-star cast is perfection. The ending is antic yet somehow judicious. Those wise fools Wright and Pegg have made the year's most uproarious movie.