Accessibility links
Obama Campaigns For College Affordability Plan The president returned from vacation to take to the road, touring college towns in New York and Pennsylvania to talk about higher education. He's proposing a system that would rank colleges' affordability, which could then be tied to federal aid — but in Washington, a budget battle is waiting. 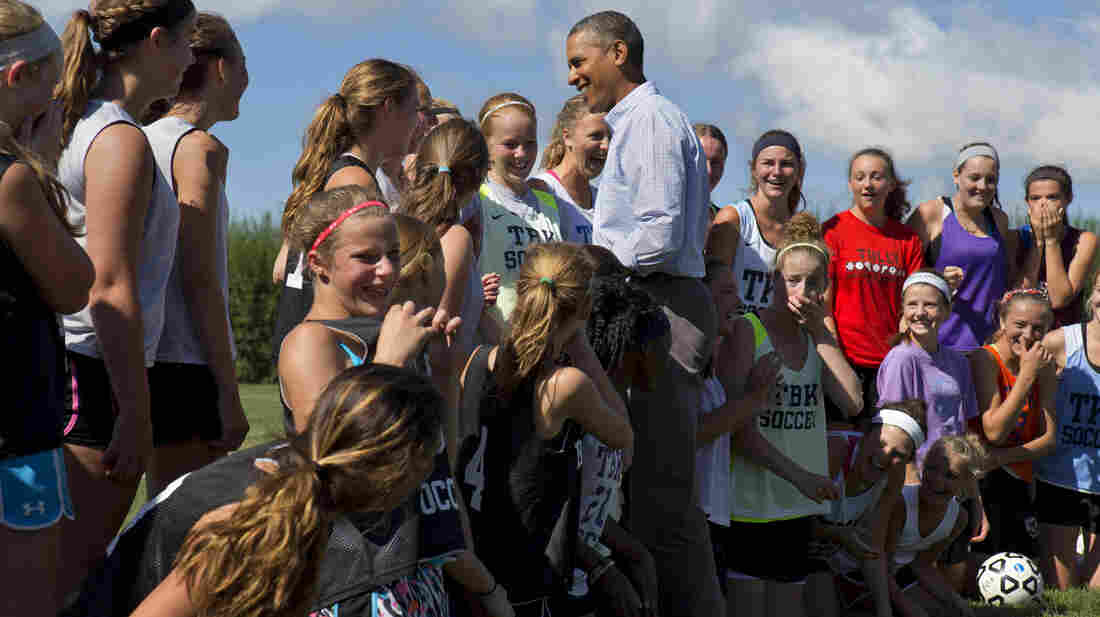 President Obama makes an unannounced stop to talk with the Tully Central High School soccer team about their plans for college in Tully, N.Y., on Friday. Jacquelyn Martin/AP hide caption 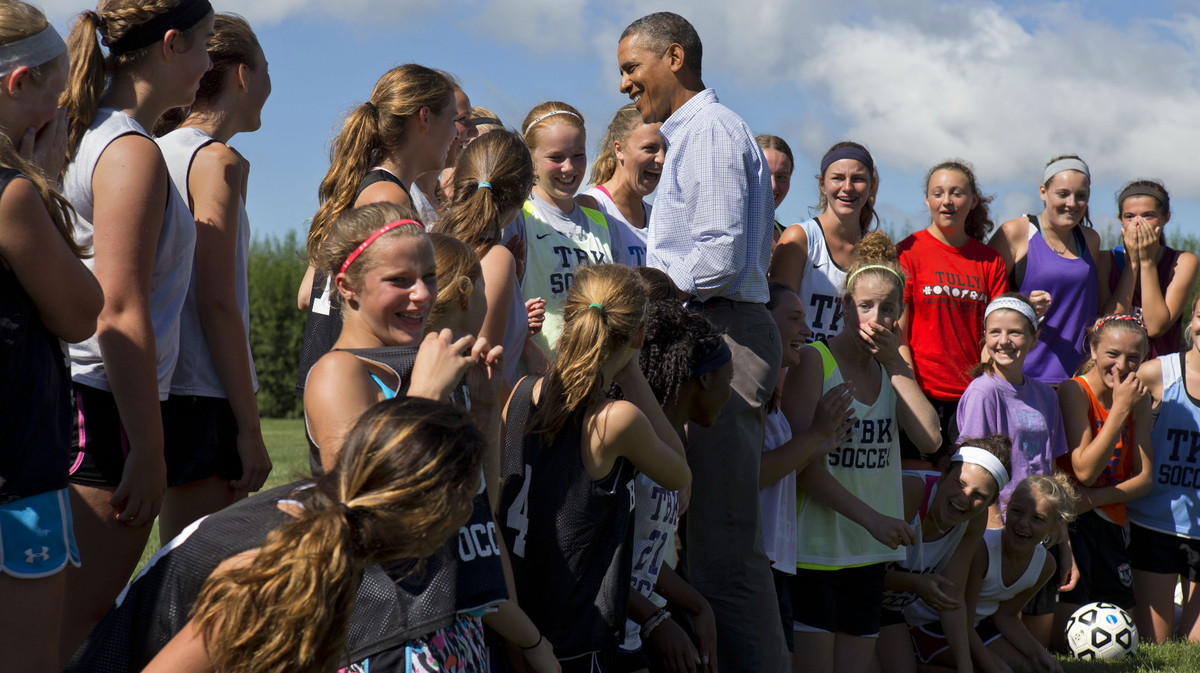 President Obama makes an unannounced stop to talk with the Tully Central High School soccer team about their plans for college in Tully, N.Y., on Friday.

President Obama toured Pennsylvania and New York by bus on Thursday and Friday to promote his college affordability plan.

He's proposing a affordability-rating system that would steer federal aid, but a budget battle with Congressional Republicans is looming.

The tour had a back-to-school theme, but at his stop on Thursday, the fall semester hasn't even begun. Obama spoke to a packed high school gym in Syracuse.

"I know you're still on summer vacation," he told the crowd. "You've got a few more days. So taking the time to be here when you've still got a little bit — that last little bit — of summer break, that's a big deal."

Obama can appreciate how the Syracuse students feel, since Congress is also on its own extended summer recess, offering a temporary respite from the long-running battle over government spending levels.

Obama told a town hall meeting in Binghamton, N.Y., that when lawmakers return in September, he'll keep pushing to restore funding for Head Start and other programs that have been squeezed by across-the-board budget cuts.

Obama acknowledged that rising health care costs still pose a long-term challenge for the federal budget, but he argues there's no immediate crisis. In the short term, the tide of red ink is rapidly receding, though some lawmakers continue to insist on additional cuts.

"Unfortunately right now the federal budget generally has been a political football in Washington," he said.

On Friday, the president surprised the girl's soccer team at Tully Central High School in Tully, N.Y. Obama talked with the soccer players about sports and summer jobs, and then he turned to the main message of this bus tour: college affordability.

"I'm assuming everybody here is going to want to go to college," he said, to resounding affirmation from the players.

Obama says higher education is the best investment young people can make in their future, but with tuition costs outstripping paychecks, many families face an unpleasant choice between a heavy debt load or skipping college altogether.

Obama's plan includes a new ratings system to help families find the best bargains in college. He also wants to use those ratings to steer federal aid, though that part of the proposal would require approval from Congress.

"You know, that's always challenging, but these are ideas that should have bipartisan support," he said. "Of course, so should Obamacare. It's actually a really good idea."

For Democrats, Scranton Is The New 'It' City

The final stop on the president's bus tour was Lackawanna College in Scranton, Pa., the hometown of Vice President Joe Biden. Obama noted that it was five years ago Friday that he first publicly announced Biden would be his running mate.

The vice president joined Obama on that last leg of the tour, and it was a happy homecoming for the blue-collar Biden, who's mulling his own bid for the White House in 2016.

"The people who grew up in neighborhoods like this one, the one I grew up here in Scranton, have dreams just as big, just as expansive, and just as accomplishable as any place in the world," Biden said.

After the Scranton event, Obama traded his bus for Air Force One, and headed back to Washington to enjoy the last few days of summer before Congress returns for what could be a very stormy September.