Accessibility links
Ancient African Religion Finds Roots In America African-American followers of Yoruba say it offers a spiritual path as well as a sense of cultural belonging. Followers of Yoruba are adapting its teachings to a modern context, while connecting with their heritage. 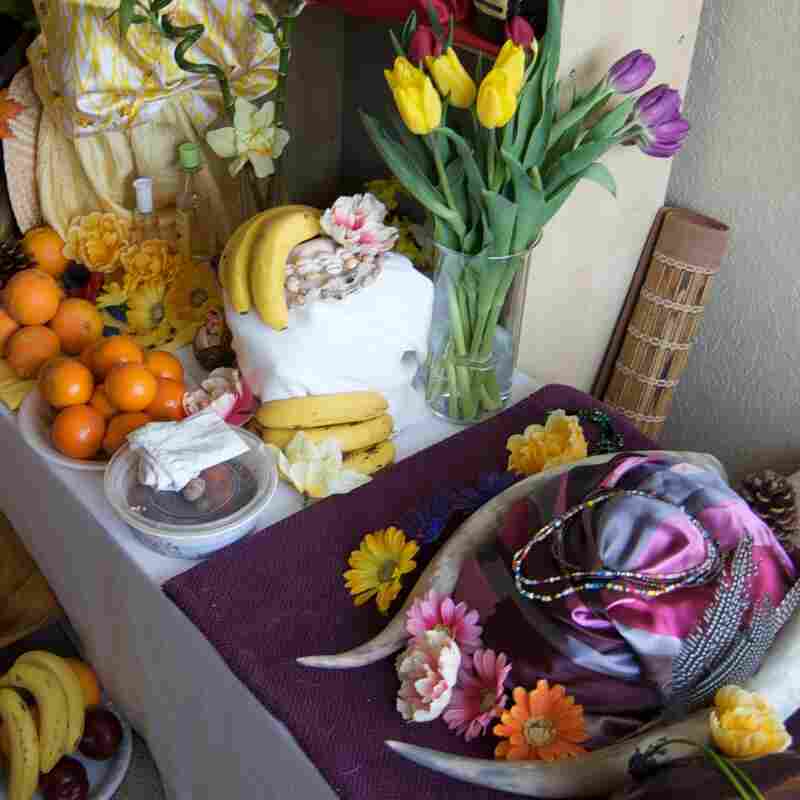 Priest Ifagbemi has an elaborate shrine to Yoruba's gods in his home near Seattle. Christopher Johnson/NPR hide caption 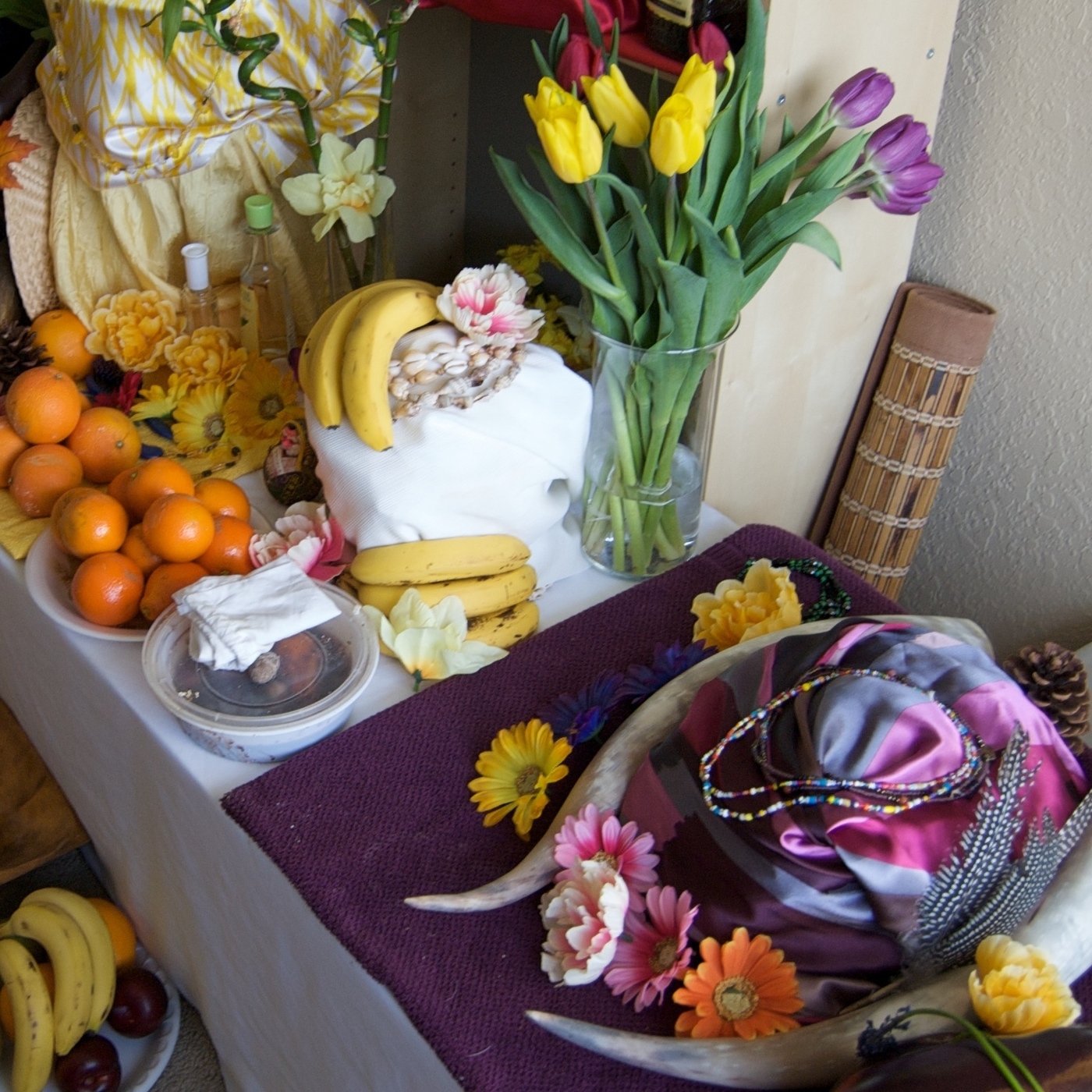 Priest Ifagbemi has an elaborate shrine to Yoruba's gods in his home near Seattle.

In the suburbs of Seattle, an ancient West-African religion is gaining followers. Yoruba, from the Yoruba people of Nigeria, has been spreading across the U.S. for the last 50 years.

The religion is particularly popular with African-Americans who find it offers a spiritual path and a deep sense of cultural belonging.

Wesley Hurt's Yoruba story begins the night he met his wife, Cheri Profit. It was nearly eight years ago, not long after a tour in Iraq. He had just gotten off for weekend release from an Army base in Tacoma, Wash.

Hurt was ready to go out and have a good time. He and some friends went to a club, where he saw Profit. She avoided him at first, but eventually he got her attention. Not long after their meeting, they were a couple.

They bonded quickly — over food, politics and religion. These two seekers were constantly rethinking their relationships to the divine.

"With my mother, we were Jehovah's Witness, we were Pentecostals, we were Baptists, we were Seventh-day Adventist," Profit says. "It did not work for me."

Hurt had been a Southern Baptist for most of his life.

"And a lot of things have brought me to try to find my spirit," he says. "So ... of course, you start off in church asking questions, and, you know, I didn't get the answers that I wanted."

So Hurt, a 32-year old Atlanta native, started exploring — first Judaism, then Islam. He was looking for something that spoke to his spirit and to his blackness. About two years ago, he found a home in one of Yoruba's esoteric branches, called Ifa.

"What brought me to Ifa is that how close this tradition is linked to us as African-Americans in this country," he says.

This feeling is familiar to many black Americans who practice Yoruba today, just as it did with those who have been practicing for years. In New York City in the 1950s, African-American Yoruba communities began to grow alongside a surging black nationalist movement.

For several decades, the religious tradition spread down the East Coast and westward, to Chicago, to Oakland and Los Angeles — and to the Seattle area, where Hurt met an Ifa priest named Ifagbemi.

At a recent gathering, Hurt, Profit and a group of about a dozen other believers worshiped in a circle on the carpeted floor in Ifagbemi's bare dining room. The priest sat with them, shifting between English and the Yoruba language as he lead them through an Ifa ritual.

Ifagbemi's path has been a lot like Hurt and Profit's: a black American, born in Topeka, raised in a Christian home. He embraced Ifa as a young adult and later initiated into the priesthood. For nearly four years, he has headed this small group of devotees.

"When you enter into this stuff, you're enter into a sacred relationship with people that you're working with," Ifagbemi says. "I think it's a privilege."

He runs the group mostly from his apartment, where he has converted one of the carpeted bedrooms into a sacred space full of shrines to the gods of Yoruba's pantheon, spirits called "orisa."

There's a long table covered with pure white cloth and spread with sliced watermelon, bananas and gin — gifts to the divine.

Along with a life of worship, Ifagbemi says part of his job as a full-time priest is to help people adapt this ancient religion to a modern, American reality. 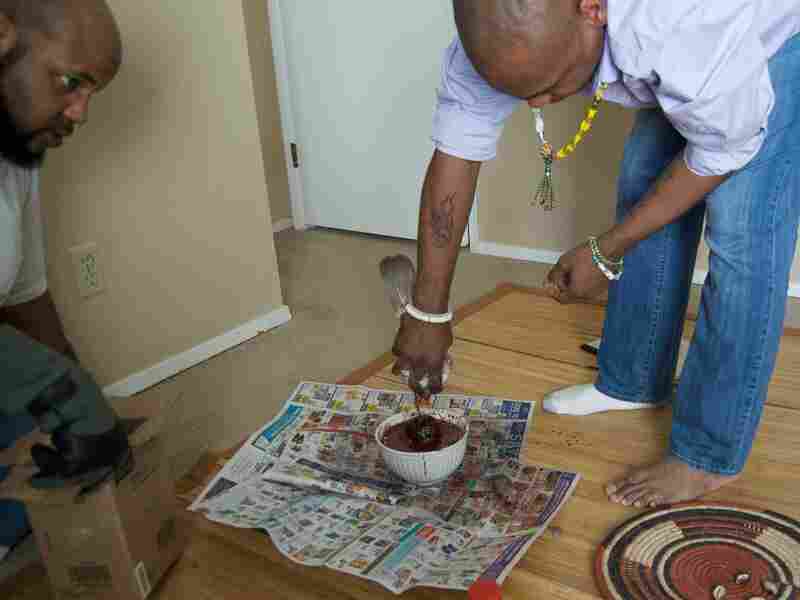 Wesley Hunt, left, and Ifagbemi perform a ritual in his suburban apartment for the gods of Yoruba. Christopher Johnson/NPR hide caption 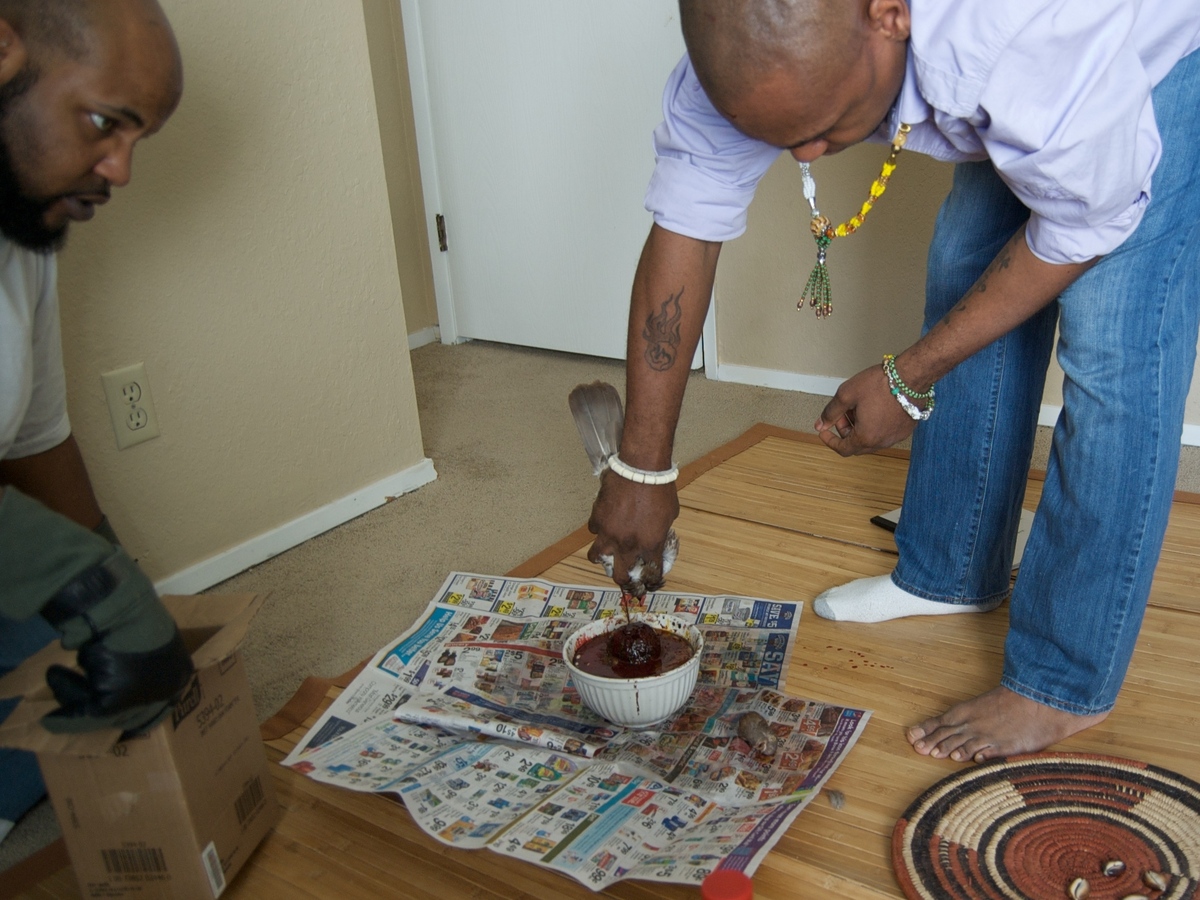 Wesley Hunt, left, and Ifagbemi perform a ritual in his suburban apartment for the gods of Yoruba.

"We're not African anymore," he says. "I need to sort of emphasize to a lot of African-Americans that yes, this is an African tradition, yes, we want to connect with our roots and whatever else. But our roots are here, too."

It's a lesson he's been impressing on Hurt and Profit. Ifa's tenets resonate with them: good character, respect for elders. Plus, there's an element of homecoming in the ways this African faith speaks to them as black people.

But it was different for Profit in the early days, when her husband introduced her to Ifa. "Initially — I'm not gonna lie — I was a little hesitant at first," she says. "It was just the general notion, you know, you shouldn't do that."

With Yoruba's shrines and statues and worshipers going into trance states, some newcomers admit that the African traditions might disturb the folks at church back home.

What helped calm Profit's worries was a ceremony where the faith came alive for her.

"They had the drums going, and the ladies were up dancing, and after a while, I was, 'Hey!' 'Cause I was feeling it! I got up, I danced, I was dancing — me and the other women, and it felt good," she says. "I've never experienced that in church, and I've been to church many, many times."

Tracey Hucks, chairwoman of the religion department at Haverford College, says, "for so many African-Americans, this tradition has been a space of freedom and a space of home."

She says blacks in America have been drawn to Yoruba for more than a half-century because it offers them an ancient spiritual heritage, one that predates slavery in the United States. At the same time, she adds, it helps them affirm their racial identities in this new world.

"And it also allows them to be able to affirm their black physicality, in a place that has said that, 'You represent anti-beauty in this culture,' " she says. "It is this religion that comes and says, 'No, you look like the gods of Africa.' "

Doing rituals for those gods, dancing for them, and finding fellowship with her community, Profit says Ifa just feels right to her.

Her husband, who had been searching for years for spiritual answers, has found his place, too.

Ifagbemi's congregants, seated together in the priest's apartment for an intimate ritual, are all on paths a lot like Hurt's. They're trusting Ifagbemi as their guide.

To close the ceremony, he shakes a rattle and calls, and everyone responds with Yoruba's most ubiquitous blessing: ase. It's like saying "amen."

For the young couple with ties down South, for the Ifa priest from Kansas and for his small flock near Seattle — so far away from Ifa's West-African roots — this old tradition has given its followers a new home.

Funding for this story came from a Knight Grant for Reporting on Religion and American Public Life, a program of the University of Southern California.