Accessibility links
Letterman And 'Tonight' Vet Go Behind The Scenes Of Late Night Fresh Air kicks off its late night TV theme week with a 1981 David Letterman interview, in which the host describes how late night TV changed the comedy business, and a 1988 interview with one-time Tonight Show executive producer Fred de Cordova. 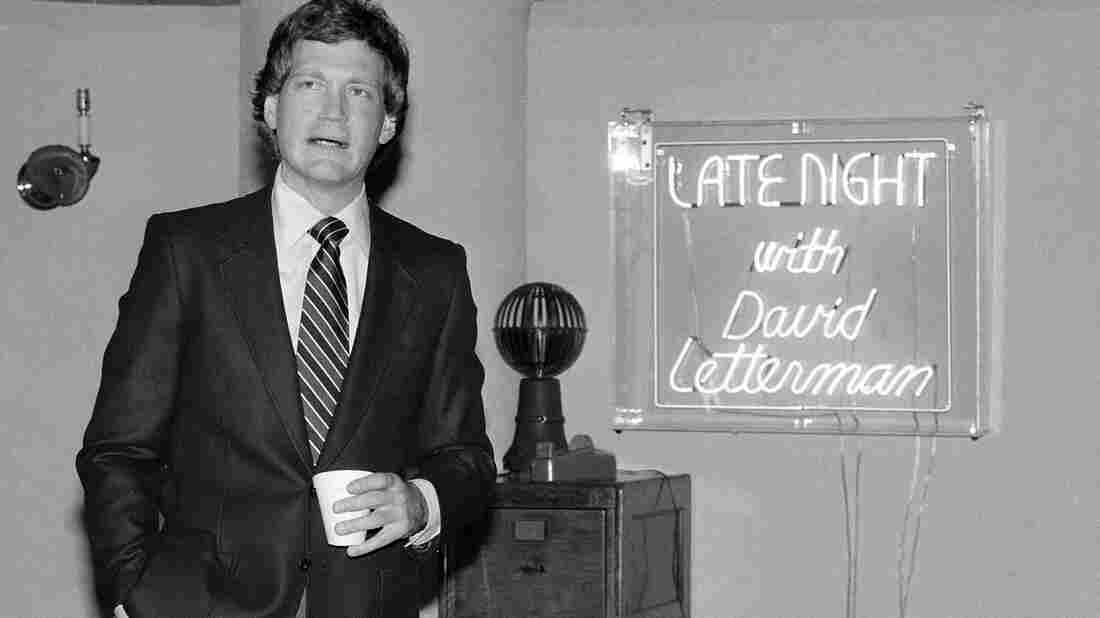 Imagine David Letterman sitting in the reception area where you work, going virtually unrecognized. That's how it was in 1981 when Letterman visited WHYY in Philadelphia to be interviewed by Terry Gross on Fresh Air, then a local program.

It was an interesting, in-between moment of Letterman's life. The year before, he had started a morning comedy/variety show on NBC. Suspecting the show wouldn't last long, Letterman did his Christmas show in the fall, in case the show was canceled before the holidays. It was, and in February 1982, just a few months after his Fresh Air interview, he premiered Late Night with David Letterman on NBC.

Letterman has now been a late night host longer than Johnny Carson was, for two different networks and two different shows. TV critic David Bianculli tells Gross, "When he wants to, he can be a great interviewer and can also be ... a genuine broadcaster: someone who can speak one-on-one, as if the camera is just a friend."

At the time of his Fresh Air interview, Letterman was best known for being one of Carson's substitute hosts on The Tonight Show. He described The Tonight Show audience as largely made up of tourists and people who had saved up to make it to a taping, so they often weren't hard to please.

[Before late night TV,] people never had the benefit of working toward a media goal. ... Now, it's different. If a guy thinks he's funny, he drops out of high school, moves to Los Angeles ... appears on [something like] The Merv Griffin Show and thinks he'll get a situation comedy.

"They're ready for an event," Letterman said, "and if you see something going awry on The Tonight Show, it is certainly never the fault of the audience, because the audience will give you every benefit of the doubt. And I've lost a few battles so I know what it's like, but they're always terrific."

"If you do one show a year or one show every three months or one show every four months, you have an awful lot of time to realize what a failure you've been," he said. "But we do kind of a baseball season: We do a show one night and we hope it's wonderful, and if not that, we hope it's good and we hope it isn't bad. But even if it's a great show or even if it's not such a good show, we do another show the next night and we have no time, except in self analysis, to decide why it wasn't good or even why it was very good."

Gross and Bianculli kick off Fresh Air's late night TV theme week by listening back to Letterman's 1981 interview, in which he discusses the 1981 comedy scene and the differences between morning and late night programming. (They also listen to more of de Cordova's interview, which you can hear by clicking the audio link at the top of this page.)

On the content of morning versus late night programming

"What you can do in the morning as opposed to what you can do at night is not so much dictated by the time of day as it is by the particular show. The Tonight Show generally considers itself to be an entertainment show and therefore would not want to do political interviews or things of that nature, and they've been quite successful at it.

"... On the [daytime] Phil Donahue show, chances are you're not going to do stand-up comedy. Again, it's more of a function of that show that dictates [it] than it is the time of day. At least, that's what I thought. Other people thought: In the morning, it's got to be housewife stuff because housewives are home and they're the only people that turn on television before 5 in the afternoon. And I never really believed that and even if it was true, it was always my desire to give them the option of something other than nail care hints and makeup and what to do with leftovers and so forth, and horoscopes and gossip."

"You have to be careful because if you do cross that line, then you've lost friends because nobody really wants to be the [butt] of a joke. It's a delicate line. Unfortunately, you do bloody somebody's nose inadvertently, but it was never our intent."

"... Now, it's different. If a guy thinks he's funny, he drops out of high school, moves to Los Angeles, prepares five minutes, appears on [something like] The Merv Griffin Show and thinks he'll get a situation comedy. And it's happened, and it will continue to happen.

"... The guys who began were doing it to survive. These were real fighters. They were in it for the long haul. And they would do the kind of material that would quickly establish [them] as being funny. And they could sustain it and it could go on forever because they were really doing it for a living. The other guys are looking to get into television situations."

Which Comedians Of Color Should Be Late-Night TV Stars? May 16, 2013

"The best person in a nightclub situation now is Bill Cosby. It's just unbelievable what this man is capable of doing. [He] doesn't really tell jokes per se, but he comes on stage and sits down in a chair — and this is interesting because the purpose of your appearance there is that you're supposed to dominate this group and to dominate and control from a seated position is interesting. And he does it. He's unbelievable. I would guess he would be the best in a nightclub situation.

"Then there are the newer guys. Steve Martin is just a phenomenon. Then I have my own peers who I think are great. There's Jay Leno, who I think is probably the ... best at observational material."