Accessibility links
Clarence B. Jones: A Guiding Hand Behind 'I Have A Dream' Clarence Jones played an integral but mostly unseen role in the 1963 March on Washington. As Martin Luther King Jr.'s legal adviser, Jones assisted in drafting King's landmark speech, and drew from a recent event in Birmingham, Ala., to craft one of the speech's signature lines. 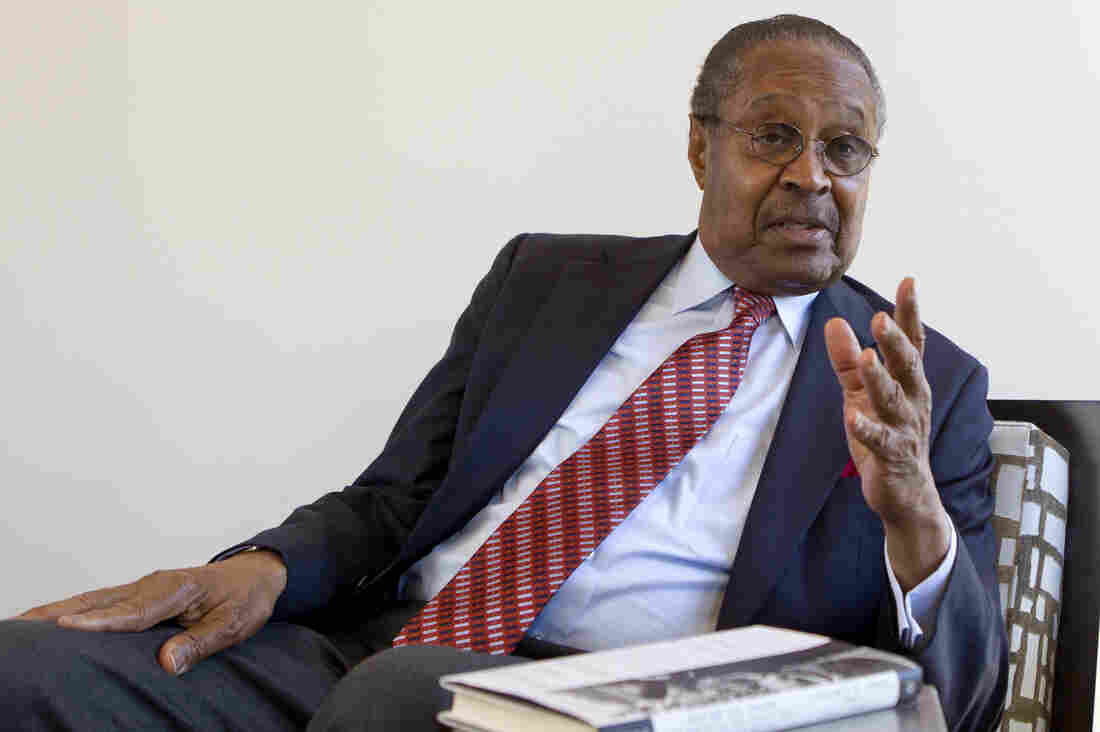 Clarence B. Jones this month in Palo Alto, Calif. As Martin Luther King Jr.'s attorney and adviser, Jones contributed to many of King's speeches, including his famous speech at the March on Washington in 1963. Norbert von der Groeben/Reuters/Landov hide caption 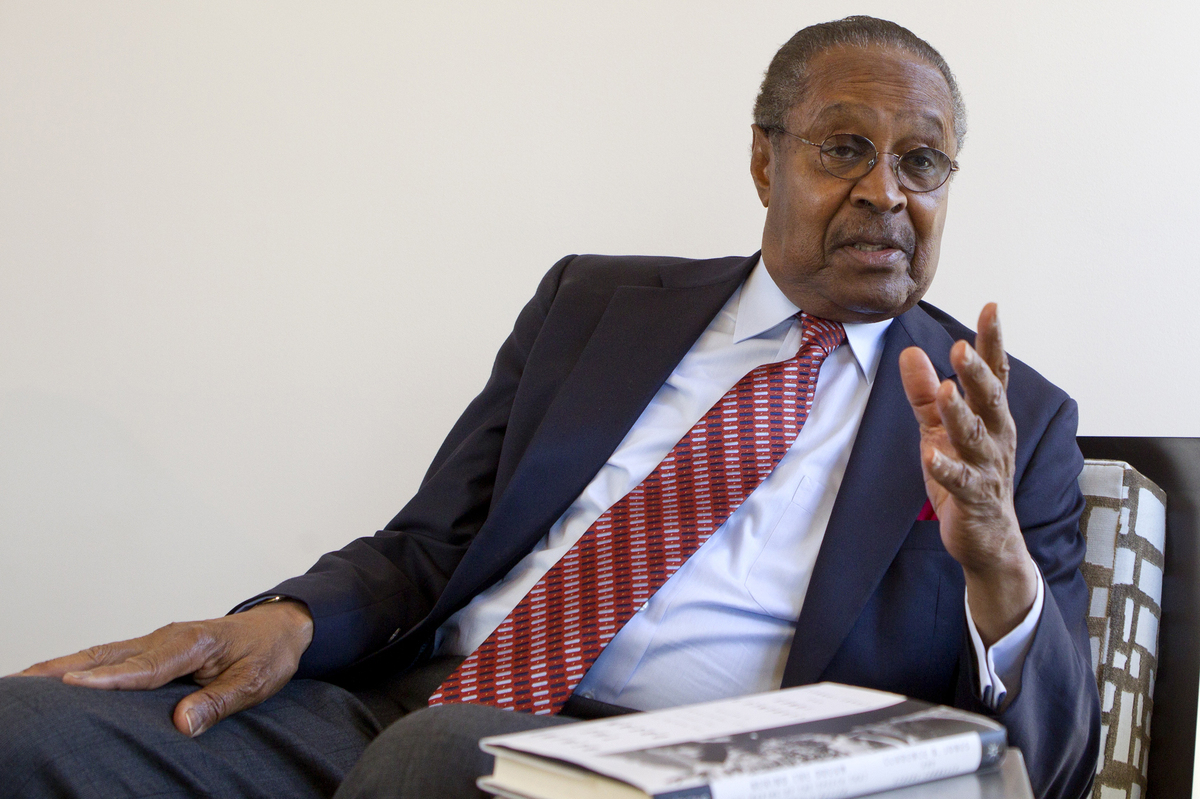 Clarence B. Jones this month in Palo Alto, Calif. As Martin Luther King Jr.'s attorney and adviser, Jones contributed to many of King's speeches, including his famous speech at the March on Washington in 1963.

For the month of August, Morning Edition and The Race Card Project are looking back at a seminal moment in civil rights history: the March on Washington for Jobs and Freedom, where the Rev. Martin Luther King Jr. delivered his iconic "I Have a Dream Speech" Aug. 28, 1963. Approximately 250,000 people descended on the nation's capital from all over the country for the mass demonstration.

Through The Race Card Project's six-word stories, we'll meet some of the people who witnessed that history and hear their memories and reflections on race relations in America today.

This is the first in a two-part report about Clarence B. Jones and the March on Washington.

Ask Clarence B. Jones to identify himself, and he'll tick off a list of titles. "I live in Palo Alto, Calif., and I am a visiting professor at the University of San Francisco, and a scholar, writer-in-residence at Stanford University's Martin Luther King Jr. Institute."

Jones was also the first black man to make partner at a Wall Street investment bank, but he's leaving something else out, too. Jones, 81, was also the personal attorney and adviser to Martin Luther King Jr. during the height of the civil rights movement. Fifty years ago, on the eve of the March on Washington, Jones was working hard to make sure every detail went off without a hitch. Jones remembers it as "a stressful day."

For all the reminiscing over the years about King and his dream for a better America, the organizers of the march were not just stargazing about change. They had a long and highly specific set of demands. That 10-point list included "dignified jobs at decent wages," "desegregation of all school districts," and a ban on discrimination in "all housing supported by federal funds," among other things.

Other Coverage Of The March On Washington

The Genesis Of 'The Promissory Note'

Jones knew that King would need strong words and strong imagery to make that case. So he suggested language based on a recent experience in Birmingham, Ala. When hundreds of children were arrested after the Children's March in Birmingham in May — where dogs and fire hoses were unleashed on youngsters — civil rights organizers needed cash to make bail.

"I got a call — an urgent call — from Harry Belafonte, because we were getting enormous pressure from the parents of these kids to get them out of jail," Jones recalls.

The Rockefeller family wanted to help, so Jones had to fly to New York, go to a bank vault and sign a promissory note in exchange for $100,000 in cash.

That means, Jones explains, that "when the creditor calls you and say[s], 'Pay me,' you pay that person."

So when he was helping King draft talking points for his speech, Jones suggested that event would make a powerful analogy.

"You know, coming here to Washington ... is like we are coming to our nation's capitol and ask[ing] to be repaid, or ask[ing]to be paid in full, on a promissory note," Jones says. "Well, there has to be sufficient funds in the vaults of justice in this country."

Indeed, King used that image of a bounced check to assert that America had failed to live up to its promise. "It is obvious today that America has defaulted on this promissory note insofar as her citizens of color are concerned," King intoned from the steps of the Lincoln Memorial. "Instead of honoring this sacred obligation, America has given the Negro people a bad check; a check which has come back marked 'insufficient funds.' "

Jones has chronicled his work with King in his book, Behind the Dream, co-authored with Stuart Connelly. And while working on the memoir, Jones had some unlikely source material. 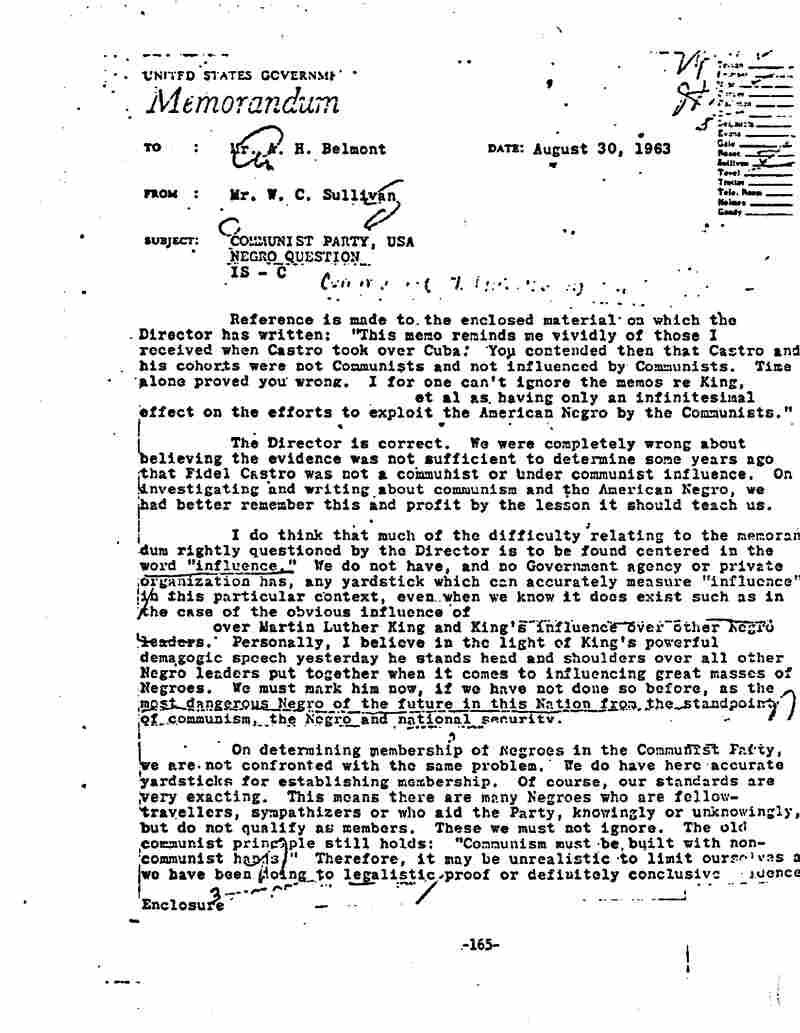 An FBI memo sent two days after the March on Washington identified Martin Luther King as "the most dangerous Negro of the future in this nation." Click here to read a page of the original memo, and here for a collection of FBI material on King. Emily Bogle/FBI hide caption

"Little did we know until years later, that every single conference call we had, every single telephone conversation related to the march and other matters, was wiretapped and the contents transcribed by the FBI. So while we would be having so-called confidential conference calls, there was another party that was also a part of everything we did," Jones says. "The contents were wire recorded, transcribed and written into a daily running transcript."

Subsequently, Jones says, he was reviewing an internal top-secret FBI memo, when he learned that the FBI considered King dangerous.

Under a memo titled "Negro Question," the FBI memo said this about King: "He stands head and shoulders above all other Negro leaders put together when it comes to influencing great masses of Negroes. We must mark him now, if we have not done so before, as the most dangerous Negro of the future in this Nation."

That memo was dated Aug. 30, 1963 — two days after the March on Washington. All these years later, Jones is actually grateful for those wiretaps. Thanks to the FBI, he has a vast — and accurate — archive of the time.

"If I have a fuzzy memory or hazy memory, I look at it, and there's a verbatim transcript of the conversations about a certain event, a certain person or a certain problem we were discussing," Jones says.

Jones always thought the government was listening. King, he says, didn't want to believe him.

"In his harshest moments, he would — not accuse me, but he would characterize me as being a 'left-wing McCarthyite.' That I was seeing FBI agents under the bed and all around, just like Joseph McCarthy saw Communists," Jones recalls. "It would come up because often we would have conference calls around 10:30, 11:00 at night, and that's after I had maybe two martinis and a shot of Jack Daniels. ...

"And Dr. King would say, 'Clarence, why don't you stop that? ... They have much better things to do than to listen to our conversation.' "

Of course, Jones had the last laugh — and even now, 50 years later, he laughs as he recounts the conversation. "I said, 'Oh really?' And I was proven right."

The audio of this story, as did a previous Web version, neglects to note that Stuart Connelly co-authored Behind the Dream.