Accessibility links
Jay Leno: 'Tonight' Was About 'Trying To Get Johnny To Laugh' In a 1996 interview with Fresh Air's Terry Gross, Leno recalled his rocky Tonight Show debut: "I got heckled my first show ... but luckily I had worked a lot of clubs so I could deal with it, and Johnny [Carson] seemed to like that." 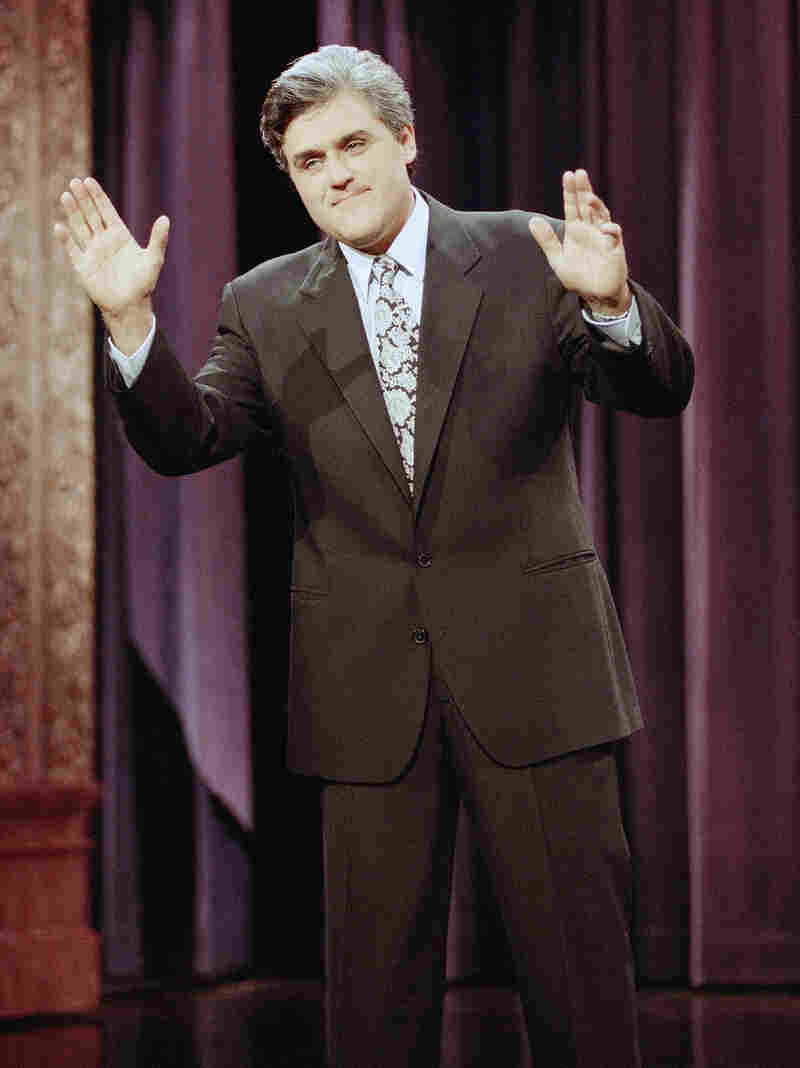 Jay Leno delivers the opening monologue during the inauguration of The Tonight Show with Jay Leno on May 25, 1992. Craig Fujii/AP hide caption 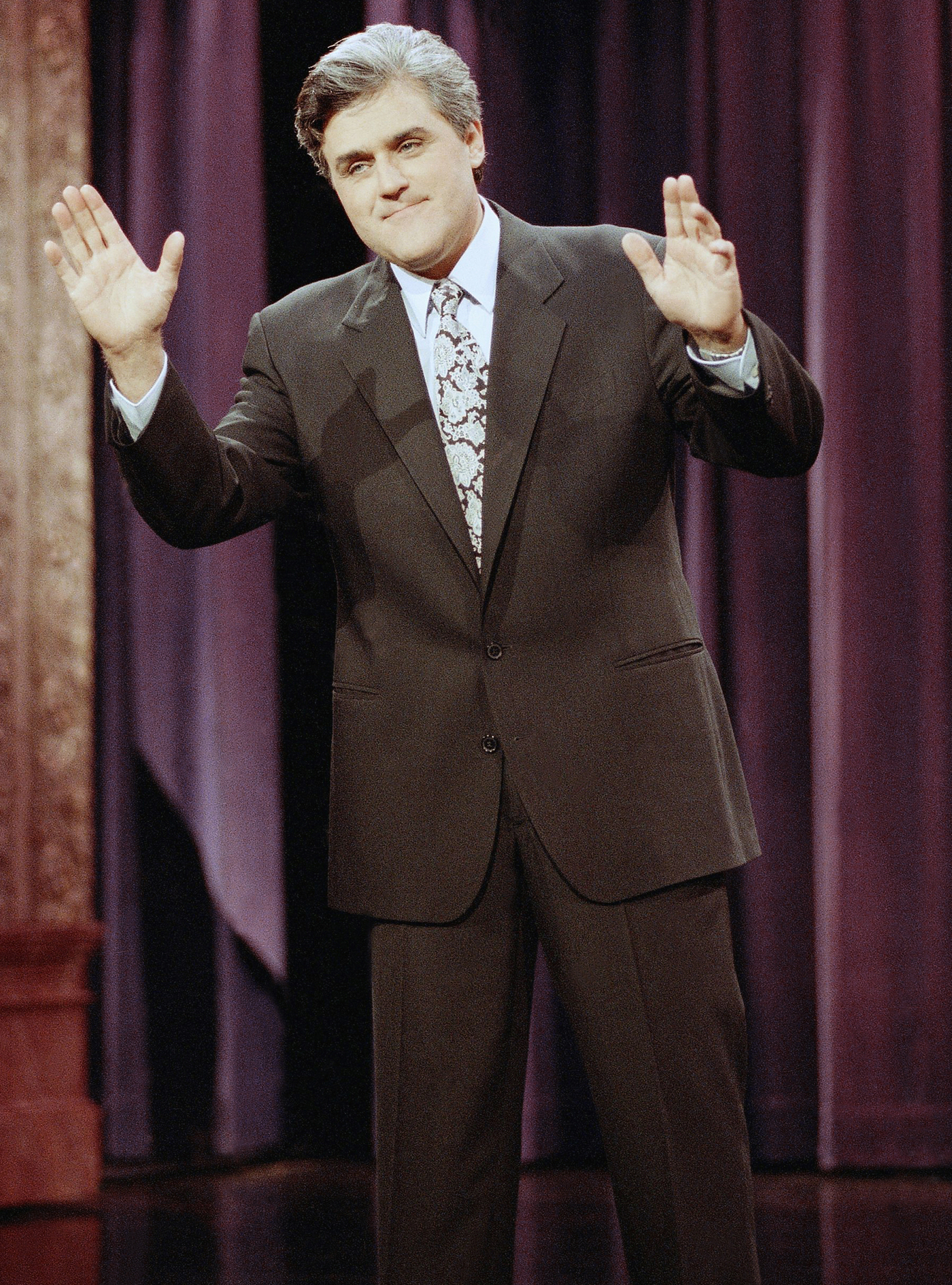 Jay Leno delivers the opening monologue during the inauguration of The Tonight Show with Jay Leno on May 25, 1992.

In 1992, when Jay Leno took over from Johnny Carson on The Tonight Show, he was already a familiar presence, having served as one of Carson's regular substitute hosts. Despite that experience, Leno's first few years on Tonight were rocky.

"When he started, when he was up against Letterman, Letterman beat him for the first couple of years," critic David Bianculli tells Fresh Air's Terry Gross. "But once Leno came ahead, he was unstoppable. He never lost that audience."

Leno had a long, successful run on Tonight, but in May 2009 he left to start his own prime-time program, The Jay Leno Show, also on NBC. That show was canceled after just a few months — and in a controversial move, Leno returned to Tonight, displacing new host Conan O'Brien.

In February 2014, Leno will step down for the second time as host of Tonight. Gross and Bianculli listen back to Leno's 1996 Fresh Air interview.

"When I would play strip clubs, they wouldn't laugh or applaud or do anything. It gave you the confidence just to stand on stage because the people weren't paying attention to me anyway.

"There's a story in [my] book about playing this club called The Mine Shaft, where — it was in Minnesota — people would pay $5 to get in, and then for another $5 the customers would get a miner's hat with a light on it. Now, there were no lights in the club, it was just a big empty building. And the women would come out and dance, and of course the guys would have lights on their heads and would look at whatever part of the woman they wanted to look at with the light, and I would just be standing in the darkness telling jokes. 'Hi everybody, howya doin'?' And occasionally somebody would look over at me, and I couldn't even look at them because they had the bright light on their heads — so if they looked at me, ow, it burned my eye. I had to look away. So most of the time, for the whole week, I was just standing in darkness while guys looked at these women with miner's hats on."

Here We Go Again: Leno, Fallon, And Why The Late-Night Wars Are So Boring

On the comedians who inspired him

"I remember seeing Robert Klein and George Carlin and David Brenner, [David] Steinberg. These guys would come out, and suddenly I noticed I was laughing more than my dad, because their humor was coming more from my point of view.

"Especially Robert Klein. He was a guy, I felt, like me: middle-class, normal parents, not crazy, not rich, not poor, just normal; watched the same TV shows as a kid that I watched; joked about the same kind of things that I watched. And that was a big change in comedy for me."

On how those comedians tapped into youth culture

"Suddenly here were guys on mainstream television talking about things only kids [identified with]. Now adults buy Rolling Stones albums, but back in the '70s there were adult records — you had Henry Mancini and Frank Sinatra and ... for the kids The Rolling Stones and The Beatles, whatever. And nobody ever did jokes about The Beatles on mainstream television. These were the first comedians to sort of parody younger people's lifestyles."

On his first appearance on The Tonight Show

"I got heckled my first show [with Johnny Carson,] which was a horrible experience, but luckily I had worked a lot of clubs so I could deal with it, and Johnny seemed to like that.

"But our producer ... Fred [de Cordova] was somewhat of a legendary figure, having directed Jack Benny and all these people. He would say, 'After you do your stand-up routine, if I go like this' — waving [his] hands toward me — 'that means go over and sit next to Johnny. If I put my hand up like this, stay on your mark. If I wave you away, go behind the curtain. But whatever you do, don't move until you get my signal.'

"I walk out, I do my routine. ... I look over at Fred, who is about to signal me, and his phone rings and now he's talking and I don't know what to do. ... I realize it was only maybe six, seven seconds, but of course to me [I] might as well have been out there an hour and a half, just hanging, waiting to get Fred's signal to come over and sit next to Johnny.