Accessibility links
Movie Review - 'Tokyo Waka' and 'Catcam' Critic Mark Jenkins reviews a quirky double-bill of animal documentaries. One pairs a visual poem about urban crows in Japan with a travelogue following the daily perambulations of a cat living with a German couple in an American suburb.

Dark Wings Over Tokyo, With A Dash Of Feline Mystery To Finish

Dark Wings Over Tokyo, With A Dash Of Feline Mystery To Finish 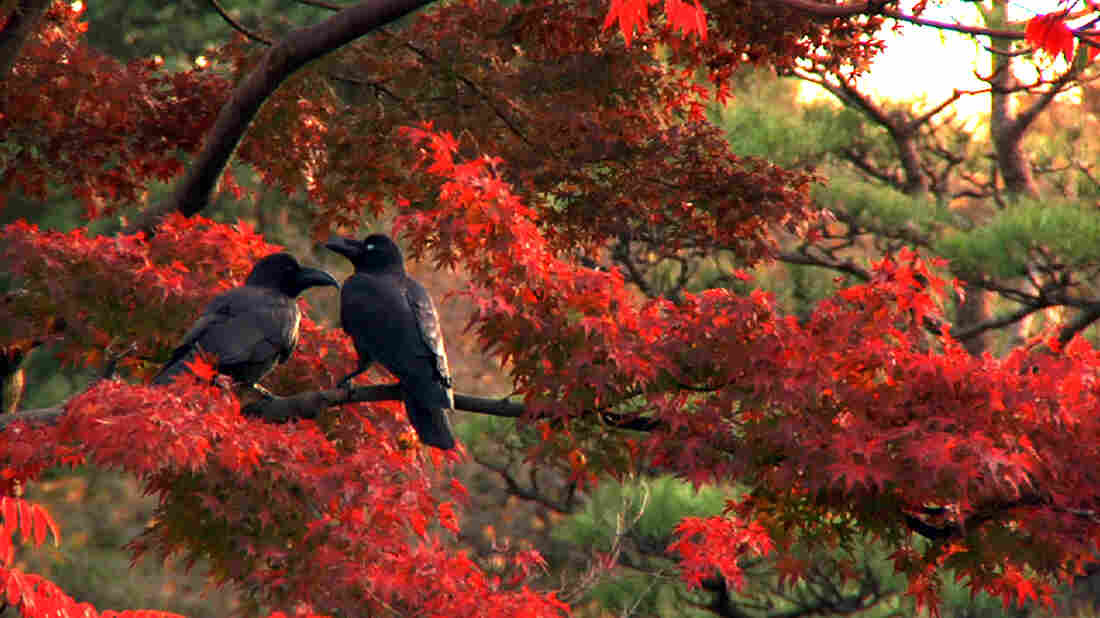 More than 20,000 crows, by recent estimates, live alongside the 13 million human inhabitants of Tokyo; Tokyo Waka tells their story — and meditates on the meaning of their persistence in one of the world's greatest cities. Stylo Films hide caption

Not rated; violence against animals

In Japanese with subtitles

Western movies usually film Tokyo through a lens clouded by preconceived notions. California documentarians John Haptas and Kristine Samuelson sidestep that pitfall by downplaying human views. Their Tokyo Waka: A City Poem looks at the Japanese megalopolis from the vantage point of its abundant crows.

Of course, it doesn't do exclusively that. The married filmmakers record the thoughts of scientists, artists, students, municipal bureaucrats and one articulate woman who lives unusually close to nature, at least for Tokyo — in a park's homeless encampment. But the movie often communes with the squawking black scavengers, or offers a bird's-eye view of the city below.

A waka is a traditional Japanese style of poetry, and this documentary does take a lyrical approach. Although barely an hour long, Tokyo Waka leaves room for offhand observations and humorous asides. (The one in which a local art collective creates a new breed of Pikachus is hilarious.) Sometimes, though, what seems like a random moment turns out to serve a larger theme.

According to the onscreen experts, crows have a natural affinity for Tokyo. The breed that flocks to the Japanese capital derives from Southeast Asia's rain forests and likes high perches, whether on buildings or trees. Like the city's human inhabitants, the animals are industrious, omnivorous and intelligent. One scientist displays bird brains in an array of jars: The crow's is twice the size of a duck's.

John Haptas and Kristine Samuelson's leisurely, lyrical film is "a poem about Tokyo" that uses the city's crows — and their inevitable associations with mortality — as a unifying theme.

To a Buddhist monk, crows inspire thoughts of life and death, and the detritus of human desire. A zookeeper notes that his charges have been tamed, and that Tokyo's true wild animals are its crows, rats and snakes. Artists, scientists and birdwatchers alike marvel at the critters' ingenuity: They use speeding cars to crack open walnuts and build multicolored nests with pop-art flair.

Crows feature in traditional Japanese literature, visual art and children's songs, as well as in notable recent work such as Masahisa Fukase's photographs. But they're also noisy, messy and ominously black — so the city government has made efforts to poison them, a process the movie documents. Even the exterminators, however, doubt that Tokyo will ever be without crows.

That park-dwelling woman, whose name is Masako, understands the dangers inherent in attempting to eliminate inconvenient life-forms. She notes that the homeless, just like the crows, are "something [people] don't want to see."

Much of the movie's charm comes from showing aspects of the city that Western visitors usually miss or from viewing oft-photographed sites from unexpected angles. Haptas and Samuelson also play close attention to sound, capturing urban bustle, nature sounds and the way they overlap. Sensually as well as philosophically, Tokyo Waka is attuned to the textures of everyday life.

Filling out the bill is Catcam, a 15-minute documentary that will be a treat for most feline admirers, even if it doesn't deliver on its premise.

A German couple, recently relocated to a rustic American suburb, was adopted by cat they named Mr. Lee. He left their house daily, though, and there were clues that he went to another home. So Juergen, a tinkerer by nature, invented a catcam. Two, actually: The first model took still pictures, and the second upgraded to video.

Neither Juergen's devices nor Seth Keal's movie ever establishes the full extent of Mr. Lee's human relationships. But the cat-collected images cause a sensation, crash an Internet server and win Mr. Lee a Dutch art-photo award. (The couple increased the winner's interest in the prize cup by filling it with shrimp.)

In point of fact a human, Charles Miller, shot most of the short film, but his work is rivaled by Mr. Lee's. Particularly striking are the still images; their unexpected angles and novel framing are what grabbed the attention of those Dutch aesthetes. Amusingly, the mystery of the cat's possible double life is upstaged by what you might, playfully, call the enigma of his artistic intention.