Accessibility links
The Inspiring Force Of 'We Shall Overcome' It is not a marching song. It is not necessarily defiant. It is a promise. 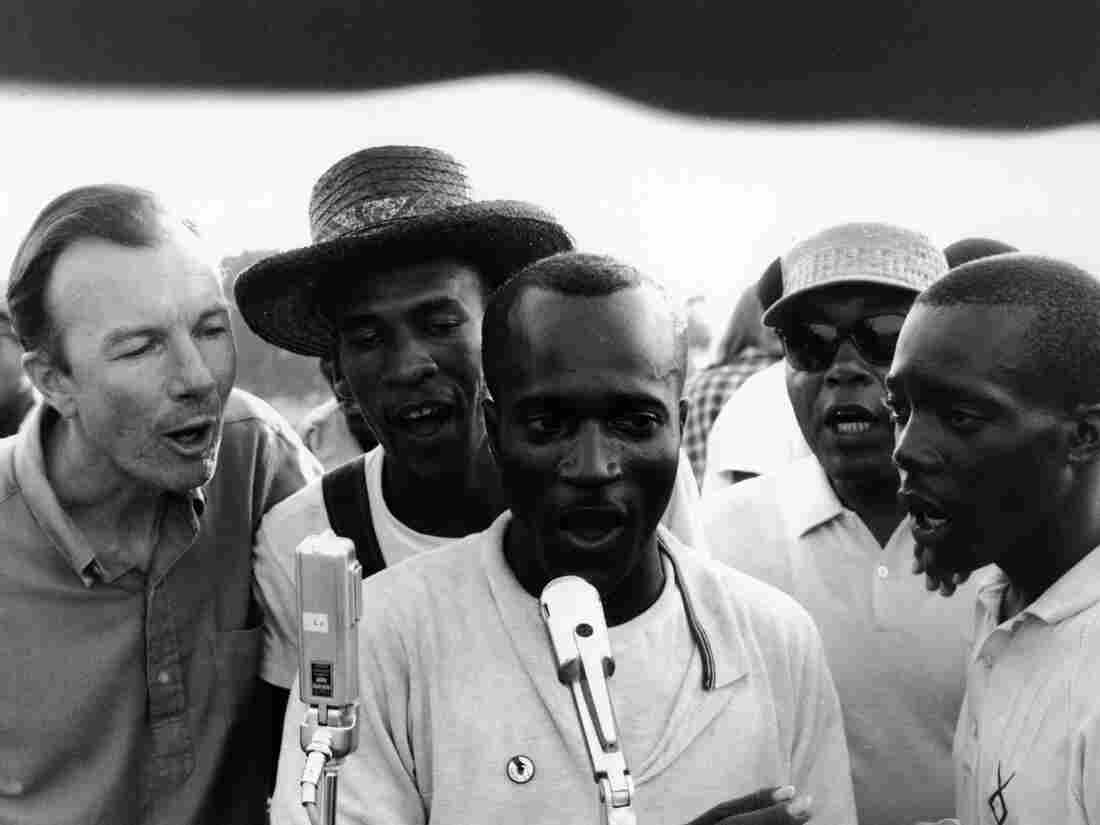 American folk singer and activist Pete Seeger (left) adopted and helped popularize "We Shall Overcome" by teaching the song at rallies and protests. Here he sings with activists in Greenwood, Miss., in 1963. Adger Cowans/Getty Images hide caption 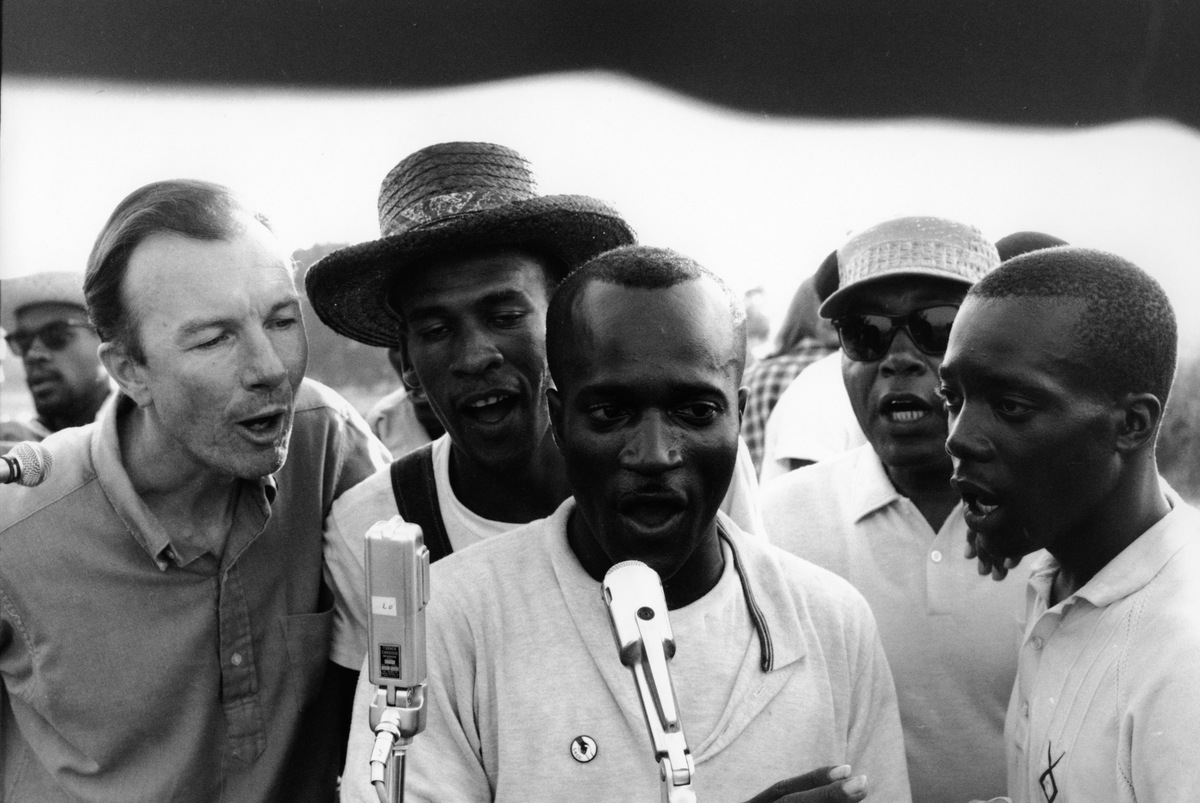 American folk singer and activist Pete Seeger (left) adopted and helped popularize "We Shall Overcome" by teaching the song at rallies and protests. Here he sings with activists in Greenwood, Miss., in 1963.

Title: We Shall Overcome

As the nation marks the 50th anniversary of the March on Washington, All Things Considered concludes its series about the moments that defined the historic summer of 1963. Back in 1999, Noah Adams explored the history and legacy of the song "We Shall Overcome" for the NPR 100. The audio link contains a condensed version of that piece.

Listen to the original 20-minute audio documentary as it aired in 1999, on what would have been Martin Luther King Jr.'s 70th birthday.

NPR's Noah Adams On 'We Shall Overcome'

It is not a marching song. It is not necessarily defiant. It is a promise: "We shall overcome someday. Deep in my heart, I do believe."

It has been a civil rights song for 50 years now, heard not just in the U.S. but in North Korea, in Beirut, in Tiananmen Square, in South Africa's Soweto Township. But "We Shall Overcome" began as a folk song, a work song. Slaves in the fields would sing, 'I'll be all right someday.' It became known in the churches. A Methodist minister, Charles Albert Tindley, published a version in 1901: "I'll Overcome Someday."

The first political use came in 1945 in Charleston, S.C. There was a strike against the American Tobacco Co. The workers wanted a raise; they were making 45 cents an hour. They marched and sang together on the picket line, "We will overcome, and we will win our rights someday."

In 1947, two of the union members from South Carolina traveled to the town of Monteagle, Tenn., for a workshop at the Highlander Folk Center. Blacks and whites had been meeting together about labor issues at the Highlander for many years. It was believed at Highlander that the people who have the problems are the ones who have the answers. It was important to talk together, and especially to sing. The tobacco workers brought their song to Tennessee, and Zilphia Horton, Highlander's music director, started using it in workshops in Tennessee and beyond.

The Mix: Songs Inspired By The Civil Rights Movement

On a tape from the late 1940s, Horton can be heard speaking with a group of farm workers in Montana. "This is the song of 'We Will Overcome' — it's a spiritual," she says. "I sang it with many different nationality groups. And it's so simple, and the idea's so sincere, that it doesn't matter that it comes from the tobacco workers. When I sing it to people, it becomes their song."

In 1947, Horton went to New York City, as she did every year, to raise money for Highlander. She sang the song there for Pete Seeger, who adopted it and added his own touches.

"I remember teaching it to a gang in Carnegie Hall that year, and the following year I put it in a little music magazine called People's Songs," Seeger adds. "Over the years, I remember singing it two different ways. I'm usually credited with changing ['Will'] to 'Shall,' but there was a black woman who taught at Highlander Center, a wonderful person named Septima Clark. And she always liked shall, too, I'm told."

In Southern California in the early 1950s, the song reached Guy Carawan. He was finishing graduate work in sociology at UCLA and doing some singing himself. He also learned about the Highlander Center in Tennessee, and that's where he ended up. Candi Carawan and her husband have been teaching together at Highlander for many years now. They met as the center's focus was shifting to civil rights, and "We Shall Overcome" was about to become an inspiring force.

"I first heard this song from a friend of mine, Frank Hamilton. He taught me this song, and he also had put some chords to it [on guitar]," Guy Carawan says. "When I came to Highlander in 1959, Zilphia Horton had died, and I had some singing and musical skills and they needed somebody there. So by the time I came to Highlander, I was playing it with the guitar like that."

Candi Carawan, too, remembers the first time she heard the song. A California transplant like Guy, she'd gotten involved with sit-ins in Nashville in 1960 and visited Highlander for a weekend event for students from various cities who'd been carrying on similar demonstrations.

"Guy was there trying to find out what songs we were using as part of our demonstrations — and mostly we didn't have a lot of songs," Candi says. "He taught us a number of songs that weekend, and one of them was 'We Shall Overcome.' And I can remember this electrifying feeling when we heard it, that that song just said exactly what we were doing and what we were feeling."

In the weeks that followed, Guy Carawan met other student leaders who were convening their own gatherings.

"And then at a certain point," he says, "the young singers, who knew a lot of a cappella styles, they said, 'Lay that guitar down, boy. We can do the song better.' And they put that sort of triplet [rhythm] to it and sang it a cappella with all those harmonies. [It became] a style that some very powerful young singers got behind and spread."

Johnson-Reagon was a preacher's daughter and knew the song as "I Will Overcome." She recalls the change to "We Shall Overcome" as a concession that helped bring whites and blacks closer in the civil rights struggle.

"The left, dominated by whites, believed that in order to express the group, you should say 'we,' " explains Johnson-Reagon. "In the black community, if you want to express the group, you have to say 'I,' because if you say 'we,' I have no idea who's gonna be there. Have you ever been in a meeting, people say, 'We're gonna bring some food tomorrow to feed the people.' And you sit there on the bench and say, 'Hmm. I have no idea.' It is when I say, 'I'm gonna bring cake,' and somebody else says, 'I'll bring chicken,' that you actually know you're gonna get a dinner. So there are many black traditional collective-expression songs where it's 'I,' because in order for you to get a group, you have to have I's."

Johnson-Reagon says she was still singing "I Will Overcome" when the civil rights organizers came to Albany. It was Cordell Reagon who persuaded her to make the switch to "we" — a lesson, she says, he'd picked up from Highlander.

"And, you know, we'd been singing the song all our lives, and here's this guy who just learned the song and he's telling us how to sing it," Johnson-Reagon says. "And you know what I said to myself? 'If you need it, you got it.' What that statement does for me is document the presence of black and white people in this country, fighting against injustice. And you have black people accepting that need because they were also accepting that support and that help."

A Song That Sustains Through Struggle

On March 15, 1965, President Lyndon Johnson appeared before Congress and 70 million Americans watching on television, calling for legislation that would ensure every citizen the right to vote.

"It is the effort of American Negroes to secure for themselves the full blessings of American life," Johnson declared in the speech. "Their cause must be our cause, too, because it's not just Negroes, but really, it's all of us who must overcome the crippling legacy of bigotry and injustice. And we shall overcome."

There may have been some in the civil rights movement who felt that President Johnson co-opted the phrase. But John Lewis watched the speech that night with Martin Luther King Jr. About the president, Lewis later wrote, "His were the words of a statesman and, more, they were the words of a poet," adding, "Dr. King must have agreed. He wiped away a tear at the point where Johnson said the words 'We shall overcome.' "

John Lewis is now a congressman from Georgia. In his book Walking with the Wind: A Memoir of the Movement, he tells of joining the civil rights cause as a teenager off the farm in Alabama. He became a leader. He was jailed; he was beaten. His skull was fractured in Selma on the day that was called Bloody Sunday. He says "We Shall Overcome" sustained him throughout the years of struggle — especially those moments when demonstrators who had been beaten, arrested or detained would stand and sing it together.

The song was carried by the civil rights movement throughout the South, a song that rose in air that was tinged with tear gas, that was a murmur of men and women at night in a Southern jail, and an affirmation sung by hundreds of thousands within sight of the Capitol dome.

And its power and promise turned up in the speeches and sermons of King — including one on March 31, 1968, just days before his death.