Accessibility links
Movie Review - 'The Getaway' - A Chase Flick That Starts At Silly And Goes From There A desperate former race car driver (Ethan Hawke) follows a stranger's enigmatic instructions in hopes of rescuing his kidnapped wife. A young computer hacker (Selena Gomez) is in the Mustang's passenger seat. Courtney Solomon (The Haunting) directed.

'Getaway.' No, Really. Get Away From Here. Off My Lawn!

'Getaway.' No, Really. Get Away From Here. Off My Lawn! 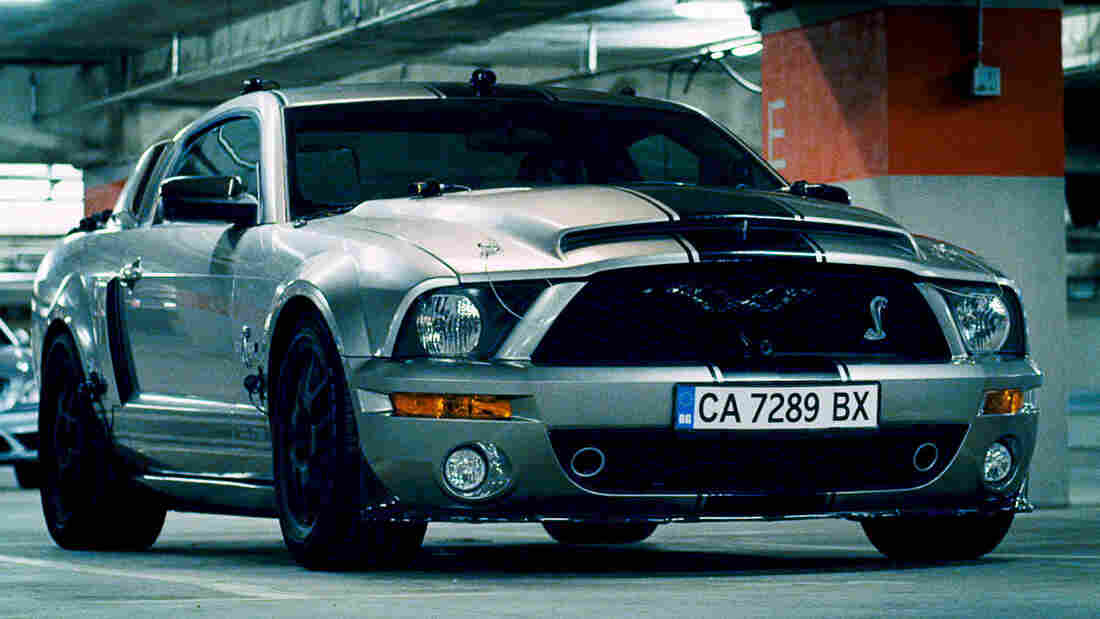 Getaway tracks a former race car driver whose wife has been kidnapped and ... Oh, who are we kidding? This movie is about a fast car. Warner Bros. Pictures hide caption 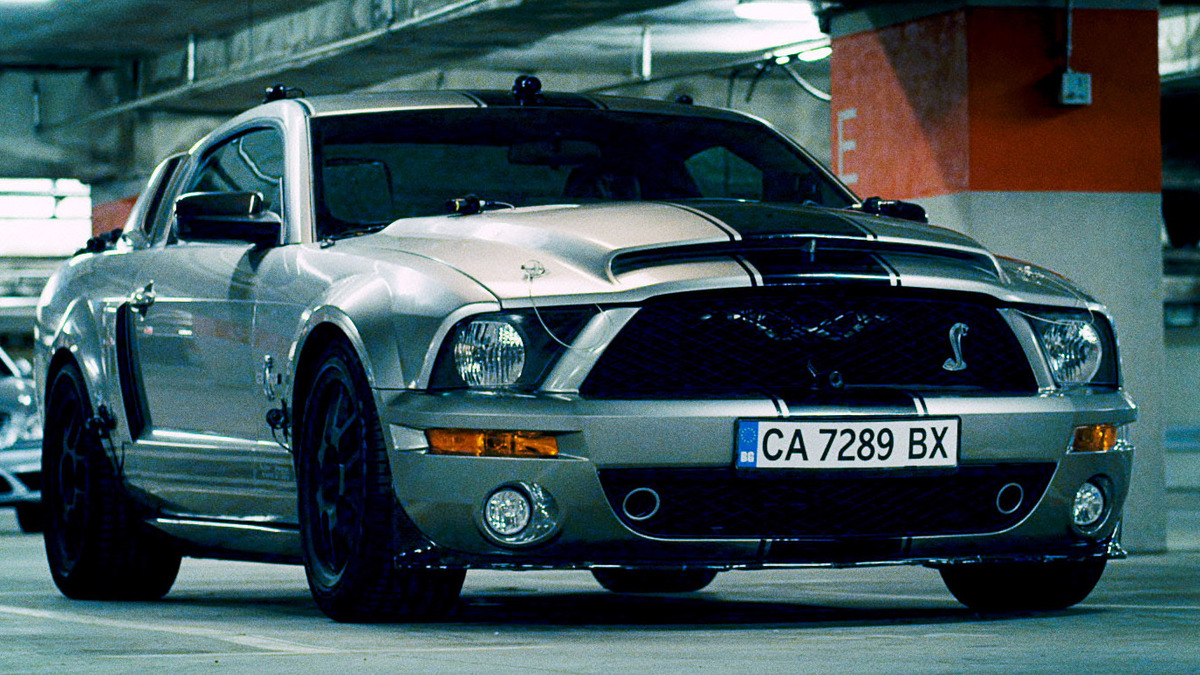 Getaway tracks a former race car driver whose wife has been kidnapped and ... Oh, who are we kidding? This movie is about a fast car.

Rated PG-13 for intense action, violence and mayhem throughout, some rude gestures, and language

Some movies can be ruined by thinking about them too much. Then there are the movies you ruin by thinking about them at all. The former can be fun exercises in effortless diversion. But when concerted effort is required not to ask any story-deflating questions about what's up on the screen, it kind of flattens the fun.

In Courtney Solomon's Getaway, a project less effective as a feature film than as a promotional reel for the Shelby Super Snake — basically an insanely tricked-out Ford Mustang — the nonsense piles up nearly as fast as the smashed, flipped, T-boned and otherwise trashed cop cars chasing after Ethan Hawke's laughably named Brent Magna and his sidekick, "The Kid."

(No, really. "The Kid.") (She is a teen hacker. Played by Selena Gomez. May we remind you that it's August?)

This is a movie for those who watched Liam Neeson in Taken and thought, "Hey, this is fun, but can we do it without having to wait 15 minutes for the action to start?" Solomon has 90 minutes at his disposal, and doesn't want to waste time with setup.

So he crosscuts flashback shots of Magna discovering his apartment ransacked and his wife gone with practically eroticized shots of the car he'll spend most of the next hour and a half in. (It's frankly shocking that Shelby doesn't already have the film's showroom shot of the car's fierce grille ornament running on a loop on their website.)

That engine starts revving and tires start burning within the first two minutes of the film, and they barely stop for the rest of it, as Magna is directed around the streets of Sofia (we are, for complicated reasons, in Bulgaria) by the German-accented voice of the man who has kidnapped his wife, and will kill her unless he helps ... do something. What, exactly, remains vague.

A movie like Getaway really only has one deceptively simple job: to punch viewers repeatedly in the adrenal gland for a little while and leave them feeling like they've been in the chase themselves. It's obvious Solomon knows his reference points: the Christmas setting, the German villain with motives obscured by a little bait and switch, the spouse in peril — they all scream Die Hard, while the near-constant fast-car action, the odd-couple bickering between male and female leads, the villain giving instructions from afar come from Speed. (Which itself was, of course, billed as Die Hard on a Bus.)

What Solomon fails to recognize in those films is their essential simplicity, and he unnecessarily complicates his film with too many ill-considered twists surrounding the shadowy motivations of that Teutonic voice. 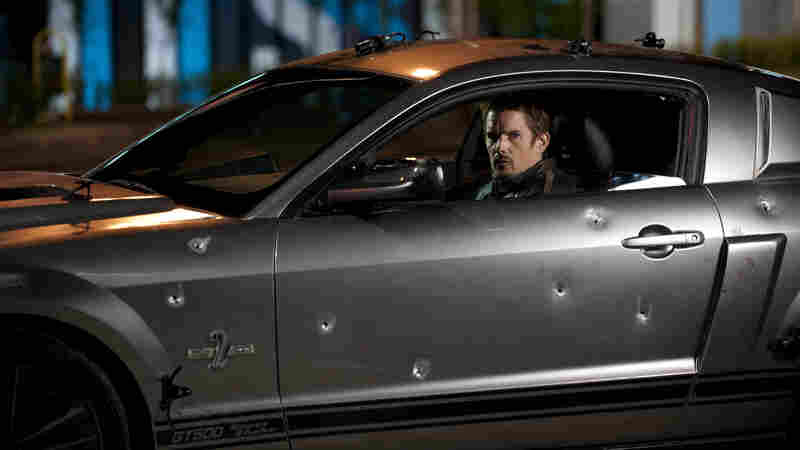 Ethan Hawke headlines the picture, along with Selena Gomez, but it's still pretty much a movie about a car. Which for some reason is largely bulletproof. Simon Versano/Warner Bros. Pictures hide caption 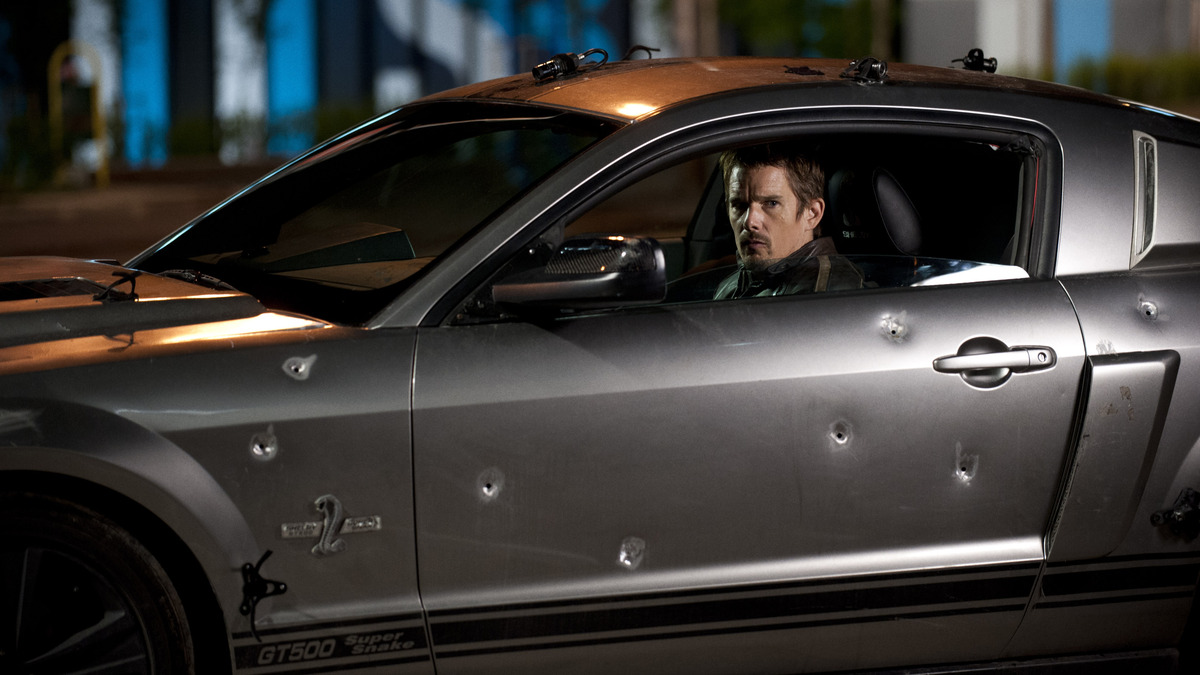 Ethan Hawke headlines the picture, along with Selena Gomez, but it's still pretty much a movie about a car. Which for some reason is largely bulletproof.

He also complicates things with the ridiculously implausible character he gives Gomez to play, a plot-hole panacea meant to lead the script out of whatever corner it has gotten itself into at any given time. She's a spoiled rich kid, a muscle-car gearhead, a supergenius hacker who can tap into any network in 30 seconds on an iPad, and a brilliant tactician to boot.

Turns out that car — which Magna is ordered to steal at the very start of the movie, the better to carry out The Voice's plan — belongs to her as well. Why a 20-year-old trust-fund brat needs not just a fast car but an armored, virtually indestructible fast car is a mystery solved only when you consider that it's required by the plot. That's just one of the questions you can't help but ask while watching the film, unless you can reduce your neurological functioning to brainstem only.

All that aside, Getaway might still eke out a pass if the car chases could earn one on their own. But the best hot-pursuit flicks thrive by speeding just on the edge of plausibility. The chases in The French Connection and Bullitt, say, work because the directors of those films thought about just how much disbelief we in the audience might be willing to suspend.

Solomon demonstrates no such consideration here; the chase sequences, despite the immediacy created by the onboard POV cameras used to film them, start with cartoonish as their baseline and grow more outlandish from there. At one point, after the success of a particularly ridiculous tactic, Hawke utters the movie's definitive line: "I can't believe that worked."

Yeah, we can't either.