Accessibility links
Area Man Realizes He's Been Reading Fake News For 25 Years The Onion, which turns 25 on Thursday, was founded by two Madison, Wis., college students as a local satirical newspaper "intended mainly to ... sell pizza coupons," says its editor-in-chief. But the self-proclaimed "America's Finest News Source" became much more than that. 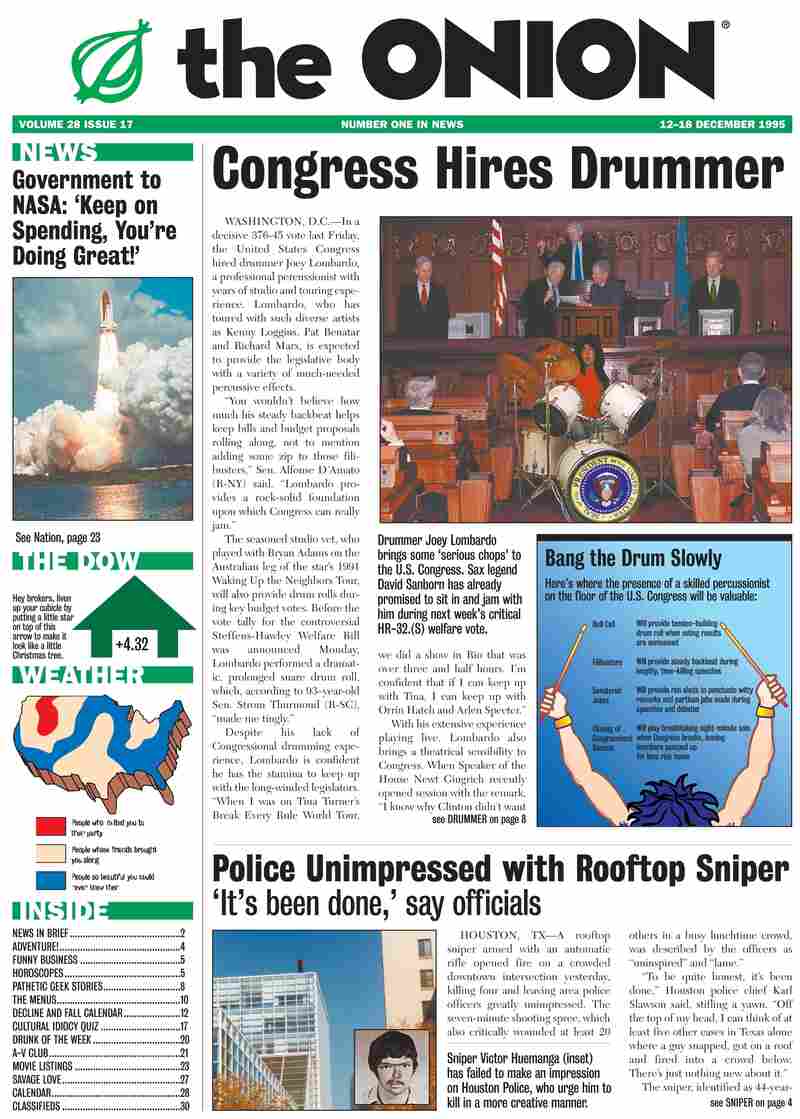 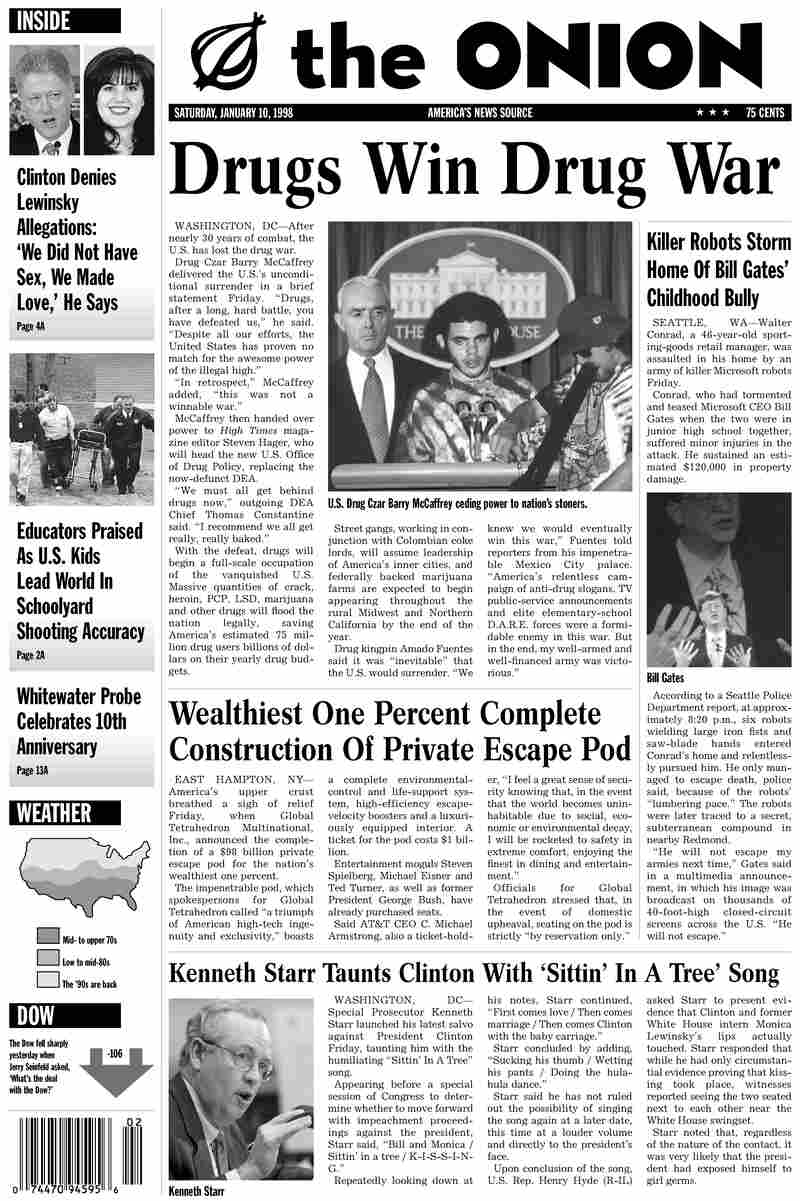 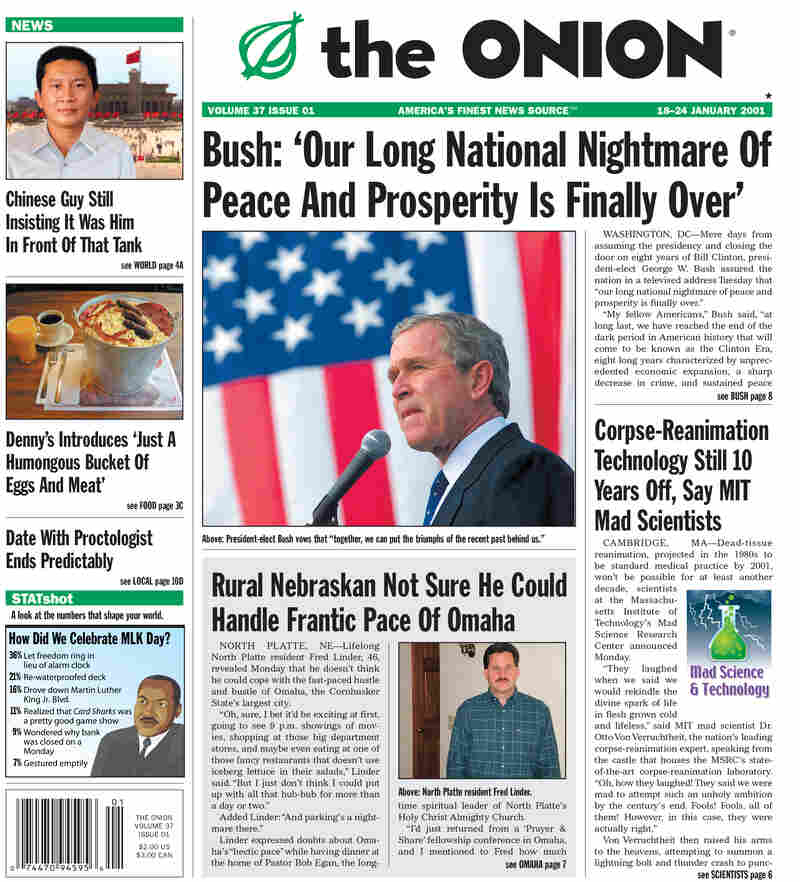 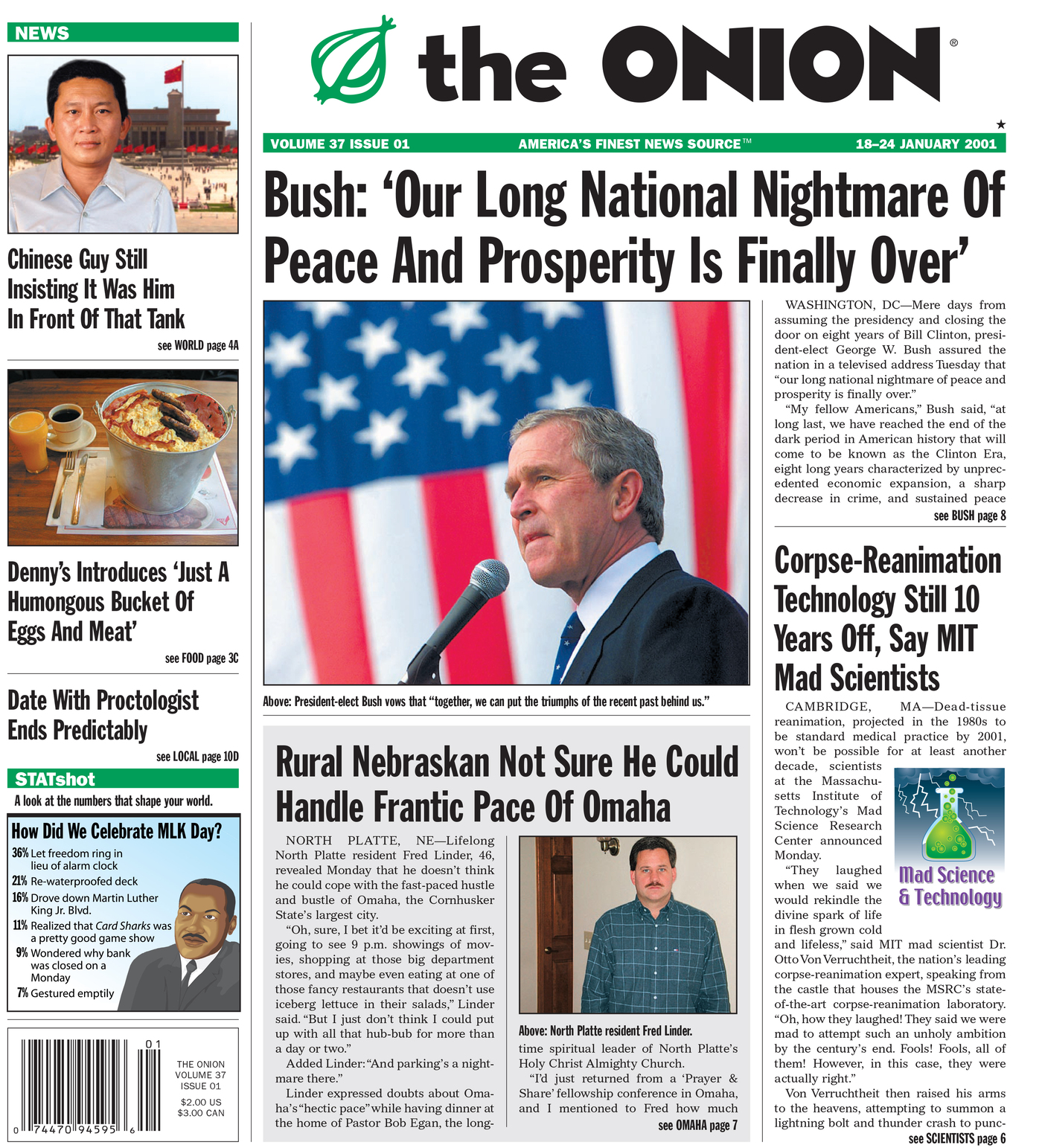 A Little Fun At NPR's Expense

Two college students founded the fake news organization, which began as a newspaper in Madison, Wis. "It really started as something very local that was intended mainly to ... sell pizza coupons," Editor-in-Chief Will Tracy tells Morning Edition host Renee Montagne..

It still has that Midwestern touch, he says.

"We still have a lot of Midwesterners writing for us, and I do think that there is a distinctly Midwestern aesthetic and voice to the paper," Tracy says. "It's sort of an unflashy, flat, unpretentious sort of voice that we have."

Part of that regional bent comes through in The Onion's daily-life humor and its stories about "Area Man" (who Tracy says seems to be a Midwesterner).

"I think that's one of the things that separates us from maybe other fake news outlets is most of what we do, actually, is focusing on the everyday minutiae, more so than what's happening in Washington," he says.

Stories like the one with the headline "Area Man Knows All The Shortcut Keys" is funny "because you know somebody like that," Tracy says, "and it's put in that sort of news voice which elevates it to a certain level of importance that it doesn't actually merit."

The Onion takes on subjects with serious weight, too, making political points. These can be painfully funny stories. Take this headline from 2009: "U.S. Continues Quagmire-Building Effort in Afghanistan."

"You're just replacing one word. You're giving people a headline that they have seen ... and you're just making that one-word switch. And that's kind of the beauty and the kind of simplicity of the formula," Tracy says.

No topics are off limits, either, no matter how uncomfortable they may make some readers. "War, genocide, rape, disease — just the worst things on earth — we have made jokes about all of them," he says.

On the business side, The Onion has been struggling along with real news organizations, but it's also made moves to adapt.

"As a company, we were smart in that we focused on digital," says Onion President Mike McAvoy. "We launched video in 2006 with The Onion News Network. And while print has taken a turn and that's no longer a profitable business for us, the rest of the company has thrived."

While the medium is changing, the stream of jokes continues. So will The Onion still be around, making readers laugh 25 years from now?

"There's always a slight looming terror of running out of jokes because we've done so many jokes, and we have this manic insistence on never repeating a joke that we've done," Tracy says.

"But then, we're able to remind ourselves that, oh no, there's still awful people doing awful things every day, so that'll give us more material in reality to draw from."