Accessibility links
Why Syria Is More Complicated Than Libya To start with, unlike Moammar Gadhafi's regime when the U.S. intervened in Libya in 2011, the Syrian government still has international allies. As the U.S. considers a strike on Syria, here's a look at some of the key differences between the two situations. 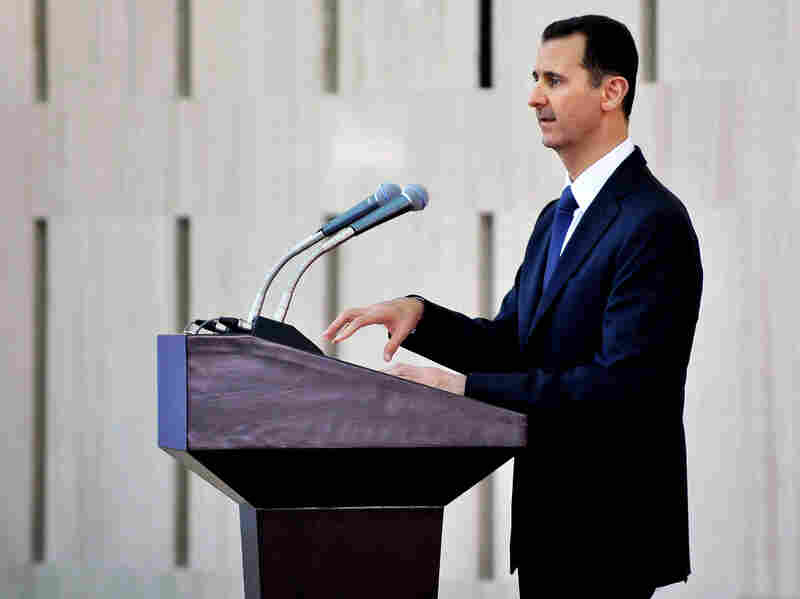 Syrian President Bashar Assad delivers a speech at an iftar dinner with political and religious figures in Damascus, Syria, on Aug. 4. In Syria, many different religious groups live in an often uneasy mix. While the country is primarily Sunni Arab, the government is run by minority Alawites like Assad — adherents of an offshoot of Shiite Islam. AP/SANA hide caption 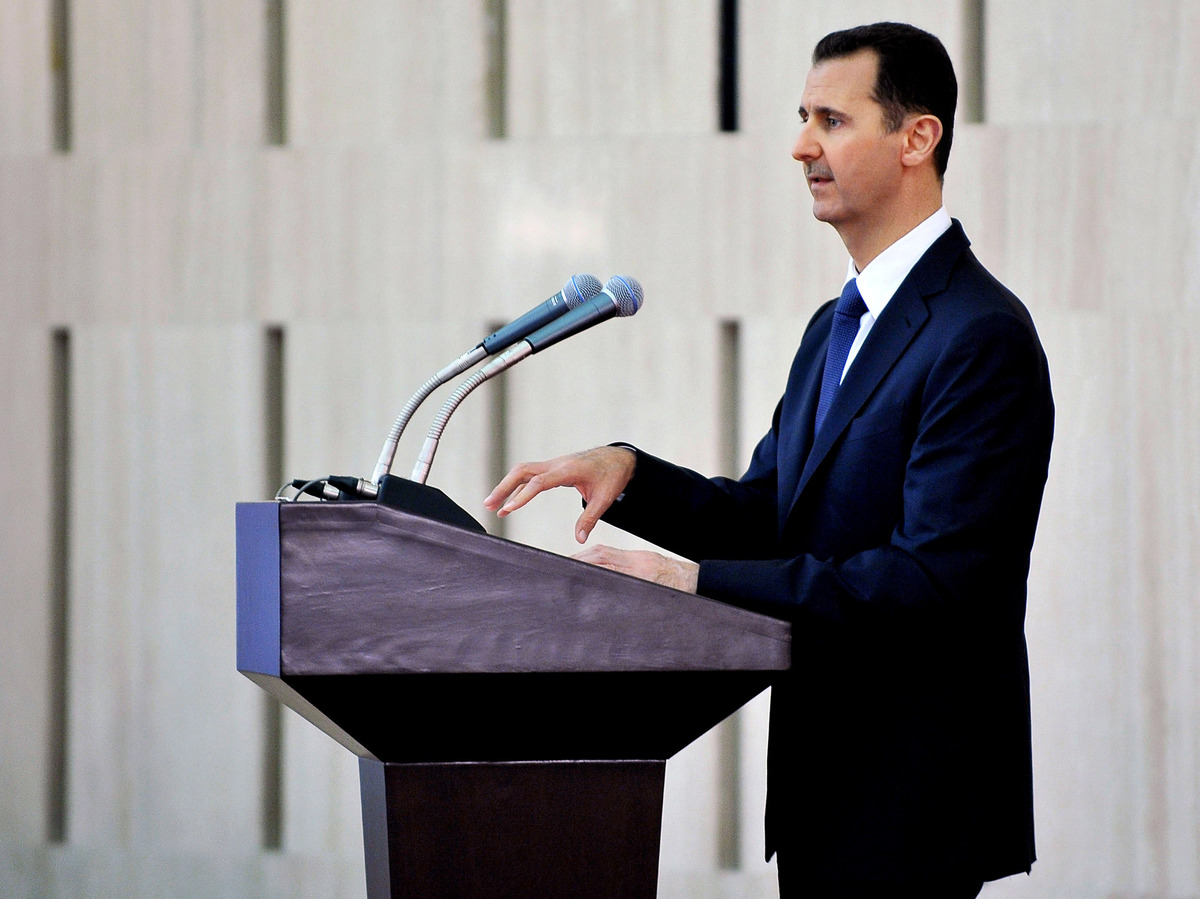 Syrian President Bashar Assad delivers a speech at an iftar dinner with political and religious figures in Damascus, Syria, on Aug. 4. In Syria, many different religious groups live in an often uneasy mix. While the country is primarily Sunni Arab, the government is run by minority Alawites like Assad — adherents of an offshoot of Shiite Islam.

The Arab spring has brought large-scale protests and violence to at least half a dozen countries in the past three years. Until now, the U.S. has only intervened militarily in one of them — Libya.

Now, as President Obama considers a strike on Syria, here's a look at some of the differences between the two scenarios:

When Obama first announced U.S. military action in Libya, he highlighted a few facts he felt sure of at the time: "In this effort, the United States is acting with a broad coalition that is committed to enforcing United Nations Security Council Resolution 1973, which calls for the protection of the Libyan people," the president said on March 19, 2011.

Russia and China did not block U.N. action on Libya. But that was then.

Two years ago, the Arab League supported the mission to take out Moammar Gadhafi. Today, the league does not support an attack on Bashar Assad.

"Nobody regionally and nobody internationally stood by Gadhafi and his regime," says Paul Salem, who directs the Carnegie Middle East Center in Beirut. "Obviously, Syria's very different. Syria has Iran, the Maliki government in Iraq, Russia, China and Hezbollah in support of it."

A chart showing who supports which side in Syria's civil war looks like a bowl of spaghetti.

Add to that the fears that any conflict with Syria will look like a proxy war — say, between Iran and the United States.

"Syria is very important from a perspective of geopolitics," says Amos Guiora at the University of Utah law school. "Syria presents for the Iranian navy the ability to dock in Syrian ports and to sail in the Mediterranean."

And don't forget that Israel — America's No. 1 Mideast ally — is in Syria's backyard. So from a global perspective, the situation in Syria is far more complicated than it was in Libya.

The people in Libya are almost all Sunni Arabs. But in Syria, many different religious groups live in an often uneasy mix.

To start with, says Mark Katz of George Mason University, the Syrian government is run by minority Alawites — adherents of an offshoot of Shiite Islam.

"But there are so many other communities. The country consists of a majority of Sunni Arabs, there are Kurds, there are Arab Christians, there are Druze," Katz says, "and these other minorities are also fearful that a change to Sunni majority rule will have a negative impact on them."

And the rebels themselves are far less cohesive in Syria than they were in Libya. Remember, the U.S. recognized one rebel government in Libya.

In Syria, it's not even clear how many groups there are. Some experts say dozens; others say almost a thousand.

One thing most experts do agree on: "The most powerful ones are Salafist and jihadist. Some are linked to al-Qaida," says Joshua Landis, who directs the Center for Middle East Studies at the University of Oklahoma.

"Libya's a country of 6 million people, and it can already pay its own bills," explains Landis. "Syria's a country of 24 million. Almost a third of them, 7 million, have been displaced — 2 million outside of the country; 5 million internally. And the economy is in shambles."

Libya can pay its own bills because it's the largest oil producer in Africa. Syria doesn't have nearly as much oil as its neighbors. That means reconstruction would be much more expensive.

Landis says Syria is "a destroyed country without any means of income today."

"The economy has collapsed by more than half and is in the process of collapsing even further," he says. "This winter is going to be a terrible winter in Syria. ... Only about half as many crops as were planted last year have been planted this summer due to insecurity, lack of fuel, lack of fertilizer and many other reasons."

In Libya, Obama and his allies sought to take out Gadhafi. In Syria, the president has described the U.S. goal as preventing the use of chemical weapons.

He spoke Wednesday night on PBS: "If we are saying in a clear and decisive but very limited way — we send a shot across the bow saying, 'Stop doing this,' that can have a positive impact on our national security over the long term."

In Libya, the U.S. ended its military involvement after seven months, when Gadhafi was killed. In Syria, it's still not clear what sort of military action the U.S. might take, or how long it could last.