Accessibility links
Rebecca Hall, Finding New Thrills In The Family Business The British-American actress co-stars opposite Eric Bana in the surveillance-state thriller Closed Circuit. She joins NPR's Robert Siegel to talk about playing a barrister, working with her celebrated Shakespearean father and being inspired by her opera-singer mom. 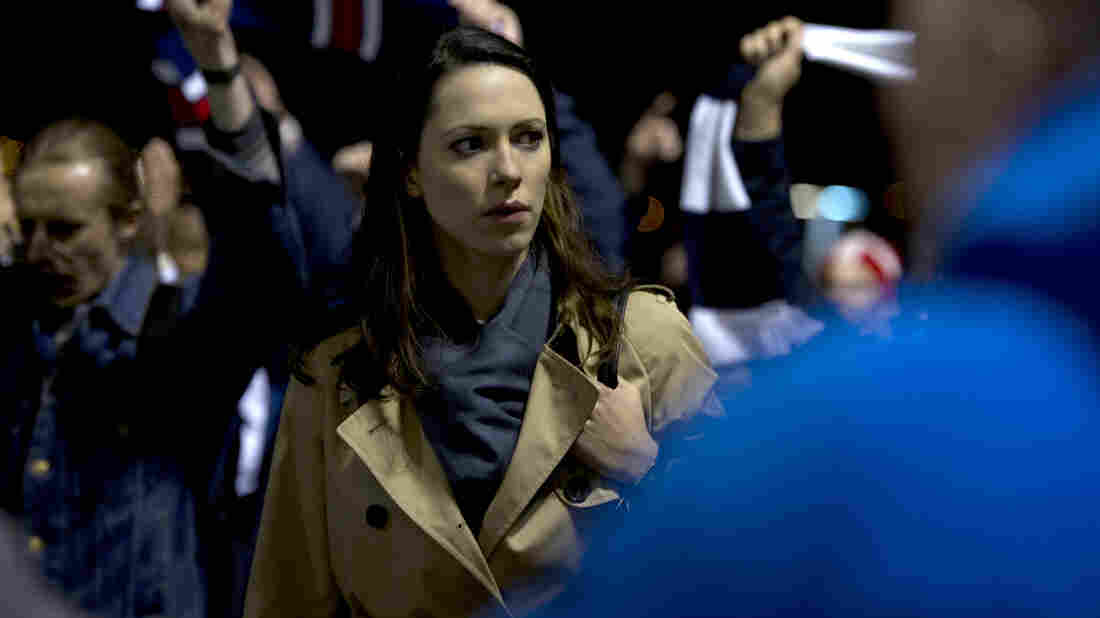 Chaos, panic and disorder: Rebecca Hall stars as a barrister whose assignment leads to all kinds of bad things in the security-state thriller Closed Circuit. Jay Maidment/Focus Features hide caption

Rebecca Hall, a veteran of films like Vicky Cristina Barcelona and The Town, is the star of the new surveillance-state thriller Closed Circuit, playing an English barrister charged with monitoring top-secret, closed-to-the-public evidence hearings involving a terrorist bombing.

One wrinkle — aside from the complete perfidy of nearly all institutions concerned, and the fact that this film's barristers and reporters are equally at risk of not reaching the end of the story alive — is that another barrister on the case, appointed to represent the defendant in his public trial, is her former lover. And they're barred by arcane British terrorism-trial procedure from communicating with each other — rules that might have been written by Shakespeare himself to set up more complicated possibilities.

"I think you'll find that these procedures have only come into play in light of recent events," Hall says slyly, when NPR's Robert Siegel jokingly poses the question. "Since they generally pertain to trials relating to national security, it's only a recent occurrence. Otherwise, I think we'd all have been up in arms a little bit earlier."

Hall joins All Things Considered to talk about researching her character, working with her father — a noted Shakespearean director — and learning from her mother, an equally celebrated opera singer.

On barristers as analytical, hyperverbal communicators

"Not wanting to make vast, sweeping generalizations, but I think on the whole they tend to be people who exist in their heads, and are very analytical. I didn't meet a single barrister or lawyer while I was researching the film that didn't speak in complete, full, very well-thought-out, precise sentences. And I thought that was fascinating, being generally a sort of bumbling, inarticulate mess myself.

"[It's] definitely interesting dramatically — when you're playing a character who has all of that facility in their professional life, and has no capacity to express their own emotions. So there's an irony there."

On her mother, the Michigan-born opera singer Maria Ewing

"She truly has always been and always will be an inspiration to me. Part of her skill as an artist is that not only did she — does she — have an extraordinary singing voice that sort of came from nowhere, with very little training, but she also was a very great actress. And I grew up watching her; I think she was performing one of her most well-known productions, Salome — which my father directed, actually — from when I was about 5 until I was about 14."

On seeing that famously controversial interpretation of Salome

"I don't think I was nearly sophisticated enough to realize it was unusual. I think you just sort of accept things when you're that age, don't you? I think I realized in hindsight that it was rather brave and brilliant of her — and as she argued at the time, far less vulgar — to wear nothing than to wear a little something."

On leaving Cambridge to work with her father, director Peter Hall

"Of course it was tough. That was sort of the point of doing it. It was one of those moments that I thought would define how I behaved for the rest of my life — if I could sort of buck a trajectory, and not be the sort of person who had this very linear journey of good grades at school, and then a degree from Cambridge to tell everyone that I was smart.

"There was some sort of rebellious instinct in me, to not have that, and to make a bold decision, so that I knew I could make bold decisions for the rest of my life. Not to have anything to fall back on, I think, was the logic."

On being dubbed an "indie girl" by the UK's Independent newspaper, and going mainstream

"It's conscious, and it's not conscious. There were opportunities for me to do more mainstream things earlier on, and I chose not to, 'cause they weren't things that I wanted to do. And then I suppose I got to the point of thinking ... I would like to have as diverse and varied a career as I'm allowed to have. You always have to bear in mind that it's not like I have my pick of every role out there; you are picking from what other people want you to do."

On working in a genre defined by fear and paranoia, and steering clear of over-the-top

"I think it's a sort of necessary hypothetical extreme, so that we can negotiate what the possibilities are — in their worst form — and have that discussion. You need [the willing suspension of disbelief]; that's part of any healthy art form that raises questions. And I think you have to go the extra mile to get that kind of reaction."

"I wouldn't entirely agree with you there. I think it's any responsible art form's duty to help us think about how we live. And if we were to not tackle these issues in narratives, in stories, we wouldn't necessarily see the dangers and the problems, and be able to think about them."