Accessibility links
Not My Job: Pianist Emanuel Ax Takes A Quiz On Axe Body Spray The classical pianist has won seven Grammy awards and recorded with the world's greatest orchestras. We've invited him to play a game called "You make men irresistible to women!" 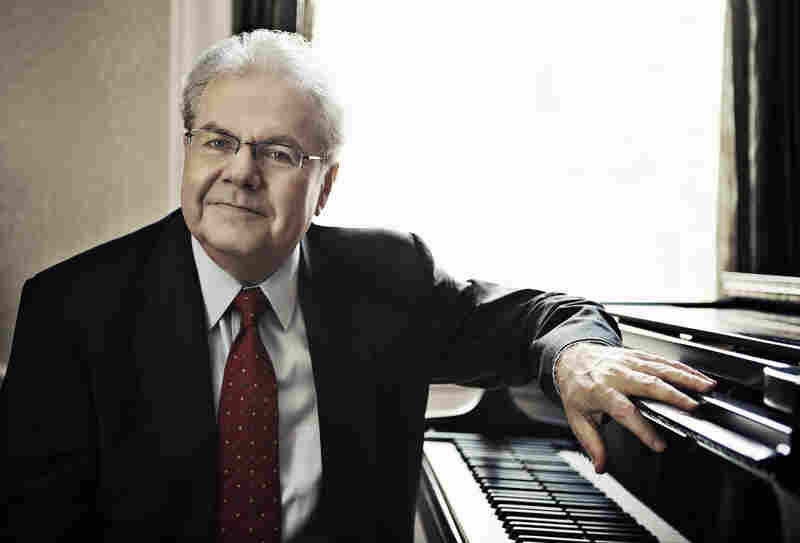 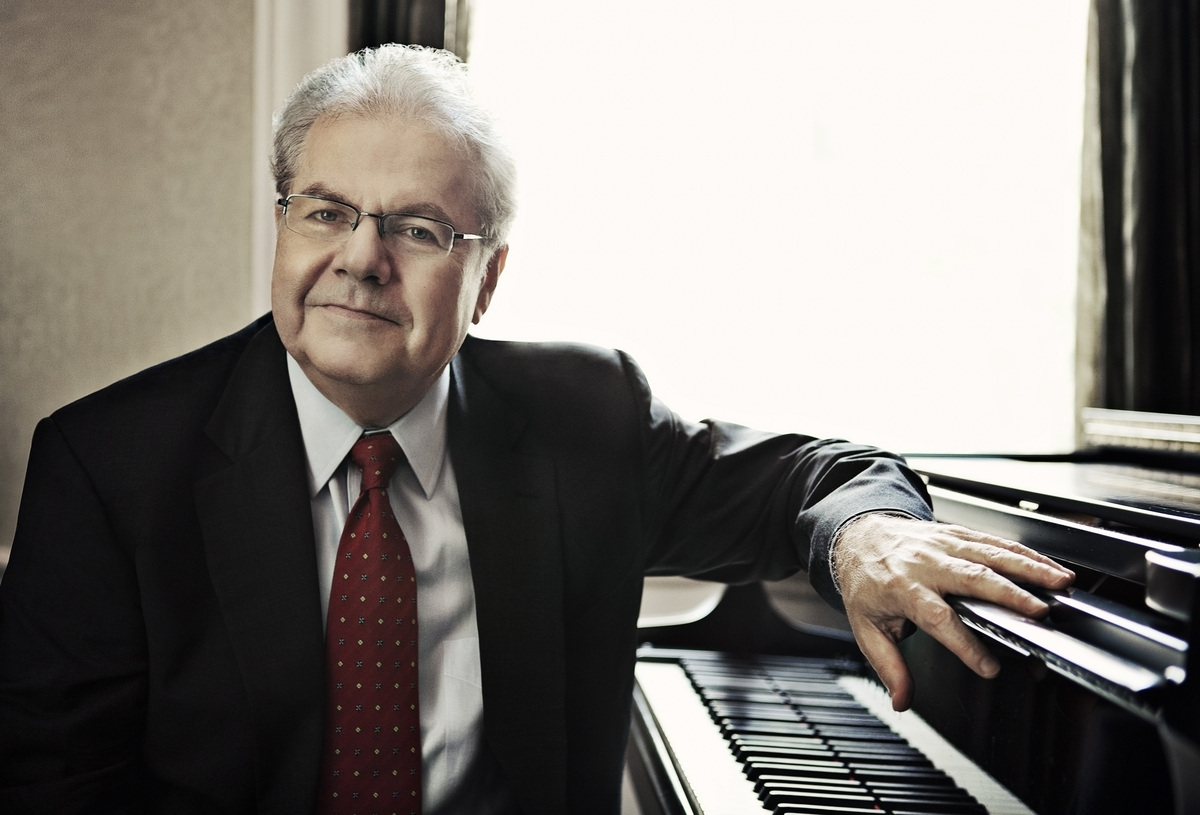 This week we're recording at Tanglewood — the outdoor music venue in the Berkshires of Western Massachusetts — and we thought it would be a good time to talk with classical pianist Emanuel Ax, who has won seven Grammy awards and recorded with the world's greatest orchestras.

And now the game where we ask a serious person silly questions. It's called Not My Job. So here we are at Tanglewood, a famed venue for classical music, and frankly we have no idea how to behave. So we figured we'd ask an expert. Emanuel Ax is a famed classical pianist who's played here so many times he just moved in nearby to save on the commute.

He's won seven Grammy Awards, he's recorded with the world's greatest orchestras, and we are delighted to have him with us here. Emanuel Ax, welcome to WAIT WAIT...DON'T TELL ME!

EMANUEL AX: Thank you so much.

SAGAL: Let's just go right to the important thing. Emanuel Ax is the coolest, most macho name in classical music.

AX: It is a little strange, I know.

AX: I have nothing to do with it.

SAGAL: Because, you know, we talked to - oh, we're going to go talk to Emanuel Ax, and they were like what is that, a metal band?

AX: There are a lot of jokes, obviously, out there.

SAGAL: Do you know any better ones than that because that was pretty lame?

AX: Well, they had - one of my favorites was I play quite often with my friend Yo-Yo Ma.

AX: And there's a wonderful German violinist, and people had the idea of putting together the Lizzie Borden Trio because her name is Anne-Sophie Mutter. So it would be Ax, Ma, Mutter Trio.

SAGAL: That may be the most public radio joke ever told.

SAGAL: Now we go with the comedy stylings with Emanuel Ax, thank you.

SAGAL: So let's - so let's do some history. You spent - you grew up in Poland, behind the Iron Curtain, as we used to call it.

SAGAL: And your family got out when you were about 10.

SAGAL: And what was the first thing you did when you got out to freedom?

AX: Well to be perfectly honest, the first great memory I have is we went Warsaw-Paris, Paris-Montreal, Montreal-Winnipeg.

SAGAL: Wait a minutes, so you're living in communist Poland, which I imagine a grey and dreary place, and then you go to Paris, and you're like freedom, the West, and then they make you go to Winnipeg.

AX: All we saw actually was the Paris airport, which at the time was Orly. But the thing I remember is my first plate ever of French fries.

AX: And that was very special.

AX: Yes, that was amazing.

SAGAL: You had never had French fries before? I hope you said what a country. So you ended up at Julliard as a young man, right?

SAGAL: Yeah eventually, and so you were one - were you one of those child prodigies?

AX: No, not at all, no. I was just a normal piano student.

SAGAL: Normal piano students tend not to end up at Julliard has been my experience.

AX: I mean, you know, but there were people around me always who were so incredibly brilliant and gifted that I always sort of felt middle of the road.

SAGAL: And one of them was Yo-Yo Ma, right? He was there.

AX: One of them was Yo-Yo, yeah. We met at school.

SAGAL: Really? How did you meet?

AX: We met at the Julliard cafeteria.

AX: We were both eating.

SAGAL: How unusual. Is it true you made your - you sort of made your first forays into the world of classical music through piano competitions?

AX: Well, competitions are one way to sort of get noticed and get some concerts.

SAGAL: Well, I know you keep hearing about, you know, people who win, say, the Van Clyburn or whatever it may be, and all of a sudden their career is launched, they have recording contracts or playing with orchestras. So I imagine they're very competitive.

SAGAL: That's they're called that.

SAGAL: I was an English major, I just wanted you to know that.

SAGAL: But anyway, go on.

AX: No, I will say, though, that there actually - I think competition in any kind of activity like music, art, literature, anything that's not done with a timer is actually impossible.

DICKINSON: But don't you also hope that the others do badly?

AX: As you say, it's competition. It's actually maybe not the best word. You could call it maybe, I don't know, the lottery festival or something, you know, something like that.

SAGAL: It would be more exciting if they made you fight. It wouldn't last very long. You'd just have a bunch of guys going not the hands, not the hands.

SAGAL: Because you just don't even want to get within striking distance of saying that one wrong.

SAGAL: Well, Emanuel Ax, you've been on this stage many times, but this time you're here to play a game we're calling...

SAGAL: Get two questions right, you'll win our prize for one of our listeners, Carl's voice on their voicemail. Carl, who is Emanuel Ax playing for?

KASELL: Emanuel is playing for Colette Dill of Springfield, Massachusetts.

SAGAL: Here we go. Are you ready to play?

SAGAL: At a meeting at the London ad agency that handled Axe in 2006, they came up with a killer idea. In their ads, a woman, very attractive, would smell a guy wearing Axe and then say what: A, goodness, I would like to mate with you this very moment; B, hey, did something sexy die in here?

AX: I would love it to be B. That would be marvelous. I'm going to go for B.

SAGAL: You're going to go for B, did something sexy die in here.

SAGAL: I wish it was, too, but it was actually bom chicka wow wow.

SAGAL: The idea is, a woman comes across a young man wearing Axe and immediately says bom chicka wah wah and starts gyrating. All right, all right, still have two more chances here.

SAGAL: Axe Body Spray is strong stuff. There can be consequences to its use as in which of these: A, at a Connecticut high school in 2012, so many teenage boys wore Axe Body Spray, it created a toxic cloud that triggered the fire alarm; B, in 2010, a woman who tried to use it as bug spray in a pinch discovered it actually makes mosquitoes stronger; or C, in certain cases it turns out it melts your skin off.

DICKINSON: And wait, Manny, boys do love to wear it. It's crazy. Like 14-year-old boys go crazy with the stuff.

AX: Yeah, but a toxic cloud?

AX: I think I'm being urged toward A.

SAGAL: I believe you are being urged toward A.

SAGAL: A. It's A. Congratulations, it's a toxic cloud.

AX: Thank you, thank you.

Last question, this is very exciting. Despite its reputation, Axe Body Spray has inspired acts of public service as in which of these: A, at a Dungeons & Dragons convention, a man in a bandolier filled with cans of Axe wandered around offering it to particularly stinky players; B, a public-minded citizen in Cleveland discovered it's the perfect chemical to remove graffiti from city landmarks; C, an anonymous philanthropist provides cans free of charge to the Arena Football League to use as smelling salts.

AX: That's tough. You know, they all sound plausible.

SAGAL: You're going to go for A. You're right.

SAGAL: Thank you. It was the D&D convention. I don't know how the guys felt when some guy walked up with a bandolier or Axe Body Spray and said here, try this, my friend. Carl, how did Emanuel Ax do on our quiz?

AX: Thank you so much.

SAGAL: Emanuel Ax is a multi-Grammy-winning pianist. Emanuel Ax, thank you so much for joining us on WAIT WAIT...DON'T TELL ME!