Accessibility links
With Modern Makeovers, America's Libraries Are Branching Out Library or Apple store? The Digital Commons at the Martin Luther King Jr. Memorial Library in Washington, D.C., has more screens than it does books. It's just one example of the many ways libraries are remodeling to meet the needs of 21st century users. 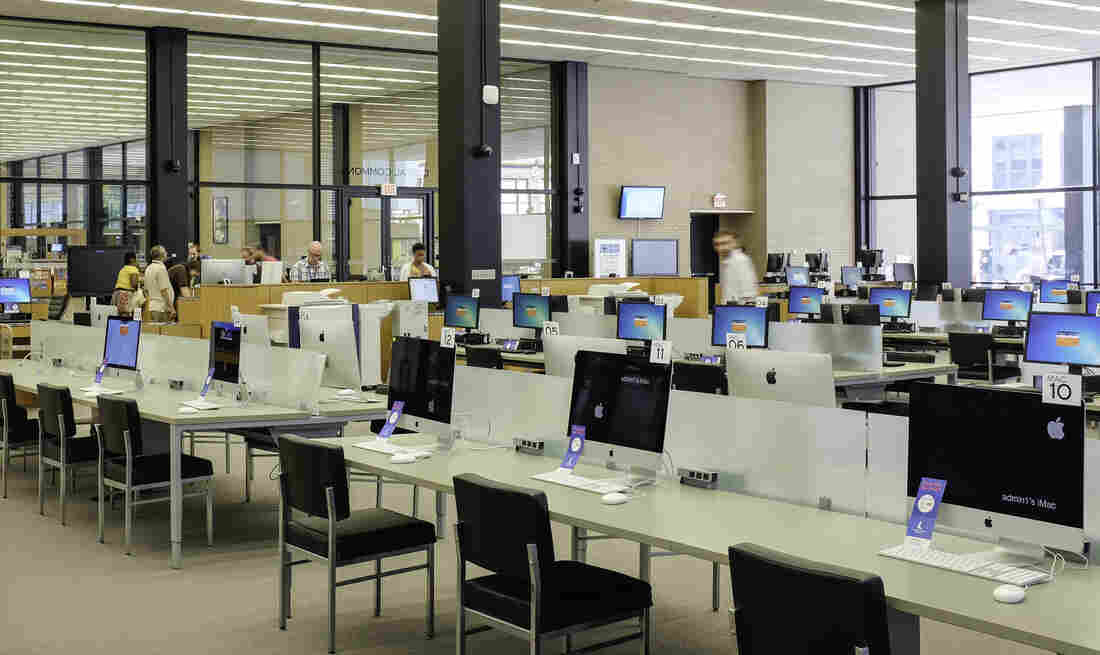 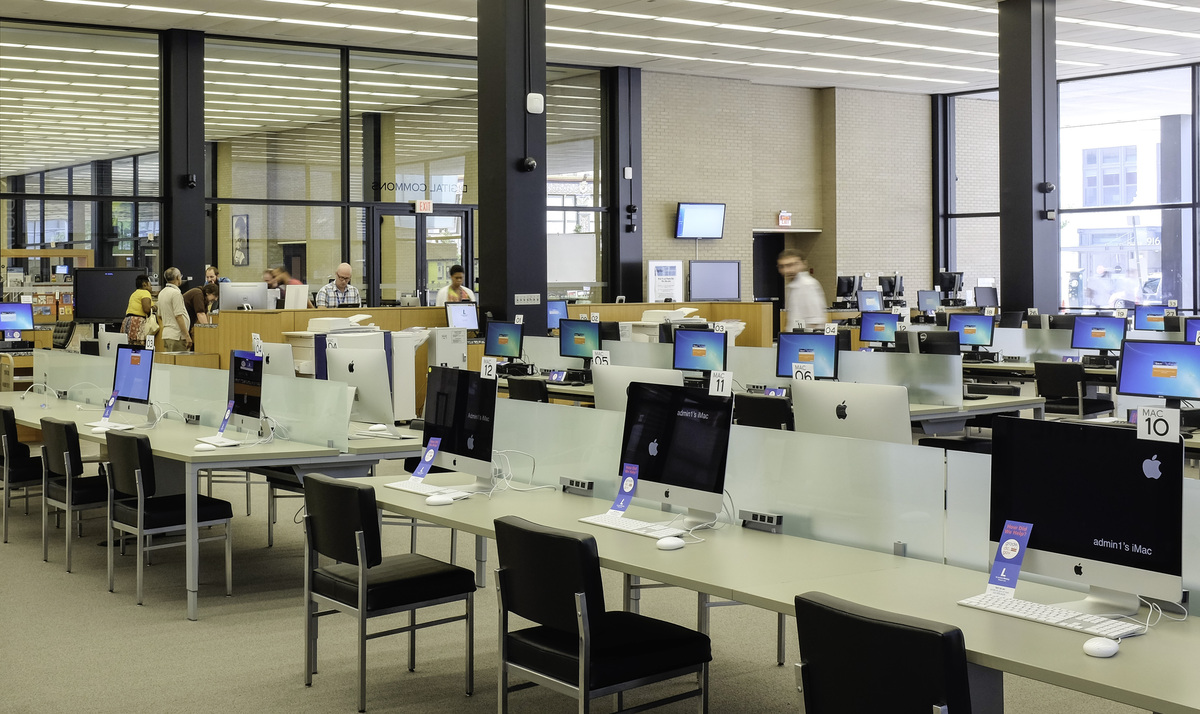 The Martin Luther King Jr. Memorial Library in Washington, D.C., has opened a Digital Commons that features rows of desktop computers, portable electronic devices and even a 3D printer.

It's not exactly a building boom, but several public libraries around the country are getting makeovers. The Central Library in Austin, Texas just broke ground on a new building that promises such new features as outdoor reading porches and a cafe. In Madison, Wis., they're about to open a newly remodeled library that has, among other improvements, more natural light and a new auditorium. Historic libraries in Boston and New York City are looking at significant renovations.

When you say the words "libraries" and "future" together, the first question a lot of people have is: Will there still be books? According to most librarians interviewed for this story, the answer is a firm "yes." But they also say that housing books will be less of a priority. Take the Martin Luther King Jr. Memorial Library in Washington, D.C., which is in the midst of a $100 million remodeling. On the main floor, there used to be thousands of books and periodicals in the "Science, Business and Technology" section. Today, it's called the "Digital Commons," and there's hardly a scrap of paper to be found.

Looking very much like an Apple store, there's a digital bar displaying the latest portable electronic devices (nooks, slates, tablets, minis, etc.) There are rows and rows of desktop computers. There are "creative stations" that have pricey software like the Adobe CS6. "People who can't afford that software now have an opportunity to do so," says Nicholas Kerelchuk, manager of the Digital Commons. 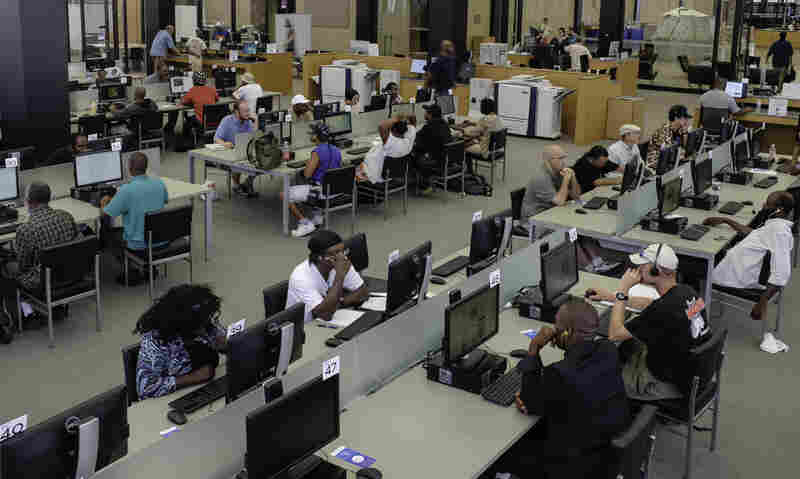 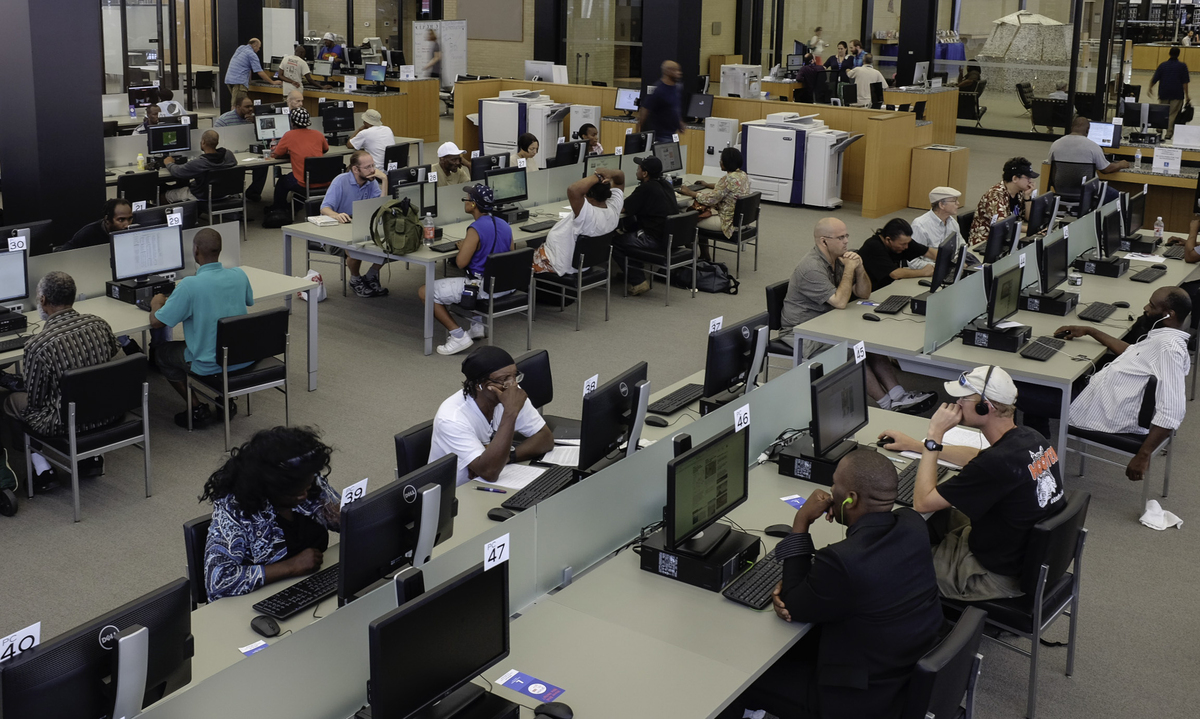 Users take advantage of the technology made available to them at the Martin Luther King Jr. Memorial Library.

Even on that rare event in Washington, D.C. — a beautiful Saturday morning in August — every seat inside the Digital Commons was taken. There were people waiting to attend a demonstration of what Kerelchuk calls the library's "rock star": A 3D printer that's about the size of a movie theater popcorn popper. The machine will create just about any kind of object you design, from a miniature bust of President George Washington to a cookie cutter shaped like a dinosaur.

Carolyn Hatton — a veterinarian who attended the demonstration — says she was there because the 3D printer could revolutionize the medical field. It's already being used to create artificial body parts. "I think it's got enormous purposes for it that we haven't even imagined," says Hatton.

The MLK Jr. Library has also created a "Dream Lab." The large space is pretty nondescript but, with all of the technology at your fingertips, the training they offer, the self-publishing opportunities, Kerelchuk is confident they will turn the library into a place where content is not just consumed but created. "We're giving the opportunity to entrepreneurs and tech start-ups and non-profits to come in and really start scaling their venture, their idea. So we're really changing the idea of what a library is capable of and what we have to offer," he says. Plus, it's all free with a library card.

So why might this idea of an extremely well-equipped, maker space be the library of the future? Ginnie Cooper, D.C.'s chief librarian, believes it's a smart expansion of something libraries have done for years.

"Everything in libraries that we talk about as new today has its roots at some other time," says Cooper. "For example, I know writers who wrote their books at the library. I know people who started their business at the library. And what we realized was, if we were going to serve today's people building economic value in their communities and being creative, we had to think about the world differently," she says.

And since librarians around the country are doing this "thinking," chances are their vision for the future is well-informed.