Accessibility links
Trucker Shortage Worsens As Energy Sector Booms With the oil and gas sectors booming, the need for truckers is growing. But the ranks of well-trained drivers are shrinking, especially as baby boomers hit retirement age. And competition for drivers has become fierce, with the annual turnover rate nearing 100 percent. 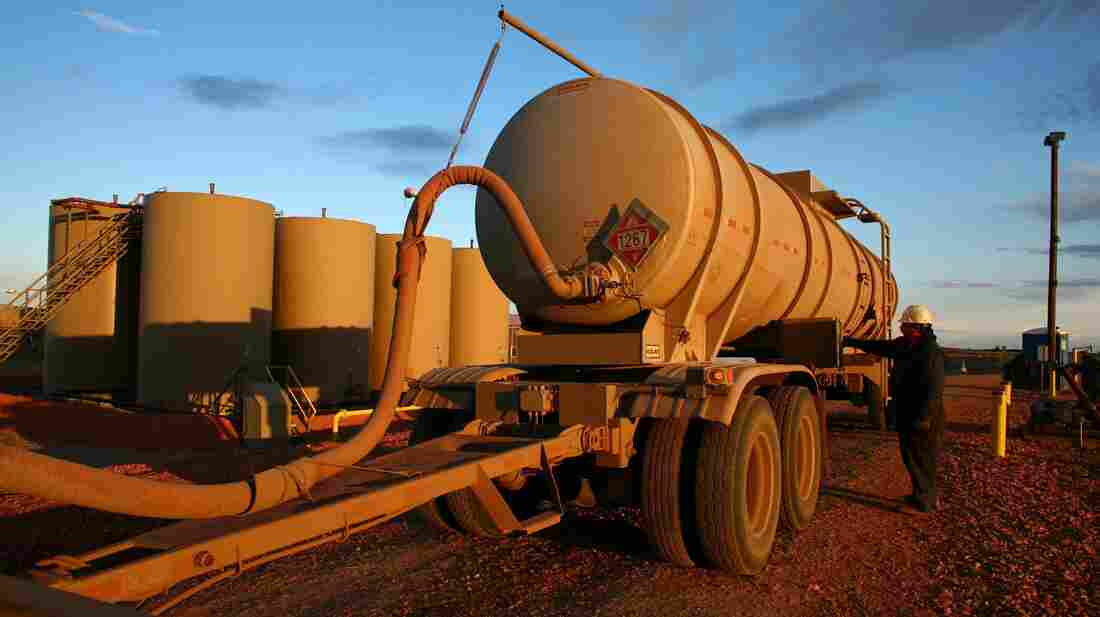 Keith Ceynar transfers oil from his truck into a tank at a facility outside Alexander, N.D. An increasing amount of oil is being delivered by trucks. Matthew Staver/Landov hide caption 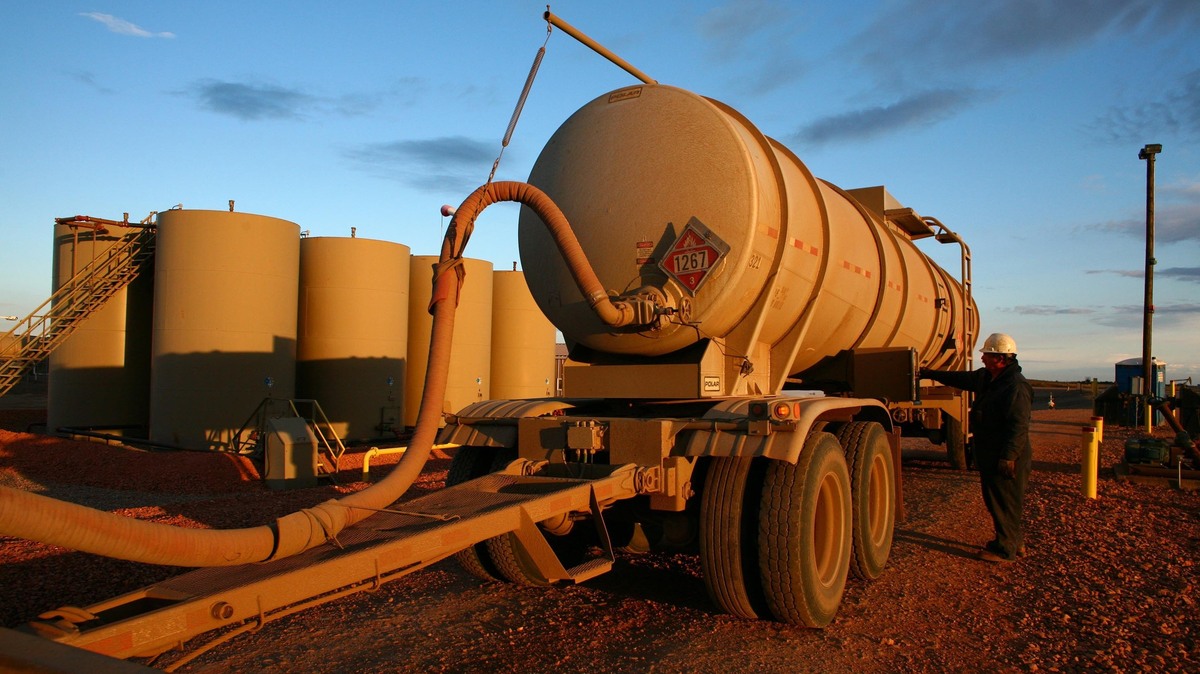 Keith Ceynar transfers oil from his truck into a tank at a facility outside Alexander, N.D. An increasing amount of oil is being delivered by trucks.

When goods arrive in Houston, they may come in containers stacked high on huge ships or strung out on long lines of rail cars. But to get to the customer, those goods need to be put on trucks and driven to their final destinations.

And now with the oil and gas sectors booming, the demand for truckers is soaring. The U.S. Energy Information Administration says oil delivered to refineries by trucks shot up 38 percent between 2011 and 2012.

But while the need for truckers is growing, the ranks of well-trained drivers are shrinking as baby boomers hit retirement age.

"The driver pool is aging, and there are not enough young drivers coming out of truck-driving school to replace those drivers, at the same time that the demand for freight is increasing," said Brian Fielkow, president of Jetco Delivery, a Houston-based trucking company.

The American Trucking Association says about 3 million truckers are on the nation's roads today, but companies need about 30,000 more. And that shortage may balloon in coming years as the boomer-retirement wave slams into the energy-sector surge.

The trade association's latest figures show competition for drivers has become ferocious, causing truckers to flip from one employer to another. The most recent report shows the annual turnover rate among truckers is 97 percent.

With competition intense, earnings have been improving for truckers. James Stone, who has spent the past decade servicing firefighting equipment, wants to get into the field. He is studying for his commercial truck driver's license at San Jacinto College in Pasadena, Texas.

There's Not Enough Work For Veterinarians

Stone's goal is to earn a hazardous materials permit from the U.S. Department of Transportation. That would allow him to drive tankers, transporting crude oil and chemicals — making him just the sort of driver of which the industry is desperately short.

But employers say not everyone who wants to be a trucker can pass the background checks. Drug use and spotty driving records wash out a lot of applicants.

Among those who do have clean records, many are reluctant to become truckers because of the long stretches away from home. Stone says he first looked into becoming a truck driver about 20 years ago. But his plans took a different turn when he had to care for ailing family members.

"Depending on which company you work for and what division you're in with them, you could be gone two weeks at a time, three weeks at a time, six weeks at a time," he said. "You've got to make sure things are right at home where you don't put a strain on the family life."

Earning top dollar also requires driving long hours into the night, which can take a toll on truckers' health. The Transportation Department estimates driver fatigue leads to more than 1,000 crashes every year.

To reduce accidents, the department enacted new hours-of-service regulations that took effect on July 1. The limits on driving time may be better for the driver's health, but not necessarily for his wallet.

Lorie Qualls, manager of Lone Star College's Transportation Institute, said regulations can have a big impact on drivers, in terms of both pay and time away from home.

"Basically, what's happening is instead of having the ability to drive 82 hours in a seven-day period, they're losing 15 percent, and going to 70 hours in seven days," she said.

Once they hit 70 hours, truckers have to take a 34-hour break — including two overnight periods. If the driver times it wrong, that reset could add as much as two full days to the cross-country journey.