Accessibility links
The Latest In Scientific Field Equipment? Fido's Nose Conservationists around the world are using a new kind of field equipment. It can navigate difficult terrain, detect tiny chemical samples, and ... wag its tail. Detection dogs are teaming up with humans to study rare, endangered and invasive organisms.

Dave Vesely is busy training his dog, Sharpy. She isn't learning to sit or fetch or even herd sheep; Sharpy is learning to find the nests of western pond turtles.

These turtles are sneaky. After laying their eggs in a small hole, they knead together dirt, leaves and their own urine to plug the opening. Once this mud dries, the nest looks like an unremarkable patch of ground.

But that kind of stealth can't protect the turtles from urban development. The western pond turtle is disappearing from the Pacific Northwest as its native habitat is claimed by humans.

Vesely, who works at the Oregon Wildlife Institute, hopes to give the turtles a fighting chance. To keep foxes and raccoons away from their tasty eggs, he can place small metal cages over the nests. But first, he has to find them.

"It's almost impossible," Vesely says. "After just hours and hours of walking across fields looking for nests, it just occurred to me — I've got a dog at home that could probably do this better than I can."

Vesely and his wife own five Groenendaels — big, furry Belgian sheepdogs, jet black from nose to tail. Millions of years of evolution have shaped these dogs into excellent predators, with eyes that pick up movement in dim light, sensitive ears and an incredibly powerful nose.

Vesely is trying to leverage those predatory powers to save a species other canids eat. He's taught Sharpy to associate the smell of turtles with playtime, and now he's running her through training courses, where several turtle-scented objects have been hidden in a grassy field.

Sharpy weaves back and forth, her tail wagging, searching for a scent plume. When she gets that first whiff of turtle, her body whips around, and she follows the smell to its source. Then she plops down and looks to Vesely for her reward — a couple minutes of tug-of-war.

"Nice find for a beginner dog," Vesely tells her.

Dogs can detect the smell of diseased bees, ovulating cows, pirated DVDs and cancer. It's all thanks to their top-notch sensory equipment.

"The dog just has hundreds of millions' more receptors lining the pathways of [its] nose than we do," says Alexandra Horowitz, a dog cognition expert at Barnard College.

And the part of the brain that makes sense of all the signals from these receptors — the olfactory bulb — is much larger in dogs than in humans.

Her book Inside of a Dog contains a dramatic example of canine olfaction.

Dogs encounter the world nose-first, so their world is probably very different from our own. We tend to perceive smells in very coarse black and white. There are good odors and bad odors and then a large category of odors we just can't detect.

But for dogs, everything has a scent, and all scent is information. Smells that would make us retch are just interesting to a dog. Overlaid on the visual landscape is the incredibly detailed terrain of smells. Luckily for humans, dogs are one of the few species willing to share their world with humans.

"Bears have a great sense of smell as well, but it would be really difficult to find a bear that wants to tell you consistently what it knows," says Megan Parker, who has made a living finding out what dogs know.

In 2000, Parker helped create Working Dogs for Conservation, a group of biologists and dogs that travel the world, studying rare, endangered and invasive species.

The company was born out of frustration. Parker says many field biologists spend their careers trying to get samples from extremely rare and reclusive species.

The dogs have found poop containing DNA samples from rare animals up in trees, under the water of fast-flowing creeks and buried by dung beetles.

"Just watching a dog respond to all the things out there you get just the tiniest, tiniest sense of how they experience the world," Parker says.

Vesely and Rogue head into the field to demonstrate the dog's ability to search for Western Pond Turtles. Rob Finch for NPR hide caption

Vesely and Rogue head into the field to demonstrate the dog's ability to search for Western Pond Turtles.

Many of the dogs employed at Working Dogs for Conservation aren't bred for detection work; they come from the pound.

"The reason these dogs are in shelters is because they would make really poor pets," Parker says. "They're obsessed by a toy to sometimes an incredible extent — like, they will jump through a plate-glass window to get to a ball outside."

That incredible "toy drive" means they have the focus and motivation to work a full day.

"These are the rare dogs that will be consistently good across long days and a harsh field environment as well as across their careers," Parker says. "They're just going to love this job [for] life."

Scientists and conservationists around the world have embraced detection dogs — so much so that a new organization (the International Conservation Detection Dog Association) has been formed to help certify dogs and handlers, and standardize training and search techniques.

The popularity of the dogs isn't hard to understand. They speed up a tedious process ... and they're the only piece of field equipment that can wag.

Stories From The Field 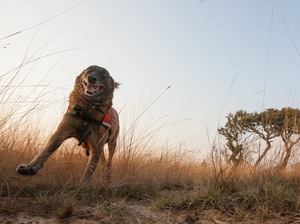 Pepin the Belgian Malinois chases down cheetah scat in Zambia. His handler Megan Parker explains that the work was tough, but there were occasional causes for celebration. 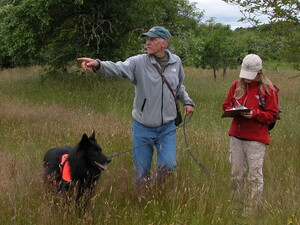 A Lupine By Any Other Name

Dave Vesely trained his dog Rogue to find Kincaid's Lupine, a rare flower that houses the eggs of an endangered butterfly. As Dave explains, Rogue was more competent than his handler in the field. 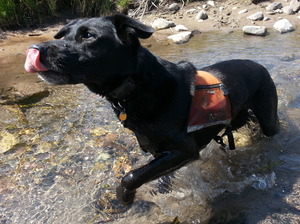 Wicket, seen here, traverses a Wyoming stream in search of moose poop. Megan Parker describes a typical day in the field, from a dog's perspective.