Accessibility links
Justice Department Tackles Quality Of Defense For The Poor An unprecedented recent court filing from the Justice Department could have dramatic implications for the representation of indigent defendants. The department argues that the fix for broken public defender systems could include a court-appointed monitor. 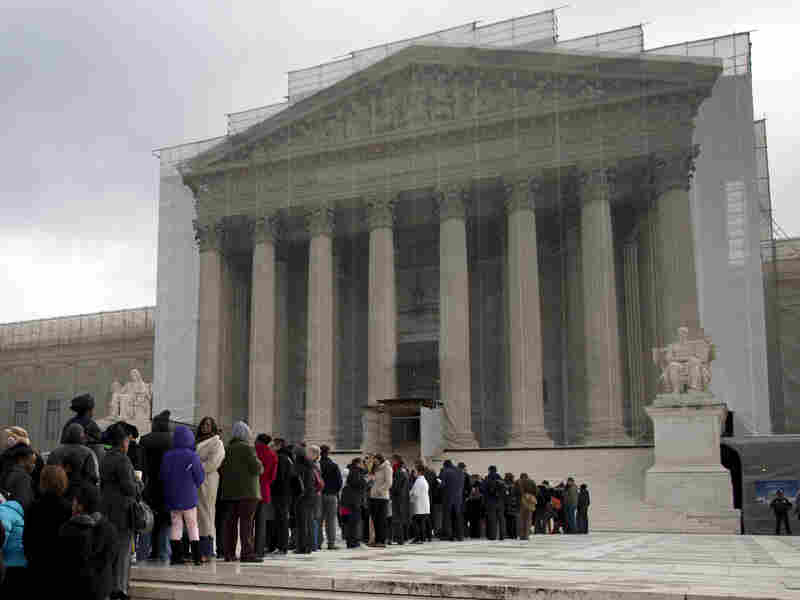 People wait in line outside the Supreme Court in February. In a landmark decision half a century ago, the justices guaranteed a lawyer for criminal defendants who are too poor to afford one. Evan Vucci/AP hide caption 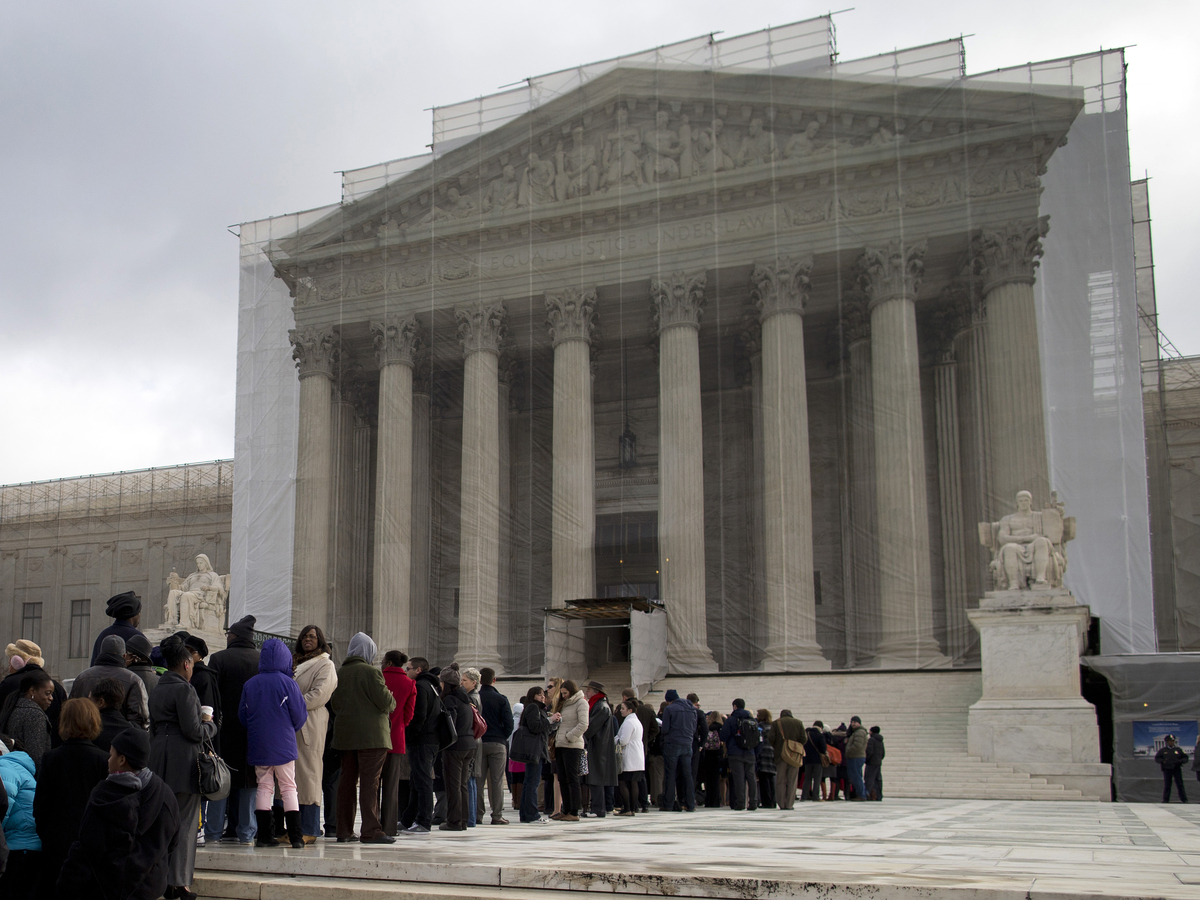 People wait in line outside the Supreme Court in February. In a landmark decision half a century ago, the justices guaranteed a lawyer for criminal defendants who are too poor to afford one.

All over the country, lawyers who defend poor people in criminal cases have been sharing their stories about painful budget cuts. Some federal public defenders have shut their doors to new clients after big layoffs. And in many states, the public defense system has operated in crisis for years.

But an unprecedented recent court filing from the Justice Department has cheered the typically overburdened attorneys who represent the poor and could have dramatic implications for the representation of indigent defendants.

"This is a breakthrough moment," Norman Reimer of the National Association of Criminal Defense Lawyers told an audience earlier this month at the Law Library of Congress. "If you want to talk about something that could give us cause for optimism, this to me is the most optimistic development we have seen in years."

At just 17 pages, the filing doesn't seem like a milestone. But lawyers at the Justice Department say the decision to weigh in on a case about the quality of indigent defense in two cities north of Seattle is nothing short of historic.

"We are absolutely committed to the principle that every indigent person who is accused of a crime is entitled to his or her constitutional right to effective assistance of counsel," says Jocelyn Samuels, who leads the DOJ civil rights unit.

Plaintiffs in the case say around the time they sued, the cities had just two part-time lawyers running 2,000 misdemeanor cases. The Justice Department didn't take a position on whether public defenders in those cities — Burlington and Mount Vernon, Wash. — systematically deprived people of their Sixth Amendment right to legal counsel.

But if a judge finds those cities should be on the hook, Justice lawyers urged that an independent monitor be appointed for public defender workloads, the first time ever in a federal case like this one. The overwhelming majority of cases about the quality of indigent defense move through state courts, which makes it much more rare for the U.S. Justice Department to intervene.

"Independent monitors have provided an objective source for assessing accountability, for evaluating whether an entity is complying with the terms of a consent decree and for gaining community confidence in the fact that the reforms will take place in a systemic and effective way," Samuels says.

For Andrew Cooley, who defends the two city governments in the case, there's no need for such an unprecedented step. The cities have hired a new law firm to handle defending poor people in misdemeanor cases, and Cooley says they've already reduced heavy caseloads in line with a proposal from top lawyers and judges in the state.

"And we just don't think they've shown that there was an imminent threat of irreparable harm especially where we're meeting this new 400-case-per-lawyer limit," Cooley says. "We are way ahead of any other city in Washington almost, except for a couple, and so it's not in a situation where we're well outside the norms."

Lawyers for the American Civil Liberties Union, who sued on behalf of misdemeanor defendants, would disagree with that assessment. Sarah Dunne of the ACLU didn't want to comment for this story while the litigation is underway. But in court papers, the ACLU says local defenders don't return phone calls, don't visit clients in jail and don't do any investigating for those clients.

Thomas Giovanni, a former public defender who studied the issues at the Brennan Center for Justice, told an audience at the Law Library of Congress recently that that's a pattern.

"Many people are arrested, processed and plead before they see a defender at all," Giovanni said. "It's not right. And the state system is the main system by which we put people in cages in this country."

Too often, ACLU lawyers say, the cities of Mount Vernon and Burlington fail to oversee the system or make sure public defenders there are following the Constitution. That's something an independent monitor could do. Monitors have often been used to oversee jails, schools and other systems — but cities and states regularly chafe at such oversight and the expense that comes with it.

Forcing the cities to pay for that kind of oversight could be counterproductive, according to Cooley.

"They operate a public defense system and a municipal court system only because we want to enforce our own local ordinances. And if this system becomes too expensive, we can just cancel court," Cooley says. "We don't have to run a court. We don't have to run a public defense system. We can just abrogate that to our local county and have them take it all over."

Still, Cooley says he understands why this case has become a national issue.

"The ruling will influence what hundreds of cities and local governments do just in Washington state; whether it'll have the same impact outside of Washington isn't clear. But without a lot of federal guidance on this, I can't imagine it won't," he says.

That's why lots of people will be watching for the judge's decision, expected this fall.