Accessibility links
New Carpet Factories Help Cushion Blows From Recession Losses Known as the "Carpet Capital of the World," Dalton, Ga. has struggled and lost thousands of jobs over the past decade. But carpet jobs are returning, and state officials say 7,000 new manufacturing jobs are coming to Georgia over the next five years. 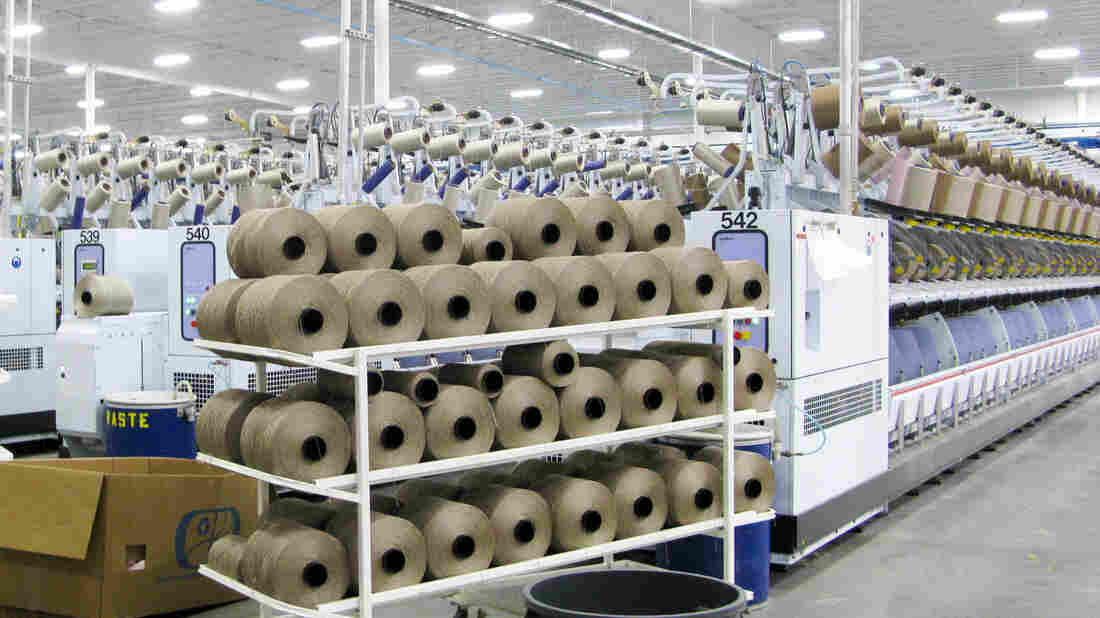 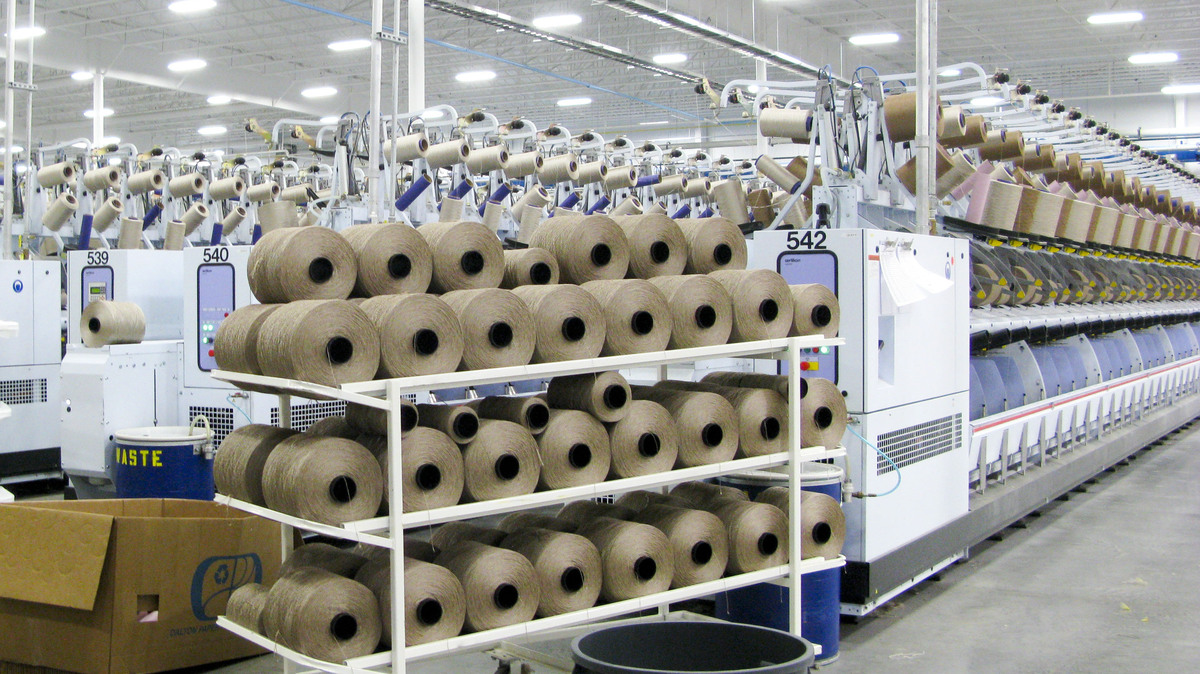 Large spools of fiber in the Engineered Floors carpet plant in Dalton, Ga.

Known as the "Carpet Capital of the World," Dalton, Ga., has struggled and lost 17,000 manufacturing jobs over the past decade.

But now, Engineered Floors is investing $450 million in two new manufacturing facilities and a distribution center in the area. The Dalton expansion is part of a resurgence in manufacturing in Georgia and it reflects an optimistic outlook for manufacturing across the Southeast.

Something Different, Something New

Kaila French and her young boys play with plastic model cars and trucks, rolling them on the wooden floor in her home in Dalton. French has a part-time job as a waitress but wants a full-time, more stable job in the carpet industry.

French is among hundreds who've applied for a job at the new Engineered Floors carpet plant in Dalton. The company announced this year it's bringing back some 2,000 jobs to northwest Georgia.

"I think it definitely helps when they're looking to hire that many people. I do feel more positive about getting a job," she says

Bob Shaw — a pioneer in the floor covering industry — founded a company, Shaw Industries, which dates to the 1960s. Twenty years later the Dalton-based Shaw Industries was among the largest corporations in the U.S. He eventually sold it to Warren Buffett.

"I grew up here [in Dalton], went to high school here and I've been here for the last 72 years," he says.

Shaw, now in his 80s, came out of retirement to start Engineered Floors, partly to bring jobs back to his hometown and because he believes the industry is recovering. "Yes, I'm committed to this area; I'm a citizen of northwest Georgia," he says. "But the truth of the matter is that you don't build businesses necessarily unless you can be successful."

"We literally start with a polyester chip — a plastic chip," says James Lesslie, the No. 2 man at Engineered Floors. "We start there and then we take it the entire process and what comes out is finished carpet, all under one roof."

The chip that looks like a tiny plastic pellet contains the color that the carpet will become, eliminating the dyeing process. It saves water and power. The fibers are rolled onto huge spools and twisted together before heading to the giant tufting operation. 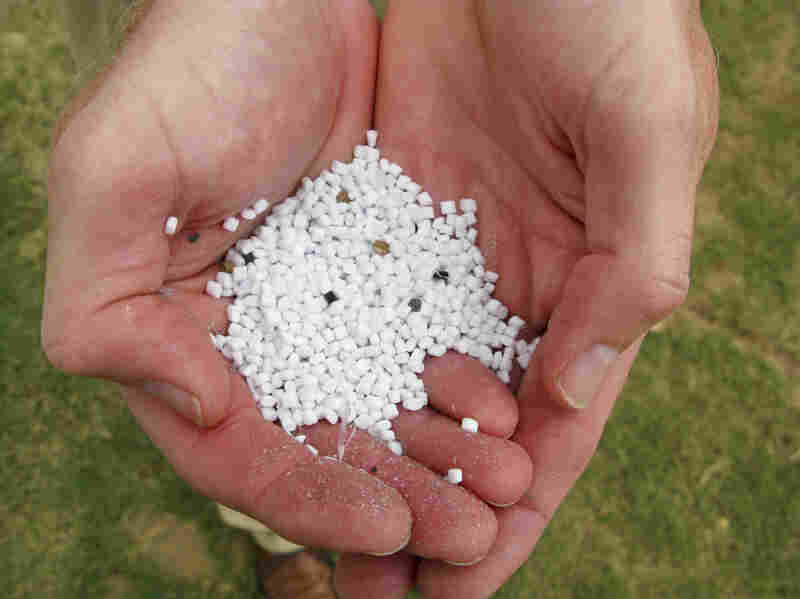 Polyester chips that contain the color a carpet will become help save water and power at the Engineered Floors carpet factory. Kathy Lohr/NPR hide caption 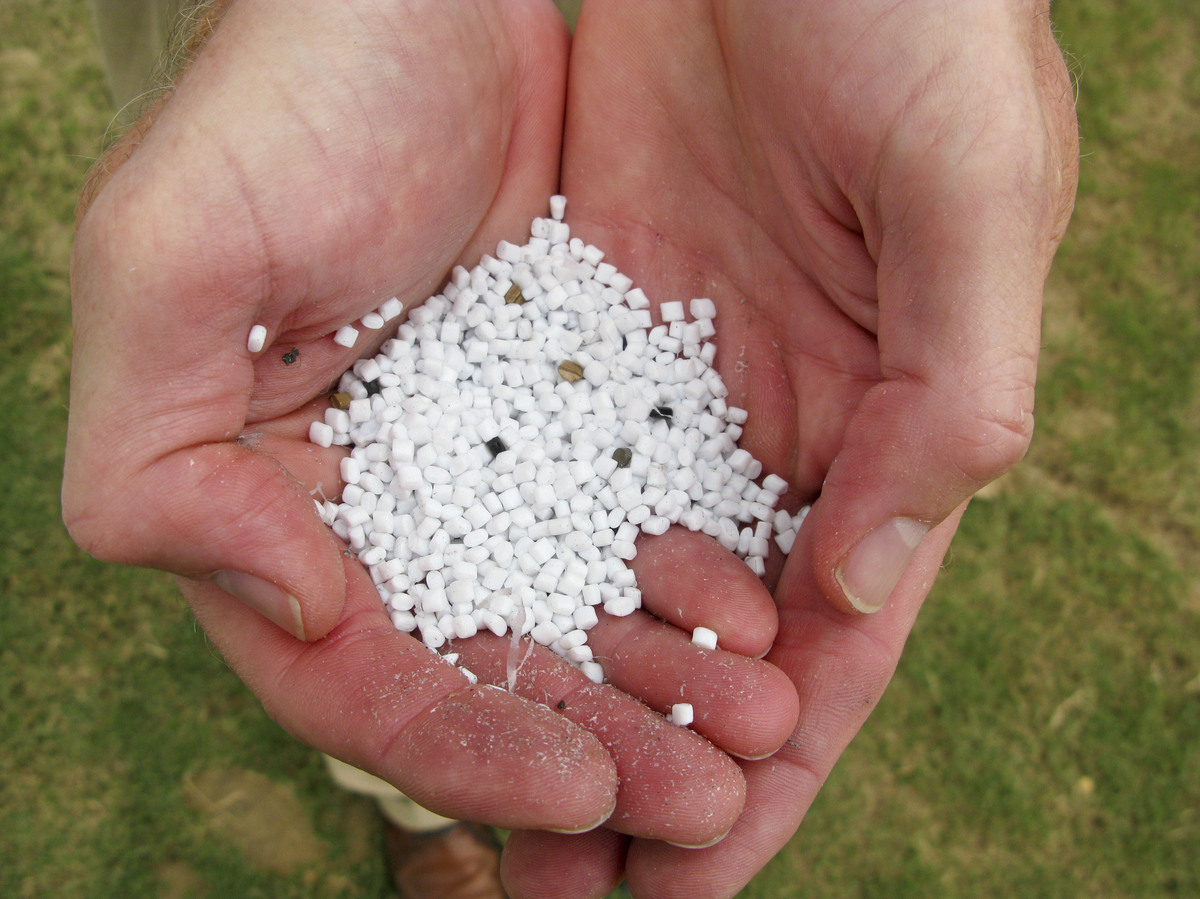 Polyester chips that contain the color a carpet will become help save water and power at the Engineered Floors carpet factory.

Tufters with about 1,400 needles act like giant sewing machines weaving fibers into a piece of cloth that will become carpeting. Lesslie is excited about the opportunities here and at another Engineered Floors plant where construction just began.

"We've added 500 employees," he says. "We had about 700 last year. Added 500 this year. There's all kind of ways to measure, but to us, when we're focused on job creation, employee growth is certainly something we can look at and that's about a 40 to 50 percent growth rate."

This is a turnaround in an area that experienced a deep downturn, as did the nation, which lost more than 2 million manufacturing jobs during the recession. While those jobs have not returned as fast as predicted, Chad Moutray with the National Association of Manufacturers says things are looking good here.

"The Southeast has been very aggressive in terms of economic development, in terms of providing incentives not just for manufacturers but businesses overall," Moutray says. "I think that helped to lure a lot of investment in the Southeast in particular."

Somebody is reinvesting in us. We are important enough that they care to reinvest and they don't have to, and it's a great thing.

For example, auto plants are thriving. Boeing has moved some of its 787 production to South Carolina. And back in Georgia, Caterpillar announced it will produce small tractors and Baxter International will manufacture pharmaceutical products.

People here are feeling it. Linda Gale Thomas was laid off from the carpet industry after 30 years, but she got one of the new jobs at Engineered Floors.

"And people are happy because we know we can survive. Somebody is reinvesting in us. We are important enough that they care to reinvest and they don't have to, and it's a great thing," she says.

In addition to the 2,000 new jobs at Engineered Floors, other carpet jobs are returning, and state officials say 7,000 more new manufacturing jobs are coming to Georgia over the next five years.