Accessibility links
Book Review: 'Duplex,' By Kathryn Davis Books about quantum mechanics can be pretty dry stuff. But when a novelist conjures up multiple worlds, the results can be spellbinding, even when it's no easy read. Such is the case with Duplex, the latest book from Kathryn Davis. Reviewer Rosecrans Baldwin, says this one's worth the effort. 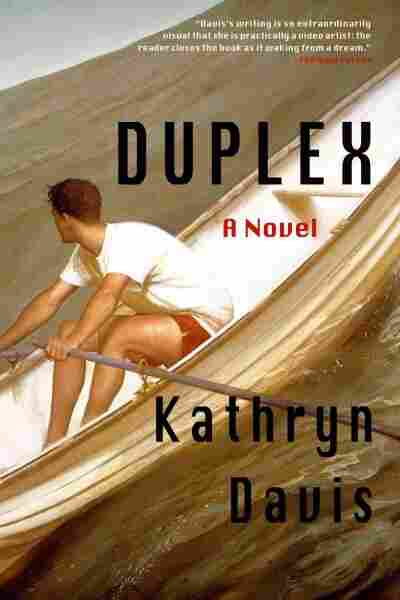 You're walking your dog in a suburb that may or may not exist in this dimension. The dog whines. You ignore him. Anyway, you're too busy looking out for that sexy, evil sorcerer. Suddenly, a gray rabbit appears, and you realize: the world is ending.

That is not a direct quote from Duplex, the latest novel from Kathryn Davis. Her sentences need a bit too much explanation. But there are plenty of passages I could cite that are equally bewildering. Really, I can't remember the last time I read a book so disorienting. Half the time I didn't know what was happening. Who was speaking. Whether or not they actually existed. But I can tell you, reading this book is a blast.

Duplex is a traditional love story tucked inside an adult fairy tale, wrapped in science fiction. I think there are two planets in the novel. Possibly they're the same world. Possibly they're neighbors. In the end, it doesn't really matter.

World number one is like a 1950s suburb. Kids play in the street. Neighbors gossip. Teenagers find sex confusing. So far, so good. However, there are also robots, but they're mostly like everybody else: discontented. Also, there's a playboy sorcerer, who will make your dreams come true for the measly price of your soul. And the suburb, as far as I can tell, operates in space and time like Brigadoon.

World number two: it appears to be our own. There, we track a group of schoolgirls at different stages of life. The head girl, Janice, is a bossy know-it-all. She's that older girl on the playground who keeps the little ones enthralled with dubious wisdom. But the stories Janice tells actually hearken back to that first world I mentioned — in fact, the two worlds may exist on top of one another, hence the novel's title. As you read, you realize it might even be possible to pass from one world to the next.

Thankfully, the laws of quantum mechanics do not power Duplex's magnetism. Instead, it is Davis's beautiful prose, her psychological awareness. She writes, about one of her robot characters, "The act of pretending to get older had managed to confer a kind of dignity on the robot, making it hard to remember that in actuality it was the size and shape of a needle."

Speed-readers, skip sentences at your peril — if only because something will happen that won't make sense for fifty pages, then turn out to be an essential narrative hinge. Halfway through, I put the book down for two days. When I picked it up again, I had to start all over just to understand what the hell was going on. Still, I wouldn't take back one minute of reading. Sometimes really good company, the interesting, mind-expanding kind, leaves you scratching your head.