Accessibility links
California Lawmakers Target Boy Scouts' Tax-Exempt Status Legislators are considering stripping the Boy Scouts of America of its tax-exempt status in the state because of the organization's ban on gay and lesbian adult leaders. Scout leaders warn the move would cause major damage to a group that serves 180,000 California youth. 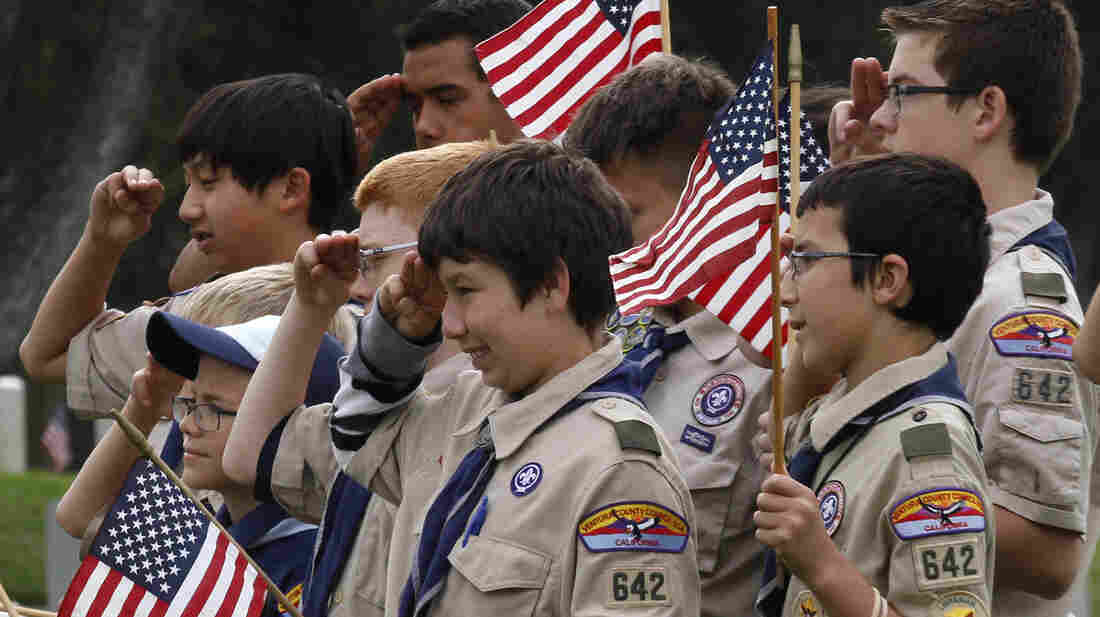 Boy Scouts attend a Memorial Day event in Los Angeles in May. A bill under consideration by the California Legislature would take away the tax-exempt status of the Boy Scouts of America. Jonathan Alcorn/Reuters/Landov hide caption 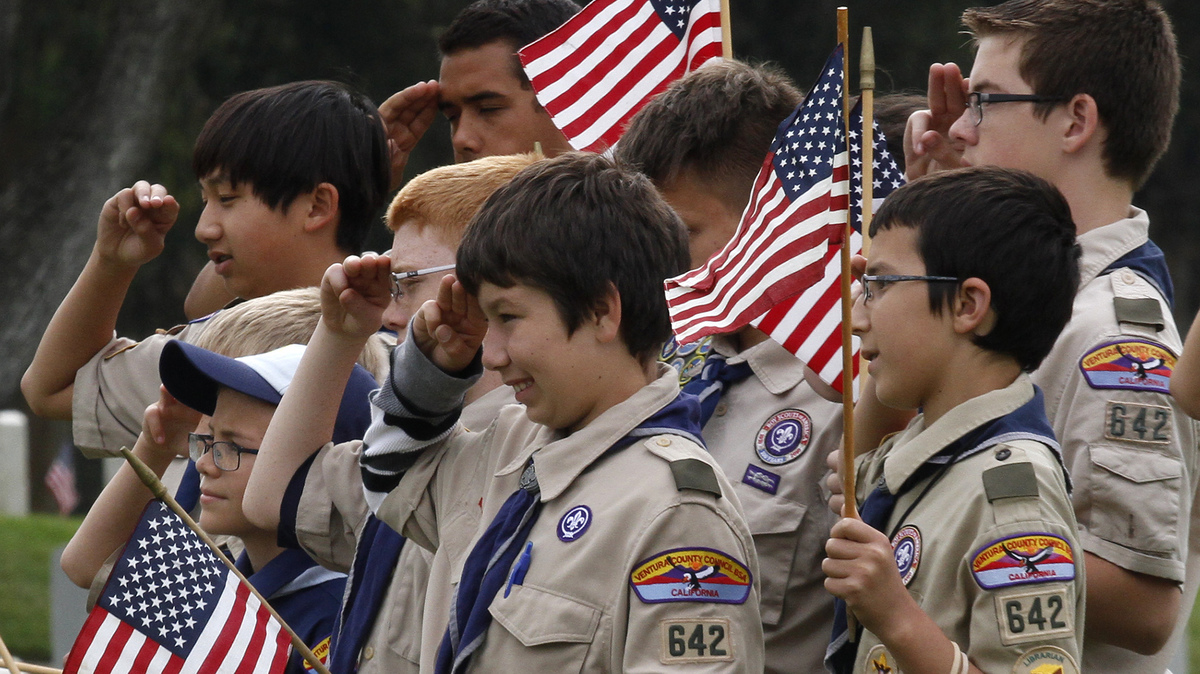 Boy Scouts attend a Memorial Day event in Los Angeles in May. A bill under consideration by the California Legislature would take away the tax-exempt status of the Boy Scouts of America.

Beginning next year, the Boy Scouts of America will allow openly gay youth to join as members. But the policy change doesn't go far enough for Democratic lawmakers in California. They're on the verge of passing a bill that would strip tax breaks for the Boy Scouts and any other group that discriminates against gay, lesbian or transgender members.

Ricardo Lara, a Democratic state senator from Los Angeles County, wrote the legislation that would take away the Scouts' nonprofit tax breaks. He finds the Boy Scouts' new policy, which still bars gay and lesbian adults from serving as leaders, unacceptable.

"It's all, in my opinion, based on this homophobic sentiment that somehow you're an LGBT adult and somehow you pose a threat to children all of a sudden," Lara says.

For A Scouting Leader, Second Thoughts

Ask 17-year-old Chris Tennant what his favorite Boy Scouts experience is, and he'll tell you about the 91-mile backpacking trip his troop took through New Mexico last year. The Scouts got a chance to cook, shoot rifles — even climb up tall poles using ropes.

"I was pretty terrified going into that," Tennant says. "I wasn't sure if I was going to do it, as the rest of my troop was lining up. But I did it. I conquered my fear. And it was truly an amazing experience." 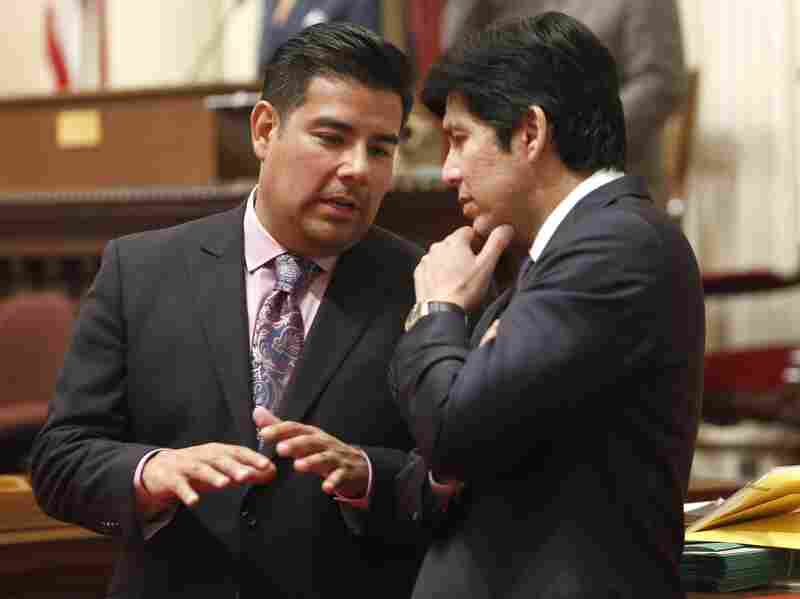 California State Sen. Ricardo Lara (left), who wrote the bill revoking the Boy Scouts' tax-exempt status in the state, talks with Sen. Kevin de Leon at the Capitol in Sacramento in May, when the Senate voted 27-9 in favor of the measure. Rich Pedroncelli/AP hide caption 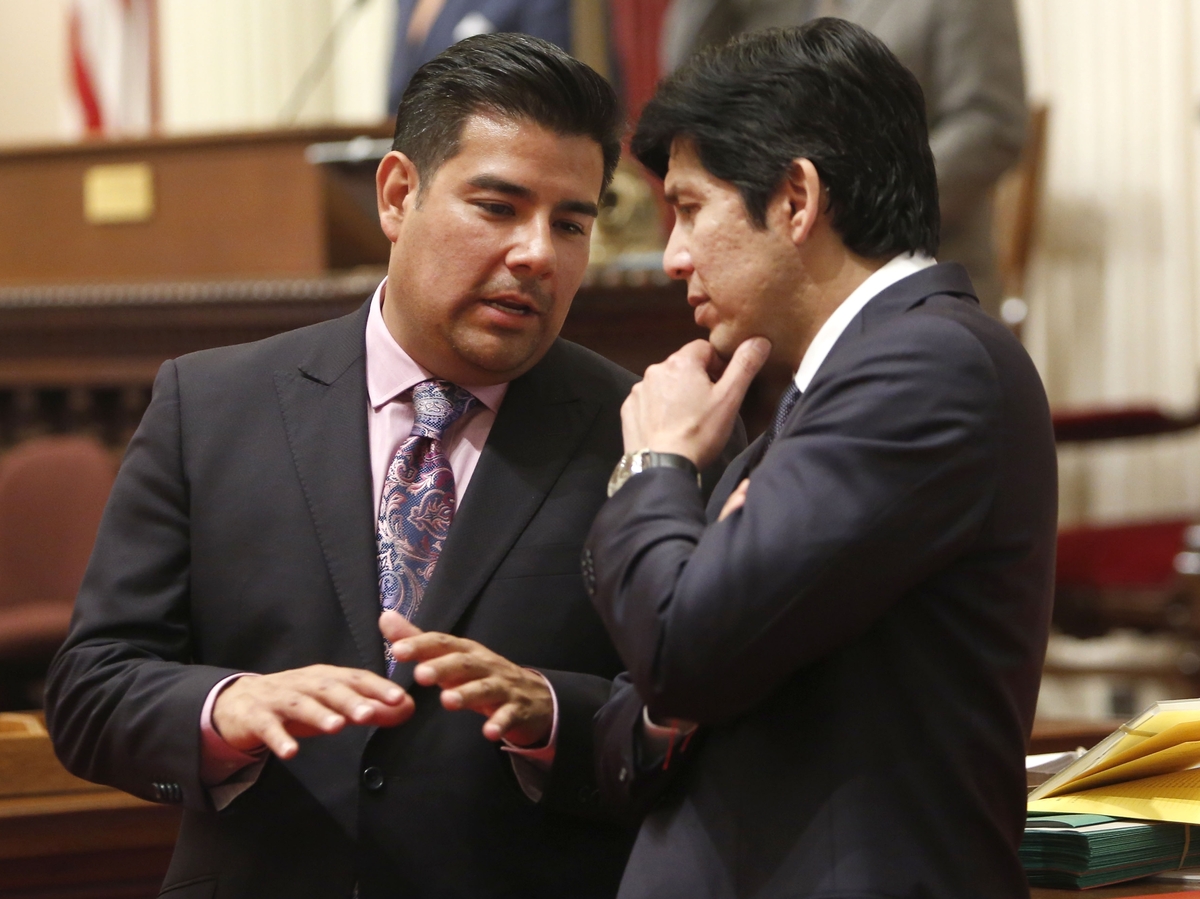 California State Sen. Ricardo Lara (left), who wrote the bill revoking the Boy Scouts' tax-exempt status in the state, talks with Sen. Kevin de Leon at the Capitol in Sacramento in May, when the Senate voted 27-9 in favor of the measure.

Chris' dad, Steve, went on the 2012 trip, too. It motivated him to take over one of the positions running Troop 57 in the Oakland, Calif., suburb of Moraga. More boys deserve that kind of opportunity, he says. "I could see the impact it had on them [and] it was transformational for me."

But a week after Steve Tennant became one of the troop's committee chairmen, a nearby Scout troop denied 17-year-old Ryan Andresen Scouting's highest honor, the Eagle badge, and then kicked him out of the organization. Their reason: Ryan is gay.

"I found out about it a few days later and wondered for myself, 'Did I join the wrong group here?' " Tennant says. "Because I can't imagine being a part of a group that would do that to a boy. Especially a group that's about helping turn boys into leaders."

Ryan's ouster made national news, and the backlash against the move helped push the organization to change its rules and allow gay youth to be members. But with gay adults still banned from leadership positions, Lara decided to act. If passed, the measure he drafted, SB323, could cost Scouting organizations in California a total of $250,000 a year, by forcing them to pay sales and use taxes.

A History Of Gay Rights Legislation

National Boy Scout leadership refused a request for an interview for this story, but in an emailed statement, the organization wrote, "The State of California needs Scouting, which gives young people the opportunity to develop skills and take responsibility while inspiring a lifetime of character and service."

The California Association of Nonprofits also opposes the measure. Jan Masaoka, the group's CEO, says she opposes discrimination but she doesn't think the relatively obscure board that oversees California tax policy should be in the position of ruling on whether youth groups discriminate.

"This particular narrowing down and targeting of youth groups — which is basically a thinly veiled attack just on Boy Scouts of America — it's a distasteful way to do public policy," Masaoka says.

For their part, Chris and Steve Tennant are in favor of Lara's bill — and even traveled to the state capital, Sacramento, this summer to support it. They say they love and support Scouting and hope financial pressures the measure would create will force the organization to change its policy.

The measure passed the California Senate by a 27-9 vote in late May and is now awaiting a final Assembly vote.