Accessibility links
Spirit Airlines Sees Business Take Off With Raunchy Ads Spirit Airlines is known for a lot of things: Low fares, fees for virtually everything, and even its rate of complaints. But the airline also gets its name out there with snappy and sometimes raunchy ads. 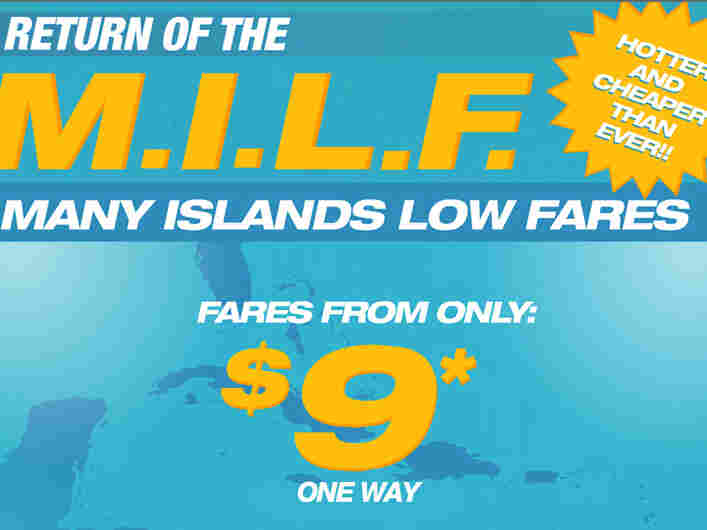 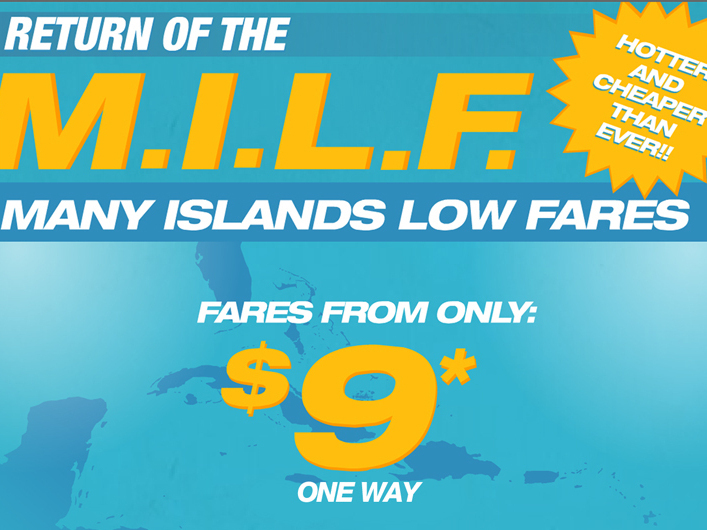 A Spirit Airlines ad uses a crass reference as a way to wink at its customers.

South Florida-based Spirit Airlines is known for being cheap. It boasts "ultralow" base fares and then charges for items such as carry-on luggage or printing out your boarding pass at the airport.

That thrift carries over to Spirit's advertising. Even compared with other low-cost airlines, Spirit spends almost nothing on ads. And yet the company makes a surprising splash with its campaigns. A visit to Spirit headquarters reveals the secrets of its marketing.

Spirit Airlines' corporate conference room is about what you'd expect: A drop ceiling, people in button-down shirts sitting around a dark-wood table, listening to a jargony presentation.

"We've been successful at promoting our ultralow fares in a way that keeps costs down," says Bobby Schroeter, vice president of consumer marketing, while presenting a PowerPoint of successful Spirit campaigns.

One of the ads shows a series of islands and four bright-yellow letters.

"We have our very famous, 'M.I.L.F.' ad — Many Islands Low Fares," Schroeter says. The slogan continues with, "hotter and cheaper than ever."

The process starts with customers like Yessica Diaz and her boyfriend, Edwin Irizarry. They were flying Spirit out of Fort Lauderdale-Hollywood International Airport.

"Yeah, because it's cheap," Diaz says.

Diaz is now one of 6 million people on Spirit's email list.

Instead of buying TV commercials, Spirit blasts out email ads like "M.I.L.F." and, unsurprisingly, it gets reactions.

"It's kind of, like, funny and insulting, I guess," Irizarry says.

Spirit Airlines President Ben Baldanza, who appeared on the show, is very good at turning a scolding into a value proposition. "Our consumer feedback has been positive, and the only thing we think is obscene is the fares that most of our competitors charge," he said. 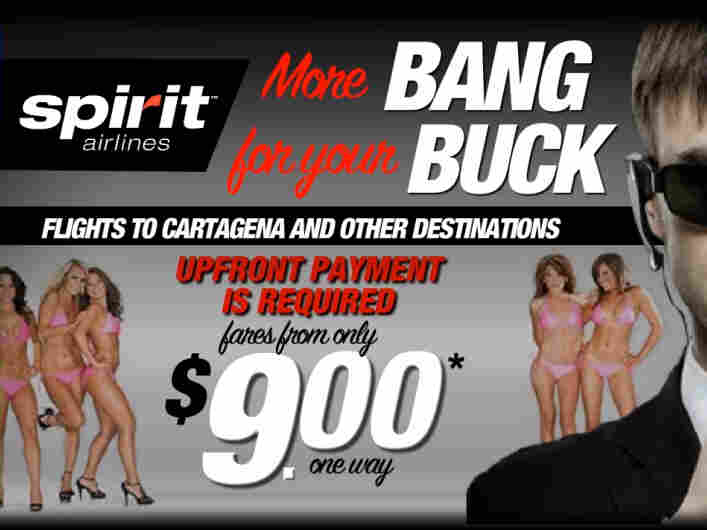 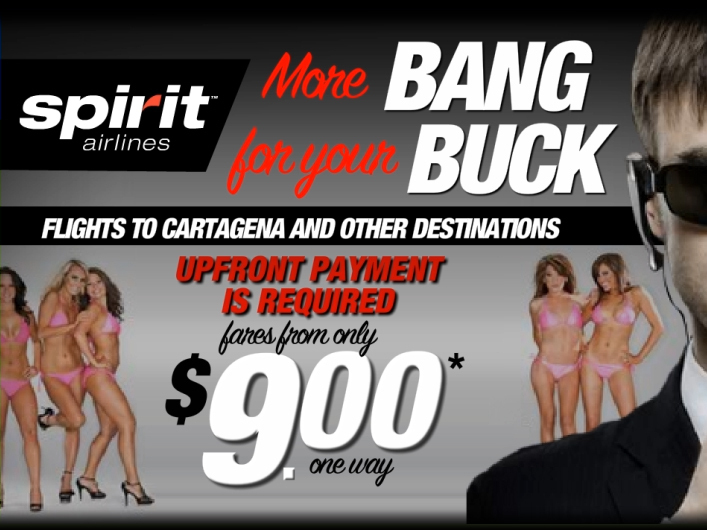 Spirit Airlines has gotten notice â and criticism â for its racy ads.

Spirit can do topical material, too: When the BP oil spill happened in 2010, Spirit ads made NBC News. One ad said, "Check out the oil on our beaches." Only it referred to suntan oil on women.

The first Anthony Weiner scandal? Spirit got time on a syndicated pop culture show. That ad featured "the Weiner Sale: With fares too hard to resist."

Spirit says it has churned out ad campaigns within three hours of a news event, which helps explain their graphics' distinctively campy look.

"It borders on the unprofessional," says Armando Lopez, who runs Navigant Marketing and has helped brand airlines in the past. "It looks like something that an office clerk did in PowerPoint on their free time. And no offense to the office clerk in saying that."

But Stuart Klaskin, CEO at Jetstream Aviation Capital, an airline consulting firm in Miami, says the cheap look of Spirit ads is actually very important. "If you're selling, 'We're inexpensive,' then anything you do in your branding that makes you look like you're spending a lot of money, the consumer ultimately translates that into, 'Hey, I'm paying for that.' "

There is, of course, also the issue of Spirit's quasi-offensive content.

The Better Business Bureau has plenty of complaints about Spirit Airlines but none of them about the subject matter of the company's ads.

That said, in 2008 the head of the Association of Flight Attendants formally complained to Spirit about its M.I.L.F. ad.

Spirit claims the goal isn't to offend, just to get attention.

"We're a family company and we look at all these things with the 'Scooby-Doo test,' " says Barry Biffle, Spirit's former chief marketing officer. He says Spirit turned to shock marketing back when no one knew the company.

And by the "Scooby-Doo test," he means kid-friendly — like how children could enjoy Scooby-Doo cartoons. "But they didn't get the fact that Shaggy was the only one who could actually hear the dog," Biffle says. "They were driving around in a good-times van. They always had the munchies."

And so maybe Spirit's shock marketing is the not-so-subtle marijuana joke of the airline industry.

It apparently hasn't hurt the bottom line. Last year, The Wall Street Journal said Spirit was "pound for pound, the most profitable airline in the U.S."

As for Biffle — the guy who's ultimately responsible for all those ads — he got a job this summer running his own low-cost airline: VivaColombia.