Accessibility links
Bald Eagles Are Back In A Big Way — And The Talons Are Out Decimated by hunters, insecticides and other human pressures in the 1960s and 1970s, America's emblematic bird is once again flying high. Roughly 10,000 mated pairs now nest in the continental U.S., up from about 500 in the 1970s. But more birds also means fierce competition for territory and mates.

"It's a jungle if you're an eagle right now on the Chesapeake Bay," says Bryan Watts, a conservation biologist at the College of William and Mary in Williamsburg, Va. "You have to watch your back."

Americans have long imagined their national symbol as a solitary, noble bird soaring on majestic wings. The birds are indeed gorgeous and still soar, but the notion that they are loners is outdated, Watts and other conservationists are finding.

After nearly being wiped out, inadvertently, by strong insecticides that were in widespread use until the 1970s, bald eagles have come roaring back in places like the James River, south of Richmond, Va. Today the raptors fly around together above the James in big groups, hang out in communal roosts and are fiercely competitive.

As Watts motors his boat along a short stretch of the James River near Hopewell, Va., on a late-summer eagle survey, so many eagles fill the sky that he can't talk quickly enough to point them all out to me. 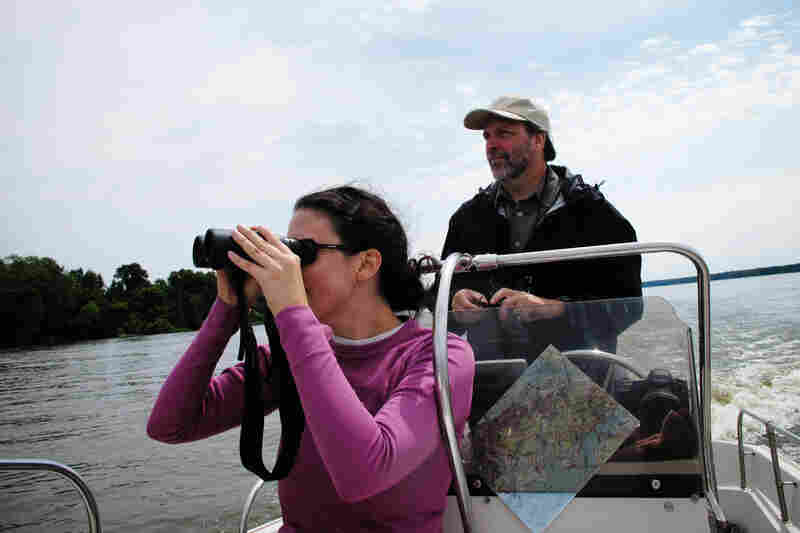 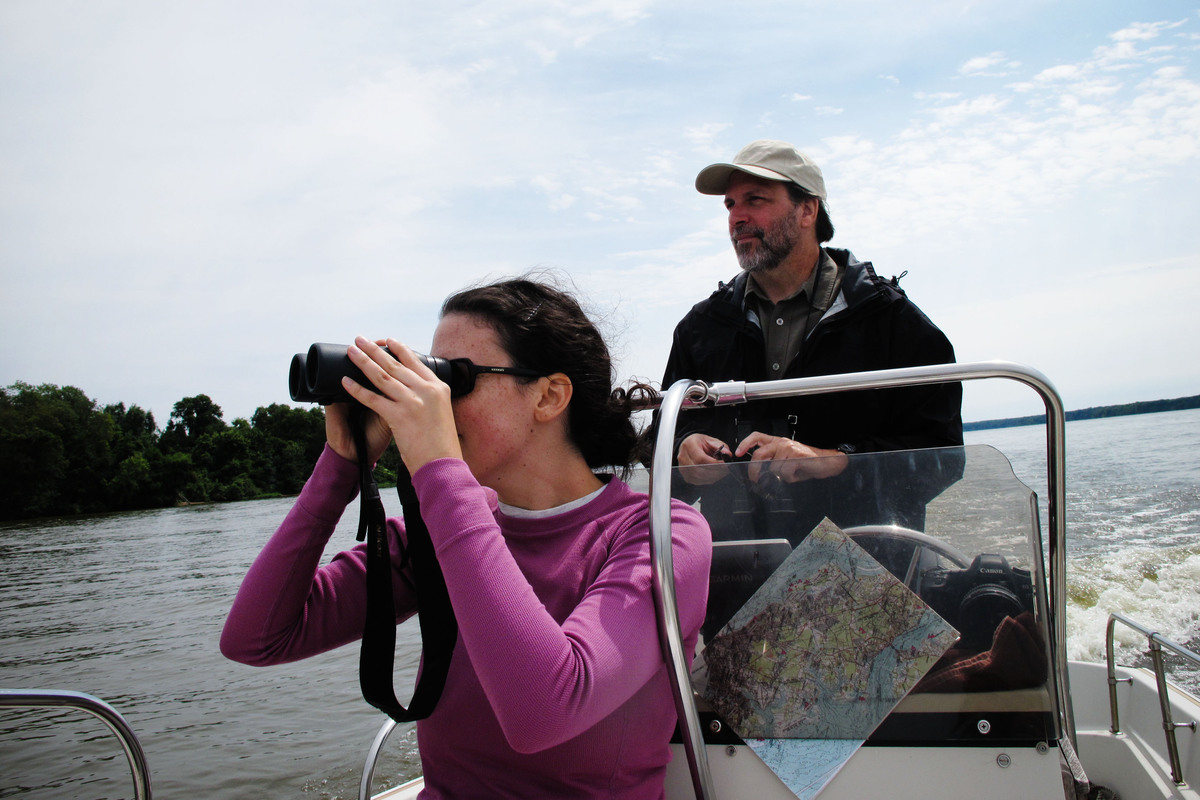 Bryan Watts, a conservation biologist at the College of William and Mary, and biology graduate student Courtney Turrin, survey eagle behavior along the James River in late-summer.

Forty years ago, Watts, says, we probably would not have seen a single bald eagle here. A prime contributor to their disappearance in this region was located just upriver, where Bailey Creek meets the James. In the 1960s and 1970s, Allied Chemical Corporation produced a pesticide called Kepone (chlordecone) at its plant in Hopewell, Va.

"And that's the place where Kepone was dumped into the bay," Watts says, as he idles his boat near the mouth of the creek. "It was dumped out on the ground and made its way into Bailey Creek and from there went throughout the Chesapeake."

Pesticides like Kepone and DDT helped put bald eagles on the endangered species list. Eagles kept reproducing but their eggs weren't viable and didn't hatch. By the 1970s, there were no eagle nests at all on the James River, and fewer than 500 nests in the Lower 48. Watts says that grim reality woke up Americans.

"We as a society decided when the population was declining that that's not what we wanted," Watts recalls.

The United States banned the pesticides and the shooting of eagles. Wildlife officials started protecting the birds' nesting territory and setting aside tracts of land for their recovery.

It's like a game of musical chairs, but with bayonets. Eagles have tremendous weaponry. And so when they fight, it can oftentimes be to the death.

In 2007, thanks to all those measures, the bald eagle came off the endangered species list. Its rebound has come without the struggles and public resistance that continue to mire efforts to bring back wolves, condors and grizzlies.

Today more than 10,000 eagle pairs nest each year across the Lower 48, and many more in Alaska. And nowhere is their comeback more dramatic than along the James River, where they once again dominate the avian scene.

"The greatest thing about that [is] that it was our society that brought them back," Watts says.

Interestingly, he says, it can still be tough to be a bald eagle along the James these days — but for new reasons. As the population of the birds has rebounded, there's less habitat for all the eagles reaching maturity as they try to find mates and claim territories. Only 1 in 5 finds a mate today, the evidence suggests, compared to nearly all, a few decades ago.

Watts ties up his boat near one of the more than 200 nests located along the river. This one is 80 feet up in a loblolly pine, one of the tallest trees around. Eagles build nests near the top of the forest canopy, probably so they can get to them easily without having to dodge other trees, Watts says.

"Eagles have long wing spans and so they have a hard time flying through trees," he explains.

The breeding season's over, but Watts can still learn a lot from the empty nests. The bones on the forest floor, for example, tell him that these birds fed their chicks blue catfish, an invasive species that apparently is an eagle favorite. 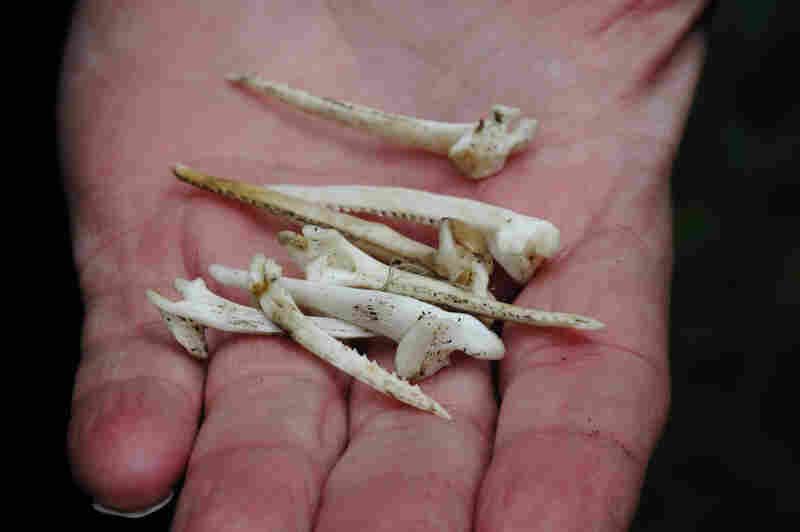 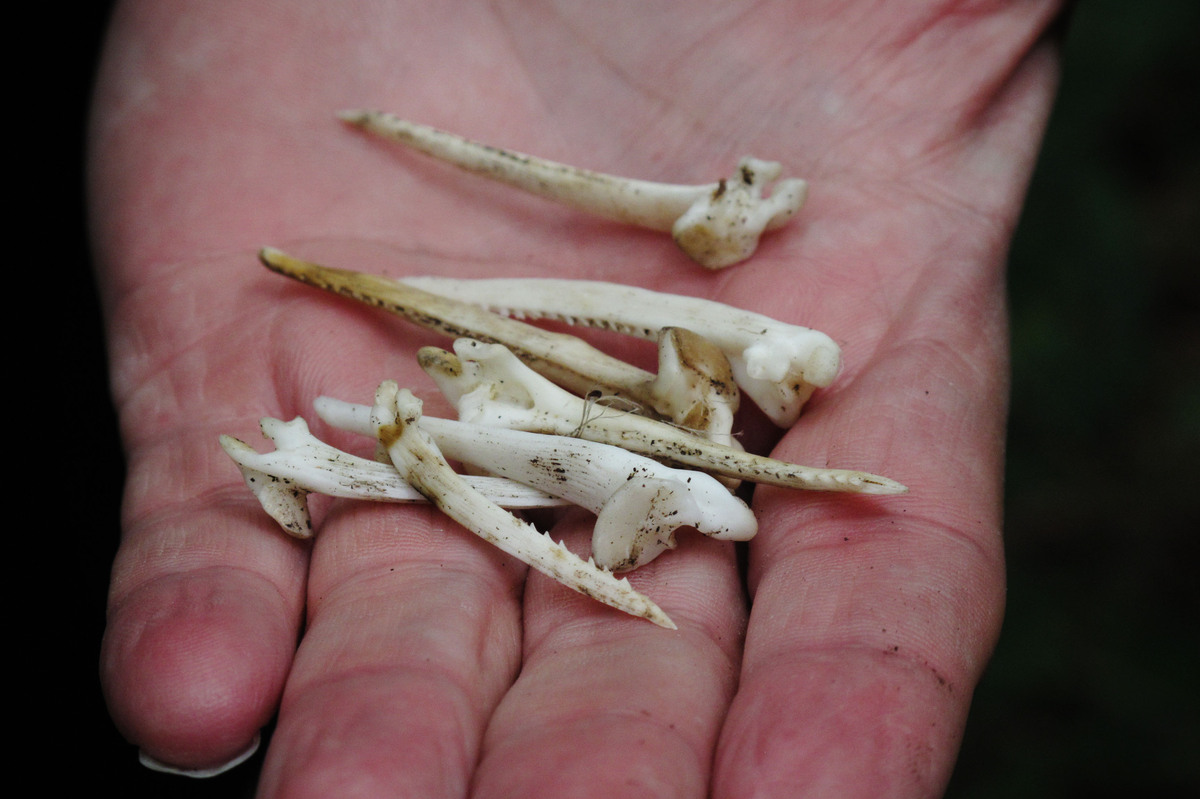 Eagles picked these bones of a blue catfish clean.

An eagle pair will return to the same nest every year and defend it ferociously. All the so-called "floaters" — adult birds without territory — covet the existing nests, Watts says. And, increasingly, they are attacking their elders to try to steal territory and mates.

"It's like a game of musical chairs, but with bayonets," Watts says. "Eagles have tremendous weaponry. And so when they fight, it can oftentimes be to the death."

Watts says sometimes interlopers break up nests and the chicks die. So these days, eagle parents apparently have a new job. One parent will stand guard while the other gets food.

"Sometimes one of them rolls [the other] over, upside down in the air," Turrin says. "Eventually they'll have to let go because they'll start falling."

An especially striking eagle, a large female, catches Watt's eye. He points out its dull bill, which soon will take on the brilliant yellow-orange hue of a mature eagle.

Watts puts a positive spin on the challenges this eagle probably will face in the coming years. The extra time she'll likely spend as a single adult will give her the experience she needs to be a better hunter and provider for her chicks in the future, he says.

"To see these species adapting to the different situations and [see] how they solve the different problems that they're faced with, is way more interesting than [the] static view [we've had]of them in the past," Watts says.

The delay in breeding is only one of the changes in eagle behavior that fascinates Watts. He's also intrigued by interactions among eagles and other birds that were once rare.

Great blue herons, for instance, also have made a comeback on the James, apparently to the eagles' advantage. On the James, some eagles nest among heron colonies.

"We have always wondered," Watts says, "whether eagles were sort of 'shopping next door' " — snatching heron chicks to feed to their young.

Turns out that's just what they're doing. This year, Watts found blue heron wings in a nest, alongside chirping eagle chicks. And there's evidence the big raptors may be similarly raiding the nests of gulls and pelicans elsewhere on the Chesapeake Bay, he notes.

Watts says he'll be interested to see what happens to these other species, now that they are on eagles' shopping list.

Bald eagles have become our nation's best conservation success story, Watts says. Now's the time to see the birds in action, and discover what they're really like.

The audio version of this story, as did a previous Web version, says that by the 1970s, there were fewer than 500 eagle nests in the United States. That number refers to the number of nests in the Lower 48.