Accessibility links
Everybody Loves John Fogerty After years of refusing to play his Creedence Clearwater Revival material, the rock icon has reinterpreted his early hits with a new generation of artists — from Dave Grohl to Brad Paisley — on his new album, Wrote a Song for Everyone. 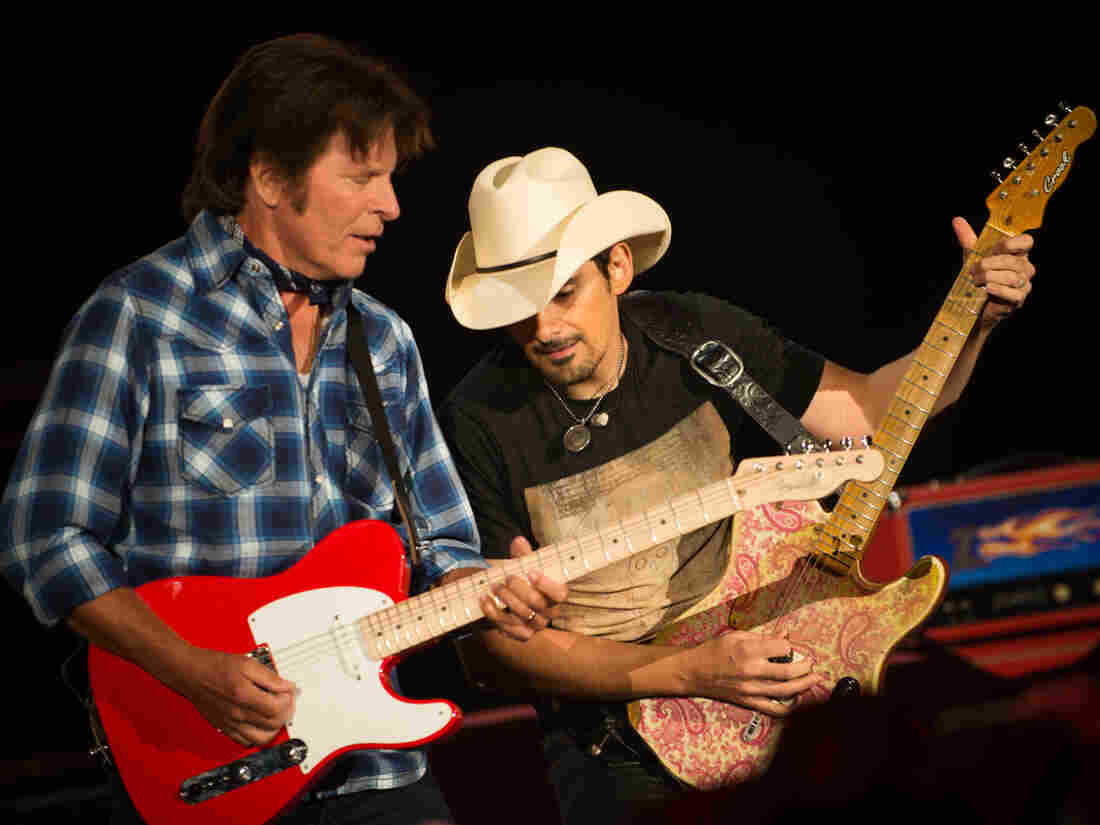 John Fogerty teams up with Brad Paisley, whom he calls one of the greatest guitarists alive, in "Hot Rod Heart" on his new album, Wrote a Song for Everyone. Benjamin Enos/Courtesy of the artist hide caption 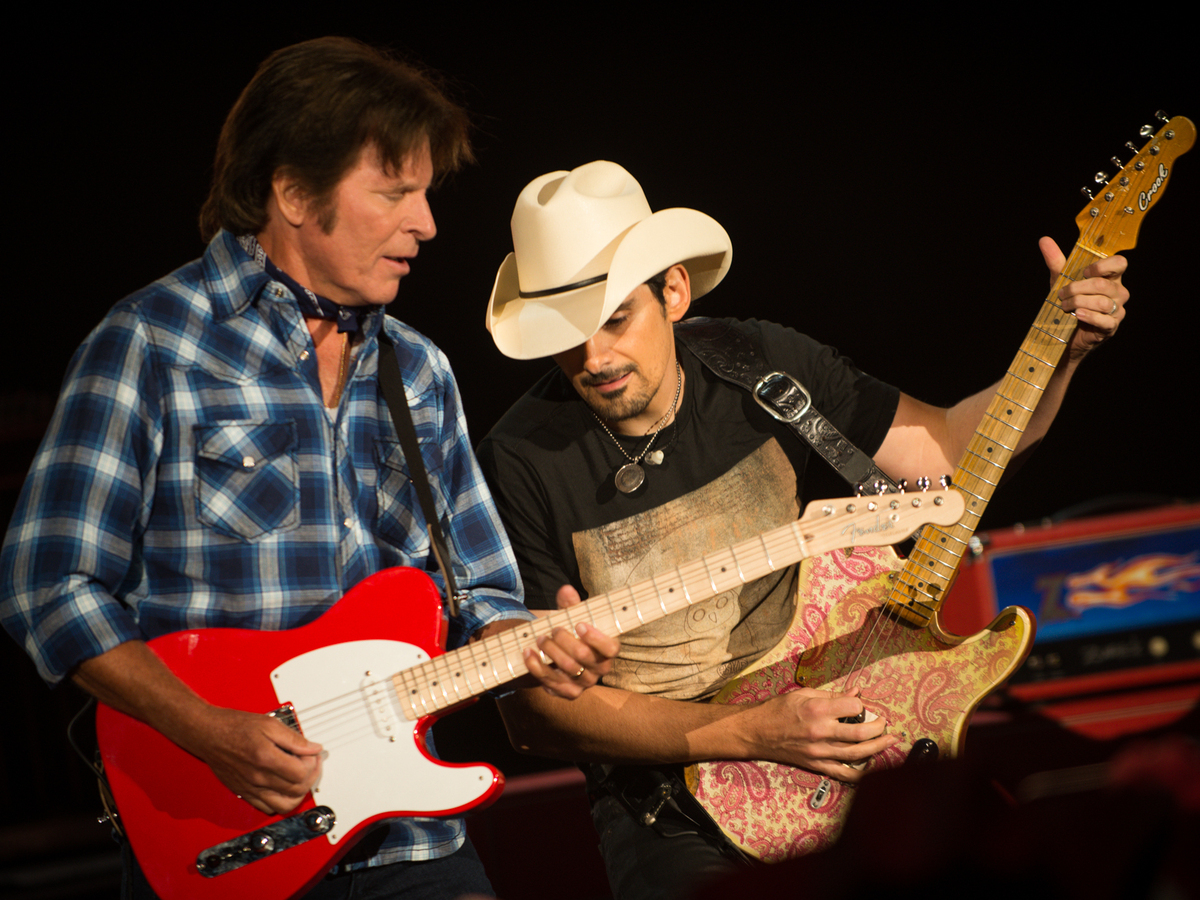 John Fogerty teams up with Brad Paisley, whom he calls one of the greatest guitarists alive, in "Hot Rod Heart" on his new album, Wrote a Song for Everyone.

Benjamin Enos/Courtesy of the artist

Imagine you wrote some of the most enduring songs in 1960s rock, but then got so mired in legal and financial issues with those same songs that you felt you couldn't play them.

That was the story of John Fogerty and the music of Creedence Clearwater Revival. Today, Fogerty is not only performing his early hits again but has also reinterpreted them with a new generation of rock and country stars on his new album, Wrote a Song for Everyone.

The band Foo Fighters joins Fogerty on the record's cut of "Fortunate Son." Fogerty wrote it more than 40 years ago, but the song has hardly aged — partly because, at 68, he sounds remarkably the same and partly because the song's themes of privilege and class are as current as ever, as Fogerty says.

"When I sing 'Fortunate Son' now, part of me is remembering a time a long time ago," Fogerty says, "and part of me is — I could have walked into my bedroom yesterday or tonight and written the same song."

Wrote a Song for Everyone features an array of A-list artists playing Fogerty's songs — like "Born on the Bayou" with Kid Rock, "Long As I Can See the Light" with My Morning Jacket and "Bad Moon Rising" with the Zac Brown Band. The whole album feels energetic and joyous.

"I'm sure that has something to do with how I'm feeling myself these days and how I'm feeling about the songs I wrote," Fogerty says. "It's all in a really happy, good place now. I only say that because some of you may have heard I had a few difficulties in the music business."

In case you haven't heard, here's a quick summary: Back in the '60s, Fogerty signed away the rights to his Creedence songs to Fantasy Records. For decades he battled the label, as well as his former bandmates — including his brother. Fantasy notoriously sued Fogerty for plagiarizing himself. For many years, he refused to play his early hits. To explain, he says he imagined himself singing Creedence songs in a cheesy Las Vegas act, circa 1979.

"And there you are, night after night: 'Ahooga-hooga-hooga, rolling on the river,' " Fogerty says in mock singsong. "I just figured at some point I would be desensitizing myself — you know, get drunk, probably drugs, whatever, trying to shut out of my brain that voice that's going, 'What the hell are you doing? How could you fall this far? Or how could you be so unconnected to the music?' Because nothing would have changed, other than that I'd be getting more money."

"It'll Burn The Hairs Off Your Face"

Even while Fogerty wasn't performing his songs, everyone else was. Dave Grohl, drummer for Nirvana and frontman of Foo Fighters, points out that when Kurt Cobain and Krist Novoselic of Nirvana first played together, they started a Creedence cover band. Grohl himself recently performed onstage with Fogerty.

"There's something about when you launch into the song 'Bad Moon [Rising]' in front of 4,000 people," Grohl says. "It doesn't matter if the guy has a mohawk, the guy has a mustache, the chick has a Madonna shirt — everybody loves Fogerty's music. Everybody."

Sitting in the Foo Fighters' studio in Los Angeles, Grohl says he's struck by how rock icons like Fogerty and Paul McCartney love to get heavy and weird. In fact, he says Fogerty's guitar is the loudest he's ever heard onstage.

"Now, I love Motorhead. I love AC/DC. But standing onstage next to John Fogerty's amp — like, it'll burn the hairs off your face," Grohl says. "He's not afraid. It's good."

Though Fogerty remains a rocker, his new album highlights his deep connections to country music; he's an obsessive student of country guitar techniques. A highlight of the album is "Hot Rod Heart" with Brad Paisley, whom Fogerty calls one of the greatest guitarists alive. At the end of the song, the two of them have a kind of guitar duel.

Paisley has been covering Fogerty's songs since he was a teenager. Speaking from his Nashville studio, Paisley says he'd love to pick Fogerty's brain about guitar tone but has never gotten the chance.

"He is such a student of guitar playing that I end up not being able to get a word in edgewise, because he just asks all these questions about guitar amps," Paisley says. "And it's like, shouldn't he be sitting back, coasting at this point? But he's not. He is more interested in learning than anyone I know that's my age or younger."

At Peace With The Past

Every morning, Fogerty spends several hours practicing guitar licks and scales — and he's writing. His new album features a couple of new songs that fit right in with the Creedence hits.

One sign of how Fogerty has reunited with his old songs can be seen in his family room, where gold and platinum records from Creedence are displayed alongside solo hits like "Centerfield."

"This is the first house that I've actually had my gold records up," Fogerty says. "This probably happened seven years ago. I'd kept them in boxes or in storage for the longest time."

The idea of displaying the gold records came from Fogerty's wife, Julie. She's also the one who suggested making an album that would revisit his old songs with other artists, and Fogerty credits her with helping him finally make peace with his past.

"I've become comfortable with what, in fact, happened, I guess. So I don't have a big personality hiccup when I come in this room anymore," he says. "Whereas I remember standing here the first time with Julie, and she's keeping moving so I won't be able to object, get a word in. She wants them up because I think, in her mind, she knows it's time."