Accessibility links
'Mr. Burns' And Friends, Surviving Long Past The End Times A smash hit in Washington, D.C., Anne Washburn's dark comedy looks forward nearly a century — past an apocalypse — to ask how we might remember, rebuild and renew our shared heritage. 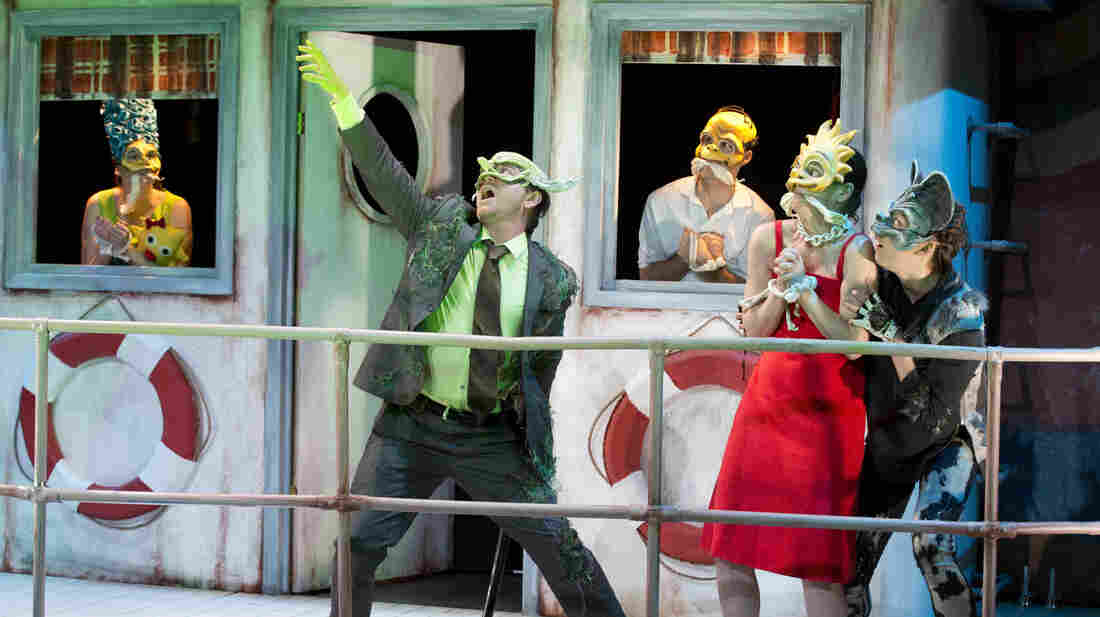 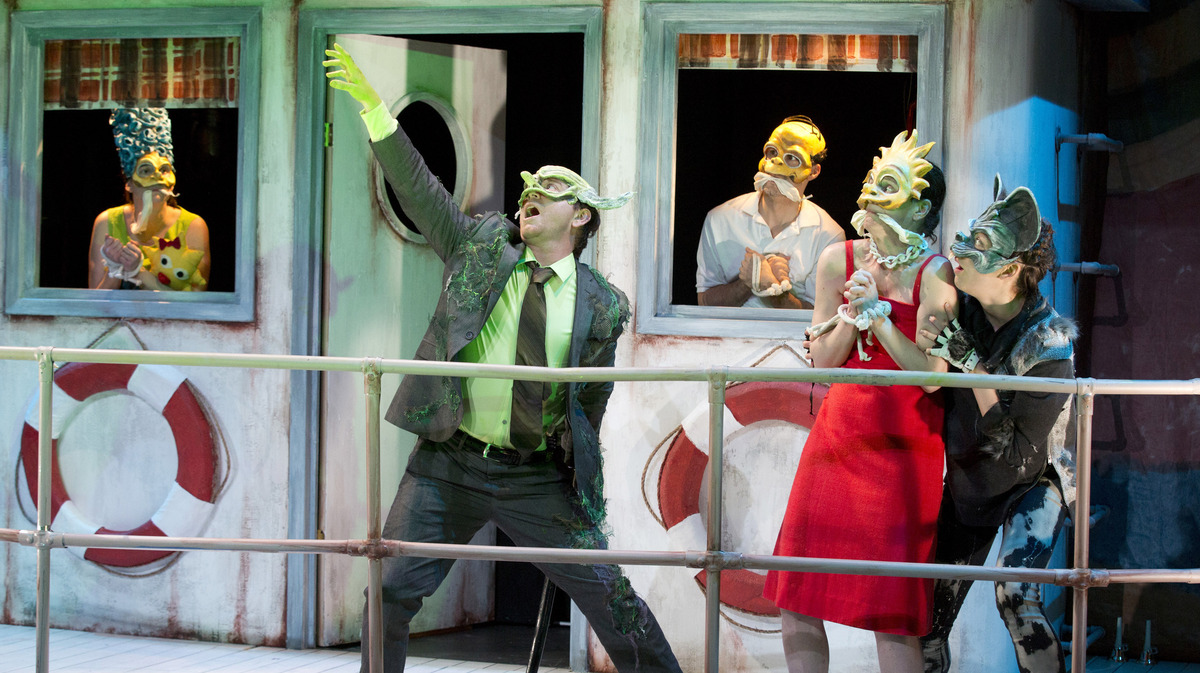 Who's That Masked Marge? Jennifer R. Morris (left), with Sam Breslin Wright, Gibson Frazier, Colleen Werthmann and Susannah Flood, in the third act of Mr. Burns: A Post-Electric Play, a Simpsons-inspired fantasia of loss and remembrance by Anne Washburn.

If the world as we know it comes to an end, will art survive? And if it does, what kinds of stories will be told after the apocalypse? The answer might surprise you.

The lights come up on a group of people around a campfire in the woods, trying to recall all the details of the hilarious Simpsons episode "Cape Feare," a parody of the Robert Mitchum and Robert De Niro movies, in which Bart Simpson is stalked by the evil but incompetent Sideshow Bob.

Then one member of the group hears a sound in the woods, and all of a sudden guns are drawn. Turns out something bad has happened. Something very, very bad: The electrical grid is down, nuclear plants are imploding, most of the population of the United States has been wiped out.

"I wanted to take a pop-culture narrative and push it past the apocalypse and see what happened," says Anne Washburn. She's the author of Mr. Burns: A Post-Electric Play, an audacious three-act drama that takes place in three different eras: right after the apocalypse, seven years after that, and 75 years further down the road. The show had its world premiere at Washington, D.C.'s Woolly Mammoth Theatre Company, a notable new-play incubator, and runs at New York's Playwrights Horizons through Oct. 6.

In each of its three acts, Washburn's survivors recount that Simpsons episode, which has become a symbol of all that has been lost and what hope may be found. And with each retelling, the story changes.

"I was thinking, 'What happens to the story? What's the game of telephone? What changes, and why does it change?,' " Washburn says. "That was the question. What version led to what version? And who are the people who change a version?" 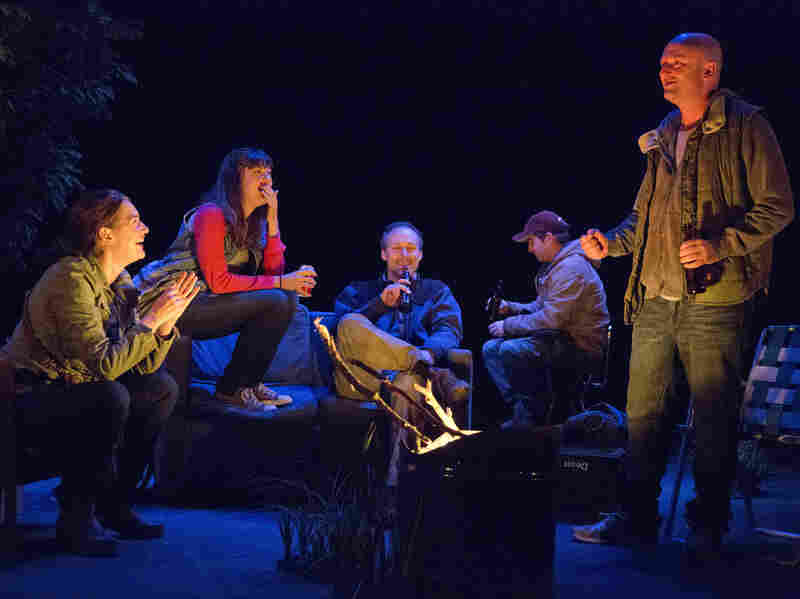 In Mr. Burns, the "Cape Feare" episode of The Simpsons morphs from a story shared 'round a campfire to include memories of a world-changing apocalypse — and over the years it becomes a shared cultural myth for surviving generations. Joan Marcus/Playwrights Horizons hide caption 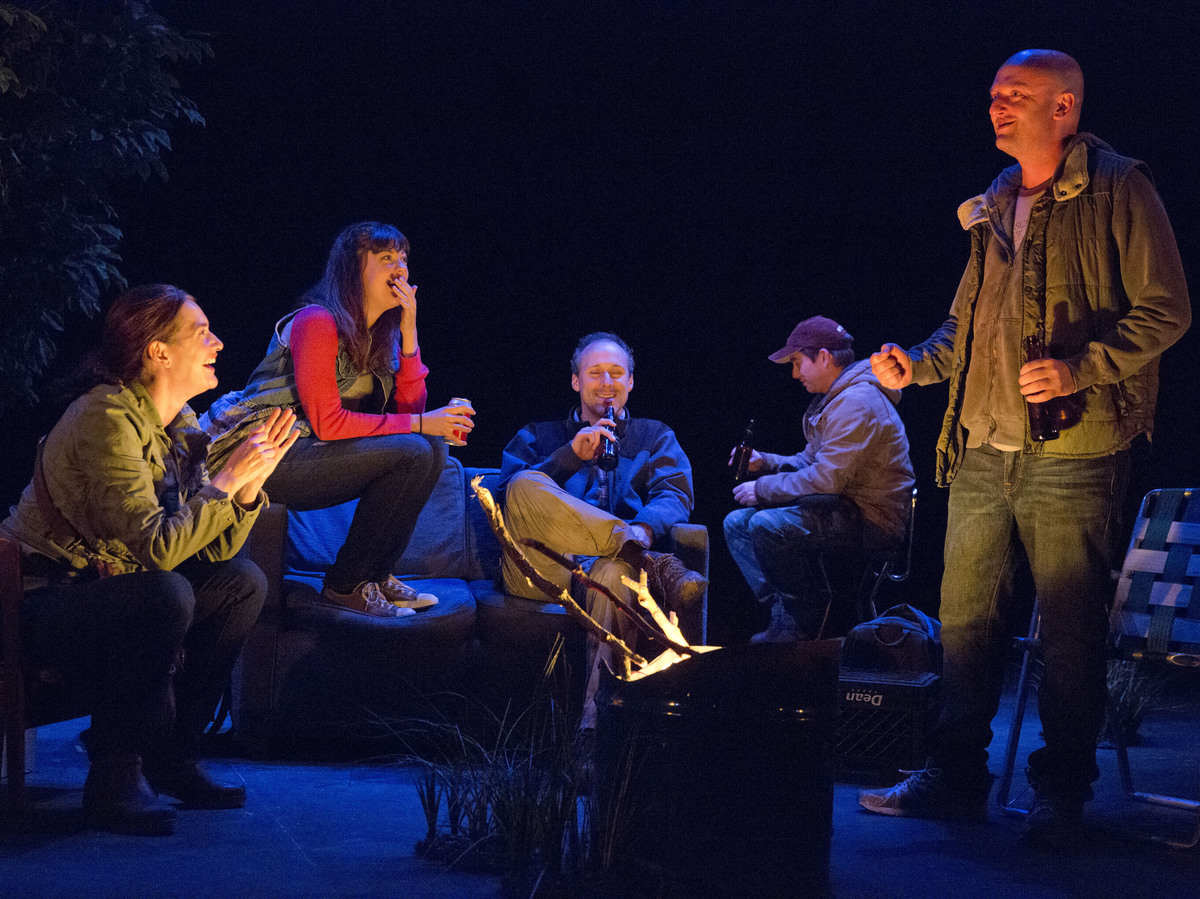 In Mr. Burns, the "Cape Feare" episode of The Simpsons morphs from a story shared 'round a campfire to include memories of a world-changing apocalypse — and over the years it becomes a shared cultural myth for surviving generations.

'People Would Want To Tell Stories'

In the first act, the strangers around the fire are just trying to hold onto their immediate past — in a world where there's now no electricity, never mind Google.

In the second act, these same strangers have formed a theater troupe that goes around the blighted, dangerous countryside, performing Simpsons episodes — complete with commercials — for other survivors. Show composer Michael Friedman says Washburn has gotten at something about the creative impulse.

Actor Colleen Werthmann says she and her cast mates are constantly negotiating a razor's edge between comedy and tragedy.

"The experience of performing inside this play is sort of like balancing on top of a scaffold over a giant chasm of grief that you never want to quite look all the way into," she says. "And it's also extremely joyful because, you know, as theater people who are making this play, the play ultimately is a real testament to the power of human storytelling."

A Culture 'Rebuilt From The Ashes'

The third act, which takes place 82 years after the apocalypse, is almost entirely musical — and highly stylized, delivered by actors playing Bart and Homer and Mr. Burns, not to mention Itchy and Scratchy, in masks.

"It's the music theater of the future," says composer Michael Friedman — "somewhere between a Passion play and a Greek drama and an operetta and a musical and a pop music concert."

And the story of that earthly apocalypse is woven, now, into the "Cape Feare" narrative.

"The cataclysm is still really fresh in everyone's mind because they've heard about it from someone who lived through it, but very few people are left who experienced it directly," writer Anne Washburn explains. "So at that point, you can take the same material and you can use it to speak more directly about what happened. You're still not telling the story realistically, but you're able to at least approach it allegorically or symbolically."

That journey — from tales around a campfire to a traveling theater troupe to a formal theatrical performance — comprises a kind of history of the future, says director Steve Cosson.

And it all starts, strangely enough, with The Simpsons.