Accessibility links
What It's Like Living In A Bankrupt City Before Detroit, the city of Stockton, Calif., suffered the biggest municipal bankruptcy in U.S. history. The city's biggest challenge now is convincing voters they need to pay higher taxes before things get worse. 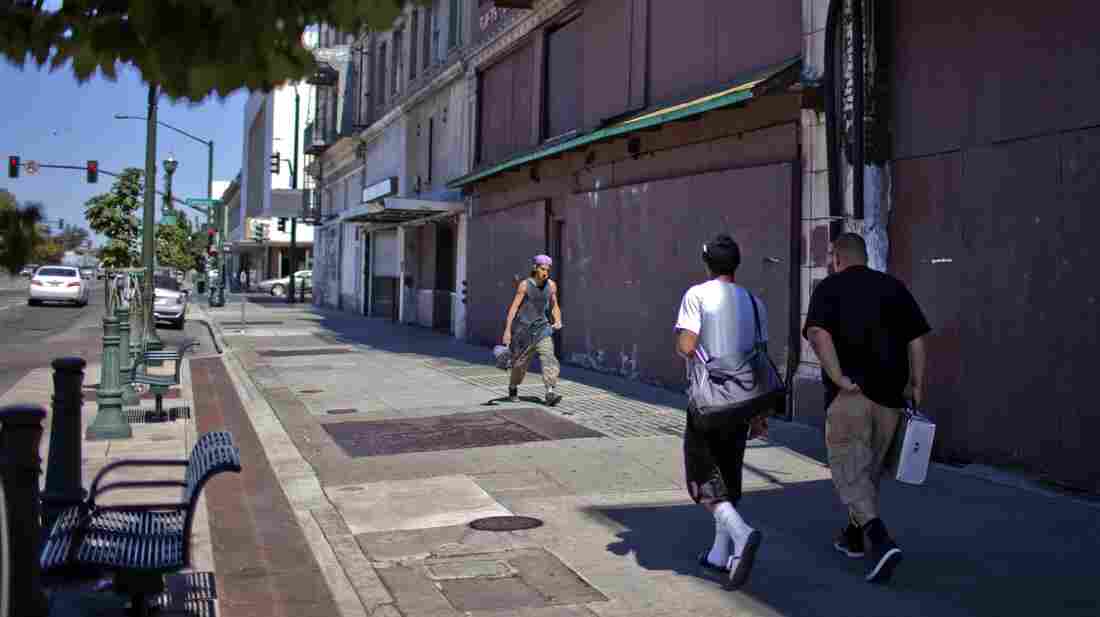 Some of the many boarded up store fronts along Weber Street in Stockton, Calif., in 2012. The Stockton City Council voted to declare bankruptcy last year, making it the largest city in U.S. history to enter Chapter 9 to that time. Peter DaSilva/EPA /Landov hide caption 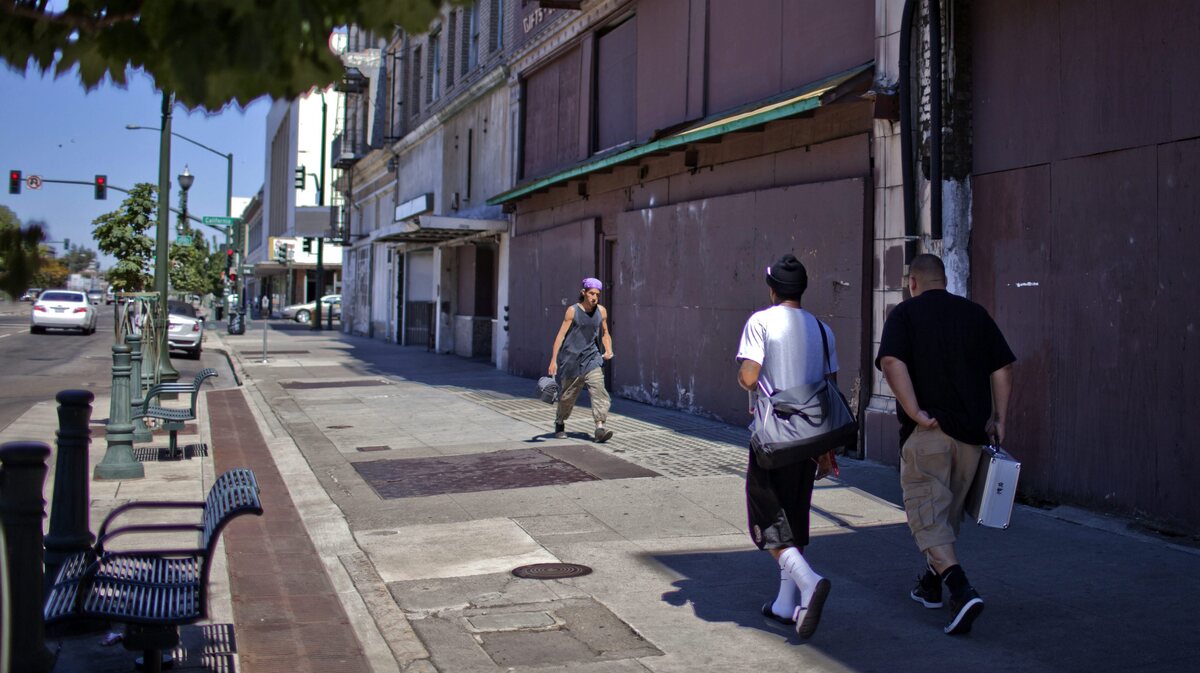 Some of the many boarded up store fronts along Weber Street in Stockton, Calif., in 2012. The Stockton City Council voted to declare bankruptcy last year, making it the largest city in U.S. history to enter Chapter 9 to that time.

Crime has been bad on the south side of Stockton. Katherine Anderson, a lifelong resident of the Northern California city, says she's almost gotten used to hearing shots fired in her neighborhood.

Stockton has long had a problem with drugs. But there's been more crime because Stockton is broke.

Until Detroit's recent filing, Stockton's bankruptcy was the largest in U.S. history. Given widespread police layoffs and retirements, the city's gang intervention and narcotics teams have both closed shop. The result was a murder rate that last year broke all local records.

Anderson called the police recently after a boy was shot riding his bike down the alley that runs alongside her home. It took them four hours to show up.

"He was dead by the time they got here," she says. "There's more crime around here — a lot."

Stockton has sought to fight back. Working closely with the state highway patrol and county sheriff, Stockton has fashioned a "Marshall Plan" for crime. Thanks to stepped-up policing, the murder rate came down 63 percent in the first half of the year.

No one is declaring victory. Stockton is the second-most dangerous city in California, according to FBI statistics.

"There are still an unacceptable number of hours in a day when police will only respond to crimes in progress," says Bob Deis, the city manager.

But problems with crime and city finances aren't as bad as they were. Stockton intends to present a federal judge with its plan to get out of bankruptcy as early as this month.

There's no guarantee the city will meet with success. It continues to face legal challenges and one incredibly steep political hurdle: Convincing residents who have not been getting much by way of government services that they should start paying higher taxes. 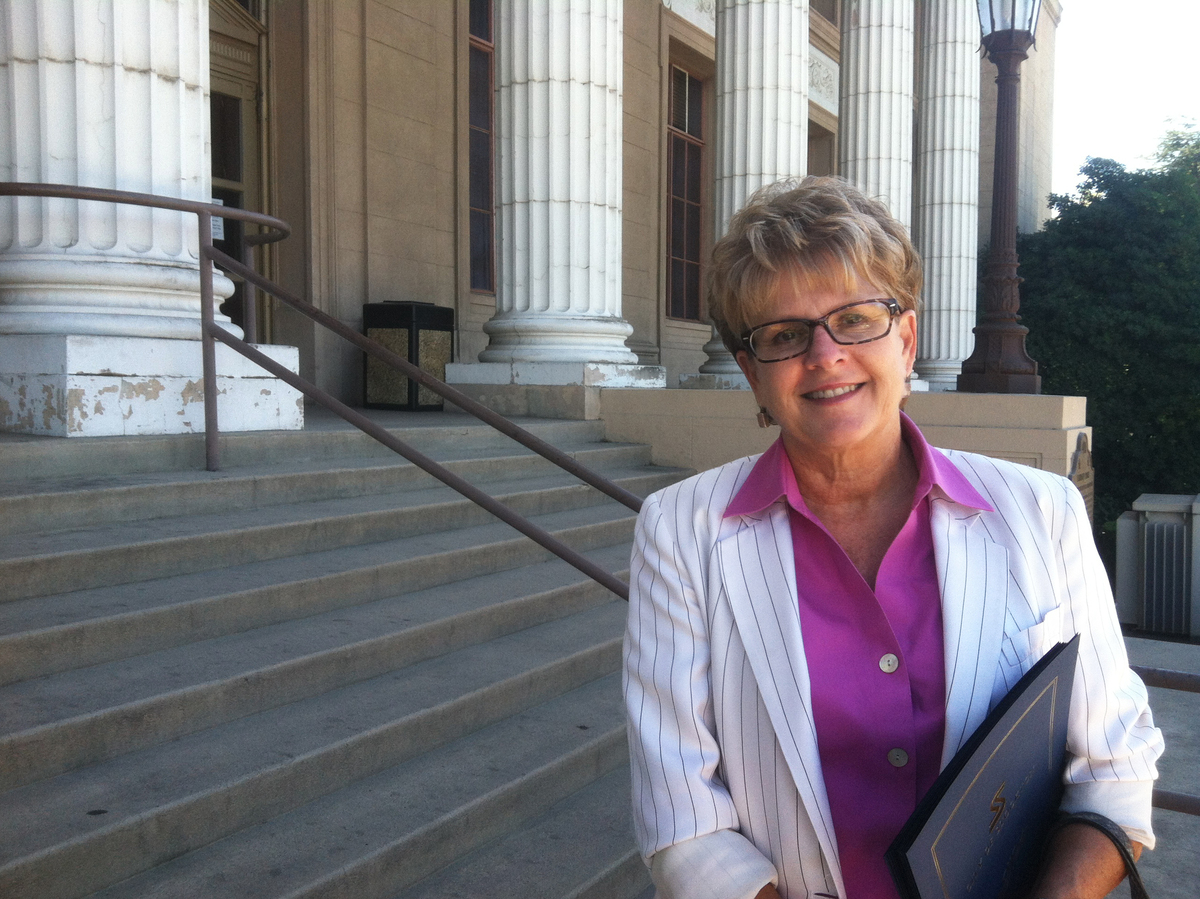 Councilwoman Katherine Miller believes Stockton is through the worst of its financial troubles.

In November, Stockton voters will have to decide whether to raise the sales tax by three-quarters of a penny, from 8.25 to 9 percent, which would raise roughly $30 million a year.

"If we can get the tax measure passed — and that's a big if — Stockton will be well on its way to recovery," says Katherine Miller, a member of the city council. "We won't be rolling in dough or anything, but we'll be through the crisis."

Most of the money would be devoted to hiring cops, but a portion would be used to pay down debt.

Pete Beltran is having none of it.

"The tax is too high," says Beltran, a longtime resident who has been looking for part-time work. "Raising it, no, I don't think it will help."

Sitting in McKinley Park on Stockton's south side, Beltran points out many of the city's problems. A nearby industrial park has emptied out, the jobs gone elsewhere.

In the park itself, the water in the swimming pool has turned a sludgy shade of pine green. "It's never been changed for, like, three years," Beltran says.

There's no question services have suffered as a result of budget cuts. Due to furloughs, city offices are closed every other Friday. Library hours are shorter and recreation programs for kids and seniors alike have been slashed.

But if the tax measure fails, Miller warns, cuts will grow more drastic. Parks and libraries would be shut altogether. The fire department budget, already reduced 37 percent, would be cut an additional 14 percent.

"In our case, you can't cut any more and be a viable city," says Deis, the city manager.

The Circus At City Hall

How Do You Photograph A City's Bankruptcy?

Stockton voters have already expressed their anger over the city's austerity measures. Last fall, they booted out every city council member who was on the ballot, except Miller.

They elected a new mayor, Anthony Silva, who quickly proved embarrassing. He said he had secretly recorded conversations with Deis and feuded publicly with members of the council. Silva has come under criminal investigation, although prosecutors refuse to specify the potential charges.

As recently as July, there was talk of a recall campaign. Silva has since kept a low profile.

"It was a huge distraction," Miller says. "It weakened our credibility with the public."

There's no doubt about that. "Our mayor has been a divisive figure," says Kathi Duffel, an English teacher who has come downtown for jury duty. "The city's in disarray at this point."

As a result, she says, she'll be voting against the proposed tax increase. 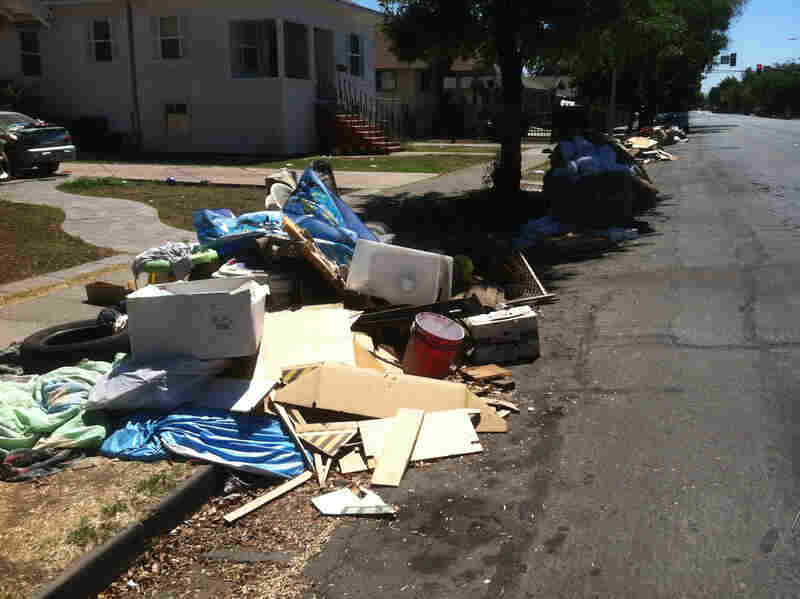 Along California Street, residents complain that piles of trash have been sitting uncollected for the better part of two weeks. Alan Greenblatt/NPR hide caption 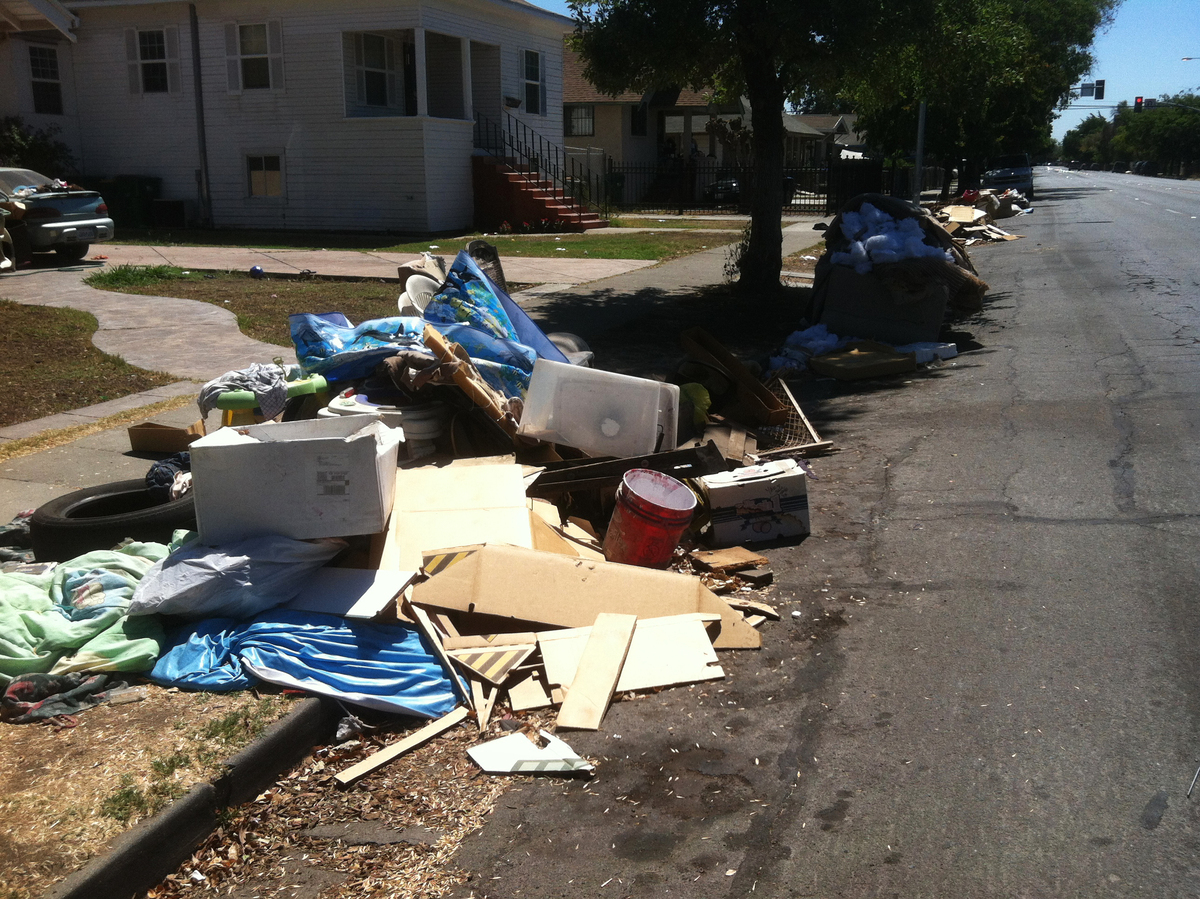 Along California Street, residents complain that piles of trash have been sitting uncollected for the better part of two weeks.

City officials recognize they have a long way to go to win back the trust of the public. Prior generations of leaders banked on growth that never happened, spending big dollars on waterfront and downtown developments and offering unaffordably generous compensation packages to city workers.

"Two years ago, three years ago, the city was not deserving of additional resources," says Deis, the city manager. "Unfortunately, we had to fix 15 to 20 years of mismanagement in a year or two."

It could be a tough sell. The city has eliminated retirement health benefits for its workers, saving about $1 billion over the next 30 years. But the city still faces pension debt of up to $332 million.

It's been years since city workers have seen a raise and their retirement packages have already been cut at least 30 percent with the loss of health benefits, Deis says. Stockton can't attract or retain workers if pensions go, too. (Since 2009, the city has reduced its workforce, outside the public safety functions, by 42 percent.)

"The city has indicated they will not impair the pensions, although the judge has told them he might not be able to approve a plan that doesn't do that," Sweet says. "He said the day of reckoning will come on these issues."

Rising From The Bottom

Despite all this — despite the legal wrangling in bankruptcy court and the fight over taxes and the political food-fighting at City Hall — Stockton is actually doing better than it was not so long ago.

Parts of the city have always remained pleasant and prosperous. But even in the troubled parts of town, things aren't slipping out of control, the way they seemed to be doing leading up to the bankruptcy.

With California's housing market heating up, the foreclosure rate — a major factor in Stockton's fall — is now below the national average.

There's more of a visible law enforcement presence, thanks to other governments, if not any more police. A dozen city parks have been adopted by their neighborhoods or nonprofit groups and are getting some much-needed maintenance.

"The city seems to be flourishing, more than before they declared bankruptcy," says Gwen Davis, a Stockton resident looking for work in medical billing. "As a matter of fact, it seems like there's more police."

How To Avoid Landmines

If Stockton can get its plan approved, it will have emerged out of bankruptcy in well under two years — a much faster turnaround than happened in nearby Vallejo, which faced a much smaller set of financial problems when it went bust in 2008.

Miller, the city councilwoman, says that people in Detroit and other cities in crisis will be pointing to Stockton and saying, "That's how you do it."

She may be right. Stockton's choices were all terrible, but city officials owned up to the mistakes of the past and made the difficult choices needed to chart a sustainable course.

They may not get there. The fiscal plan will have to be torn up if voters aren't convinced the city deserves more of their money.

But regardless of how the tax measure plays out, the type of waste that long typified Stockton's spending habits appears to be a thing of the past.

"Believe it or not, this is now one of the more fiscally savvy cities in the state," says Michael Fitzgerald, a columnist with the Stockton Record. "We've all read the big boring book of bonds to avoid stepping on any more landmines."