Accessibility links
New School Year Brings Sequestration Pain For Many Districts As the nation's public schools reopen this fall, many are facing budget deficits and scarce money due to sequestration. Experts say districts with large numbers of poor students are hit the hardest. 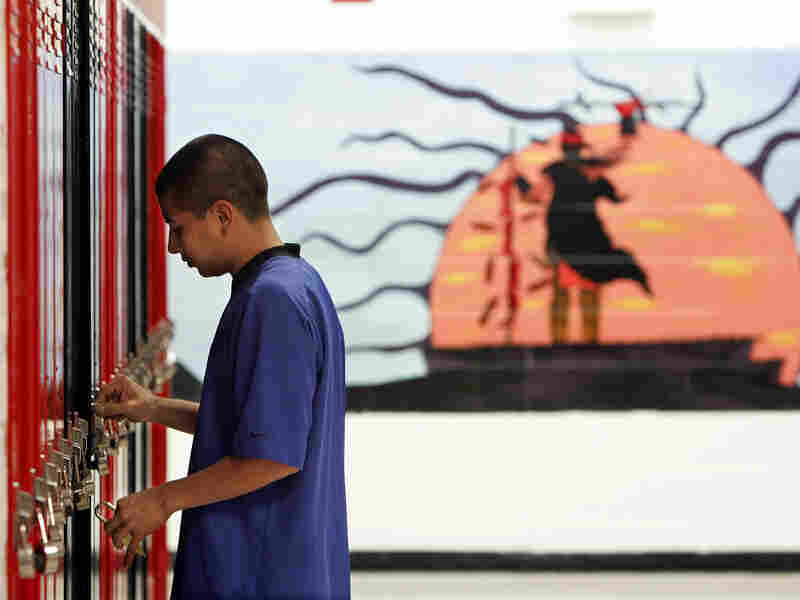 A student at Red Lake High School starts the 2005 school year following a shooting the year before in which eight people were killed. Because of sequestration, the district is not able to keep on staff a school psychologist brought in after the shootings. Ann Heisenfelt/AP hide caption 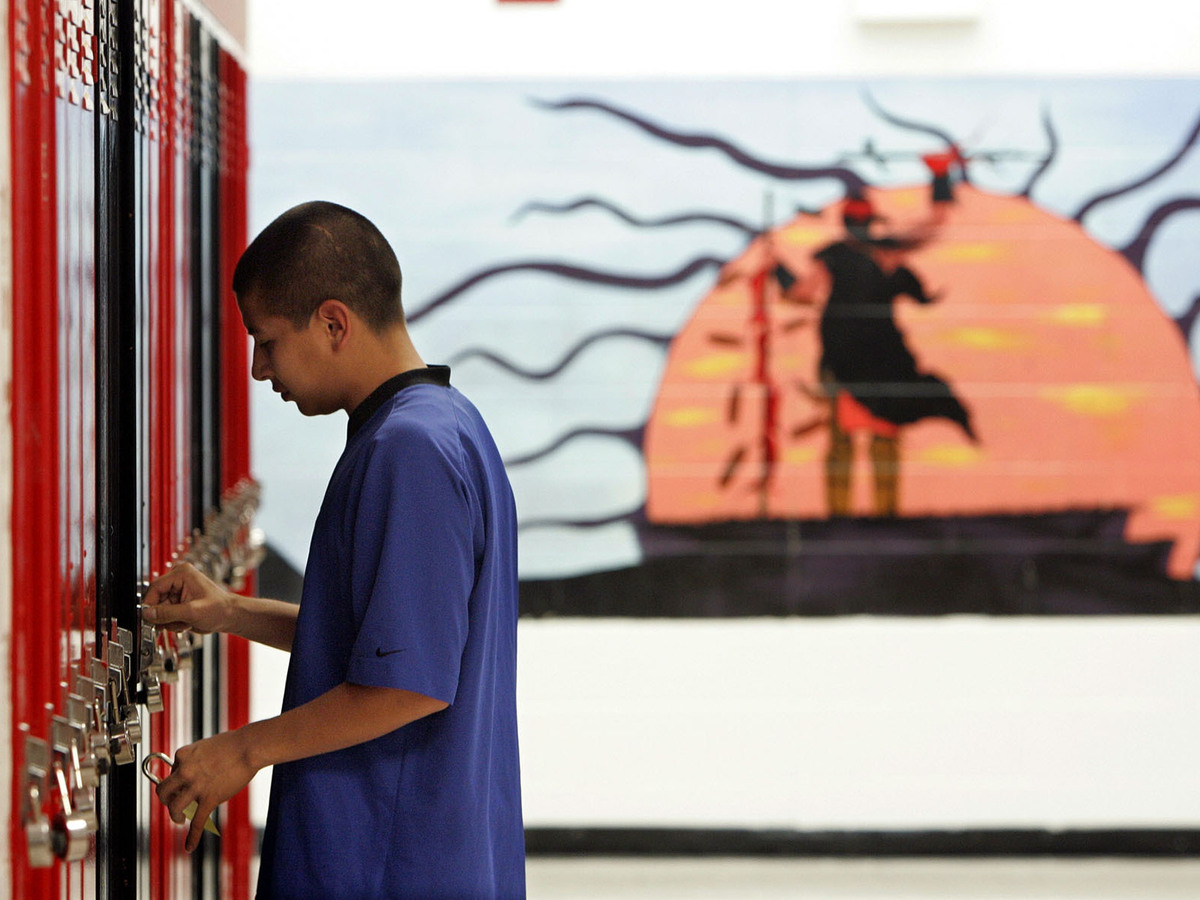 A student at Red Lake High School starts the 2005 school year following a shooting the year before in which eight people were killed. Because of sequestration, the district is not able to keep on staff a school psychologist brought in after the shootings.

The superintendent of the Lancaster, Pa., school district is meeting with teachers and staff at George Washington Elementary. It's the start of a new school year, and he's trying to sound upbeat about the district's finances.

"We continue to lose 5 and 10 percent of budgets each year," Pedro Rivera tells them. "And our overall goal is to make those plans and stretch out dollars to not impact you, because no kids should go without. Right?"

Applause is polite but scattered, and Rivera's question hangs in the air. Employees here know the superintendent can't protect kids from the cuts the district is having to make.

Lancaster is one of many districts starting the school year hit hard by the $3 billion cut from federal education funds due to sequestration. Many school districts, particularly in poor areas where schools rely more heavily on federal funding, are starting the year with bare-bones budgets and lots of uncertainty.

"I can no longer promise them, because the truth of the matter is, it is now impacting classroom instruction," Rivera says.

Sequestration, On Top Of More Cuts

Rivera isn't laying off any teachers this fall, but the district is down 110 teachers. Many have retired early and there's a hiring freeze, so classroom size has jumped to 30 kids or more per class in the early grades.

Sequestration has hit Lancaster hard; 20 percent of the money the city spends on schools comes from Washington. That's for special education, for low-income children, even for fixing up the district's old, dilapidated school buildings.

That's on top of the 10- to 15-percent reduction in state funding, leaving the district $5.5 million in the hole.

Pennsylvania government officials say the state will lose $33 million to sequestration. The hardest-hit states, California and Texas, will lose about two to three times more.

Schools on military bases or Indian reservations face even deeper cuts. They are on non-taxable government land, so they get no local property tax revenue and must rely heavily on federal aid.

At the Red Lake Independent School District, on an Indian reservation in Red Lake, Minn., board member Roy Nelson figures the district is confronting a $1.6 million cut in federal funds.

"We have closed nine positions, which is seven teachers — oh, wait a minute, 10 positions — and three paraprofessionals," Nelson says. "[Those] cuts will really hurt."

Nelson says federal funds account for just under half of his district's budget, a huge amount for a tiny district with fewer than 1,400 kids.

The toughest decision, says Nelson, was not being able to rehire a much-needed school psychologist. A few years ago, Red Lake Senior High was the site of a school shooting that left 10 people dead, including the shooter, an emotionally disturbed 16-year-old.

"After the shooting, Indian Health Services asked what could've been done to avert the shooting," Nelson says. "A psychologist would have helped. And to this day, parents are concerned about children's safety. I feel the same way."

Not everybody is hurting, says Michael Griffith, a school finance expert. He says many districts don't rely as heavily on federal dollars, so the 5 percent cut required by sequestration hasn't hit them as hard.

"For instance, if you only get 2 percent of your funding from the feds and you cut that by 5 percent, that's only one-tenth of 1 percent you're losing from your budget," he says. "The sky is not falling for everyone with this kind of cut."

In a study for the nonpartisan Education Commission of the States, Griffith found that the deepest, most painful cuts have been limited to school districts serving large numbers of children living in poverty.

The good news, Griffith says, is that state education budgets are improving, which should help make up for the short-term losses in federal aid.

But, in the long term, he adds, "there should be concern that the 5 percent cut will be institutionalized."

That worries Lancaster's Rivera. He says that if sequestration cuts become permanent, other services that poor students and families have come to rely on, such as a health clinic at George Washington Elementary, will suffer.

"We're the health care provider," Rivera says. "We also teach GED and English language courses to adults in this building."

Rivera says all of this could shut down if lawmakers in Washington don't end sequestration.

It's demoralizing, he says, "to hear your country's leaders saying, 'We can't figure it out,' and kind of quit."