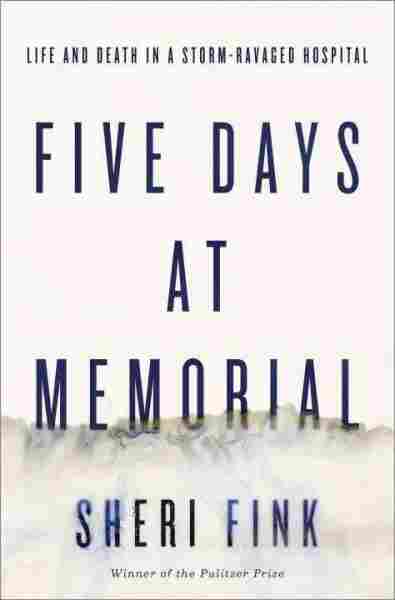 Life and Death in a Storm-Ravaged Hospital

If we didn't experience Hurricane Katrina ourselves, we saw it: the ominous red pinwheel on the radar, the wrecked Superdome, the corpses. And certainly we saw our shame — America's inequality, negligence and violence were all laid bare by the storm.

But one tragedy went largely unwitnessed. And this is the subject of Sheri Fink's provocative new book, Five Days at Memorial: Life and Death in a Storm-Ravaged Hospital. The Pulitzer Prize-winning writer examines what happens when people make life-and-death decisions in a state of anarchy.

On Aug. 29, 2005, Hurricane Katrina made landfall as a Category 3 storm. The windows at New Orleans' Memorial Medical Center shattered. But the facility itself remained functional. The staff exhaled. Wow. "We dodged a bullet," they said.

Then the levees broke. Memorial's back-up generators were located at ground level.

As floodwaters poured into the streets, the building was plunged into darkness. Life-support systems shut down; temperatures rose; food and medicine dwindled. Gunfire could be heard outside. Tenet, the corporation that owned the hospital, had no evacuation plan. Hospital staff repeatedly sent desperate emails: "WE NEED PATIENTS OUT OF HERE NOW!" "Please can you take patients." "Is anyone out there?"

When the answer finally came, it read: "We have been told getting into the city is not going to happen. Have you contacted the National Guard?"

Some staffers became convinced that the most critical patients would not survive. One of these believers was Dr. John Thiele. Fink writes, "[Thiele] had no time to provide what he considered appropriate end-of-life care ... He could not justify hanging a morphine drip and praying it didn't run out ..."

And so Dr. Thiele assisted another doctor, Anna Pou, and several nurses, doing what they believed was the only ethical thing left. They injected the most critically ill patients with lethal doses of morphine and sedative.

Eleven months later, as New Orleans staggered back to life, Dr. Pou and two nurses were arrested and charged with "principal to second-degree murder."

The public was largely outraged over the arrests. It was the Tenet corporation, the government and overall leadership that should have been put on trial.

But Five Days at Memorial is more nuanced in its judgment. Fink describes not only the exhausted, dedicated medical staff, but also the once-vibrant and beloved patients who died in their care. Yet she refuses to weave all the threads of her story into one neat polemic — which is sometimes as frustrating as it is admirable. If she lays blame anywhere, it's on the for-profit health care company.

Five Days at Memorial may be fair and balanced to a fault, for ultimately, it provokes more debate than it answers. The book is neither definitive nor palliative. Perhaps, Fink is suggesting, nothing is — or should be.