Accessibility links
First Listen: Elvis Costello & The Roots, 'Wise Up Ghost' Recorded in a year's worth of experimental sessions, Wise Up Ghost sounds like the best of Costello's stuff, and like nothing he's done before. Working with musicians who've figured out how to apply hip-hop principles to a band dynamic, Costello locates himself within that framework to produce some of the most focused and visionary work of his later career. 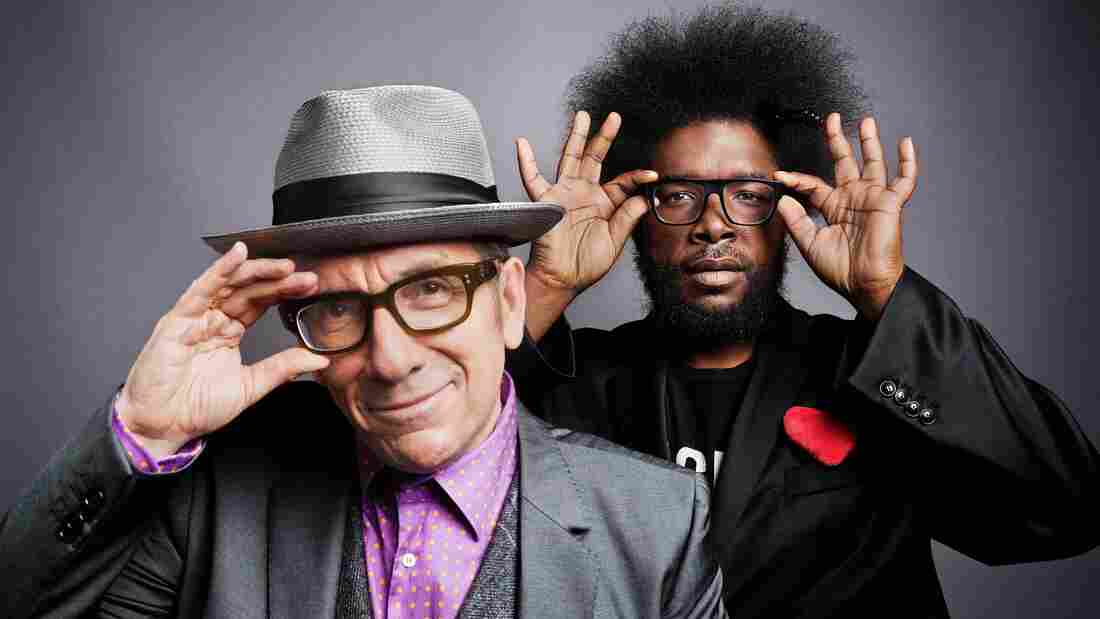 Elvis Costello and The Roots' new album, Wise Up Ghost, comes out Sept. 17. Danny Clinch/Courtesy of the artist hide caption 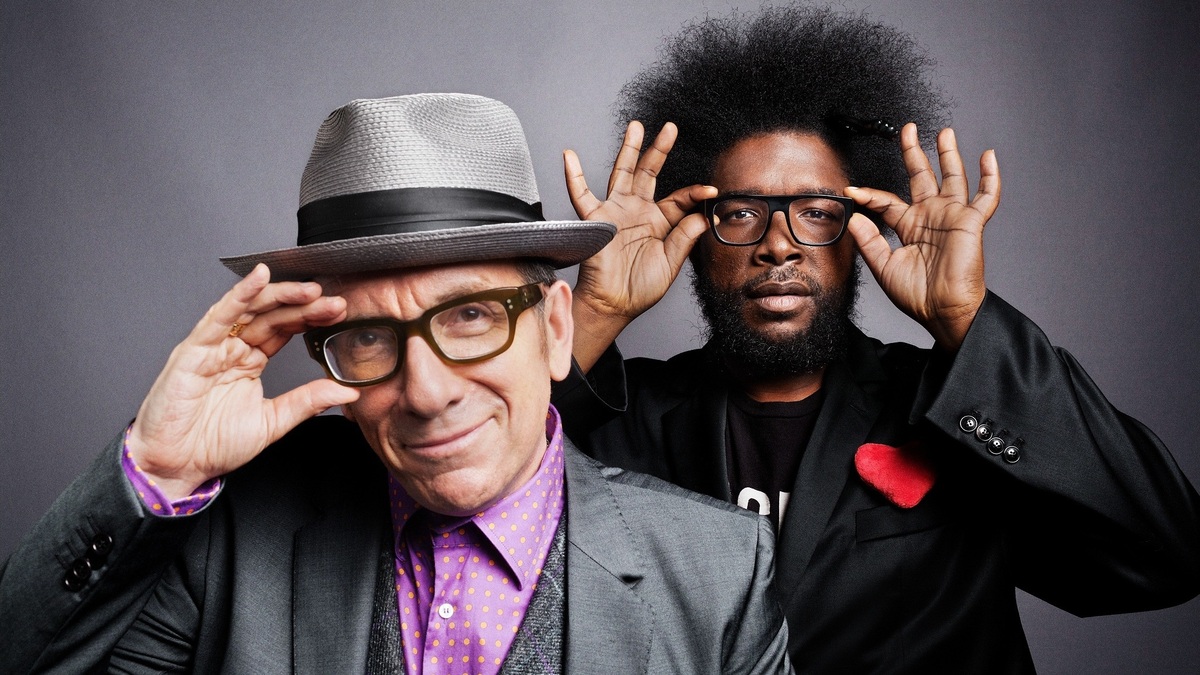 Elvis Costello and The Roots' new album, Wise Up Ghost, comes out Sept. 17.

The new documentary Muscle Shoals recalls how interracial harmony in tumultuous times made possible a new kind of music. Leading African-American artists traveled to North Alabama — not exactly a place they thought they'd be welcome in the civil rights era — to jam with an all-white crew of session players. In little rooms near the wide Tennessee River, they perfected soul and anticipated Southern rock. (Muscle Shoals reveals how Duane Allman and Wilson Pickett invented that style, covering "Hey Jude.") The English rock eminence Elvis Costello has long admired the Muscle Shoals, Ala., sound, the influence of which shows up in his more soulful efforts. But it took a Philly group shacking up in New York to help him work the Muscle Shoals magic in reverse.

Out Sept. 17, Wise Up Ghost is Costello's collaboration with The Roots, hip-hop's most admired live act and a recording venture as conceptually adventurous as Costello himself. Recorded in a year's worth of experimental sessions after the 59-year-old bard met the band as a guest in its television home, Late Night With Jimmy Fallon, the album sounds like the best of Costello's stuff and like nothing he's done before. Working with musicians who've figured out how to apply hip-hop principles to a band dynamic, Costello locates himself within that framework to produce some of the most focused and visionary work of his later career.

Though it's not a concept album (that's Undun, the 2011 Roots album it sometimes brings to mind), Wise Up Ghost has a unifying theme: trouble, as it bubbles up inside bedrooms, snakes through the halls of power and festers on the streets. This is sexy music about scary topics like the abuse of power and the manipulation of desire. Is the woman in "(She Might Be a) Grenade" a lover or a spy? Does the spent prophet singing the title track warn of hardening hearts or of a creeping totalitarian threat? It's both, throughout these songs, each examining the individual betrayals and dashed ideals that contribute to a culture's demise. "Cinco Minutos Con Vos," a duet with the dazzling La Marisoul of the L.A. band La Santa Cecilia, comes on like a Joan Didion novel, humid with the mist of terror. "Come the Meantimes" glances sidelong at apocalypse in ways Curtis Mayfield would have appreciated. Throughout the album, Costello also samples from his own earlier songs; that literary touch recalls the self-referential mirror games of writers like Jorge Luis Borges, even as it nods to the wordplay of rappers like the one absent Roots member, Black Thought.

The sound of Wise Up Ghost comes closer to the early-'70s cinematic funk of Curtis Mayfield and Isaac Hayes than to anything else. Strings swell and horns punch, but everything stays true to the rhythm ?uestlove, percussionist Frank Knuckles and bassist Mark Kelley lay down. Co-producer Steven Mandel's mix opens up the songs' complex arrangements so that little details — bells tinkling, a murmured aside — widen every scene. Listening, it's hard to separate oneself from these dreamy nightmares.

What spiritually ties Wise Up Ghost to Muscle Shoals, in the end, isn't the sound so much as the spirit of musicians walking toward each other past categories of all kinds, and together renewing their own spirits as well as the musical forms they've explored. It's impressive for a project everybody involved made just for fun. But sometimes fun is the best route into some pretty powerful stuff.