Accessibility links
U.S. Mulls Over More Possible Targets For Syria Strike The Pentagon has been focusing on the Syrian military's command-and-control sites, which remain the most likely focus of any U.S. strike. But military planners have begun to add new targets, such as mobile missile launchers, that could require more than cruise missiles — and make the mission more complicated. 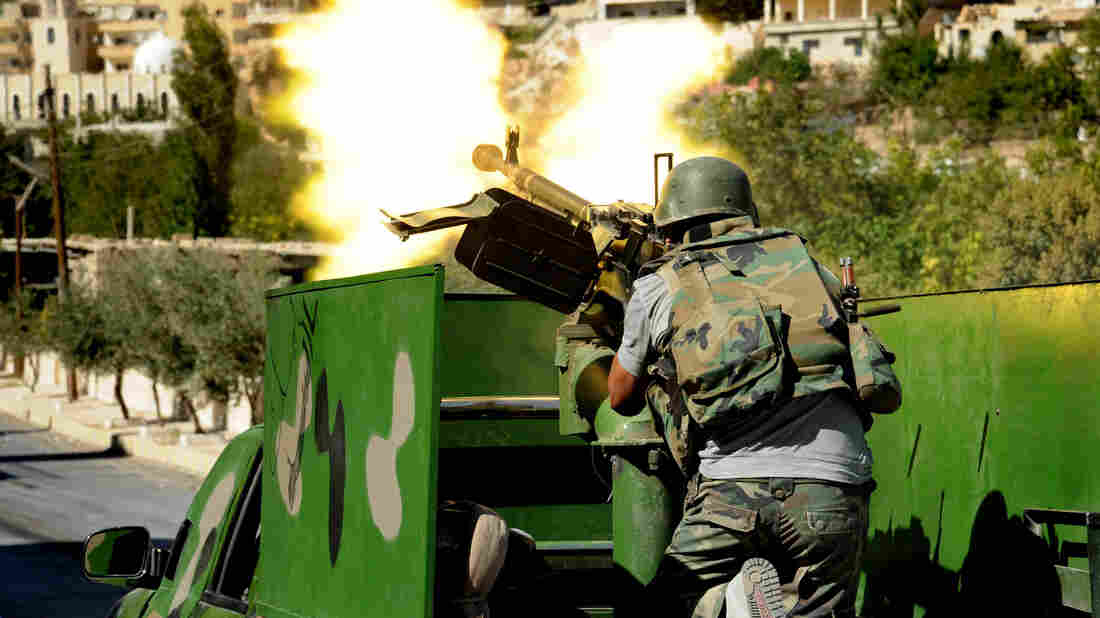 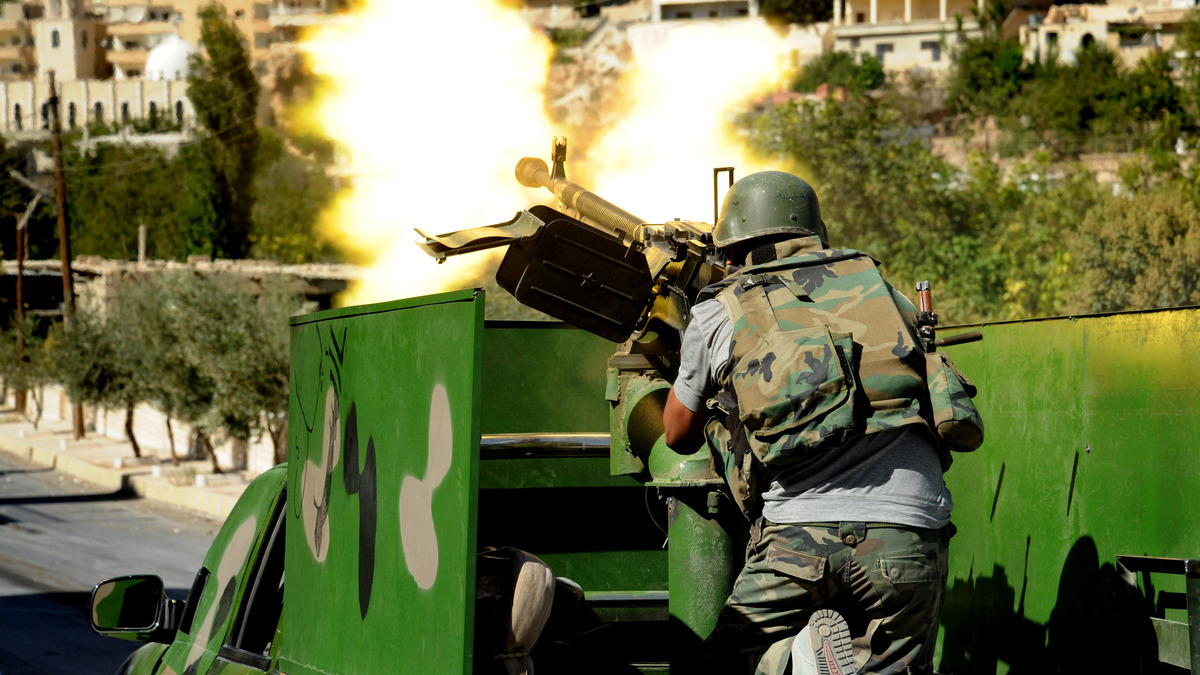 A Syrian solider fires a heavy machine gun during clashes with rebels in Maaloula village, northeast of Syria's capital, Damascus, on Saturday.

As U.S. lawmakers weigh whether to support an attack on the regime of Syrian President Bashar Assad, military planners have expanded the target list for a potential strike.

The Pentagon had been focused on attacking Syria with so-called standoff weapons — cruise missiles, for example. Launched from ships, they can attack Syrian positions without placing American pilots in danger. Cruise missiles are very precise, and perfect for hitting fixed targets, such as command-and-control centers the Syrian military relies on.

Hitting those targets is still the best way to deter the use of chemical weapons and to weaken the Syrian military in general, says Anthony Cordesman of the Center for Strategic and International Studies.

"If you take out command-and-control facilities, you weaken every aspect of the operation," Cordesman says.

Since that initial target list was drawn up, the Pentagon has broadened it. In part, that's a response to Congress. The language of a measure moving through the Senate now says it is U.S. policy to "change the momentum" on the battlefield in Syria, to create favorable conditions for a negotiated settlement that ends the conflict. As a result, U.S. planners might add the regime's arsenal of missile sites, many on mobile launchers. 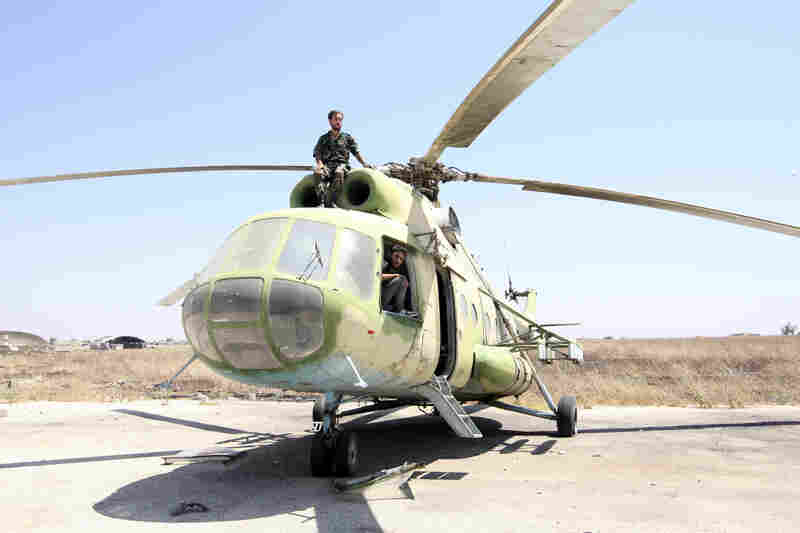 The U.S. is considering adding helicopters to its list of potential targets of a military strike. Here, rebel fighters are seen on a Russian-made helicopter seized from the Syrian army at the Minnig Military Airport near the Turkish border on Aug. 11. Mahmoud Hassano /Reuters/Landov hide caption 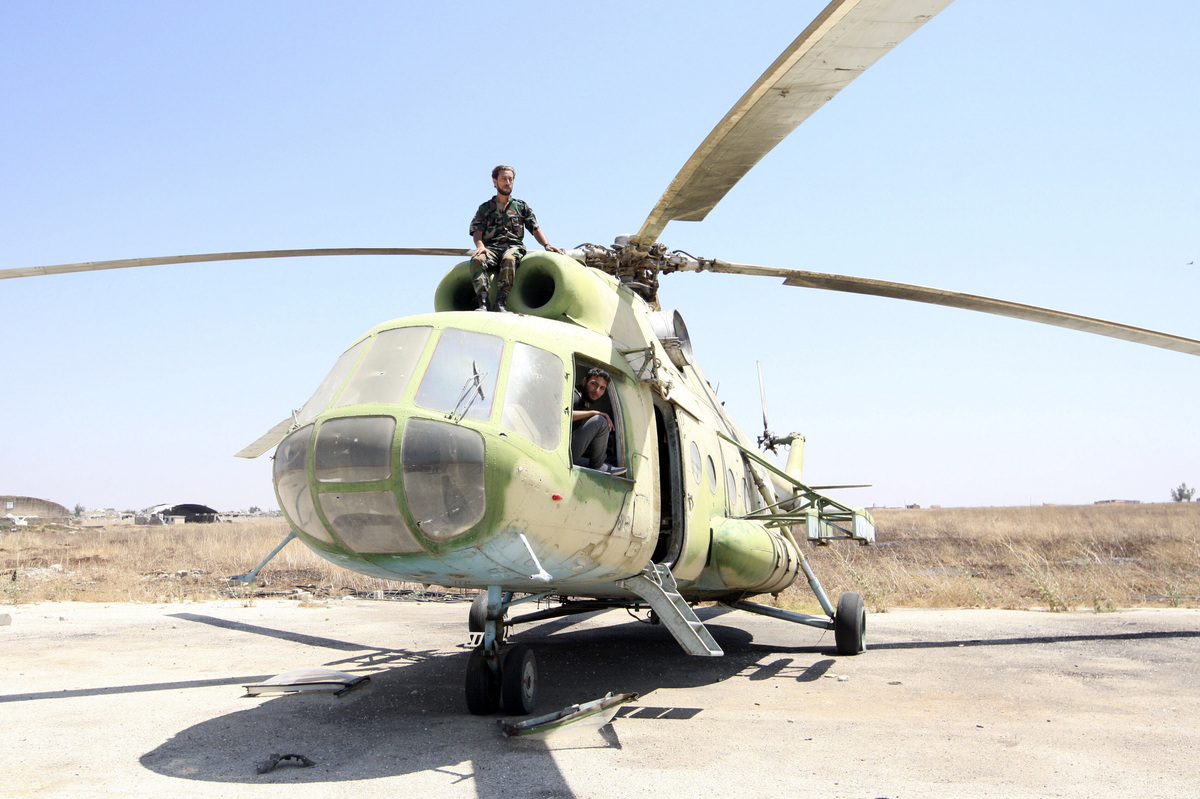 The U.S. is considering adding helicopters to its list of potential targets of a military strike. Here, rebel fighters are seen on a Russian-made helicopter seized from the Syrian army at the Minnig Military Airport near the Turkish border on Aug. 11.

That won't be easy: The Syrian military has had plenty of time to move those assets around. Trying to take out those weapons creates two problems, says Jeremy Binney of Jane's Defence Weekly.

"Keeping track of all those can be challenging for an intelligence point of view," he says. "But also if they move them into civilian areas, there's going to be that risk of collateral damage."

But the military also may add targets that, in addition to weakening Assad, will strengthen the rebels. Binney says Pentagon planners may well decide to take out Syria's military helicopter fleet.

"That would really limit their ability to keep resupplying some of these garrisons that are under siege, especially up in the north," Binney says. "Part of the battle has been a Syrian strategy to keep these outposts resupplied."

But in this limited strike, expanding the list of targets probably won't be enough to tip the balance in favor of the rebels, according to Cordesman. He believes the intervention might move to a second phase.

"The follow-up to cruise missile strikes may well be more money, more weapons, different types of weapons to the rebels, with a real focus only on the moderate rebel groups," Cordesman says.

The Precedent In Iraq

The U.S. has been trying to get weapons to the rebels for months, with little success.

Relying on a rebel army is one option the U.S. did not have during the last confrontation over chemical weapons: In 1998, the U.S. launched Operation Desert Fox after Iraqi President Saddam Hussein refused to let the United Nations inspect suspected chemical weapons sites.

The mission was similar: The U.S. used cruise missiles and bombing raids with the aim of deterring and degrading Saddam's ability to use weapons of mass destruction.

Then, as now, it's difficult to define success for that kind of military mission, says Mark Conversino of the Air War College.

"Degrading is a pretty elastic term, and even after a handful of pretty successful sorties, you can say, 'Well, we've degraded that,' " he says.

By many measures, Conversino says, Desert Fox did erode Saddam's military capabilities. Nevertheless, five years later, he was still in power, and the U.S. launched a full-scale invasion to finish the job.