Accessibility links
Dust Bowl Worries Swirl Up As Shelterbelt Buckles When the swirling, howling winds of the 1930s Dust Bowl gobbled up farmland from Texas to the Dakotas, the federal government planted 100 million trees to act like a giant windbreak. It worked. But now, after years of drought, those old trees are dying. 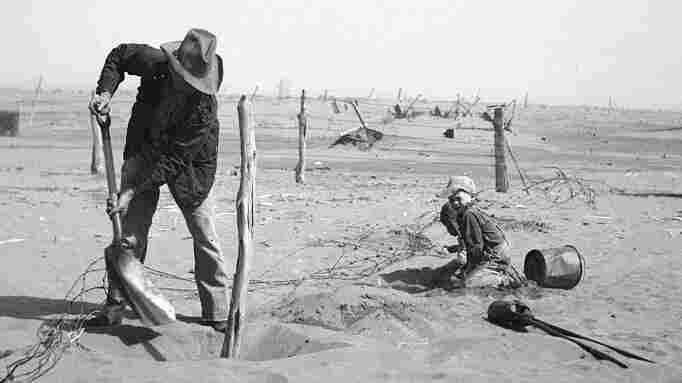 A Dust Bowl farmer digs out a fence post to keep it from being buried under drifting sand in Cimarron County, Okla., in 1936. Arthur Rothstein/Library of Congress hide caption 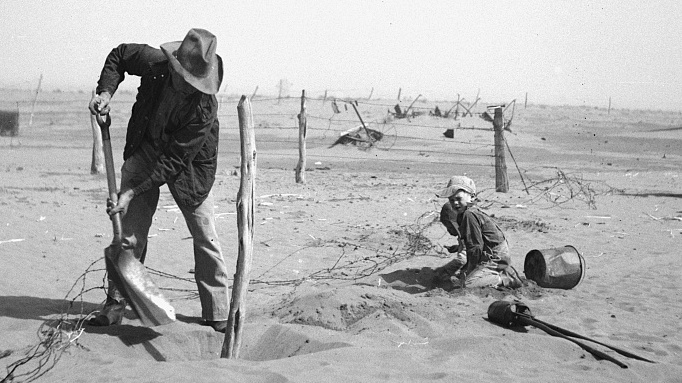 A Dust Bowl farmer digs out a fence post to keep it from being buried under drifting sand in Cimarron County, Okla., in 1936.

In the 1930s, the Dust Bowl ravaged crops and helped plunge the U.S. into an environmental and economic depression. Farmland in parts of Texas, Kansas, Nebraska and the Dakotas disappeared.

After the howling winds passed and the dust settled, federal foresters planted 100 million trees across the Great Plains, forming a giant windbreak — known as a shelterbelt — that stretched from Texas to Canada.

Now, those trees are dying from drought, leaving some to worry whether another Dust Bowl might swirl up again.

An Experiment That Worked

In Western Oklahoma water is scarce, but rains often cause flooding. The ground is baked by searing heat, and raked by blizzards and ice storms. This environment has always been tough for farmers, who struggle to make the soil submit and stay near the ground. 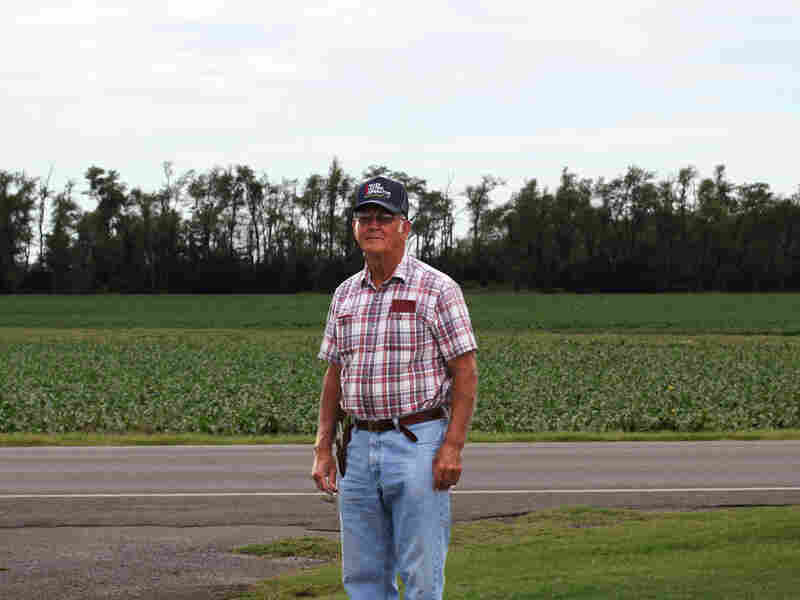 Jimmy Piercey stands outside a deteriorating line of trees meant to protect farmland like his own from dust storm destruction. Joe Wertz/StateImpact Oklahoma hide caption 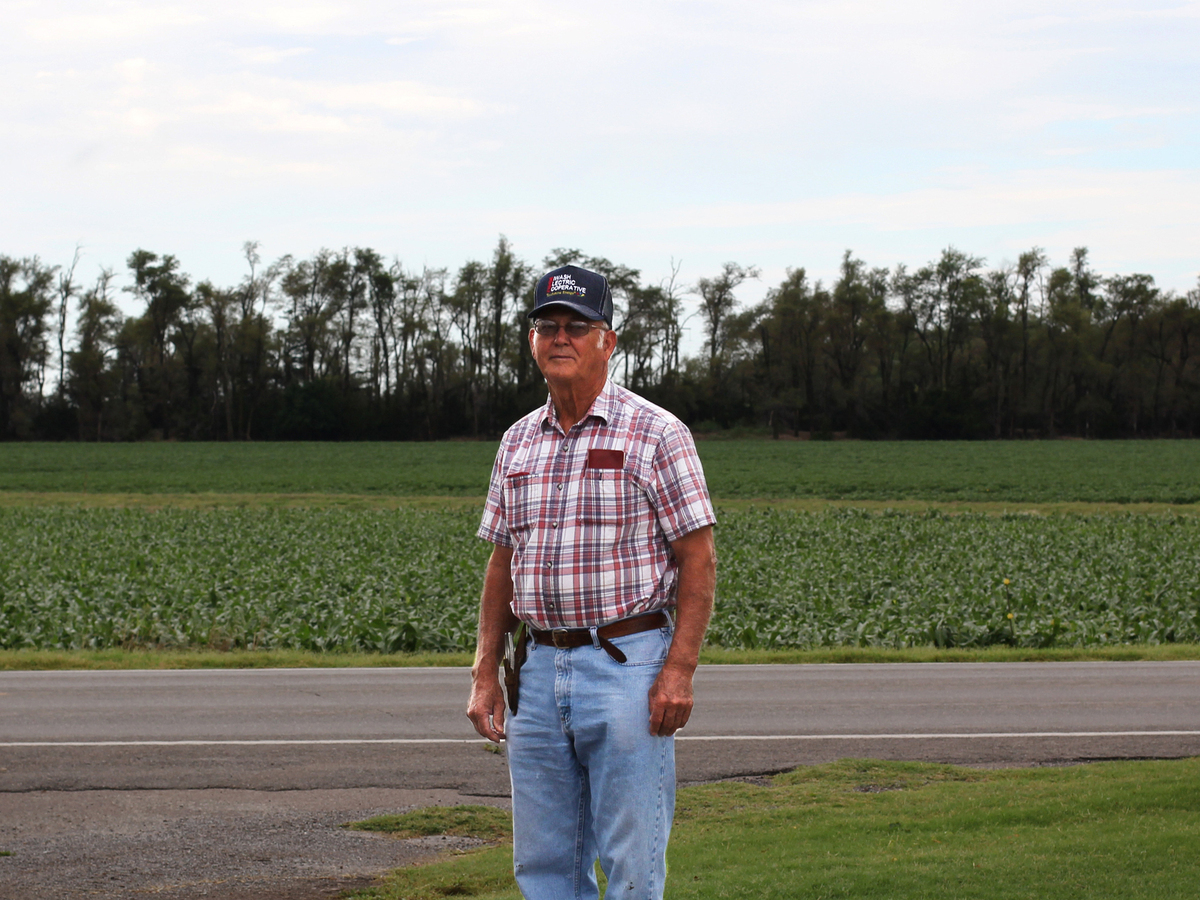 Jimmy Piercey stands outside a deteriorating line of trees meant to protect farmland like his own from dust storm destruction.

Back in the '30s, a combination of severe drought, overgrazing, and extensive plowing had rendered the ground rootless, loose and bone dry. Without anything to anchor it down, the dirt raged in dust storms dubbed "black blizzards." Hundreds of thousands of families fled their dust-shrouded farms to more livable lands.

In response, President Franklin D. Roosevelt's administration decided to plant a 1,000-mile line of trees, and the national shelterbelt program was born.

The idea was simple: A giant windbreak would shield crops, and prevent erosion. Landowners filled out an application, gave up a few acres of land, and agreed to maintain the trees. The federal government did the rest.

State forester Tom Murray says it was an experiment — and it worked. "This used to be a cotton field, if I remember right, looking back at the history," he says. "And it just blew — it's sand and it blew. By putting this here, it stopped that south wind from blowing across this field."

Now, drought threatens to sully the experiment's track record. As Oklahoma weathers a third year of drought, many of the trees that helped save the state decades ago are dying. Husks of trunks line the side of the highway.

Farmer Jimmy Piercey has lived in western Oklahoma all his life. He pointed to a line of trees as he drove along the shelterbelt trees that flank his farmhouse. "You see the tops of those trees?" he asked. "You see how they're dying? You can see how it's almost deteriorated to nothing."

Tom Lucas of the USDA's Natural Resources Conservation Service says government budgets are as tight as farm budgets, so a modern version of the New Deal-era program is unlikely. The national focus has shifted, but Lucas says the attitudes of Great Plains farmers have changed, too.

"They look at that and say, 'There's several acres out here because of the windbreak, and I need to put those into production,' so they may do away with the windbreak to try to get more return out of the land," he said.

Many of the farmers who saw the benefits of those shelterbelts are gone. Piercey says the trees used to be essential, but they were also burdensome. He also says agriculture has improved and modern soil conservation is much better now.

Still, if cycles of drought continue in the Great Plains, Murray worries about what the loss of those trees will mean. "Sure, we got some new farming practice out there ... but this ground will still move," he says.

Just last October, a 30-vehicle accident forced the Oklahoma highway patrol to shut down a major interstate. The reason? A massive dust storm.