Accessibility links
'Singing Just To Me': Gregory Porter On Musical Inheritance The jazz artist, who turned to singing when an injury ended his football career, claims three people as his main influences: his minister mother, his absentee father, and Nat King Cole. He discusses his musical life and the new album Liquid Spirit with NPR's Audie Cornish. 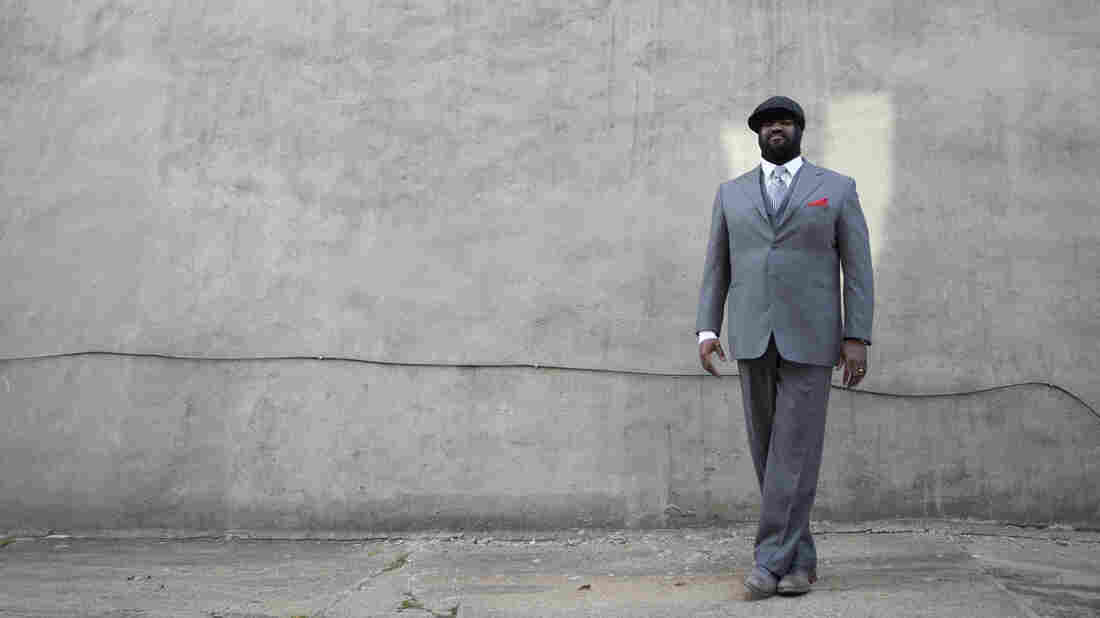 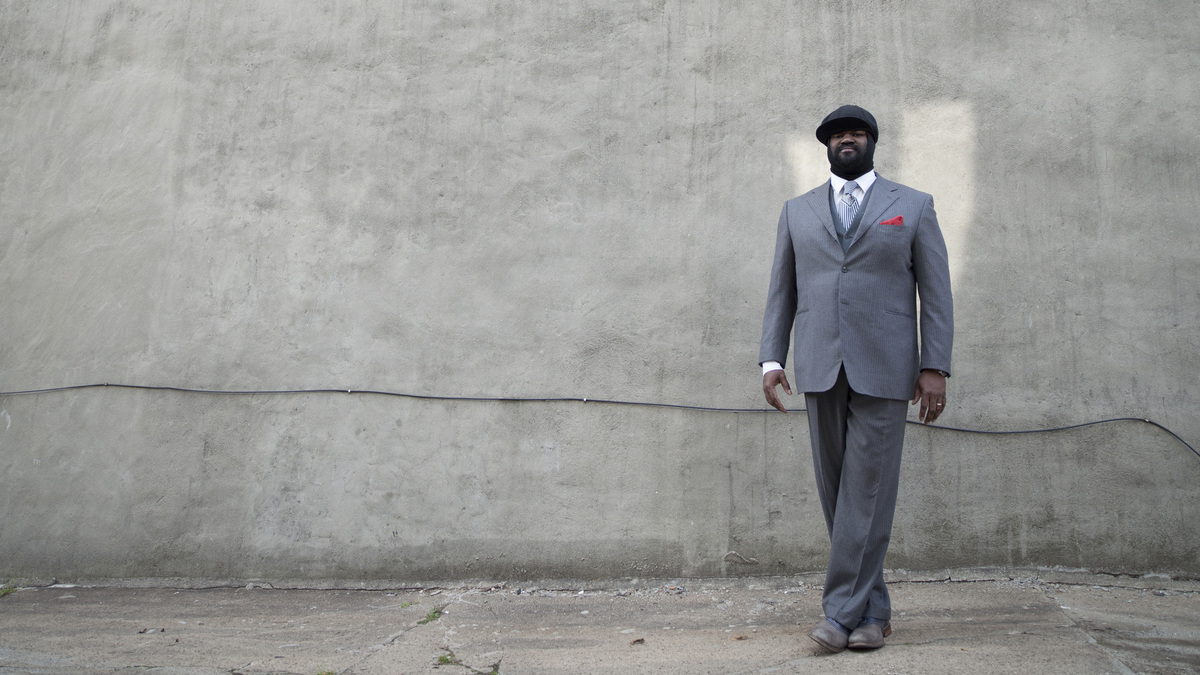 Shawn Peters /Courtesy of the artist

In his first semester playing football at San Diego State University, Gregory Porter severely injured his shoulder. Doctors told him his days on the field were over, but there was some good news: The school would let him keep his athletic scholarship. Suddenly without football, but with a lot of time on his hands, Porter searched for a new calling — and found it in his voice.

Hear 'Liquid Spirit' In Its Entirety

Gregory Porter has since become a world-renowned jazz singer; his latest album, out next week, is called Liquid Spirit. He recently spoke with NPR's Audie Cornish, and the conversation turned quickly from his football days to his late parents: the minister mother who raised him and the freewheeling father whose absence became a source both of pain and inspiration. Hear the radio version at the audio link and read more of their conversation below.

Being a college athlete can be like a full time job. What was it like letting that part of your life go?

I was devastated. I called my mother, crying. And she said, "So, you don't get hit in the head anymore. You don't get tackled and you won't be tackling anybody anymore. But you still get to keep your scholarship?" And, through tears, I'm like, "Yes!" And she's like, "Oh, this is great!" And I was like, "No, Mom, this is terrible!"

Another encounter I had with my mother was before her passing, just maybe a couple of years later. She had breast cancer; she had a couple of days left. On her deathbed, we were talking about everything: children, and how to buy a house, and what I'll do with the rest of my life. I wanted to tell her, "Mom, I'm studying city planning. I'll be a good municipal worker or whatever I'll be, so you don't have to worry about me when you leave." And she said to me, "Gregory, singing is one of the best things you do. Don't forget about that." In a way, she gave me this surprising nudge into music. ...She said, "Sing, baby," and laid her head down. So that's what I'm doing now.

What kind of music had you been listening to before? What brought you to jazz?

I heard myself in jazz, even as a child. My grandmother, and my mother, and my grandfather, their style of praying was all day long. They would pray by singing and humming, and some of the notes that they were hitting, I always equated to jazz saxophone players.

The song "Wolf Cry" has a kind of a croon to it, and a gentleness to it. Is that maybe where we're hearing a little Nat King Cole?

That influence is deep. I was 5 years old when I first broke into my mother's records and played Nat King Cole, and sat alongside the stereo and listened to Nat's music. My father wasn't raising me, and I was listening to these words: "Pick yourself up. Dust yourself off. Start all over again. You'll be a man someday." Nat King Cole's lyrics were speaking to me, almost like fatherly advice, when I was listening to him alongside the console stereo player. So that music and that influence comes out of me.

Tell us a little about writing this song.

I was on a train in France, and we passed by some sheep. I started to think, "I wonder if there are any wolves around here, in France." And then I was like, "Okay, boy who cries wolf. Girl who cries wolf." And then I started to think about my relationships: Is there anybody who I've been close to, who had been a deep friend, who I may have been in love with, who would call for help but really didn't need my help? That was the initial inspiration for the song. The second part of the song is, (singing) "After I have saved you and gathered all the pieces of your heart, that's when it starts / You gain your confidence and leave your innocence and vulnerability with me." It's just exploring the vulnerable positions that a man can be in when he loves somebody who loves somebody else.

Your writing is so evocative, and it made sense to me when I learned that you also have a musical theater background — in fact, you've written a musical yourself.

Yes, [and it] comes back to Nat King Cole and the absence of my father. At around 30 years old, I had a pain in my chest. I promise you, I didn't know what it was. And I had an urge to write.

And we should say this musical was called Nat King Cole and Me.

Right. When I heard Nat King Cole's voice, I was like, "That's a man's voice, who sang something wise that I should listen to." My mother said I wrote this little song when I was 5 — "Once upon a time, I had a dreamboat / Once upon a time, I had a love" — and put it on a tape and played it for her when she came home from work. And she said, "Boy, you sound like Nat King Cole." I remember just thinking how strange that name was.

I remember going through her records, finding his records and first seeing his image: this elegant, handsome, strong man sitting by a fire, looking like somebody's daddy. And I was like, "Wow, okay." Then I put it on. "The greatest thing you'll ever learn is just to love and be loved in return": These powerful words I started to listen to, they affected me as a child. I remember just sitting by myself and putting these records on, which I was forbidden to do, and receiving some real powerful pleasure and comfort — feeling like these songs were written, and he was singing, just to me.

Can I ask about your father? What happened to him?

He was this charismatic preacher-singer-painter. He was in the military. These are all things I found out at his funeral. After he divorced my mother, he came around, but not often. I didn't spend time with him, never made a connection with him. If I'm honest with myself, I can say I didn't know him. I have a brother who spent some time with him, and an older sister — she was his angel. But for me, I didn't know him and wasn't raised in the same house with him. He didn't come to see me.

So there's no musical connection there?

Well, there is now. In the musical I created, there's an apology from him. His character actually says to me that he's sorry. Once I performed it on stage at the Denver Center [for the Performing Arts], I actually released that bitterness that I had towards him. In writing in this record, I have to give my mother all the credit and love that she is due, but I also have to give my father some thanks for my creativity. I'm almost certain, genetically, it comes from him. Listening to the people who talked at his funeral, they said, "Man, he could just write anything, paint anything, think of anything. He would come up with words we hadn't even heard of." So I'm certain my creativity — and, if I have stage charisma — it comes from him. My singing voice comes from him.

It seems as though your father, or the absence of your father, really drove and inspired your early work. Now that you've worked out some of those demons on stage, do you feel like you've moved on?

No, I don't think so. I think part of my job as a songwriter is to go back in my memory and pull up those pains for other people, because somebody else is going to come along who didn't have a good issue with their father. So it's my job to go back and think of those difficult moments — and the beautiful moments. I'm going to continue to deal with that issue and it's going to come out in a whole bunch of different ways.

There's a song that I'm currently working on. He was a painter, a house painter, and the song is called "A Man on a Ladder." And I stand at the bottom of the ladder, waiting to catch some of the over-spray from the paint, so it can land on my face so people will know that I'm the son of this painter. That sounds like this interesting construction for music's sake, but that's really what I used to do.

I can't help but wonder what that song sounds like. Would you sing any of it?

(Singing) "He had a big head and real wide shoulders and real small feet / So small, I couldn't see his footprints." It goes on with a bunch of symbolism — difficult things to pick out, but things that mean something to me. "A big head": great thinker. "Wide shoulders": a really big man. But "real small feet": I can't see his footsteps. I don't know which way to go, because I didn't have a man to guide me and lead me and direct me in the way that fathers do.

I think both of your parents would be so honored by the way you've built their legacy into your music.

Yeah, I do hope so. I do hope not to dishonor them in any way. I'm very proud of my mother; she was an extraordinary woman. She keeps creeping up in my music and I love that. I love that.