Accessibility links
Hannibal Buress And The Comedy Of The Unexpected A former Saturday Night Live writer and an alumnus of 30 Rock, the comic hosts a weekly stand-up night at The Knitting Factory in Brooklyn, where surprise guests have included Louis C.K., Chris Rock and Sarah Silverman. When he's on his game, you're sometimes not at all sure why you're laughing.

With Hannibal Buress, sometimes you don't even know why you're laughing. Take the bit he does about having a surplus of pickle juice: how it came to be, what he's doing about it, what the consequences might be if you mess with it.

Or take the answer we got when Buress — a former writer for Saturday Night Live and 30 Rock, a touring stand-up comic and host of a weekly comedy night at Brooklyn's Knitting Factory — stopped by our New York studios, and NPR's David Greene asked him how he got into comedy in the first place.

"My regular answer is that I started doing open mics in college," he says. "It's true, but that's not — that's boring to me. And so when people say, how did you start in comedy, I say my family was kidnapped by ninjas when I was very young, and to get them released I had to do a killer five-minute set. And even after I did that, you know, I started doing comedy under tough circumstances, I still kept at it, because I enjoyed it." 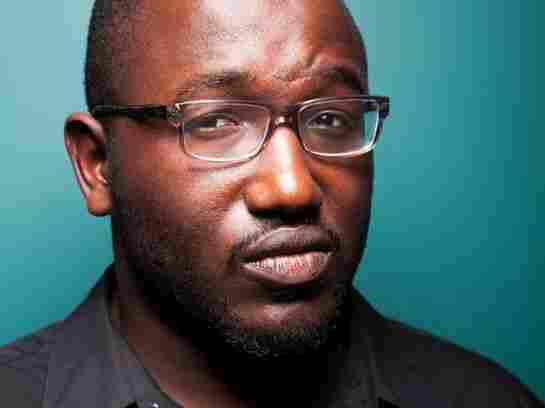 Hannibal Buress looks at the world from a slightly skewed perspective — and often as not, his observations lead him down some convoluted comedic byways. Courtesy of the artist hide caption 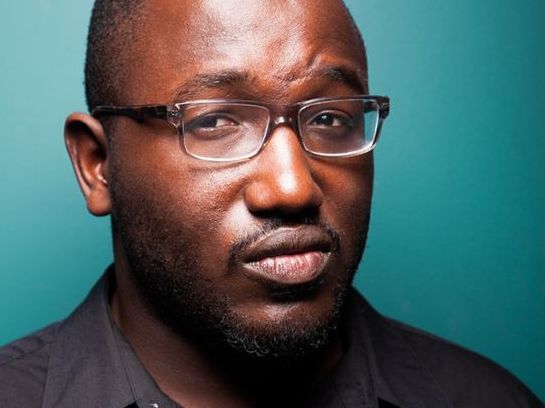 Hannibal Buress looks at the world from a slightly skewed perspective — and often as not, his observations lead him down some convoluted comedic byways.

When A Drop-In Doesn't Go As Planned

The truth — at least we think — is that Buress did start at an open-mic night. And it was in college, at Southern Illinois University. But his college career was brief. After tasting comedy onstage, he dropped out and moved to New York, hoping to get some gigs and live with his sister.

She wasn't exactly on board. And within a few weeks, he found himself sleeping on the subway.

"Well it's just 'cause I popped up. I didn't even hit her up — 'Hey, can I stay?' I just popped up, 'Hey, whassup, I'm here. I got $200 and dreams, let's do this thing.' Nothing else to offer, no job set up. ... My niece, she was about to turn 1. So I was just poppin' in on this family without even asking. Know what I mean? It was obnoxious. I didn't realize it at the time, but it was one of the most obnoxious things I've ever done."

He'd stay in hostels when he could get work, or crash with a friend.

"But yeah, there were some nights when I wouldn't have the money for a hostel, or a friend wasn't able to let me stay, so I would crash out on the train.

"It was just really goofy on my part," he admits, in retrospect. " 'Cause I didn't have to do that. I could have — one, I could have made up with my sister and apologized for popping in on her place like that. But I was too cocky. And two, I could have just gone back home to Chicago. So it was just goofiness on my part. I don't glamorize it, like, 'Oh, I was living on the train for my dream. It wasn't; I don't look at it like that at all."

One of Buress' singularly strange routines involves a whole lot of on-sale apple juice, a fellow shopper who gives Buress and his (white) girlfriend a sideways look, and a misunderstanding. Easier if we just embed it here:

"That happened pretty much verbatim," Buress says. "The whole thing — up until me and my girl stepped out of the store, I thought he was upset about the apple juice."

It was his girlfriend who picked up on the other possible interpretation for the man's disapproval. But then Buress says commentary on racial issues isn't a big thing in his act.

"I'm doin' something different," he says. "I mean, I talk a little bit about race and interracial dating, but it's not the heart of my act. I just try to do what I think is funny; there's no huge message or through line."

Whether Buress is trying to send a message or not, part of his act is never seeming like he's trying too hard. He like to dabble in hip-hop, for instance — though you couldn't say he really labors over the lyrics.

The Genesis Of The 'Gibberish Rap'

"Gibberish rap is — I freestyle all the time, just hangin' out with friends," he says. "And sometimes when I'm freestyling, I'll lose my flow, you know, but I'll still wanna — I don't wanna just stop rapping because I lose my flow. So I'll just put in nonsense words till I can bring in regular words again.

"So that was a freestyle, but I was scared to just perform it. 'Cause I think the song is pretty dumb, kinda bad. So I don't wanna perform it without some type of production. Or stage spectacle."

"It's just me takin' a goofy freestyle to the limit," Buress grins. "Havin' fun, and puttin' on a huge spectacle for nothin'."

And no, the ballerinas don't travel with Buress. They're jobbed in at each stop on the tour, from among local talent. Who might just be glad to pick up a little easy work that doesn't involve sugar plums and nutcrackers.

"It's not your normal performance, but I think they like doing something different," he says. "How often do you have some comedian come through the town and say, 'Hey, I need eight ballerinas to dance while I do this rap song?"