Accessibility links
See Ya, Voyager: Probe Has Finally Entered Interstellar Space "This is the real deal. Voyager 1 has finally reached interstellar space; the first time a spacecraft has been in the space between the stars," says one project scientist. Launched in 1977, the probe has been surveying the solar system. 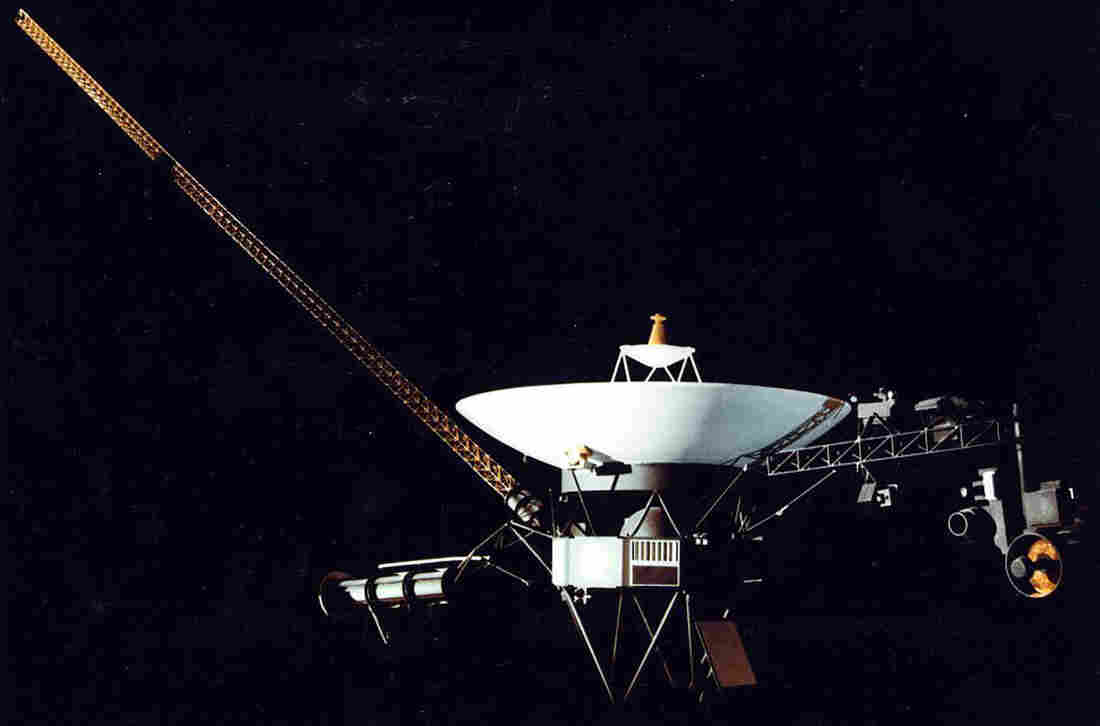 This artist's illustration shows the Voyager 1 space probe. The spacecraft was launched on Sept. 5, 1977, and as of August 2012, it is outside the bubble of hot gas, known as the "heliopause," that radiates from the sun. NASA/Landov hide caption

NASA's two Voyager spacecraft, launched in 1977, have made history in a dramatic fashion by exploring the outer planets: Jupiter, Saturn, Uranus and Neptune. Now one of the vehicles, Voyager I, has made another pioneering leap. It is the first spacecraft to leave the vast bubble of hot gas that surrounds our solar system.

At long last, Voyager 1 is now in interstellar space.

There was no question that the Voyager spacecraft would someday become the first objects made by human beings to get there. Unknown, though, was whether the probes would still be able to send back the news when they did.

"Most of us felt that we could at least get to Neptune, but we had no idea how much farther it would be," says Edward Stone, who has been the Voyager chief scientist for more than 40 years, is also a physicist at the California Institute of Technology.

He and the other scientists have been waiting patiently for the moment when they could say that Voyager has finally entered interstellar space. That's defined as the region outside a huge bubble of hot gas that flows from the sun — the solar wind. That wind dies when it eventually runs into the cooler gas that permeates the galaxy. That's where interstellar space begins.

"This is the real deal," Stone says. "Voyager 1 has finally reached interstellar space; the first time a spacecraft has been in the space between the stars."

Scientists have been anticipating the event for decades and now believe it occurred a year ago. The instrument on board Voyager 1 that could have notified the team immediately died in 1980.

Voyager Has Left The Solar System (This Time For Real!)

Happily, there is a second instrument on board that measures the environment around the spacecraft. Donald Gurnett, a physics and astronomy professor at the University of Iowa, helped build that instrument back in the 1970s, and he is in charge of it today.

But his instrument can only measure the spacecraft's environment when the thin gas surrounding Voyager gets a jolt of energy — say, from the sun.

"When you have big explosions on the sun, it sends out a huge shock wave," Gurnett says, and that shock wave perturbs the gas.

Last fall, there was a storm on the sun, and Gurnett's instrument picked up the signal. And in May of this year, another solar storm came crashing through. The difference between the two signals was dramatic evidence that Voyager I is now immersed in gases that are colder and denser, outside of the sun's influence. As he reports in the journal Science, Gurnett says that's strong evidence that the probe is in interstellar space.

When the Voyagers launched in 1977, nobody knew exactly how far away from Earth this boundary would be.

"It's really incredible how far we are. We're three times as far as Pluto — more than that, actually," Gurnett says.

Another way to look at the distance: It takes 17 hours for the radio signal to get back to the Earth, traveling at the speed of light. In comparison, it takes about 8 minutes for light to reach Earth from the sun. He says the original Voyager team didn't want to believe it was that far away.

"Maybe 30 years ago, people thought it was just beyond the orbit of Jupiter. And I don't think at the time anybody wanted to believe we'd have to go another 20 years before we got there. But that's in fact how it turned out," Gurnett says.

Like Gurnett, Edward Stone at Caltech has been waiting for this, as yet another auspicious moment in Voyager's already spectacular career.

"It's not only having achieved a major exploration goal, sort of like the circumnavigation of the Earth for the first time, or landing footprints on the moon for the first time, this is the spacecraft to interstellar space," Stone says "That means this is the beginning of a new journey of exploration for Voyager. So rather than ending, we're just starting the next new phase."

Stone says there is still a lot to learn, and Voyager 1 probably has another decade of power from its nuclear generator to keep going.