Accessibility links
Frenemies Forever: Why Putin And Obama Can't Get Along Vladimir Putin took a deliberate jab at President Obama, just when the two nations are attempting to make a deal on Syria. Putin is not only seeking to have the upper hand in U.S.-Russia relations but to teach Obama a lesson. 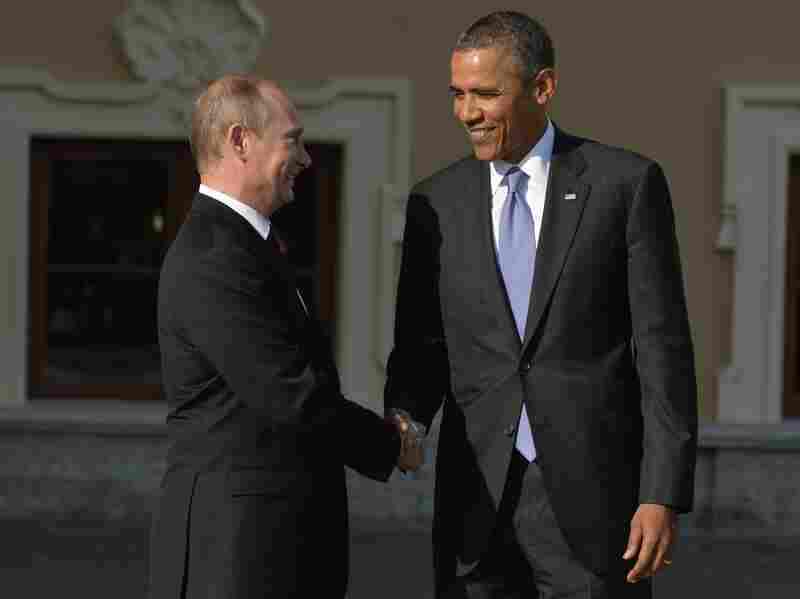 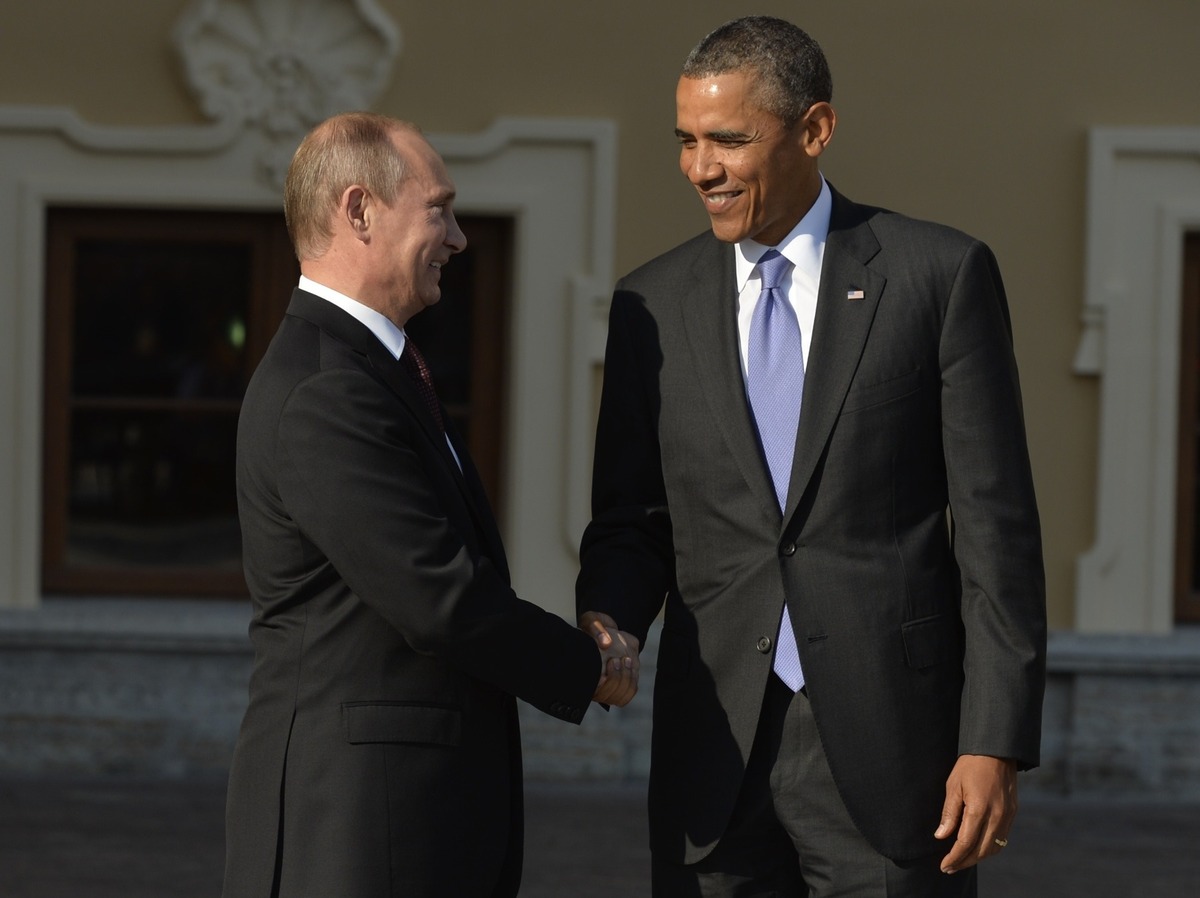 Russia's President Vladimir Putin welcomes President Obama at the start of the G-20 summit on Sept. 5 in St. Petersburg. Russia.

Leaders who respect each other and have a good relationship don't mock each other.

Barack Obama and Vladimir Putin do not have a good relationship.

Just as Russia and the U.S. are attempting to work out a delicate deal to rid Syria of chemical weapons, the Russian president published an op-ed in The New York Times thumbing his nose at President Obama.

Reactions to the affront have been strong.

The piece dropped just as Secretary of State John Kerry and Russian Foreign Minister Sergey Lavrov are meeting in Geneva in hopes of coming up with a deal on Syria. Both Putin and Obama expressed hopes Thursday that the talks would be productive.

As long as the two countries keep talking — something they've had a hard time doing lately — the personal animosity that lies barely beneath the surface between the two presidents may not matter so much.

But it doesn't make negotiations any easier.

"The personal relationship is very bad," says Matthew Rojansky, who directs an institute on Russia at the Woodrow Wilson International Center for Scholars. "There's no sugarcoating that, even though both have tried."

The op-ed wasn't pleasant. Putin writes that his relationship with Obama "is marked by growing trust." Yet he adopts a lecturing, disapproving tone, taking issue with Obama's characterization of the U.S. as an exceptional nation.

"It is alarming that military intervention in internal conflicts in foreign countries has become commonplace for the United States," Putin writes. "Is it in America's long-term interest? I doubt it."

The article's placement in the most prominent American newspaper also seemed intended as a jab at Obama.

"It's fairly unprecedented in the history of the relationship," says Leon Aron, director of Russian studies at the American Enterprise Institute. "This is a kind of patronizing that I certainly don't recall, ever."

For all the tension that existed between them, Leonid Brezhnev never tried to pants Richard Nixon in quite this way. And Putin's gesture comes at a curious time: You would think that while the two countries are trying to conduct sensitive talks about Syria their leaders would only be saying soothing things about working together on common goals.

But the reality is that the U.S. and Russia look at Syria through entirely different lenses. While Obama sees the situation as a humanitarian crisis, Russia worries that the U.S. is looking for one more excuse to intervene in its geopolitical sphere.

Putin has long been frustrated by U.S. military actions that have led to regime change in Iraq and Libya. He doesn't like autocrats being ousted from power because, well, it sets a bad example for the folks at home.

To him, Syria looks like more of the same.

"Putin has been from the very beginning saying to America, 'You're overreaching; you don't understand the Arab world; stop it,' " says Peter Rutland, an expert on Russia at Wesleyan University.

The op-ed "is an 'I told you so,' basically," Rutland says. "He's probably tired of giving the U.S. the same lesson and decided to lay it out in words of one syllable."

Putin and his inner circle may have been waiting for an opportunity like this.

"He has achieved this position of hectoring and lecturing the U.S. about what to do, because Putin is this deus ex machina who delivered peace [on Syria]," Aron says. "I don't know if they're drinking vodka or champagne or both."

Since Putin returned to the presidency last year, Russian relations with the U.S. have been marked by a series of hostile gestures.

Last month, Obama angered Putin by describing him as "looking like the bored kid in the back of the classroom."

Those remarks came in the context of Obama's insistence that he doesn't "have a bad personal relationship with Putin."

But the "bored kid" comment was only his latest cranky characterization of Putin. Prior to meeting with the Russians in 2009, Obama said in an interview, "I think Putin has one foot in the old ways of doing business and one foot in the new."

"It was diplomatically incredibly clumsy, because obviously Putin would react badly to that," says Rutland, the Wesleyan government professor. "The relationship was dead on arrival, the personal relationship."

Now the two countries are working together in search of a solution regarding Syria's chemical weapons. It won't be easy — and certainly many American officials harbor doubts about whether Russia is negotiating in good faith.

But there's potential upside for both countries. Russia would like to see Syrian President Bashar Assad stay in power and keep U.S. cruise missiles out of the conflict.

Obama, meanwhile, seized on the diplomatic opening made by Russia as a way of extricating himself from a political mess at home, given lack of congressional support for a bombing campaign against Syria.

Putin now perceives himself as having saved Obama's bacon. As such, he believes he's earned bragging rights.

Which he took full advantage of with his Times op-ed.

"It may be that this is the main thing that Putin wanted from it all — the poke in the eye," Rutland says.