Accessibility links
Off The Tuscan Coast, Raising The Ill-Fated Costa Concordia Next week, a salvage crew plans to rotate and raise the Costa Concordia cruise ship, in one of the biggest maritime salvage operations ever undertaken. The huge vessel has been partially submerged off Giglio Island since an accident in January 2012 that killed 32 people. 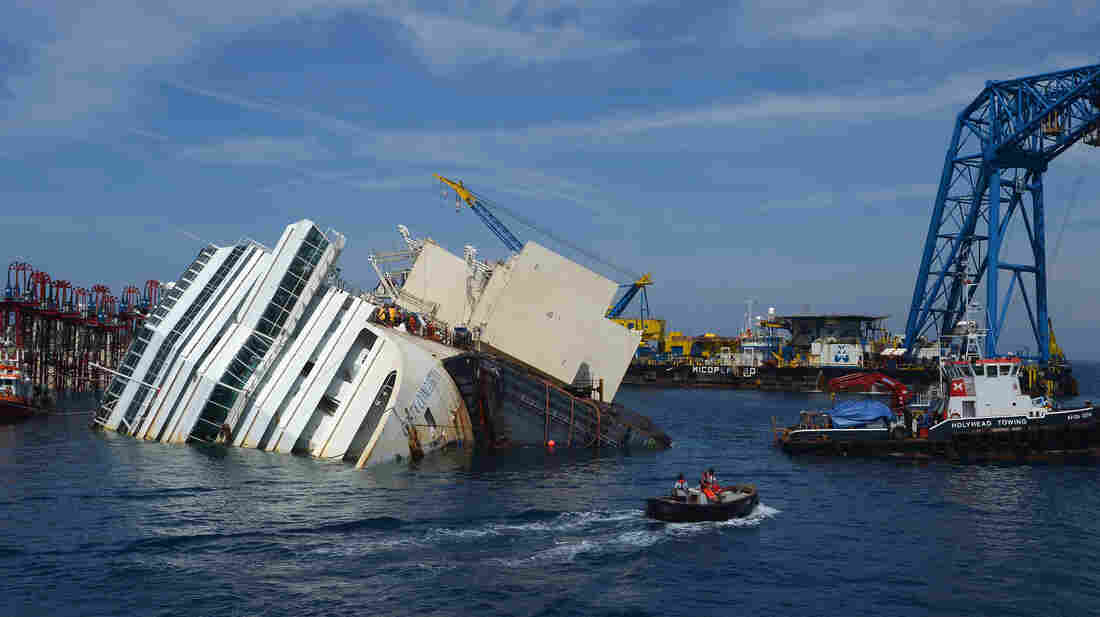 Salvage workers prepare the Costa Concordia cruise ship on Aug. 23 in the waters of the Tuscan island of Giglio. The massive cruise ship has lain partially submerged after a disaster on Jan. 13, 2012, that killed 32 people. Vincenzo Pinto/AFP/Getty Images hide caption 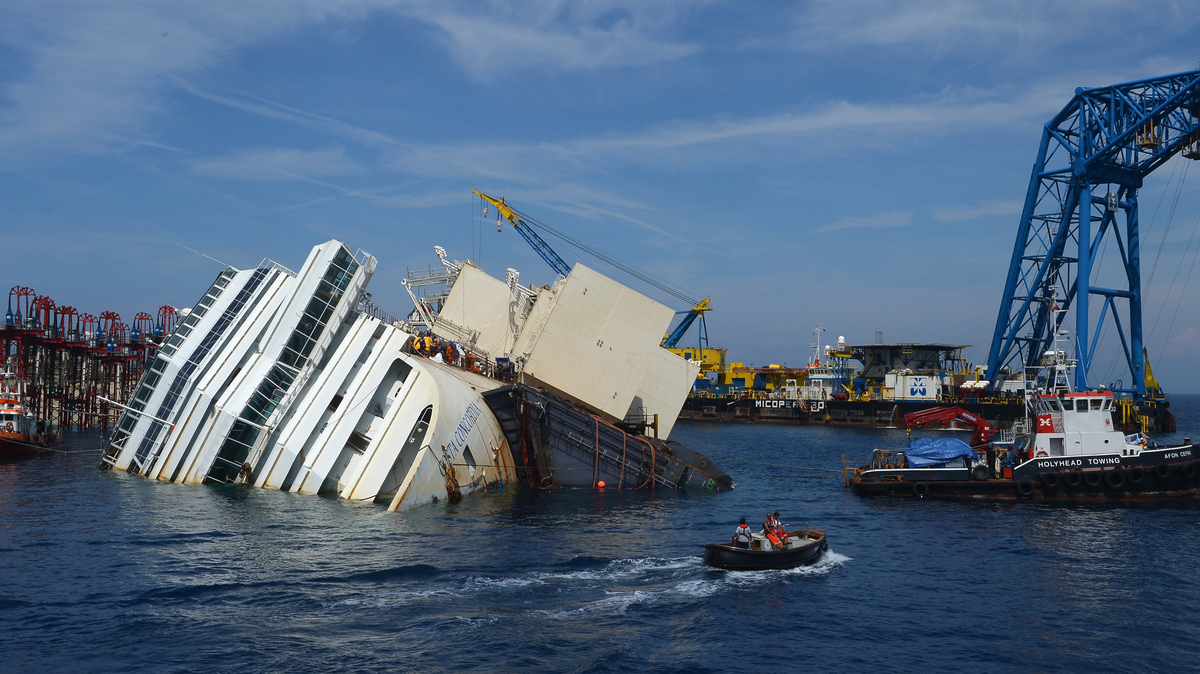 Salvage workers prepare the Costa Concordia cruise ship on Aug. 23 in the waters of the Tuscan island of Giglio. The massive cruise ship has lain partially submerged after a disaster on Jan. 13, 2012, that killed 32 people.

Weather permitting, one of the largest maritime salvage operations ever attempted will get underway Monday in the waters off of an Italian island.

Twenty months ago, in January 2012, the Costa Concordia luxury liner smashed into a jagged reef, killing 32 people. Since then, the vessel has being lying on its side — an unsightly wreck visible for miles around.

The salvage operation aims to bring the ship back upright — all in one piece.

Waves lapping against the pier on the island of Giglio drown out the drone of the massive machines, cranes and barges surrounding the shipwreck.

The Costa Concordia is the length of three football fields and as high as an 11-story building.

Its carcass is like an alien from outer space that plopped down alongside the wooden dinghies moored in the small fishing port.

For 14 months, 500 workers of 26 different nationalities have been hard at work preparing for the operation to rotate the ship upright — or what's known in the salvage trade as parbuckling.

"It's an old nautical term ... from the days of sailing ships," says Nick Sloane, the South African salvage master in charge of the Costa Concordia removal operation. "In those days, they could use the leverage of the mast and the sail booms to assist" in raising a ship.

The cost of the operation, insurance companies warn, could exceed $1 billion. 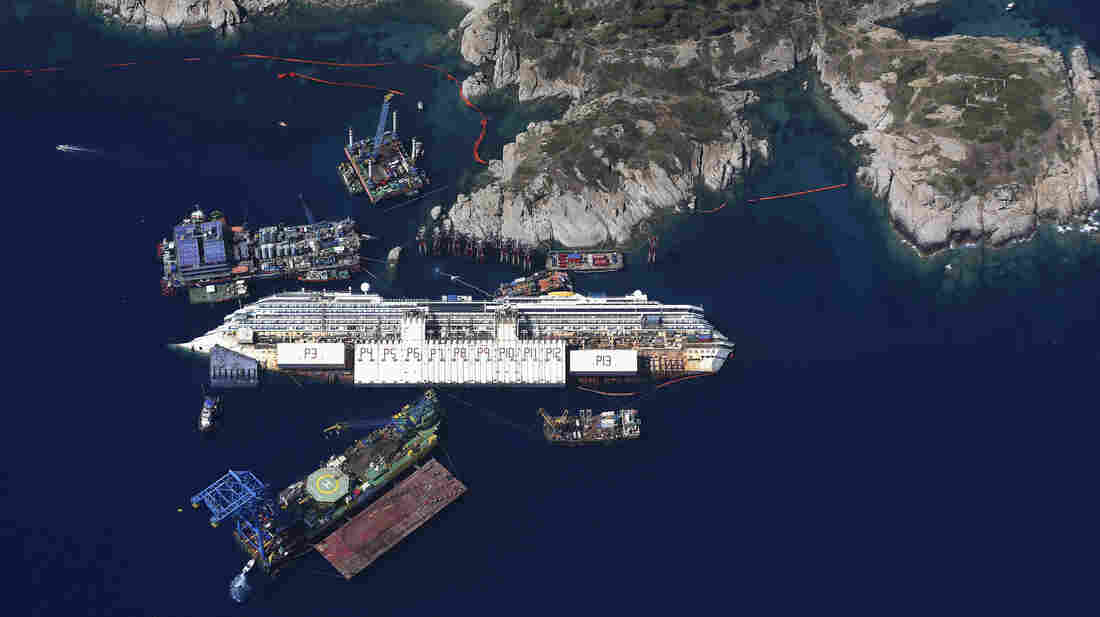 An aerial view taken on Aug. 23 shows the Costa Concordia as it lies on its side next to Giglio Island. The wrecked cruise ship will be rolled off the seabed and onto underwater platforms. Alessandro Bianchi/Reuters/Landov hide caption 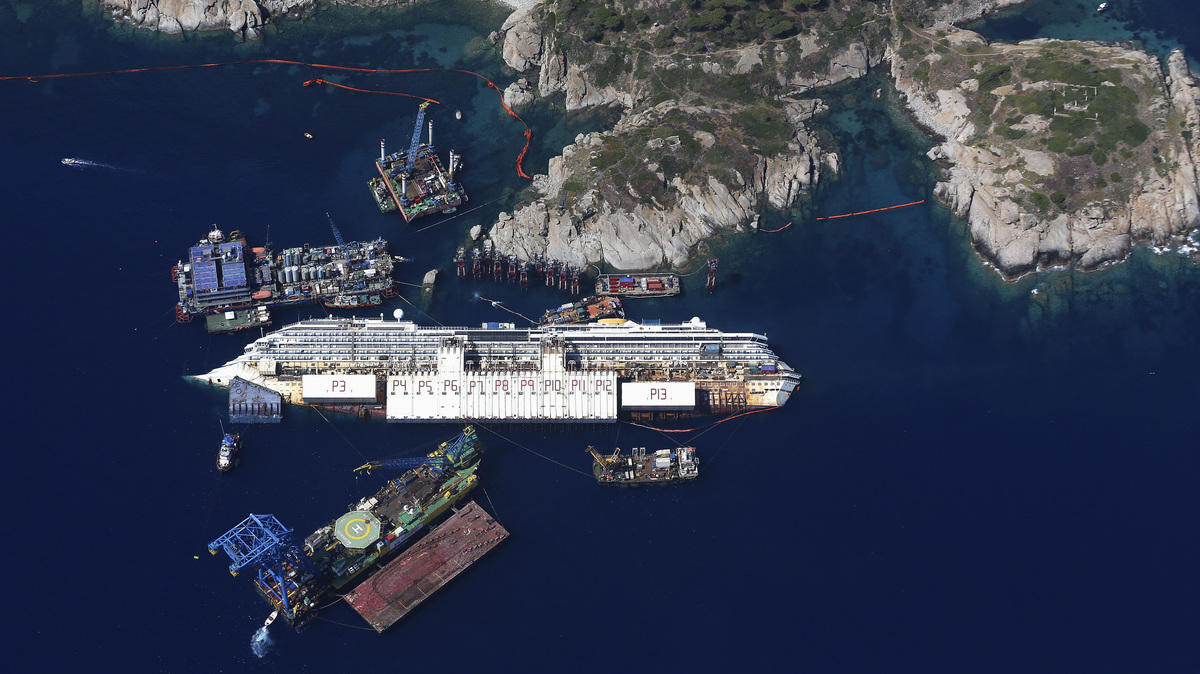 An aerial view taken on Aug. 23 shows the Costa Concordia as it lies on its side next to Giglio Island. The wrecked cruise ship will be rolled off the seabed and onto underwater platforms.

Weighing more than 114,000 tons, the ship rests precariously on two sloping underwater granite reefs. Sloane's crew has pumped 18,000 tons of cement to fill the gaps between the reefs and support the hull.

With the use of cranes and winches, giant steel chains — each link weighing some 750 pounds — have been looped under the vessel to help pull it upright.

To protect the bow of the Concordia, it's been cradled in a specially built buoyancy tank that Sloane says is similar to a collar brace for an injured person.

"Before you rotate the patient you want to support the neck, so this is going to support her bow as we roll her over," he says. "That will reduce all the impacts on her spinal structure members, and that is going to save the bow during the parbuckle operation."

The most challenging part of the preparatory work was drilling into the reef to build an artificial seabed on which the upright vessel will rest: six steel platforms each the size of 1 1/2 football fields.

The granite off Giglio Island is the hardest rock known to man, Sloane says.

"It's like trying to drill with a hand drill on a plane of glass at a 45-degree angle and it just skips off the glass," he says. "The drill just wants to kick off the whole time away from the granite."

With the ship chained to the mainland on one side and to steel pylons on the other, dozens of pulleys will slowly pull and rotate the ship upright at a rate of about 9 feet per hour. 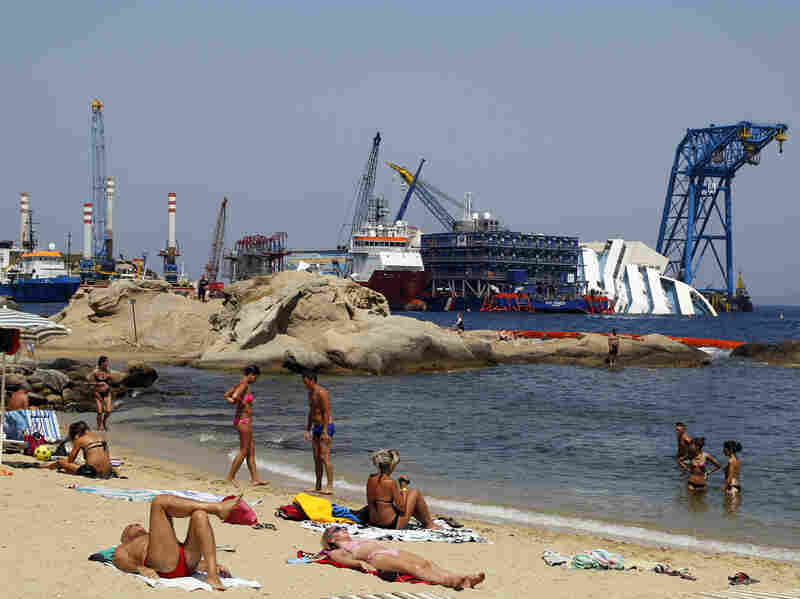 People sunbathe in front of the capsized Costa Concordia outside Giglio harbor, on Aug. 8. The cost of the salvage operation — one of the biggest in history — could exceed $1 billion. Stefano Rellandini/Reuters/Landov hide caption 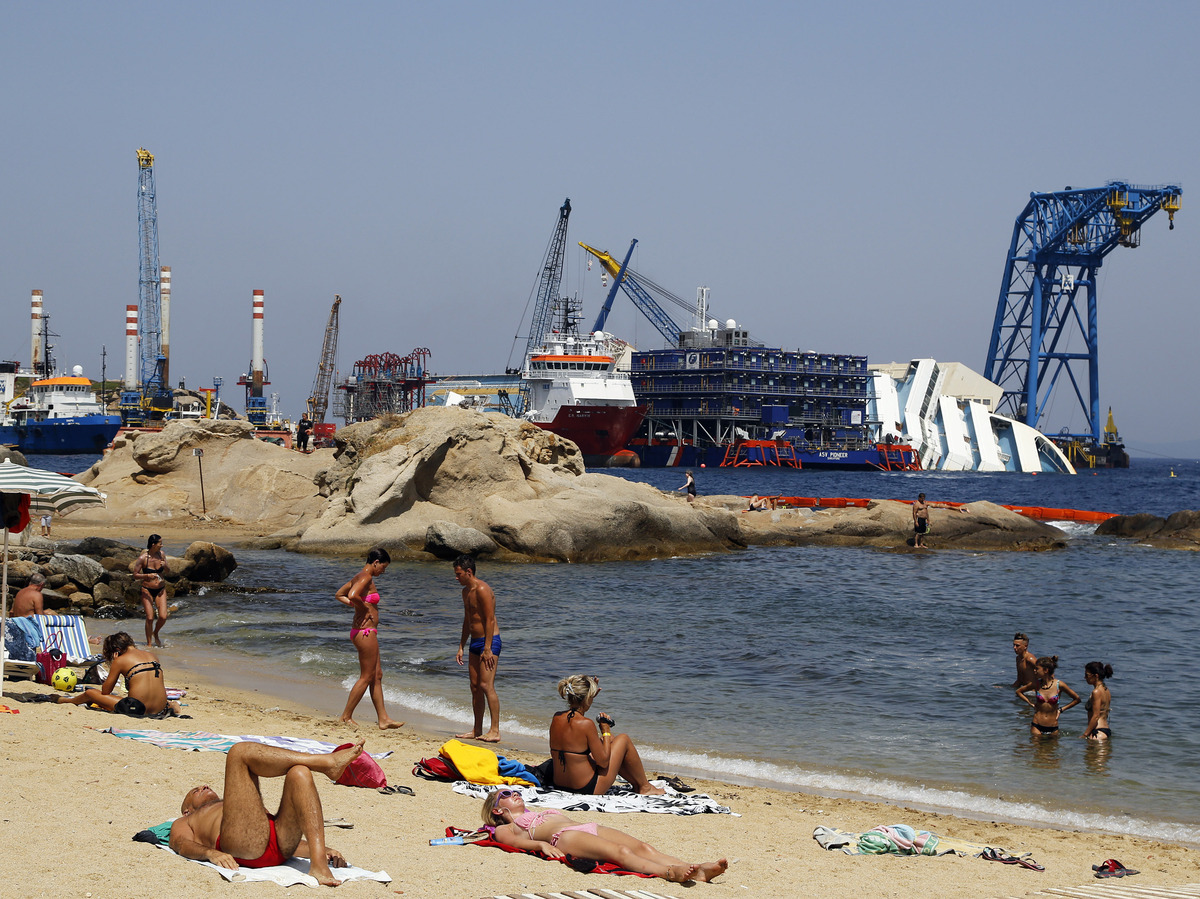 People sunbathe in front of the capsized Costa Concordia outside Giglio harbor, on Aug. 8. The cost of the salvage operation — one of the biggest in history — could exceed $1 billion.

The operation is expected to be extremely noisy from the wrenching and fracture of some parts of the internal structure.

But the salvage team is confident the external structure will remain intact — so confident, in fact, that there is no Plan B if something goes wrong.

"The salvage team and the international commission of engineers and experts overseeing the Concordia removal have given me all the necessary assurances that the operation is ready to start," he said.

Massimo Luschi is the head engineer who gave the all-systems-go. He dismisses concerns that the parbuckling could lead to an environmental disaster. He says that along with the fuel, most of the toxic substances on the ship have already been pumped out. Every accessible crack and porthole, he says, has been sealed.

"We have no worries whatsoever," Luschi says. "I dare say this is the most monitored section of the sea around Italy. We have kept this area under careful surveillance every single day since the shipwreck."

Giglio residents, Luschi adds, should be warned that the rising of the ship will unleash an intense stench of rotten eggs — the result of rotting food onboard a ship carrying more than 4,000 people.

Ghosts Of The Costa Concordia

But despite the experts' show of confidence, there is one very big question mark: No one knows the exact condition of the side of the ship lying on the reef, which juts into the hull by as much as 30 feet.

Once upright, workers will look for the bodies of the two people believed to be still trapped under the ship.

Throughout their work, Sloane says, his crew has been well aware of the many ghosts of the Costa Concordia.

"When you stand onboard and you actually look and you feel the passenger ship, it is a strange feeling, because you can see through some of the portholes, and you see the cabin, exactly how it was," he says. "People don't forget that. Every day it's there; you are aware of it."

The salvage operation is being financed by insurance companies for ship owner Costa Crociere, which in turn is owned by the U.S. giant Carnival.

After negotiating plea bargains, four crew members and the head of the Costa Cruises crisis unit were given short jail sentences in July.

The trial of the ship's captain, Francesco Schettino, charged with manslaughter and abandoning ship before all passengers were evacuated, resumes later this month.

In a controversial ruling that sidestepped criminal charges, Costa, as Schettino's employer, admitted some responsibility and was ordered to pay $1.3 million.