Accessibility links
In France's Camargue, Bulls Are A Passion And A Way Of Life The marshy wetlands of the Camargue in southern France are rich in wildlife and folklore. But the region's most stunning icons roams free here: the Camargue bull, one of Europe's last two breeds of fighting bulls. The creatures are taunted and teased, respected and revered. 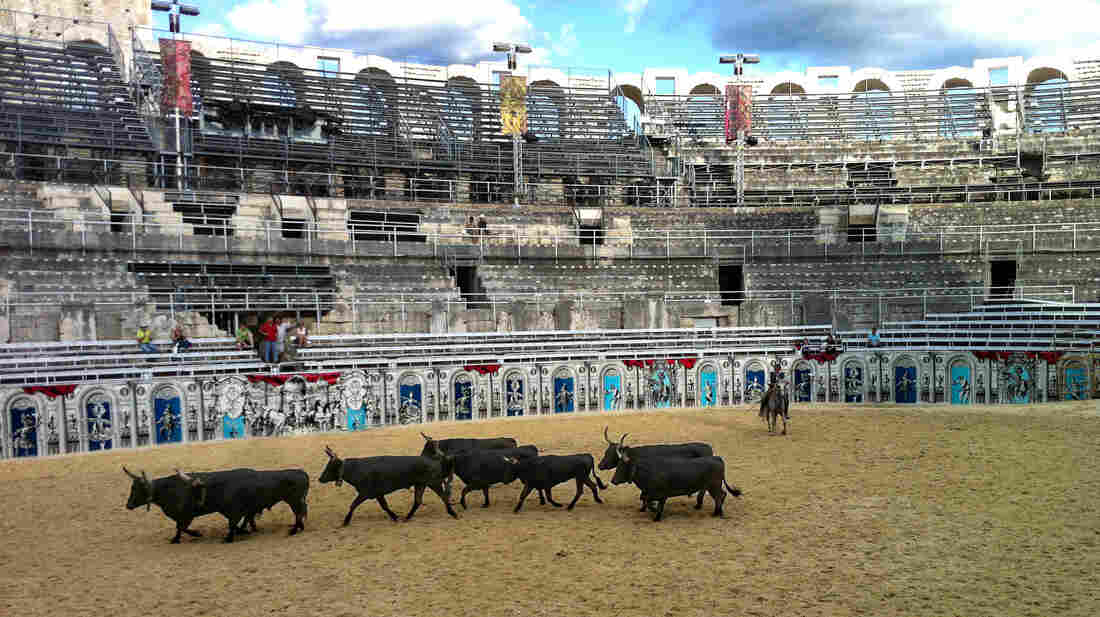 The black, long-horned Camargue bull is just one of two breeds of fighting bulls in Europe. The bulls are shown here at the Roman arena in Arles, southern France. Eleanor Beardsley/NPR hide caption 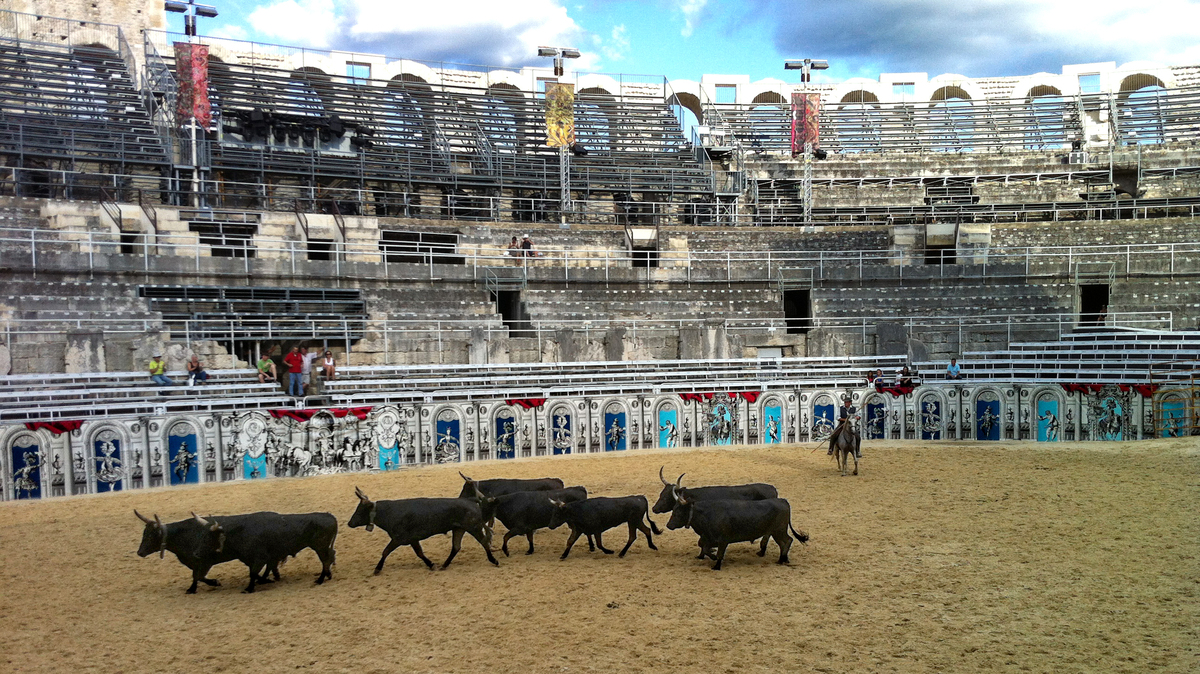 The black, long-horned Camargue bull is just one of two breeds of fighting bulls in Europe. The bulls are shown here at the Roman arena in Arles, southern France.

Amid streaks of lightning and startling thunder claps on a recent day, I head out into the middle of the marshy wetlands known as the Camargue. I'm with a group of tourists, piled on hay bales in the back of a flatbed trailer pulled by a massive tractor.

The delta in southern France where two branches of the Rhone River meet the sea, the Camargue is the biggest Mediterranean delta after the Nile. The stunning ecosystem is home to pink flamingos, rice paddies and salt, which has been harvested here since the Middle Ages.

But the Camargue's most stunning icons are its white horses and black, long-horned bulls that roam free over much of the 360-square-mile area. 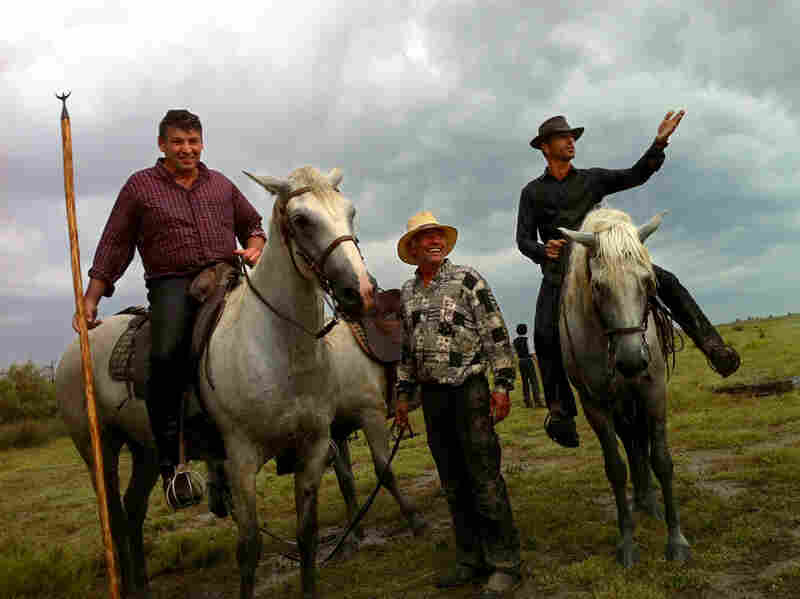 Gardiens, or cowboys, Renaud Vinuesa (on horseback, left) and Olivier Terroux (on horseback, right) are out in the Camargue region of southern France for a branding, or la ferrade, with their tridents. Eleanor Beardsley/NPR hide caption 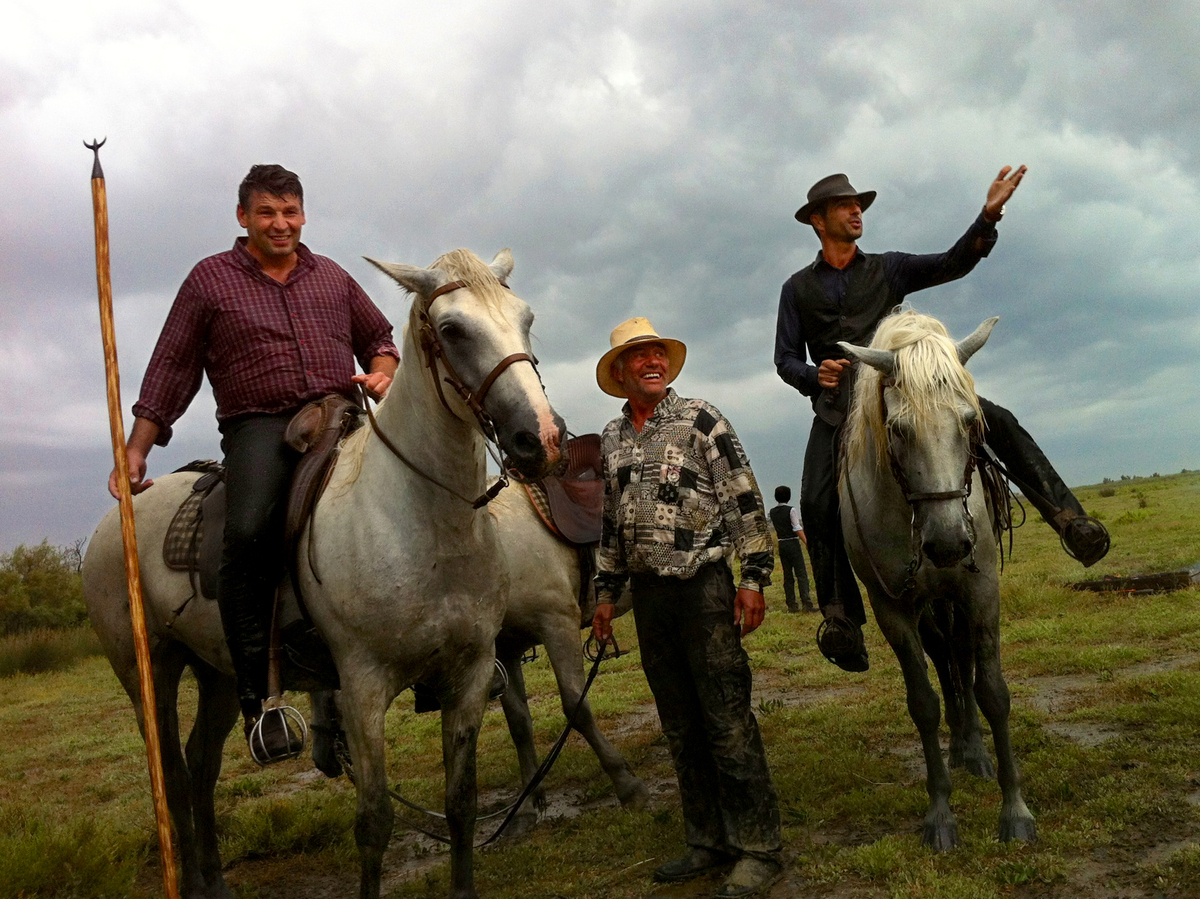 Gardiens, or cowboys, Renaud Vinuesa (on horseback, left) and Olivier Terroux (on horseback, right) are out in the Camargue region of southern France for a branding, or la ferrade, with their tridents.

Ranch hand Olivier Terroux says horse, bull and man are all linked in the Camargue.

"The Camargue horses, which are the last ridden work horse bred in France, are our link with the bulls," says Terroux. "They help us manage the herds. But for the horses it's not work, it's like a game. It's instinct. They're like sheep dogs."

The bulls in the Camargue are raised for fighting in the hundreds of arenas throughout the towns and villages in this region of France.

Bound For The Fighting Ring, But Not Death

Ranch owner Renaud Vinuesa has 60 horses and 160 bulls. He says Spanish bulls and Camargue bulls are the last two breeds of fighting bulls in Europe. Raising bulls is his passion, Vinuesa says.

"We look for the most aggressive and combative ones for the ring," he says. "But while a bull destined for the Spanish corrida (bullfight) has one fight of his life, a good Camargue bull can fight for a decade."

That's because Camargue bulls aren't killed in the rings. Vinuesa says Camargue bulls make progress and get tougher as the years go on, because they're extremely smart.

Ranchers like Vinuesa rent their bulls out to fight in the region's many arenas, like the Roman arena in the city of Arles. This amazing, stone-white amphitheater was built 2,000 years ago. It's a bit weather-worn, but remains pretty much unchanged since Romans times.

In a Camargue bullfight, known as la course Camarguaise, the goal of the Camargue matador, or raseteur, is to pluck a ribbon from between the bull's horns. The bulls aren't killed or injured, but it's extremely dangerous for the men trying to get that ribbon. The dozen or so raseteurs, all dressed in white, crisscross the arena, calling out to the creature to attract him. They constantly have to leap up into the bleachers to escape the charging bull. 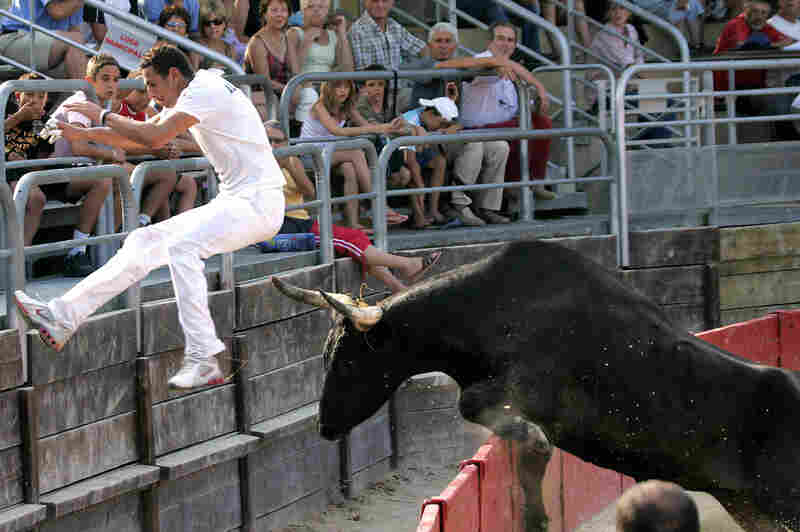 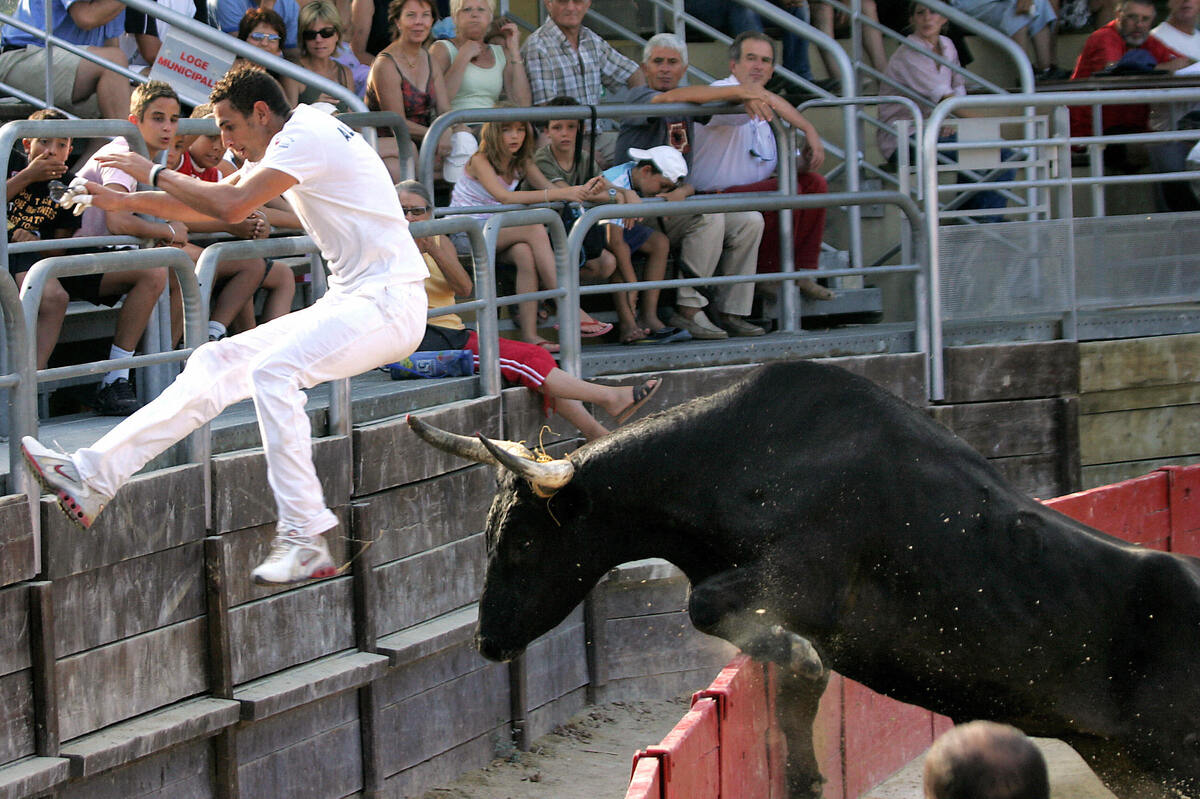 French raseteur Sabri Allouani flees from a bull during a bullfight in Vendargues, southeastern France, in 2006.

Life in the small towns of the Camargue revolves around bulls. Every village has its summer bull festival, with bull-runs through the streets and lots of events in the local, leaf-shaded arenas.

One popular game is Taureau-Piscine, or Bull-Swimming Pool. The game actually features Camargue cows. But with their equally long, sharp horns, they look just like their male counterparts. The game is supposed to help identify the most aggressive mothers for breeding.

Several young men in the ring taunt the angry cow, trying to get it to chase them through a kiddie pool laid out in the middle arena. The confused cows repeatedly jump out of the ring, thinking they're escaping the ridiculous game, but instead they're funneled back into the arena to face their taunters again. Luckily for the cows, their turn only lasts 15 minutes.

Teased And Taunted, Respected And Revered

While the crowd cheers wildly, I can't help thinking how completely pointless and cruel this all seems. But Marie Laconneau and her two small children seem to be having a great time. Laconneau says it's part of their culture and fun to watch. I ask her if it's not a bit cruel.

"No, they're not suffering," she tells me. "They're born and raised for this. And we don't kill them. They go free afterwards."

You can't really argue with that. No matter how you look at it, Camargue bull games are a lot less cruel than the corrida. Still, there seems to be a strange paradox with the way bulls are treated in the Camargue. They're teased and taunted, but also clearly revered and respected.

It's not the bullfighters, but the bulls that are the celebrities here. The great fighting bulls are buried in the marshes, and villages erect statues to them. Every self-respecting Camargue village has its bull statue.

A monument at the entrance to the village of Le Cailar has the inscription, "To Le Sanglier, a great fighting bull." Le Sanglier lived from 1916 to 1933. There's a plaque from the villagers who celebrated the 50th anniversary of his death, and there's a photo of him on the monument.

The bulls that don't do well in the arena do end up on the dinner plate. And a life spent roaming free and eating grass makes for some of the tastiest and most tender meat you'll ever have.

Ranchers here say you won't get rich from raising fighting bulls. But the people of the Camargue say it's more than an occupation — it's a way of life and a passion.