Accessibility links
For Wounded Vets, Climbing Half Dome Only Half The Mission This week, a group of Iraq and Afghanistan war veterans, many with disabilities, marked Sept. 11 by climbing two peaks in Yosemite National Park. Climbing as a team, they say, gives them an opportunity to recapture what they miss about the military: a sense of camaraderie with a shared challenge.

Timmy O'Neill is guiding Steve Baskis through ancient yellow pines that almost touch the sky. They're hiking all day to base camp in California's Yosemite National Park, 2,000 feet up in Little Yosemite Valley.

Taking Baskis by the hand, O'Neill traces the distant ridge of Half Dome, a bald rock rising almost a mile from the valley floor. That's tomorrow's challenge.

Baskis can't actually see the peak. Four years ago, a bomb blast in Iraq took his eyesight. So O'Neill is guiding Baskis along the trail, providing directions and warning him away from steep drops. When they reach the base camp, O'Neill guides Baskis right into the Merced River for a bracing dip.

Much of the nation marked the 12th anniversary of Sept. 11 with the reading of victims' names or moments of silence. But Baskis and a group of 18 fellow veterans commemorated the date in a less solemn way — by climbing two peaks at Yosemite.

O'Neill is a pretty famous rock climber. He's co-founder of an adaptive-climbing nonprofit called Paradox Sports, which helps people with disabilities enjoy outdoor activities. The veterans' climbs of Half Dome and El Capitan are this year's highlights. 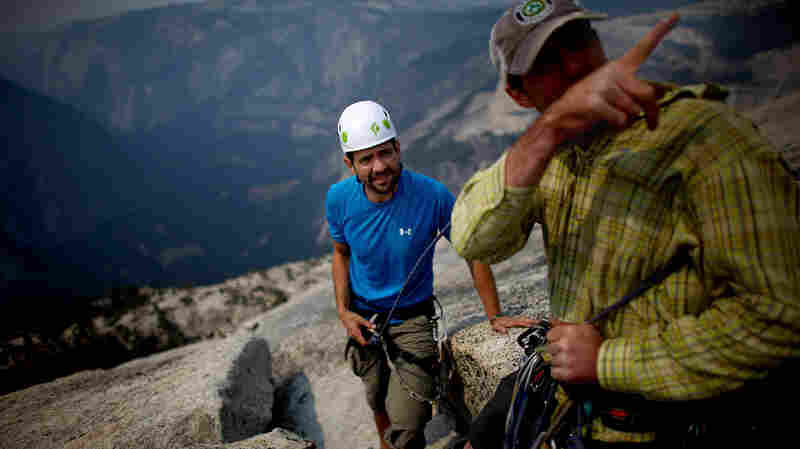 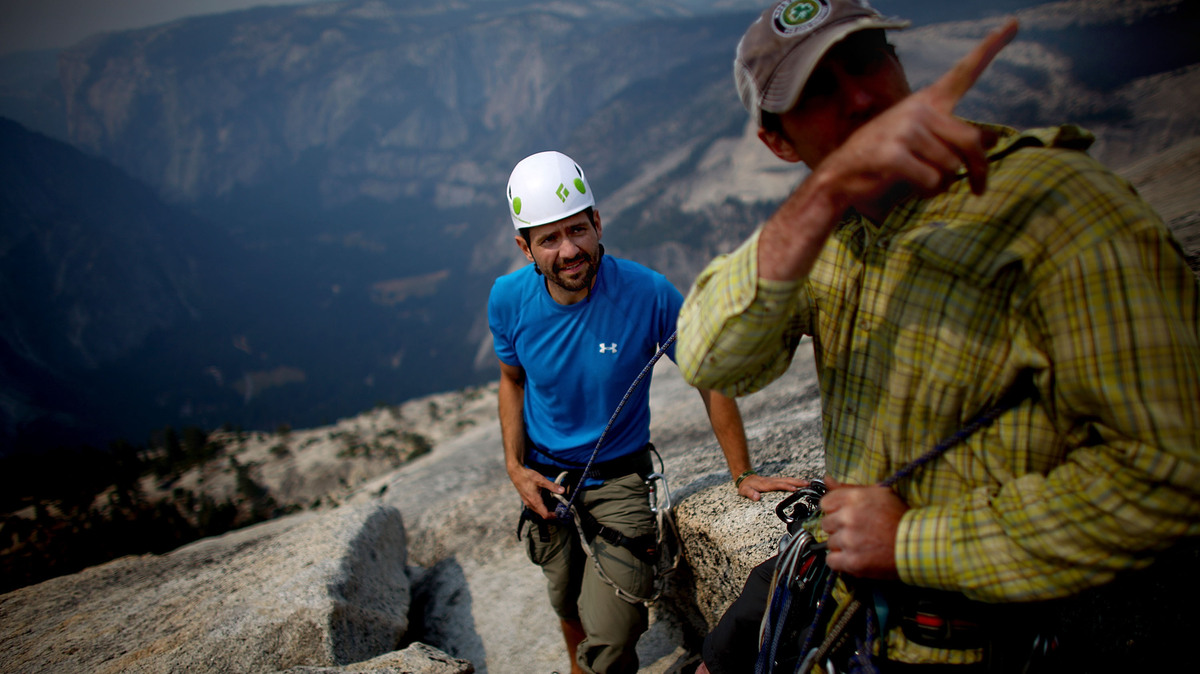 Nate Watson, whose left arm is partially paralyzed from a gunshot wound in Afghanistan, arrives at Half Dome's summit with guide Pat Warren.

"Coming out here and climbing. ... You put together a team, you've got objectives and a mission, maybe summit a peak and to come home alive," Baskis explains. "So you've got gear, you've got friends, teammates."

"I guess I attach it to the military somewhat, but it's camaraderie," Baskis continues. "I feel less disabled when I go do this stuff."

Because he's blind, Baskis has to do this as part of a group — but it's more fun when it's a group of vets.

"It's awesome to go with other veterans who have similar experiences, and to share the wilderness and then share stories ... about how you survived and how you've overcome your injury," he says.

Sharing those stories seems just as important as reaching the peak. Army veterans Nate Watson and Andrew Sullens talk all the way.

Both men served in Kapisa Province, Afghanistan. That's where Sullens got, as he describes it, "blown up" — and lost his right leg. He's hoofing up the mountain on a prosthesis, and he's in a bit of a hurry.

"I don't expect that I'm going to live a long, long healthy life. I've treated myself pretty rough. If I'm gonna get anything done, I feel like I've got a little bit narrower time frame to get it done. When I'm 45 or 50, that stump may not be able to take it. So might as well get it done now."

Watson also got shot in Afghanistan, through his left arm. It left his hand partially paralyzed. Some vets on this trip have less visible wounds — traumatic stress, and brain injuries from explosions. But no matter their wounds, by day's end, each one of the hikers has reached base camp. 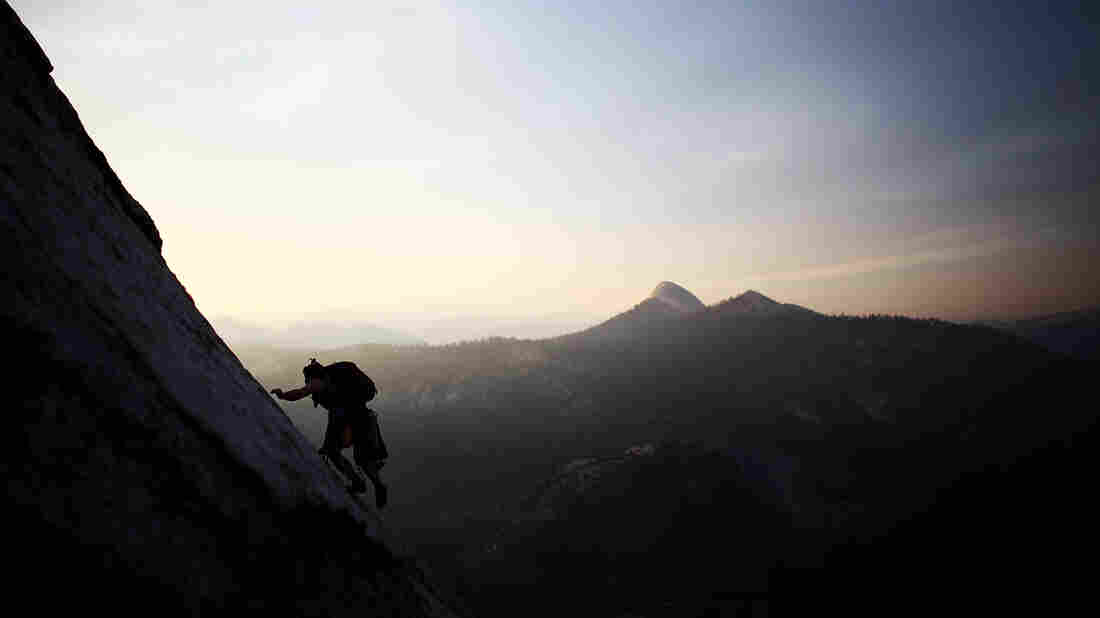 Niels Tietze leads a group of veterans of the wars in Afghanistan and Iraq up the Snake Dike route on the western wall of Yosemite National Park's Half Dome. David P. Gilkey/NPR hide caption 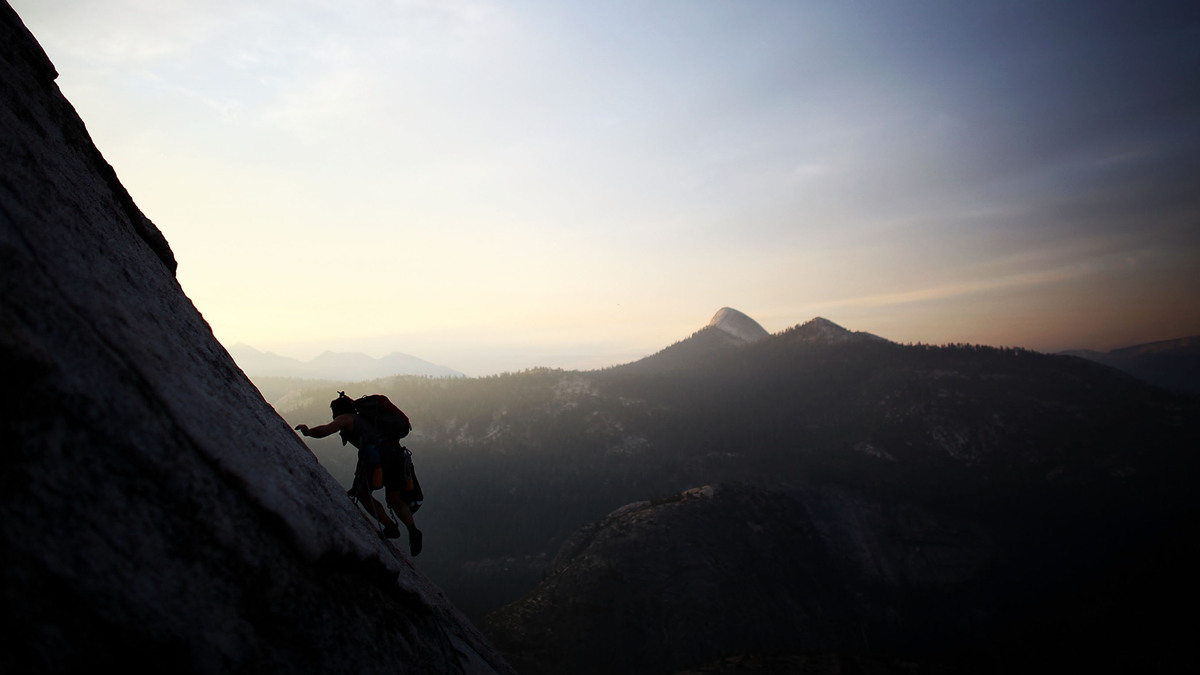 Niels Tietze leads a group of veterans of the wars in Afghanistan and Iraq up the Snake Dike route on the western wall of Yosemite National Park's Half Dome.

The next morning, Sept. 11, the group breaks camp at 3 a.m. Andrew Sullens and Nate Watson strap on headlamps. Allowing for wrong turns in the dark, it's four hours to the west face of Half Dome.

Army Major D.J. Skelton, the other co-founder of Paradox Sports, is climbing with them. During the second assault on Fallujah, Iraq, an ambush left him with one eye and bullet scars all over his body. Sometimes, Skelton says, the harder the climb, the better.

At the base of the slab, everyone clips into ropes. Timmy O'Neill, the professional climber, coaches them.

"You're going to go to your right, and then step down and hang," he instructs Watson. "Perfect."

The vets find tiny hand- and foot-holds in the rock. The cliff reaches straight up more than 1,000 feet overhead. Halfway up, Sullens ties his prosthetic leg to his belt after it nearly slips off from all the sweat. Watson is using his bad arm just for balance — he can't grip with it. Skelton brings up the rear.

Slowly, methodically the men creep up the face of the rock. It takes hours. And then, they've made it. They're at the top — and already thinking about what to climb on Sept. 11, 2014.