Accessibility links
Remote Antarctic Trek Reveals A Glacier Melting From Below After several years planning the difficult mission, scientists successfully drilled through Antarctica's Pine Island Glacier. They were stunned by what they found, and worry global sea levels could be at risk. 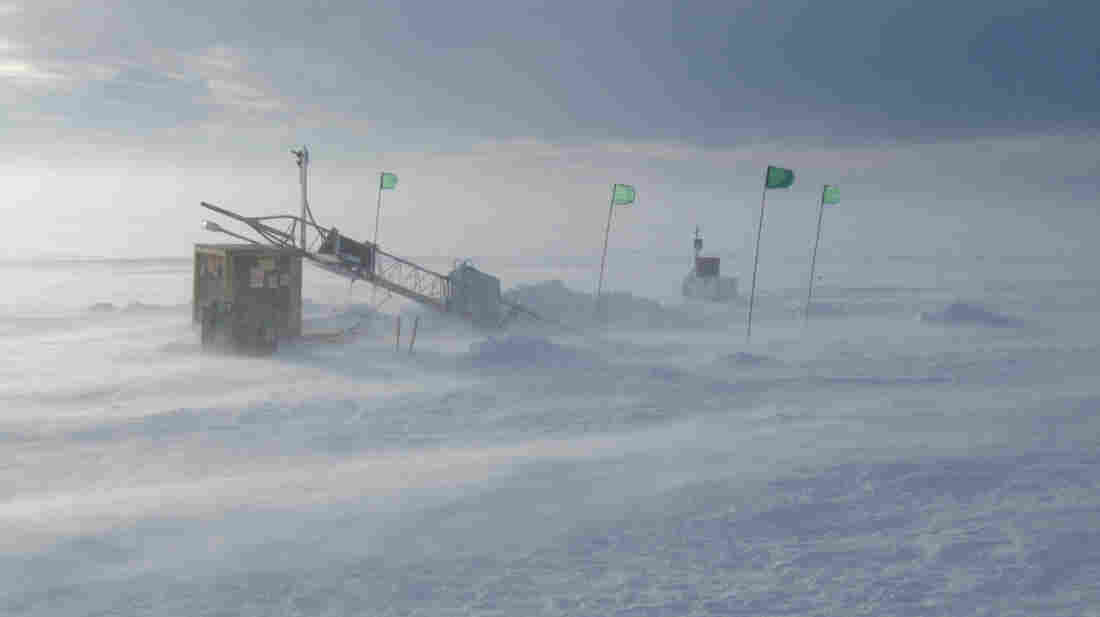 The surface tower at a drill site, under construction during blistering Antarctic winds. Data from instruments, deployed through 450 meters of ice, is transmitted from the tower by satellite back to the Naval Postgraduate School. Image courtesy of Tim Stanton hide caption 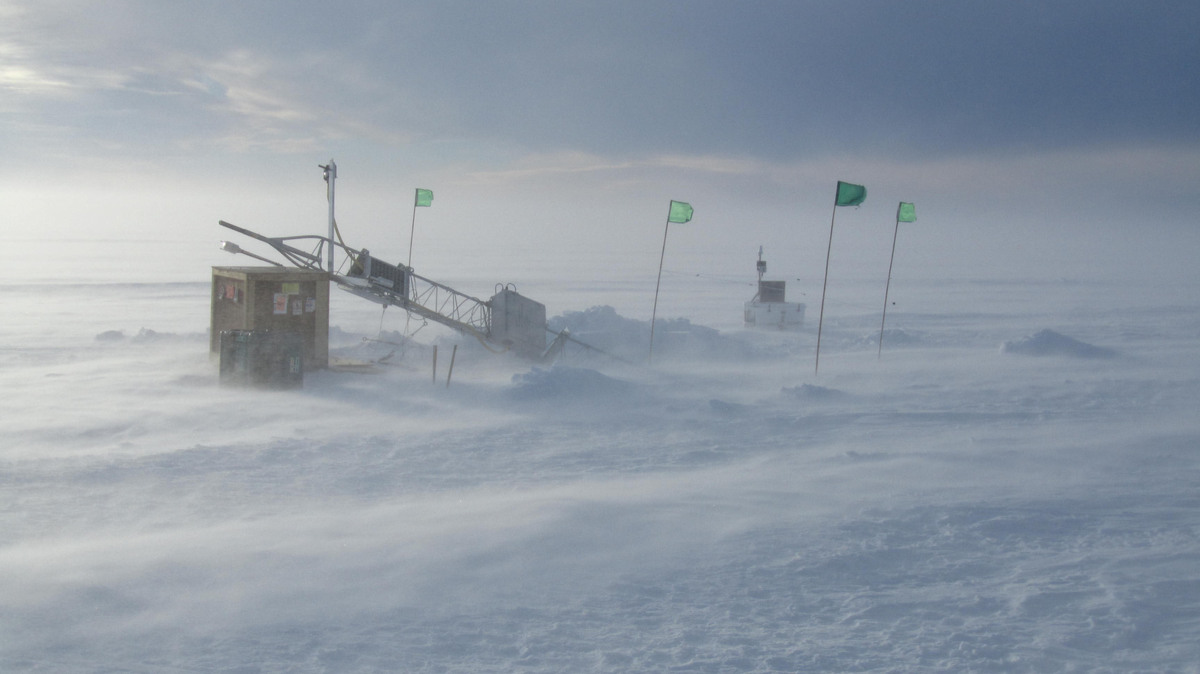 The surface tower at a drill site, under construction during blistering Antarctic winds. Data from instruments, deployed through 450 meters of ice, is transmitted from the tower by satellite back to the Naval Postgraduate School.

Scientists watching Antarctica's Pine Island Glacier from space have noticed with some alarm that it has been surging toward the sea.

If it were to melt entirely, global sea levels would rise by several feet.

The glacier is really, really remote. It's 1,800 miles from McMurdo, the U.S. base station in Antarctica, so just getting there is a challenge. Scientists have rarely been able to get out to the glacier to make direct measurements.

"This was a granddaddy of a problem," says Tim Stanton, oceanography research professor at the Naval Postgraduate School in Monterey, Calif. 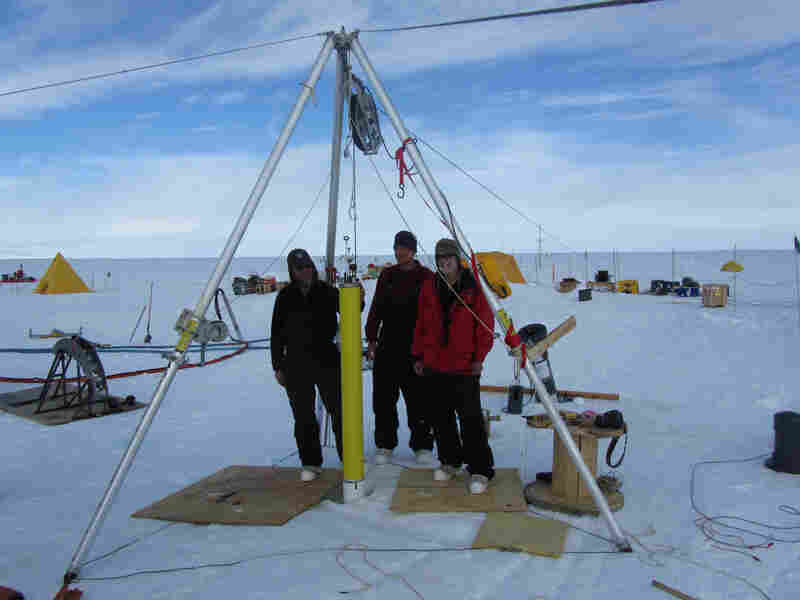 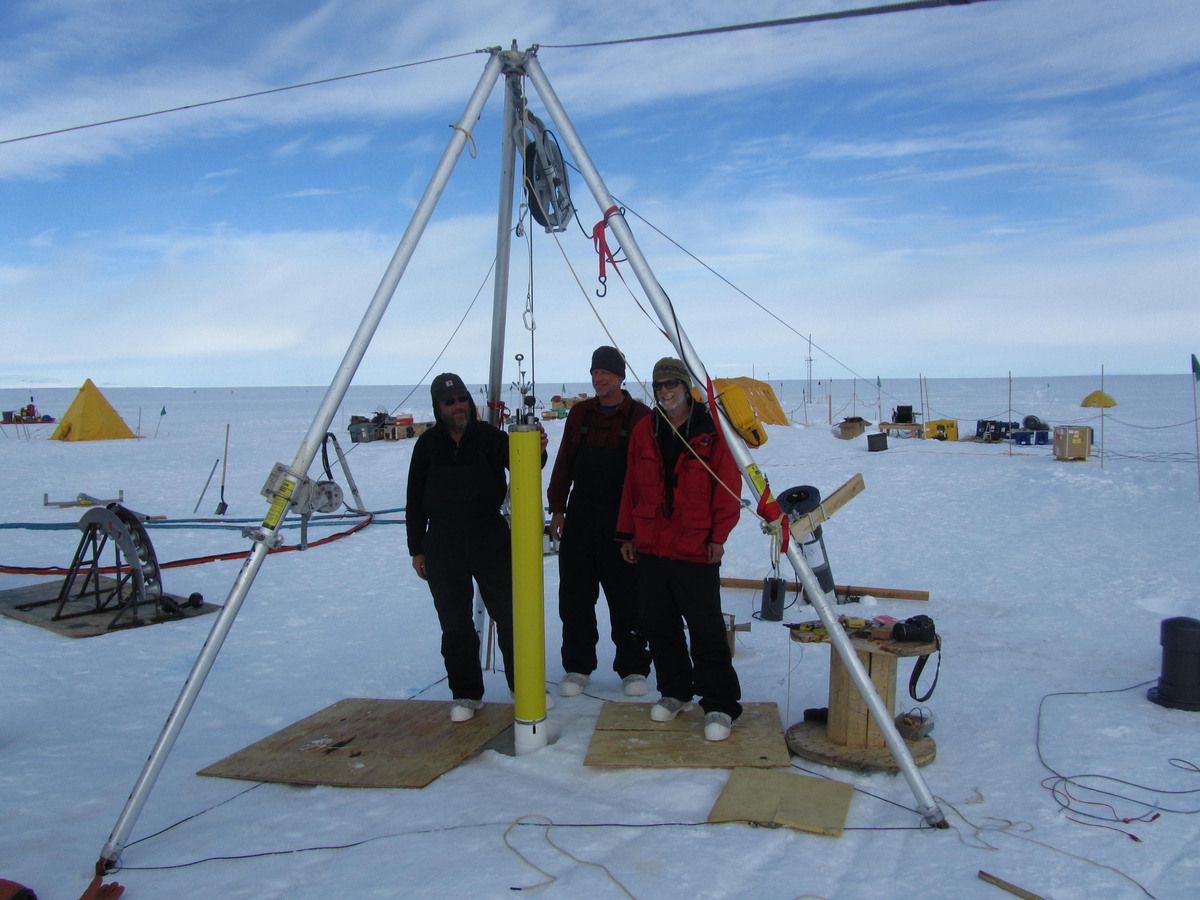 The Naval Postgraduate School team deploys ocean monitoring instruments through a bore hole into the ocean cavity below.

Stanton and about a dozen colleagues spent several years planning this mission, which involved multiple aircraft and remote support camps. In fact, they took four trips to Antarctica before they finally succeeded.

It wasn't just getting there that was hard. Bill Shaw, a colleague of Stanton's, says Antarctica has its own way of serving up trouble.

"You're in your tent sleeping, and you start to hear things flapping and then you wake up to find that all your neatly piled batches of gear are now covered in several feet of snow," Shaw says. "You're going to spend the next several days digging it out and getting going again."

That happened more than once during their seven weeks out on this remote piece of ice. They chose this spot because the glacier here is actually being undercut by ocean water, which flows below it.

The team's challenge was to drill down through the ice sheet, which is twice as thick as the Golden Gate Bridge is tall. Melting those holes involved heating up a metal rod and circulating hot fluid through hoses to the rod, as it gradually ate its way down through the ice.

"Everybody was shlepping hose," Stanton says. "They needed lots of support, so that's what we did during the drilling phase. As soon as the hole was through, we immediately started deploying instruments."

In particular, Stanton wanted to measure the currents flowing right under the ice sheet. He wanted to test how salty the water was, and to find out how quickly the ice was being eaten away by the comparatively warm seawater. They also grabbed a sample of the mud from the seafloor below.

"To see what's down there is quite remarkable, because I can assure you, nobody else on this planet's ever touched the mud before us, underneath an ice shelf like that," he says.

Their instruments showed that meltwater from the glacier was flowing rapidly toward the open ocean, and cutting into the ice above as it went.

"I was surprised by how much like a river this was. It's a river, but instead of eroding a channel, it's melting a channel," Shaw says.

And it turns out that channel is melting very fast. As they report in Science magazine, the ice in that channel was disappearing at the rate of 2 inches a day. Stanton said their measurement is consistent with what scientists had inferred from satellite measurements.

"Don't forget, this happens day in and day out," he says. "We saw no changes over the 35 days that we were reporting on in this paper. It's a phenomenally high melt rate compared to what we observe in the Arctic, for example."

At the moment, it's contributing a tiny amount to rising sea levels. But the melting has been accelerating in recent years, and if it keeps accelerating, in the very long run, the Pine Island Glacier could add several feet to global sea levels.

The results are sobering, but Stanton says when the drilling system finally punched through the ice and he was able to position his instruments, he felt he'd conquered this grandaddy of a problem.

"That was remarkably satisfying," he says. "It really had been a long, long road."

With luck, those instruments will continue to run for another two or three years — and send their data back via satellite to Stanton and his colleagues, in the cozy confines of their labs.