Accessibility links
Debate Revs As Decision Stalls Over Oil Pipeline From Canada Five years ago, a Canadian company proposed building the Keystone XL pipeline to connect Canada's tar sands oil development with the big U.S. refineries on the Gulf Coast. The southern stretch of this pipeline is nearly finished, but the northern stretch is still under study. 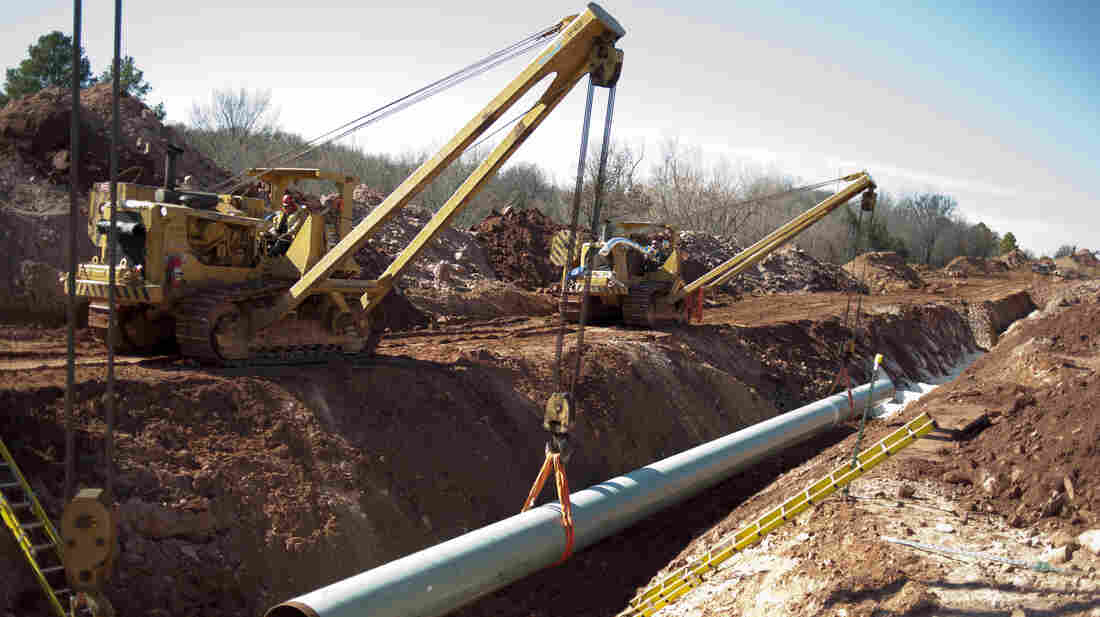 A 60-foot section of pipe is lowered into a trench during construction of the Gulf Coast Pipeline in Prague, Okla., in March. The Gulf Coast Pipeline, a 485-mile crude oil line, is part of the Keystone XL project and will run from Cushing, Okla. to Nederland, Texas. Although this southern stretch of the pipeline is nearly finished, the northern stretch is still under study. Bloomberg via Getty Images hide caption

Five years ago this week, a Canadian company proposed building a pipeline to send heavy crude oil from Alberta to U.S. refineries. Although the Obama administration's answer on the Keystone XL pipeline is not expected anytime soon, politicians in Washington and Canada are ramping up the pressure for the project, while environmentalists are pushing hard against it.

The intense focus on the decision reflects the fact that the Keystone XL pipeline has become a proxy for the larger debate on climate change emissions. The heavy crude the pipeline would carry has a substantially bigger greenhouse gas footprint than conventional crude.

This summer, President Obama said he wouldn't approve the Keystone XL if he determined that it would exacerbate climate change.

Still, many politicians in the U.S. and Canada tout Keystone as a job creator and crucial tool for making North America energy independent.

A new measure being debated in the Senate would declare the Keystone XL in the national interest, although it would not force the president's hand.

The measure hasn't come up for a vote yet, but its prospects are good. Some Democrats have joined Republicans as co-sponsors.

"And why we would not build this pipeline to make sure this oil from a great partner is refined in the U.S. rather than focusing on oil in countries that do not like us, makes no sense to me," Sen. Mark Begich, a Democrat from Alaska, said in a Senate debate last week.

The 875-mile pipeline from Canada would end in Nebraska. But it would hook up with pipelines that stretch to the Gulf Coast. The southern portion of the original Keystone XL proposal is 90 percent finished already. It stretches from Cushing, Okla., to the Gulf Coast and did not need presidential approval because it does not cross an international border.

Most of the oil flowing through the Keystone would be heavy crude from Alberta, Canada. But light crude from the Bakken formation in Montana and North Dakota could also flow through it.

Sen. Heidi Heitkamp, a Democrat from North Dakota, defends Canada's production of tar sands oil. "This is not some rogue country that doesn't have ... environmental standards," she says.

Oil producers in Alberta do pay a tax for their carbon pollution, which helps fund pollution control equipment. And the oil companies are researching cleaner technologies.

Oil from tar sands has a higher greenhouse gas footprint than conventional crude because it takes so much energy to get the tar sands oil out of the ground and refine it so it can go through a pipeline.

According to the U.S. Environmental Protection Agency, Canadian tar sands oil can lead to 30 percent more greenhouse gas than conventional oil, if you count emissions from all the products that come from the oil.

The EPA also warns that spills of tar sands oil are much tougher to clean up. A spill of this heavy crude into Michigan's Kalamazoo River three years ago is still being cleaned up.

Sen. Barbara Boxer, a Democrat from California who heads the Senate environment committee, has criticized her colleagues for failing to see that the pipeline is not in the national interest.

"Now you'd have to be asleep for 10 to 15 years to not believe that carbon pollution is dangerous to the planet," she says.

Earlier this year, in a draft environmental analysis of the project, the U.S. State Department concluded that Canada will develop its heavy crude with or without Keystone, so the pipeline wouldn't have a big impact on greenhouse gas emissions.

Energy analyst Jackie Forrest, from IHS Cera, says she agrees that rejecting the pipeline would not have a big impact on greenhouse gas emissions.

Forrest, the senior director for global oil at the business information company, says she expects Gulf Coast refineries will use heavy crude from Venezuela or somewhere else if they can't get it from Canada. And those heavy crudes contribute similar greenhouse gas emissions.

These refineries have invested in expensive equipment to refine the heavy crude oil, and it costs less than lighter crudes. Forrest says it doesn't make business sense for these refineries to shift to light crudes.

"They wouldn't be able to produce as many refined products and make as much money," she says. "For them to get the maximum return, they need to take the fuels their refineries have been built for."

TransCanada says it originally proposed the Keystone XL five years ago because its customers, oil companies, wanted a replacement for Venezuelan crude for those Gulf Coast refineries.

"This product is needed by the refineries to create the kind of products that we all rely on every day," says Shawn Howard, a TransCanada spokesman.

But environmentalists don't buy any of these arguments. A group called 350.org has planned 150 Keystone protests in 45 states on Saturday.

"So if you ask me, tar sands oil is exactly the kind of dirty energy we can no longer afford," Redford says in the ad. "It may be great for oil companies, but it's killing our planet."

Oil industry insiders worry that because of all the pressure, the Obama administration will let the decision date keep slipping. The State Department stresses that there are several steps remaining after its final environmental analysis comes out, and that won't be until late this year or next year.

Canadian Natural Resources Minister Joe Oliver was in Washington, D.C., last week meeting with Energy Secretary Ernest Moniz. Oliver says he followed up on the letter he wrote to the secretary about many issues, including how important Keystone is to Canada.

"Whenever I meet with U.S. officials, I raise the Keystone XL," Oliver says. "And the Prime Minister [Stephen Harper] raises it with the president when they meet, which they did most recently at the G-8 meetings."

Oliver says he hopes that Canada and the United States will find ways to work together to reduce greenhouse gas emissions from the oil and gas industry, and get the Keystone XL built so that North America can be energy independent.